Pinyon Ridge is probably one of the more obscure San Gabriel summits on the Sierra Club Angeles Chapter’s Hundred Peaks Section (HPS) list. Although surrounded by higher mountains to its south, Pinyon Ridge has commanding views of the high desert north of Los Angeles. On clear days, sweeping vistas of the coastal mountains, the Southern Sierra, the Death Valley ranges, and even Mt Whitney can be had. To the south, Baden Powell dominates the skyline. Minor by even San Gabriel standards, Pinyon Ridge makes an excellent warm-up hike for some of the tougher Wrightwood area peaks such as Ross Mountain or the Baden-Powell to Throop Peak traverse.

While being a relatively insignificant ridgeline in the San Gabriel Mountains, the Pinyon Ridge placename has existed for over a century, first identified on a USGS survey in 1901. The “peak” appeared on the original HPS list compiled in 1946 and is approximately 4 miles long, anchored by the high point on the east end. Forest Road 4N56 runs the entire length of the ridge top and can be seasonally accessed using a suitable vehicle. Access to 4N56 is either from Vincent Gap via Forest Road 3N26.2 or roughly 4 miles past the town of Big Pines using Forest Road 4N12. Check with the Big Pines Information Station (760.249.3504) for conditions before attempting these typically gated roads. 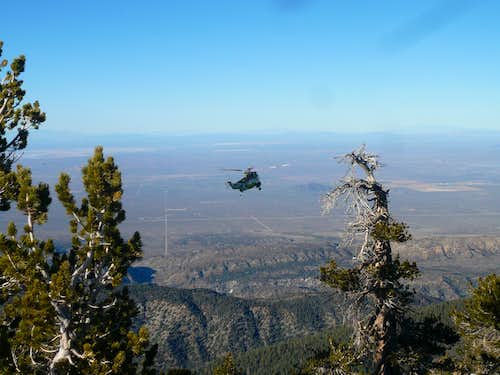 Pinyon Ridge shown running along the bottom of the photo Baden Powell from the high point of Pinyon Ridge (Jan 09)

There are several roads and routes that can be used to approach or hike Pinyon Ridge. Two of the four described below can be driven if the gates are open.

Northern Approach: This is probably the preferred hiking route as it’s the shortest of possibilities. The HPS website describes the start of the hike at N4 mileage marker 6.72, about 5 miles west of Big Pines. This marker is next to the entrance of a YMCA camp so don’t drive into the property or block access. The northern approach follows either a firebreak on the ridge spur just west of the camp or a trail that that starts after walking through the camp. Permission is required to enter the camp and the trail eventually hits 4N56 just before it reaches the top of Pinyon Ridge. The firebreak can be accessed after working upwards (SW) a couple of hundred feet through brush or by starting ¼ mile further west on N4. The firebreak is a straight forward hike of less than ½ mile and ends at the summit.

Southern Approach: From the Vincent Gap parking lot, head north up the dirt road (3N26.2) past a gate. Make sure to take the uphill (right) branch just past the gate as the lower one leads to Big Rock Creek. In roughly a mile, take the road coming in from the left. In about another mile (with some elevation loss), take the right branch; the left branch leads down 4N55. In about ¾ of a mile, Forest Road 4N12 comes in from the right. Stay left as the road makes its way up to the top of the ridge in another ½ mile. The summit cairn is on the gentle rise to the right (north) of the road.

Eastern Approach: From just west of Jackson Lake off N4, Forest Road 4N12 heads west. In about 2.5 miles, Forest Road 4N56 comes in from the left. Turn right and follow the road as it makes its way up to the top of the ridge in another ½ mile. The summit cairn is on the gentle rise to the right (north) of the road.

Western Approach: There are several variations of a western approach that all amount to gaining the ridge and 4N56 some place west of the summit. The shortest route is probably up another northern aspect firebreak that is reached 1.75 miles west of the YMCA camp on N4 (just before getting to Largo Vista Rd.). This route is about ¾ mile up the firebreak and a little less that 1.5 miles east on 4N56. Some of the land that may be used to access Pinyon Ridge could be private so caution and courtesy should be exercised.

Several campgrounds are in the immediate area and can be reserved through www.recreation.gov. In heavy snow years, the ridge and the local road may be covered in snow and additional cold weather gear (snowshoes, crampons, ice ax, chains for the car) could be required. Check for current weather.

This stupid little hummock is covered in trees with almost no views possible from the summit. Your misrepresentation of this so-called peak is sure to lead others astray. Unless you are doggedly determined to finish the HPS list, this is one to be avoided. That and the fact that I got lost trying to reach the summit may have something to do with my aversion... :-)

Re: Sweeping vistas my ass

I have to say, I learned much on my "enhanced prose" (read over-exaggeration") from your excellent trip reports. Yes, the views may not be as sweeping as some other places but I certainly didn't get lost. And you're probably right, my recollection of views was mostly looking at Baden Powell and coming down the firebreak. It still makes a good warm-up peak unless...see your last sentence.

As of June, 2011 SR 2 is completely open. However, closures for winter and subsequent road damage may again be enforced in the future.