A note at first 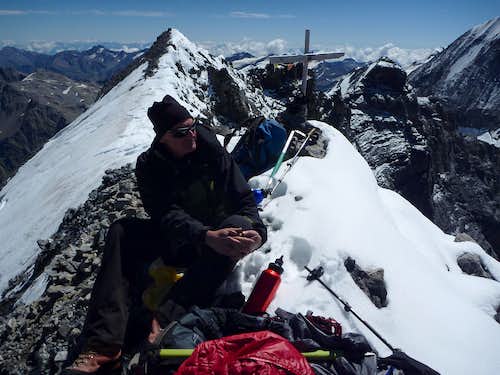 Resting on the summit of Monte Zebrú

In my old guide book of Ortler Alps the normal route to Monte Zebrù is rated as an “easy glacier hike”. In august 2015 three colleagues and I intended to do the traverse of the 13 peaks (“La Traversata delle 13 Cime”) and I thought it would be a good idea to climb Monte Zebrù Normal Route for an easy start and to get acclimatised. We had to learn that the route had become more difficult due to glacier retreat. So I think it is time to tell a new story about the former “easy glacier hike” and to update the somehow “older” information of user Silvio1973. I will update the route from Rifugio V Alpini which can be considered as the normal route. The route from/to Berghütte / Rifugio Borletti, which unites half way through with the Quinto Alpini route at Ortlerpass, is still in use. I do not know the section Berglhütte - Ortlerpass and therefore make no update for that part. 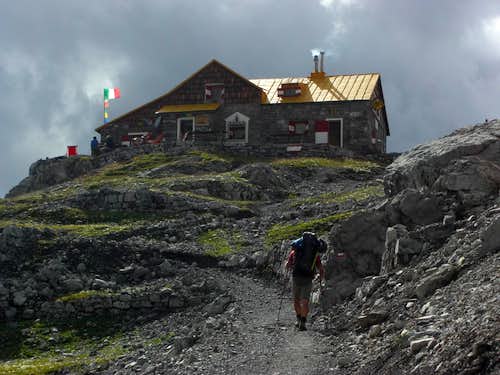 The valley trailhead for Rifugio V Alpini is Niblogo parking area at the village of San Nicolo / Valfurva. Leave Bormio in the direction to Gavia pass / Santa Catarina di Valfurva. At San Nicolo follow the signposts for “Rifugio V Alpini”. Follow the Valle Zebru forest road starting at the parking area, passing by Rifugio Campo until you arrive at Baita del Pastore. Follow then the left hand supply road up the south slopes until you arrive at Rifugio V Alpini (about 4 hours). 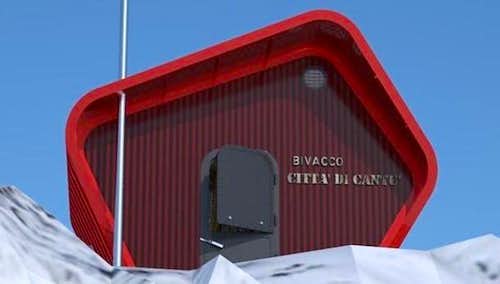 The valley trailhead for Berglhütte / Rifugio Borletti is Trafoi. Use road number SS 38 from Bormio or Meran to reach Trafoi on the Stilfser Joch pass road. South of Trafoi use the paved road branching off from the pass road to the east. There is a huge parking area. Follow the forest road to a sanctuary, cross the Trafoi creek and ascend on trail number 15 to the hut (about 1,5 hours).

Start the climb from the hut. The glacier (Unter Ortler Ferner) starts at 2,500 m, about one hour of hike from the hut. At this point follow the glacier up on the left trying to avoid an endless number of crevasses; at 3,100 m the glacier is flat again. Head the Ortlerpass direction SE and cross the pass (about 45° ice). Once on the top (3,353 m) head for the shelter "Bivacco Città di Cantù". There you might decide to leave here the not essential gear and climb lighter the last part of the route. (text of user Silvio1973) From the Hochjoch follow closely the new route to the summit described below, avoiding the now huge bergschrund in the uppermost part of the old route!.

Take the trail north of the hut and ascend to a kind of col roughly 100 m above the hut. There is a trail junction with marks on a rock: take the left hand trail which traverses in some ups and downs to the north and soon disappears amidst glacier polished rocks. Follow some cairns until you reach the southern part of Vedretta dello Zebrù which comes down south of Monte Zebrù. Traverse this glacier, navigating around open crevasses, to the north and descend to reach the moraines and talus fields below the lowest part of the Monte Zebrù west ridge. There is a small plain between the southern and northern part of Zebrù glacier, descend to this plain where a foot track starts ascending the morain slope of Zebrù glacier, northern part. Zigzag up this foot track; there are some cairns and wooden stakes showing you the way. The foot track ends between 3000 m and 3100 m at a not so steep part of the glacier.

Enter the glacier here and ascend straight up to the next steeper part. Ascend this steep slope from lower right to the left. From there on aim to the now visible Ortlerpass right of Thurwieser Spitze and Eiskogel. There are nasty crevasses to your left and even nastier ones to the right. Turn right below Ortlerpass to navigate round these nastier crevasses – in august 2015 there was a completely collapsed huge glacier hole with a width of more than 30 m – and ascend the north side of the upper Vedretta dello Zebrù to the now visible Hochjoch, the col between Monte Zebru and the south ridge to Ortler. Keep your eyes out for more crevasses!

The bivvy shelter at Hochjoch, Bivacco Città di Cantù, was reerected newly in 2016 by the Citta di Cantu section of the Italian Alpine Club; it has shelter for 10 mountaineers. In former times you had to ascend the steep glacier and ice covered north slope of Monte Zebru, avoiding the Sulden side of this slope, and to enter the uppermost west ridge after a traverse of the bergschrund. This is no longer possible! The bergschrund is nowadays wide open and builds a 10 m high perpendicular ice wall.

To reach the summit traverse the north slope above Hochjoch col to the west on an ice and glacier ramp between the upper northern rock face and a lower rock face above the Vedretta dello Zebrù. Aim for a steep snow or ice slope which comes down from a shoulder in the west ridge of Monte Zebrù, west of a steep and forbidden looking, near perpendicular rock face of the west ridge. Climb over the bergschrund where it is possible and ascend the steep ice or snow slope to the shoulder. Keep as long as possible in the snow or ice (belay with ice screws recommended when icy!) to avoid the frail rocks on the right hand side (in the ascent sense). 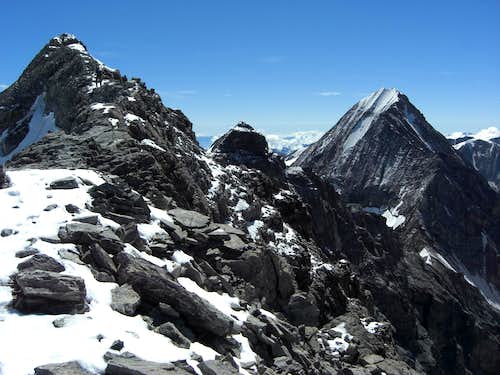 Upper west ridge to the summit with Königspitze

The mountain is situated in a wild environment inside Parco Nazionale dello Stelvio. No particulary restrictions in hiking and climbing.  There is no entrance fee but the park as a whole with its fauna, flora, rocks and waters is strictly protected. Overnight stays are only allowed in huts, bivvy shelters or in tents in the immediate vicinity of the huts - shelters. Please respect any rules indicated on information panels at the boundaries or inside the park. There are many rare plants and animals within its boundaries.

The normal route from Rifugio V Alpini is more difficult than it was in former times due to glacier retreat and the wide open bergschrunds. The upper part of the glacier ascent to the west ridge can be icy and then difficult (slope of about 50 degree inclination). Ice screws, ice axe, crampons and a good practice with those can help a lot. The less snow there is in summer the more crevassed is the Vedretta dello Zebrù.

You need a rope (we had a 30 m half-rope for two people), harness, some carabiner and draws, slings, an ice-screw per person, ice-axe, crampons and a helmet (as an option). The same gear is necessary for the ascent from Berglhütte.