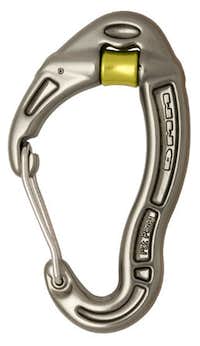 “What’s the heaviest thing on your rack? Answer: your rope!”

This is the curious, lateral thought process that occurred to Fred Hall as he sat pondering the next breakthrough in climbing equipment design. Fred is our resident gear designer and all round genius; he has been a director of the company since the early days and has played a key role in the design of several important and innovative products (such as the Mamba quickdraw, the Predator ice axe). We could write a book about Fred’s contribution to modern climbing gear, but before we get carried away, let’s get back to ‘the heaviest thing on your rack’ conundrum.

The frictional drag that a rope can exert on you, particularly on a long and winding pitch, can be so strong as to actually make upward progress almost impossible. Sure, if you’ve had the foresight to extend that crucial runner below the roof with a long sling, you’re halfway there, but once you’re trucking up the final headwall, forearms dangerously pumped, and a few more runners placed here and there as the line of the route twists about, it feels like you’re dragging an elephant behind you.

Fred’s answer to the epic rope drag scenario was to look at the hardware end of the system. He decided to fit a pulley roller into the apex of a biner. A simple, but extremely effective solution to an age old problem. In practice, a Revolver placed at changes of direction on a long pitch can prevent that heavy harness feeling.

The story doesn’t end there though: during the prototype phase Fred struggled to get the weight of the biner down to an acceptable level. However this in itself prompted yet another innovation: the I-Beam construction, a method by which we can significantly reduce the weight of a biner yet maintain its strength. This has since been rolled out to all of the new DMM biner designs.

The Revolver also has a further interesting function – it can be used in rescue situations as a pulley. And for added security, there are locking versions available.

We’re not suggesting that you should climb exclusively on Revolver quickdraws, far from it, but it does make sense to have at least a couple on your rack.

Recommended Use: sport climbing and SELF RESCUE

Self Rescue
These are too heavy and expensive to use as a part of your rack, but they are wonderful in certain self rescue situations. The pulley would be a make-or-break tool if you ever need to haul your injured partner on a climb. Also, this is very useful in crevasse rescue as it could replace a heavier pulley. It would be worth buying ONE of these for a rescue kit.