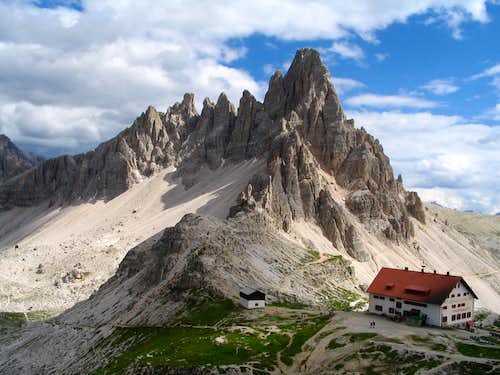 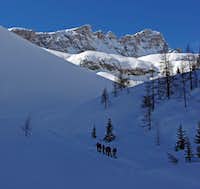 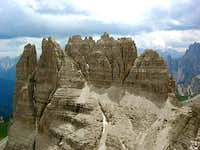 All right, all eyes are turned to Tre Cime / Drei Zinnen, but should because of that Monte Paterno / Paternkofel be neglected? It's a beautiful mountain, having also a rich history - not so much a climbing one but a more sad one - from the World War I. Paternkofel rises north-east of Tre Cime di Lavaredo / Drei Zinnen and belongs to a broader group of Sexten Dolomites. The mountain rises only a few hundred meters from the high plateau, but is beautifully shaped. It has 3 strong ridges (N, S, E) and over all of them three nice and popular ferratas go.

The mountain is popular because of its famous view on Drei Zinnen and because of its short ascent. It is for hikers with good experience in rock so they can overcome steep sections, secured by pegs and steel ropes. In Paternkofel's walls there's probably not many harder climbing routes.

The first ascent was done on September 11th, 1882 by Franz Innerkofler and E. Kuenigl, they reached the summit over Gamsscharte. The N-NW ridge was first ascended in 1986 by guides S. and C. Innerkofler, with E. Biendl.

On the north the small Paternkofel / M. Paterno group starts on the saddle, called Toblinger Riedl / Forcella di Toblin, 2405 m. The N-NW ridge goes from the saddle just on top.

Longer is the E ridge, which starts on Buellelejoch / Forcella Pian di Cengia, 2522 m. The ridge first rises with a group of towers, called Boedenknotten / Crode dei Piani and then after Forcella dei Laghi continues sharply towards the top. Just before the summit there's the famous Gamsscharte / Forcella di Camoscio.

Between the N-NW ridge and the E ridge a steep wall is falling some 250 m down on the plateau called Boedenalpe / Alpe dei Piani. There are a couple of nice lakes (Boedenseen / Laghi dei Piani), allways mirroring the walls and the summit of Paternkofel / M. Paterno.

The S ridge is shorter. It steeply lowers down to Passportenscharte / Forcella Passaporto. But beyond this saddle a nice fortress rises. It is called Passportenkofel / Croda Passaporto, 2719 m. The mountain is formed of many towers and is rarely climbed. On the SW it attaches to the Drei Zinnen / Tre Cime group on Paternsattel / Forcella Lavaredo, 2454 m.

The walls falling down from the N-NW ridge and the S ridge are steep and rocky, but short. Below them the broad touristic promenade goes.

Between the E ridge and Passportenkofel / Croda Passaporto there's a basin called Ciadin del Passaporto. From the SE an unmarked path enters it. 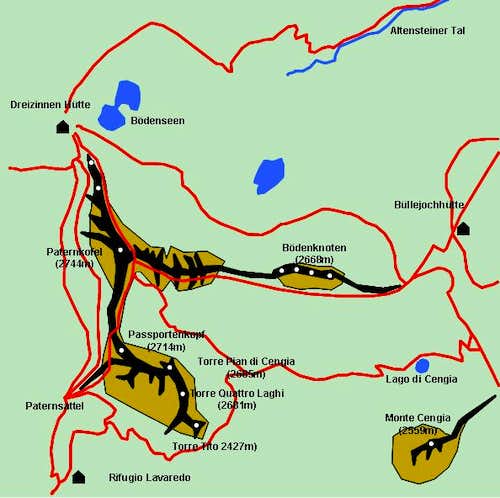 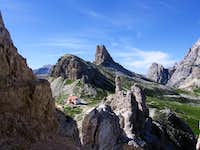 marlenka - From the northern ferrata

Three ferrattas climb the mountain, each along one of the main ridges. All three meet on Gamsscharte/Forcella di Camoscio (notch), cca 2650m, from where there's only a jump to the summit. But this jump can be tricky, as just above the notch there's always a rush hour.

The bottleneck is some 15 meters high vertical rock, which is well protected and can be climbed by the majority of hikers in a free manner, but as some use rope, besides delays, there's also a constant danger of falling stones. 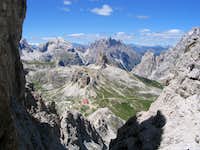 turistoalpinista - On the N route

starts at Drei-Zinnen-Huette, 2405m, goes by the north ridge, through galleries (from the WW1) and over open walls to the Gamsscharte. 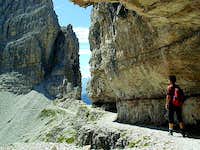 starts at Paternsattel/Forcella Lavaredo, 2454 m (between Paternkofel and Drei Zinnen), ascends the south ridge (reached on Passportenscharte/Forcella Passaporto) and goes to the Gamsscharte along it on the other (eastern side). 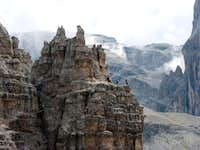 Bor - On the E route

starts at Buellelejoch/Forcella Pian di Cengia, goes first on the southern side of the east ridge and later over many notches on the ridge very attractively to the Gamsscharte.

So, after reaching Gamsscharte/Forcella di Camoscio, we now have only this short wall to climb and above it some 50 meters of scree scramble.

Flex - On the N-NW ridge

A Glimpse into History 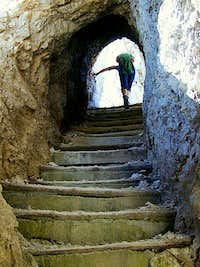 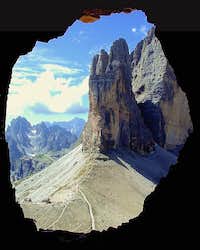 From a WW1 cave

Paternkofel saw its most sad and also brave days during World War I. As all three routes follow military routes, many relics from that time can be even now seen: caves, tunnels, guns nests. You need only a little imagination to see soldiers fighting on these rock needles - no pause allowed, for many years, in summer and winter.

The most prominent victim of Paternkofel was the famous mountain guide and climber from Sexten, the legendary Sepp Innerkofler (1865-1915), who lost his life during a summer attack on Italian summit positions. A group of 40 carefully chosen soldiers was approaching the summit from the north. Early in the morning, a patrouille, led by Sepp tried the summit ascent through a chimney. Sepp was climbing as first. He was spotted by Italian soldiers and shot. Not only Austrians, but also Italian soldiers (many of them were local climbers) were horrified, realizing who was shot. Innerkofler's body was put to rest on the summit of Paternkofel / Monte Paterno and was taken in Sexten only after the war.