The Pilastro Priolo is a superb classic route located in the sector of Gran Diedro, on the left part of the West wall. This face is easily visible from the road leading to Passo Giau from Cortina d'Ampezzo.  It's a satisfying and fine route running on the stunning vertical and wide pillar on the left wall of the "Grande Diedro", located on the left part of Lastoni di Formin West wall. It is a route with compact rock developing at first along a succession of dihedrals on the right of the edge. The upper part, more airy and with greater difficulty,  runs on the left of the edge and in the last part still on the right up to the summit.

The starting point to approach the route is Passo Giau m. 2236, one of the highest pass in the Dolomites, offering a breathtaking view over the majority of the Eastern and Western Dolomites. Passo Giau is situated at 16 km. from Cortina d’Ampezzo m. 1230 (Belluno province), the main resort in this area. Cortina can be approached from Belluno or from Bolzano:

- Road approach from Bolzano: take the Brennero Motorway, exit to Bressanone and then follow the road SS 51 along Pusteria Valley, reaching Brunico and Dobbiaco; from Dobbiaco follow on the right Val di Landro, reaching Carbonin m. 1432. At the fork road in Carbonin turn to right towards Cortina d’Ampezzo.

– Follow the road SS48 to Falzarego Pass and in Pocol turn to left following the Road SP638 to Passo Giau (16 km. from Cortina). 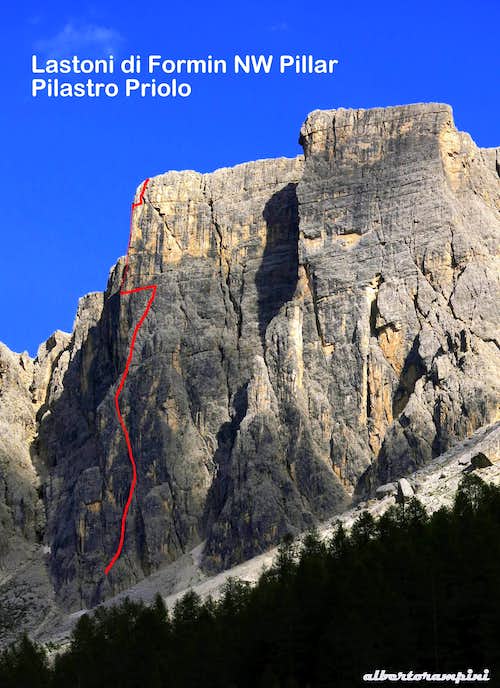 A stunning classic climb. The route offers some of the different styles of the climb in the Dolomites, as dihedrals, walls, cracks and chimneys.

Walking approach
A few hairpin bends before Passo Giau, coming from Cortina, you find on the left the signpost of the path 436 to Forcella Giau. Park the car and take this path. When you exit the woods and pass the pastures, ignore the main path and head towards the wall going up to the left. Once you get to the scree slopes that descend from the wall follow a trail that leads up to the pillar. Climb the easy rocks at the base, reaching a slab cut by slanting cracks. A sling on a hole is at the starting point of the route and of another sport route. 1 hour from the road.
L1 - Climb the chimney on the left with a jammed boulder, then some good slabs on the left and belay on a large terrace (keep yourself on the left of a yellow roof and on the right of a black dihedral). Stop on 2 pegs,  IV +, IV,  30 m
L2 - Climb a big blade to the right and then enter the black dihedral with a large crack. Higher up the dihedral becomes easier and you leave it to follow a chimney on the left. Belay on a terrace with a hole, V and IV, 45 m.
L3 - Climb the yellow crack on the left. Uncomfortable belay on two pegs, III+, IV,  25 m.
L4 - Take the dihedral-crack of gray compact rock formed by a detached pillar to the right. Some delicate passages, no pegs. Belay on a hole, IV and IV+, 25 m.
L5 - From the belay climb at first some easy rocks, then a yellow dihedral with a peg at the beginning. Near a hole you exit to the right and up a solid slab. Belay on 2 pegs,  V and V + in the dihedral, 40 m 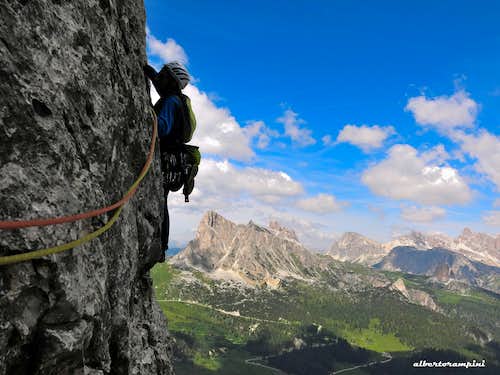 Exposed traverse on Pilastro Priolo, Lastoni di Formin
L6 - Take the obvious blade slanting right.   Belay on a peg or a hole above. IV,  IV +, 20 m
L7 - Now it begins a long traverse to the left and slightly downhill in the last part with some delicate moves that allows to get the left (North) side of the ridge, IV,  V+, some steps of VI, 20 m
L8 - Climb a dark compact slab and belay on the right on 3 pegs,  IV, 15 m
L9 - To the right on a narrow ledge, then climb the crack on the left and at another ledge reach the base of a yellow dihedral.  Belay on a peg, IV,  IV+, 20 m
L10 - Enter the dihedral and climb it, by pass an overhang and belay on some pegs, IV+, V+, VI-, 30 m
L11 - Climb  the overhang, then traverse to the right on a yellow slab, pass a small ridge and enter a chimney leading to the summit. Belay on an outcrop, VI, V, IV, 35 m
Descent

There are two ways to descend:

- the shortest one is walking to the right (South) following some cairns towards the summit of Spitz de Mondeval (the highest point of the Lastoni di Formin) to get the starting anchor of the first one of 3 abseils (3 x 25 meters) within a large gully on the left of the summit cairn, getting the base of the wall (facing South) overlooking the Mondeval meadows. From here walk up to get the Forcella Giau, then take the path to Passo Giau, At a junction descend to the right to get the road.

- a longer way without rapping is by walking on Lastoni di Formin normal route, a nice hike across the karst tableland towards the Forcella Rossa, where a path descents to the Alpe di Mondeval and rises to Forcella Giau. From here as described in the previous point.

In addition to the normal climbing gear bring a complete set of friends, hammer and some pegs are advisable. 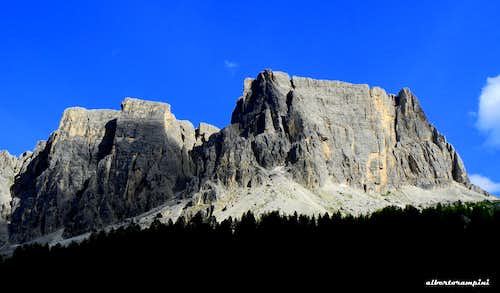 There are not particulary restrictions in hiking and climbing, but Lastoni di Formin are situated inside "Pelmo and Croda da Lago" area, one of the nine mountains systems of the Dolomites acknowledged as UNESCO WORLD HERITAGE and require the best care and respect.

Rifugio Passo Giau m. 2236 is located just on the pass. There are several other possibilities of accomodation in Cortina and surroundings. 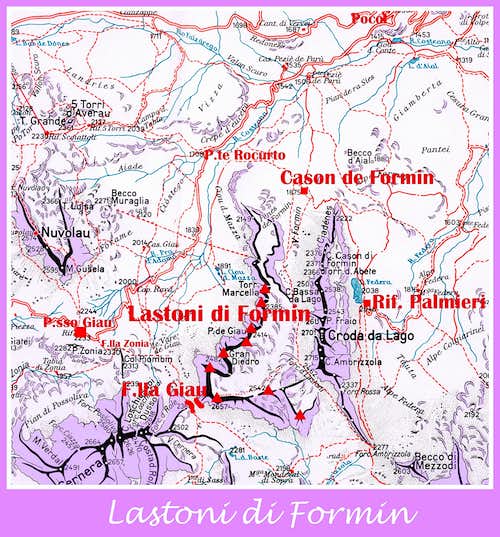