There are many options to extend a trip here, and the only limits to the length of the trek are time and imagination. There are lodges all along the route so there’s little need to carry a huge pack. The trek is very popular and can be very crowded, so in other words, expect a great trip with lots of mountain views, but don’t expect solitude. The trail passes through several interesting villages and different cultures, and the scenery is also very spectacular.

Since the trail never ascends to really high altitudes, it is suitable for most people including children. When my wife and I did the trek (and several others in the region), she was five months pregnant. 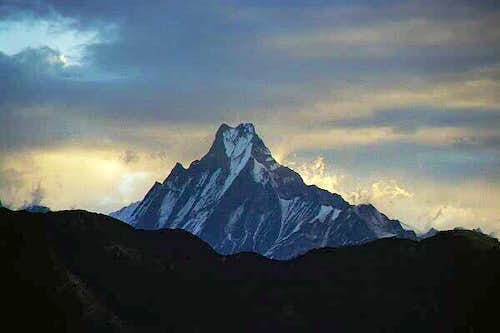 You must first reach Pokhara. This is a large city with all kinds of accommodation. Pokhara can be reached by bus or by plane from Kathmandu. Since flights are weather dependent, it really isn’t that advantageous to book in advance. Simply show up at the airport, and if the weather is clear, book a flight. Plan to stay a day in Pokhara to arrange trekking permits (or porters if needed). 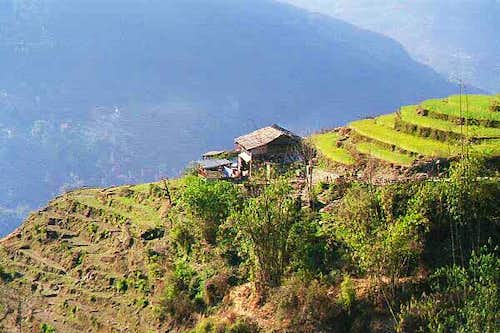 A typical Gurung house seen among the terraced fields en route from Ghandruk to Naya Pul.

The infamous 3280(!) stepped staircase on the Poon Hill route.

From Naya Pul, it is an easy and mostly flat walk to the village of Birethanti. This is where the Modi Khola (river) and Bhurungdi Khola (river) meet. The trail then begins to climb through the several small villages of Ramghai, Sudame, Hille, and Tirkhedhunga. Just beyond here is where the trail will cross a stream and the Bhurungdi Khola. This is where the infamous staircase begins! Locals say that there are 3280 stone steps to Ulleri. The next village reached is Banthanti. You will pass through a rainforest like section covered in ferns and moss-covered trees. You will pass two more villages, Nayathanti and Ghorapani before reaching Ghorapani Pass. Ghorepani Pass is the closest village to Poon Hill and it is recommended that you spend the second night here in order to get an early start for the sunrise from Poon Hill. It is about 45 minutes to an hour to the top of Poon Hill from Ghorapani Pass.

Total elevation gain from Naya Pul to Poon Hill is 1670 meters (5480 feet). From the summit of Poon Hill, there are several possibilities. You can return the same way, or extend the trip to several other locations. Five options will be discussed below.

The Beni Route is an optional ascent route to Poon Hill. It can also be used as a descent route from the Naya Pul Route, and that is how it will be described here. It is a long 1700-meter (5577 feet) descent to Tatopani from Ghorapani, and if you climbed Poon Hill that morning, your knees will have a good workout. From Ghorapani, follow the trail down to the north passing through a beautiful rhododendron forest. We saw a few monkeys in the area, so keep your eyes open. The first village you reach is Chitre, and from there you will descend to Sikha. Sikha is where the Paudwar (pronounced “powder” and it has several spellings) route joins the main route to Tatopani. The trail continues its descent, sometimes using long stone staircases and passes the final village of Ghara before dropping steeply to the confluence of the Ghara Khola and Kali Gendaki (river). There is a national park checkpoint here and everyone must sign in. A new suspension bridge takes you across the Kali Gendaki. It is a short walk to Tatopani, where the Jomsom Trek splits from the Beni here and will be discussed briefly in another section.

To get to Beni from Tatopani you will follow the Kali Gendaki the entire way. The trail changes often from year to year because of landslides falling off the steep canyon walls.

From Tatopani backtrack a short distance, cross the bridge across the Kali Gendaki, and then the Ghara Khola. Continue along the trail that follows the Kali Gendaki down-river. There are a few small villages and a waterfall along the way to Tiplyang. You cross the river on a bridge here. The trail then goes through many marijuana fields before reaching Baisari (basic lodges only) and then Galeshore. From here it is only an hour or so to Beni, which is at the end of the trek.

More details on the route are found on the ROUTE PAGE 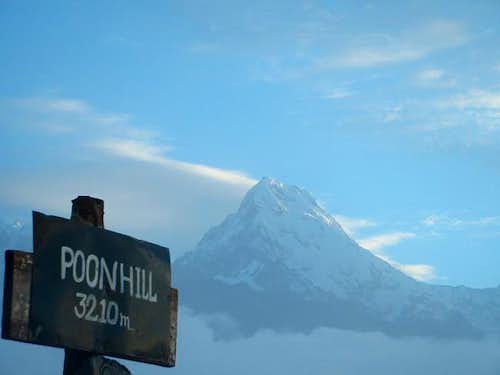 Although this route parallels the main track from Ghorapani to Tatopani, the track is little used by trekkers. We stayed in the village of Paudwar, which was one of the best experiences we had in Nepal.

Apparently we were the only trekkers to visit Paudwar between October 2000 and December 2001, even though the route is close to a popular trekking route. The trail is steeper and more difficult than the main route, but the people were friendly in the village, and the village is less touristy than the ones along the main track.

The trail is hard to find without a guide/porter that speaks the language. A porter usually only cost $5 a day (in 2001), and is well worth the money. Because you will probably need a guide the route will only be described very briefly.

From Ghorapani, descend down to the village of Sikha as described above in the Beni Route Description. It is here where you will leave the main trail. From Sikha, head east along the trail and cross the Ghara Khola river on what we call the “Indiana Jones Bridge” (as it was in 2001). From here, the trail winds through intermitted forest and fields before reaching the village of Paudwar. There was only one place to stay in the village as of December 2001, and you stay with a Nepali family. From Paudwar, the trail descends (with some up and downs) very steeply to the confluence of the Ghara Khola and Kali Gendaki and joins the main track described above in the Beni Route Description. 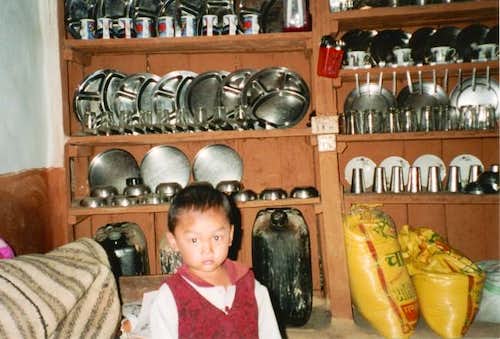 The Nepali house mentioned in Paudwar. This route is off the beaten track, and the only place to stay is with a Nepali family.

Route Overview-Onward along the Jomsom Trek and Annapurna Circuit

From Tatopani, one option is to continue up the Khali Gendaki to Jomsom. This is known as the Jomsom Trek, and is also part of the Annapurna Circuit. The route will only be described briefly as this is a multi week trek and other sources should be consulted. From Tatopani, follow the trail up the Khali Gendaki to Jomsom. This is said to be the deepest gorge in the world and at its deepest point is 6000 meters (19,000) feet deep. Along the way are passed a huge waterfall and several villages. Most people take two to three days to Jomsom. It is recommended that you also extent the trip to at least Mukinath, which is an interesting temple high in the mountains.

Update: The Annapurna Circuit to Mukinath now has a road and the trek has changed entirely. 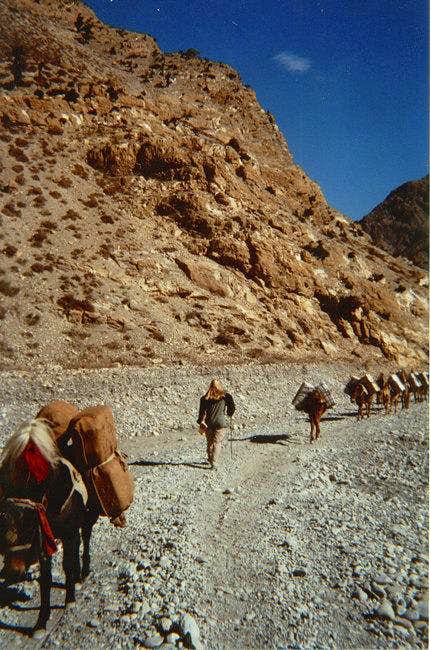 Walking up the Kali Gendaki Valley on the Jomsom Trek.

This is still another option of extending the trip from Poon Hill, and is also an alternate ascent route of Poon Hill. From the village of Ghorapani (not Ghorapani Pass), locate the trail and sign to Deulari (the trail that splits off the main trail and heads east). Follow the trail to the ridge-top village of Deulari and then very steeply down the walls of a gorge to Banthanti. From Banthanti, continue along the trail to Tadapani (not to be confused with Tatopani). Here is where the routes and possibilities are endless. You can take one of three trails up to join the trail going to the Annapurna Sanctuary trail at Chomrong. The trails are the one through Chiukle, which is possibly the most scenic route, the trail through Melaje, or the trail through Baisi Kharka and then Ghandruk.

There is also the possibility of descending and ending the hike from Ghandruk by taking the trails down to Birethanti or over to Dhampus. 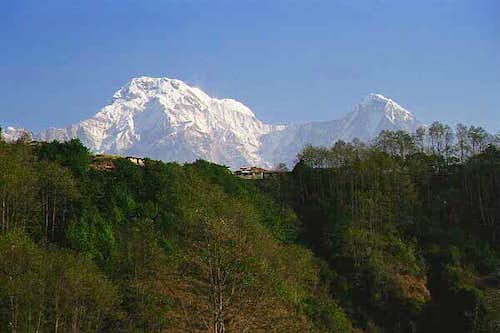 Hillside village of Ghandruk (aka Ghandrung). Annapurna South is in the background.

To extend the trip along the Jomsom Trek, plan on two weeks (more if you take side trips) round trip to Mukinath. If you’re hiking the entire Annapurna Circuit, plan on 18-21 days, more if you plan side. There are endless possibilities in extending the trek into other areas. 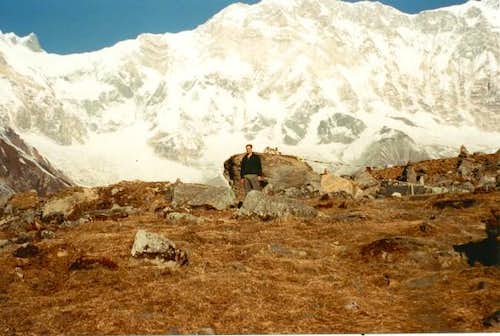 Annapurna I from the Annapurna Sanctuary.

Mid September through mid May is the best time to trek, although the trek can be done year round. The monsoon is from June through mid-September, and this is not an ideal time to go beacause the trails are very wet and the forest is full of leaches, plus it rains every day and clouds usually obscure mountain views.

We had 47 days in the region during late November and mid-January with only one bad weather day. The winter season (late December through February) is also a good time to go (unless you plan on completing the entire Annapurna Circuit) with few crowds and usually good, but cold weather, but you can expect to have some snow and ice on the trails. Remember that there are villages along all the trails, so if you had to sit out some bad weather, it’s not that bad.

You could camp along the trails, though I don’t know why anyone would want to. Every village has several lodges for only a few dollars a night. Most (every one we saw) are clean and pleasant. All lodges serve food and snacks; so don’t bother with carrying any food along the trails. 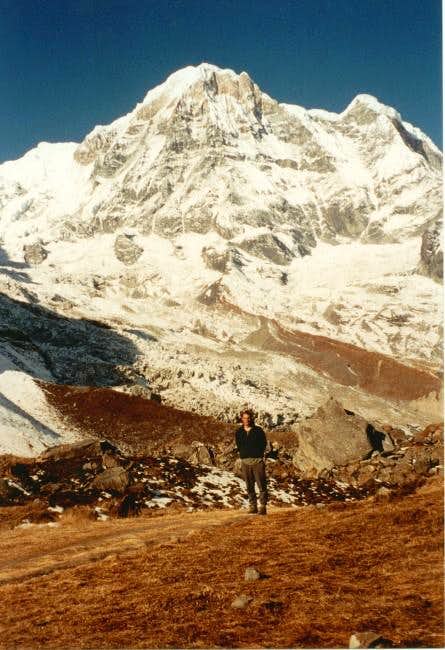 Annapurna South from Annapurna Base Camp.

No mountain weather forcast or weather cams are available.

Updates on the Political Situation

Most of the political problems Nepal was experiencing a few years ago are over.