Surya Peak is a 5000-meter summit in the Langtang region of Nepal. Sitting just above Goisaikunda lakes, the peak is most often climbed as part of a visit to these high sacred lakes, where Lord Shiva is said to have thrust his trident into the ground creating the small alpine chain of lakes. The religious significance of the lakes means the trail is well traveled with a number of tea houses along the way. While travel above the lakes is off trail, route finding is fairly straightforward with a use trail into an upper basin and class 2 and 3 the remaining distance to the summit.

It makes an excellent addition to those trekking in the Langtang and Gosaikunda region or a good acclimatization summit for larger Himalayan Peaks.

Getting there is undoubtedly the most difficult part. From Kathmandu, you'll need to catch a bus heading for Dhunche, the start of the Gosaikunda trek, or Syapru Besi, the start of the trek into Langtang Valley. Most trekkers in the region are heading for Syapru Besi, but you pass through Dhunche and can easily hop off at any of the checkpoints at the start of town. Several buses leave daily and will cost around $20 USD. The roads are in horrible shape, so plan on a full day of travel there and back. Hiring a private jeep will shave off some time by allowing passage through even rougher roads to the north of Kathmandu, but will run around $200. 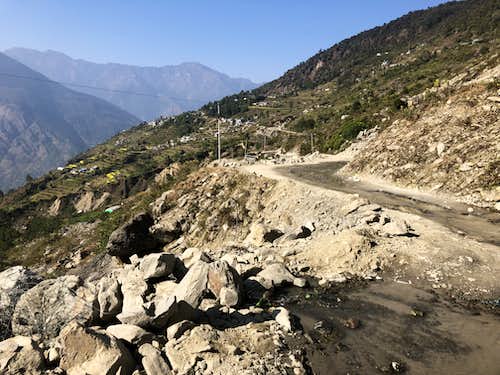 From Dhunche, head east through town continuing down the side road at the upper hairpin turn at the end of town. Pass several homes until reaching the trail near the Himalayan Spring Water Plant. Once on the trail, it is quite easy to follow, switching up through jungle through Deurali (2800 m) with one small tea house, Dhimsa (3100 m) with two tea houses up to Sing Gompa (3300 m) with at least 5 tea houses and a working yak cheese farm. Sing Gompa has the best tea houses along the route and makes for a good place to spend at least one night.

Continuing past Sing Gompa, the forest becomes less jungle and more pine, with views of Langtang Peak to the north.

Between Sing Gompa and the tea houses of Gosaikunda, you will pass through Cholang Pati (3600 m) and Laurebina (3950 m), each with several small tea houses with great views.

Gosaikunda is situated at 4400 m with a dramatic traverse in and roughly 5 tea houses dotted along the north side of the lake. Due to the elevation and distance from Dhunche, these will have less amenities and higher prices compared to the tea houses lower down in Sing Gompa.

From Gosaikunda, you'll need to climb into the upper basin west of the summit. At the inlet of the lake is a shrine to Shiva covered in prayer flags. A cairn can be found here leading up through the talus to a decent use trail leading to a small hanging lake just below a saddle along the ridgeline. This route is surprisingly well cairned once you find it, but you're more or less trying to get to the saddle above if you get off track. Once you reach the saddle, continue following the cairns as you traverse east into the basin.

Now for the million dollar question- which summit is Surya? The answer changes depending on which map you look at. Almost all maps have an elevation listed as 5145 m regardless of which bump gets the honor of the name. With that in mind, this elevation does correspond to the summit at the far side of the basin. However a plaque with prayer flags can be found on the lower summit just over 5000 m directly west of the 5145 m peak and directly north of Laurebina La. To make things even more confusing, there are a number of clearly higher summit to the immediate east which are unnamed. So which peak should you head up? Based on the consistent elevation given for Surya Peak, I would call the peak at the end of the basin the true Surya Peak, and the lower peak with the plaque and prayer flags 'trekkers Surya,' as it is far more well travelled. The higher summit requires a tedious traverse across a morraine in the far basin and some long class 2 and 3 slogging to the summit. Either way, you'll walk away with a 5000 meter summit.

Entry to Langtang National Park requires a permit which can be purchased at the checkpoint just outside Dhunche. Cost as of 2018 was 3,000 NRs, which is about USD $ 25-30.

The tea houses are quite cheap although prices likely change during pilgrimage and festivals when demand may be higher. Depending on meal choices, plan on $10-20/ night for room and board.

Although Surya Peak can be climbed year round, like most of Nepal, spring and fall are best. Many of the tea houses above Sing Gompa close in the winter from lack of business and the fact that the lakes freeze over. But if you're up for a little snow camping and some extra planning, there's no reason you couldn't summit in the winter. Summer brings it's own challenges with almost daily monsoons, not to mention leeches teeming in the lower elevations.

Support the struggling Nepal economy and stay in tea houses along the trek. It'll save you plenty of weight for the hike in and the people are friendly and helpful.

Trip Report: The Mountains Are Calling