From Rosset lake, Punta Basei on the right and Levanne in the background
The watershed between Orco and Rhemes Valleys consists of some interesting and well-known summits; Punta Basei is one of them, it is the third summit of the ridge starting from W and is sometime considered part of a sort of subgroup formed of Punta Galisia (3346m), Punta Bousson (3337m) and Punta Basei (3338m), in fact on the maps of the XIX century these three summits were simply recognised as Galisia.
Its S and E sides belongs to Orco Valley, the first one is a 500m high wall of bad rock, while the E one is not particularly steep and is partially covered by the Basei Glacier that is fast-fading due to the more and more high temperatures of last years; the western one slopes down to the Rhemes valley, with the presence of Lavassey Glacier.
The notoriety of this mountain depends from the easy and relatively short access, in fact, when the road to Nivolet Pass is open (early June to late September), the summit is reachable in approximately three hours without alpine gear (required for the N side).
Along the last meters of the normal route, there is a window in the stone with a nice view to the most beautiful mountains of Rhemes Valley (see picture).
First known ascent: August 1875 by C. Poccardi and G. Blanchetti. 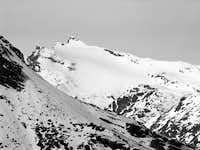 Once passed the tiny village of Introd, after 2 km. turn right to Val di Rhêmes (or Rhêmes Notre Dame). Follow paved road until it is possible. The road ends in Thumel, 1879m. No parking problem.

Road to Nivolet Pass access restricted: road open only from June to end of September. Saturday and Sunday, bus mandatory from Serrù dam (bikes are allowed).

By train/busTrain to Aosta from Turin or Milan then local bus to Rhêmes Notre Dame. Timetables here.Local train from Torino to Pont Canavese, then bus to Ceresole Reale and Nivolet Pass. Timetables here. 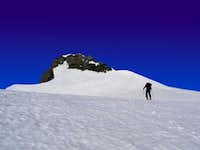 Height difference: 756mDifficulty: easy alpinismPark the car just 50 meters under Nivolet Pass Valsavarenche side. Follow the trail to Colle Leynir, then turn left and walk on the path to colle Basei. Arrived at the base of Basei Glacier, walk on the glacier or along its edge, keeping the direction to the summit. Climb the last rocks finding one passage aided by a fixed rope and walk along the last 10 meters of horizontal ridge. Approximately same route for skinners except in the early spring when the road could be closed at Lago Agnel (2300m), Lago Serrù (2225m) or before.Other routes: 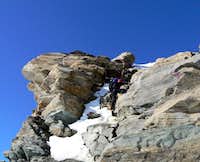 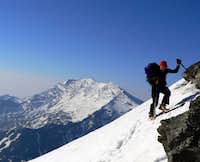 All routes are within Parco Nazionale del Gran Paradiso: dogs or other animals are not allowed. Camping is strictly forbidden (except for emergency from sunset 'til dawn). Any fees required nor parking permits. Ceresole Reale - Nivolet Pass paved road: Seasonal opening from early June to the end of September. During Sat and Sun in July and August, engine vehicles (cars, campers and motorbikes) must stop in Serrù dam car park. Bus mandatory to Nivolet pass.Further details at P.N.G.P. official site. 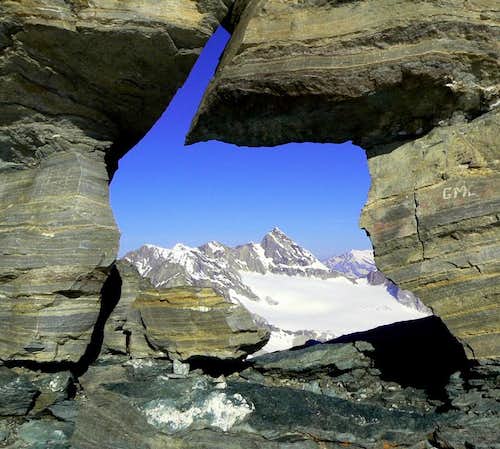 The window of Punta Basei