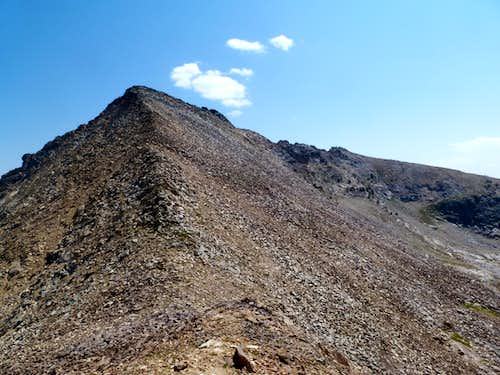 Looking up at the summit ridge to Ruby Pyramid

Ruby Pyramid is a lofty summit in the Ruby Mountains; located a little less than a half mile away from Ruby Dome 11,387'.  It can often be confused with Ruby Dome due to its proximity and similar height.

Ruby Pyramid is the second highest peak in the Ruby Mountains, but is rarely noted as a major summit in the Ruby Mountain Range. This is despite the fact it has a prominence of 438’ above the saddle it shares with Ruby Dome. It isn’t even named on USGS topo maps. Nor is it listed as a “point”. The 11,373’ is based on the fact that it is approximately 14’ lower than Ruby Dome according to Google Earth™. Peakbagger.com lists the mountain as Ruby Dome - East Peak with an elevation range of 11,365' to 11,400'.  Lists of John refers to it as "Ruby Pyramid" and cites an elevation slightly higher - at 11,380'.  It is clear, however, that Ruby Dome is higher than Ruby Pyramid.

When to Climb
Typically temperatures in Elko/Spring Creek area 5 to 10 degrees cooler than in Reno/Sparks/Carson City. The Ruby Mountains get unusual amounts of precipitation for a desert mountain range, and thus are typically covered in snow from at least mid-fall to early summer, depending on the year.

Because they are so close to population, however, winter climbing is certainly not out of the question. For hikers interested in mostly snow free routes, however, a good rule of thumb is to start hiking in late June/early July through early October before the first significant snowfall. Fall colors in the Ruby Mountains are the stuff of legend. 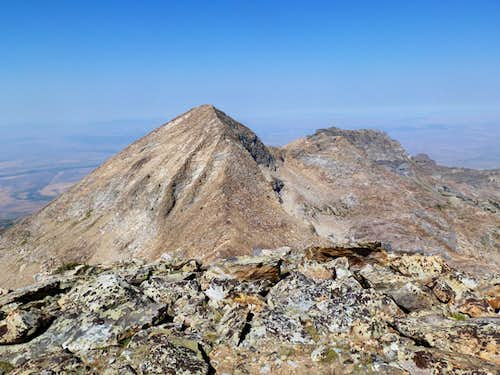 Ruby Pyramid is an ideal climb to combine with Ruby Dome, because they share a saddle and are so close to each other.

From the west, exit I-80 on exit 301 and turn right onto Mountain City Hwy, travel (southeast) for 1 mile to Idaho Street, turn left and follow Idaho street (northeast) for 0.8 miles to the intersection with state route 227 (Lamoille Highway). Turn right and follow route 227 for 17 miles while heading generally in a southeast direction to the four-way intersection with Pleasant Valley Road. Turn right onto Pleasant Valley Road and follow this very well-graded dirt road due south for 3.4 miles to a sharp right hand bend in the road. Find a place to park near the locked gate, or open the gate and continue up the road to the campgrounds and the trailhead. If doing so, take the first right – which leads to the campgrounds. The road is well graded and easily accessible with a 2WD vehicle.

The primary route is Hennen Canyon, which is a basic trail, rocky at parts, leading up to Griswold Lake at 9229’ is a little over 3 ½ miles to the lake from the actual trailhead. (Note the trailhead sign says 3 miles to Griswold Lake and 4 miles to Ruby Dome, but this is clearly “as the crow flies” because the trail is longer than that). The trail gradually climbs for the first two miles, before getting steeper and harder to follow the rest of the way to the lake. Follow the cairns, or go straight up the boulders towards the lake.

Once at the lake, take the trail on the left side of the lake, which steeply climbs towards a prominent knob. We found the trail easy to follow on the way up, albeit a little more confusing on the way down. Once at the knob, you can see the saddle between Ruby Dome and Ruby Pyramid. If you do it right, you won’t have to really lose any elevation. Just head up towards the saddle staying below the Dome, and you will reach the boulder field to the saddle. Once at the saddle, head left towards Ruby Pyramid, or right towards Ruby Dome. Although they look quite daunting, they are no more than steep class 2 scrambles. 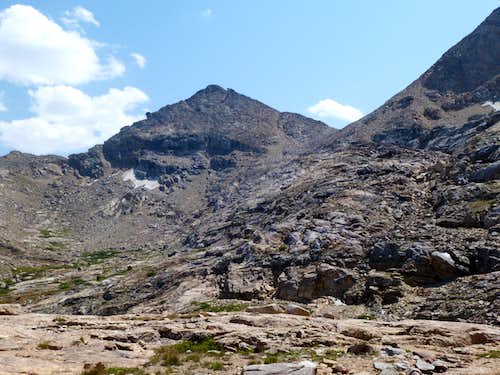 Approaching Ruby Pyramid from near the knob 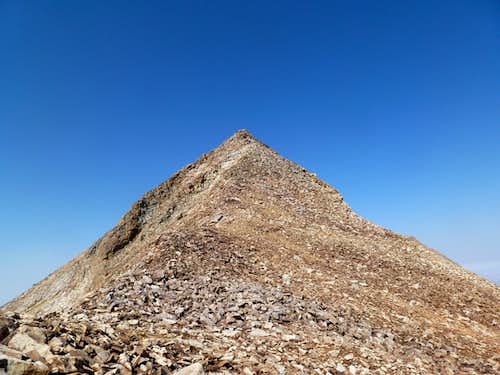 There are several basic campsites near the trailhead. See "Red Tape" section for more details on access. There aren't really any amenities.

Like Ruby Dome, a key is required if you wish to camp, and/or save some distance. A locked gate is located about 1 ¼ miles and about 500’ below the actual trailhead. As posted by Dean on the Ruby Dome page, there is no red tape to climb this peak from the locked gate on Pleasant Valley Road. But if wanting to camp or reach the trailhead by car, obtain the key (for $10 a person and $25 returnable deposit) from the Spring Creek Property Owners Association, 451 Spring Creek Parkway, Elko NV 89801, or by calling the office, (775) 753-6295, Mon- Fri. 8:00 am - 5:00 pm. Their office is located about 3 miles on Spring Creek Parkway from the intersection with Route 227 in Spring Creek.

When we camped on August 17, 2012, there was no problem obtaining the key. Leaving is tricky, because nearly every vehicle in and out locks the gate. So be sure to plan accordingly if you have multiple automobiles.