Verdi Peak of the Ruby Mountains in Nevada is a peak reaching to 11074 ft (3375 m) at a unique area of the range. Not only does it stand at the middle of the bend of Lamoille Canyon such that visitors can view the entire canyon at once, but it provides views of the far-off-to-the-east Ruby Valley, which takes an hour or two of driving from the Elko-Spring Creek area to reach. The peak is also the highest point on the north side of Lamoille Canyon.

Interestingly Verdi Peak is thought by some to be comprised of ridgeline that splits it into three peaks, a north, central and south peak. Confusingly, as of 2021 the most prominent cairn remains on the north peak while wilderness maps dating back to at least 2005 recognize only one peak here as Verdi Peak---the high point on the southernmost end of this high ridgeline section, approximately half a mile from and 30 feet above the north end's highest terrain. An even smaller vertical-height difference seems to exist between the "central peak" and the true Verdi Peak, and in fact, some believe that the central peak is actually the highest point of the area.

In the below picture taken from the high north end, the central peak is the high point on the right that is closest to Verdi Lake. Indeed it is tempting to say that the surveryors ascribed the high point to the wrong part of the mountain. 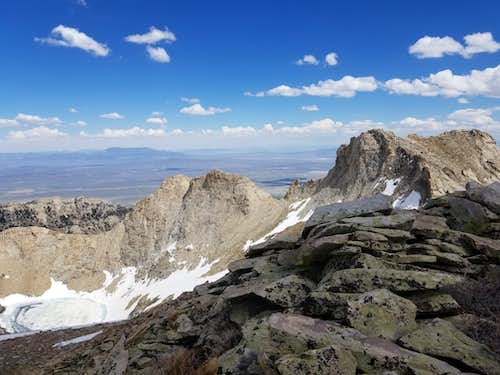 And the following picture shows the "north peak" from which the above picture was taken. It is on the far left as seen from the "central peak." Out of the frame of the picture on the right side, the northeast, is Smith Peak, a recognized peak of the Rubies, which is approximately 1.75 miles away as the crow flies.

Below is a view looking northwest toward the mouth of Lamoille Canyon from that northern high point. 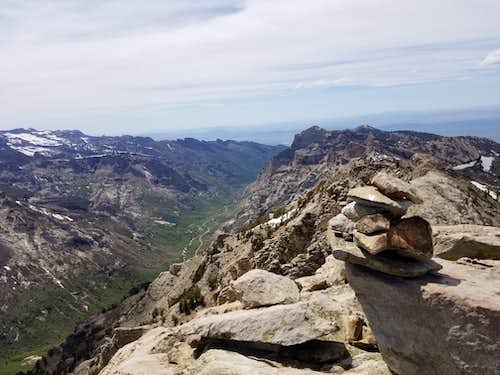 This next picture was taken from atop Mt. Gilbert. You can see Verdi Peak nearly five linear miles away (at just north of due east) and how the ridgeline seems to compete for the highest point. Down the other side of the trough area is Verdi Lake. 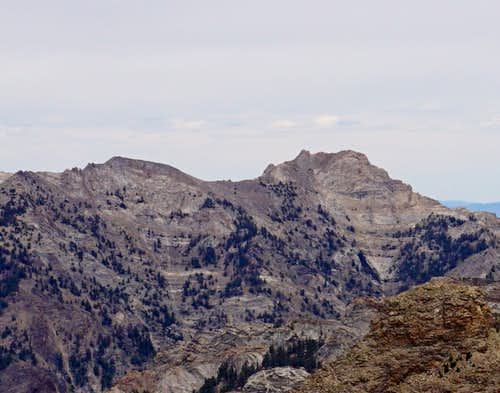 And from one more vantage point that seems to prove the maps as 100% correct---the following is Verdi Peak as seen from just beneath Thomas Peak, almost due east of Mt. Gilbert, and approximately 1.3 miles away from Verdi Peak. This best shows the popular way up from the Lamoille Canyon scenic byway. Just right from center at the bottom of the photo shows the chute to start up. Then people go left toward the saddle. The terrain is very mixed between scattered rocks and dirt that can be quite soft at times. The final push toward the saddle involves some simple scrambling. Water supply in the height of summer can get scarce along this route, forcing visitors to descend to Verdi Lake if they need to refill. 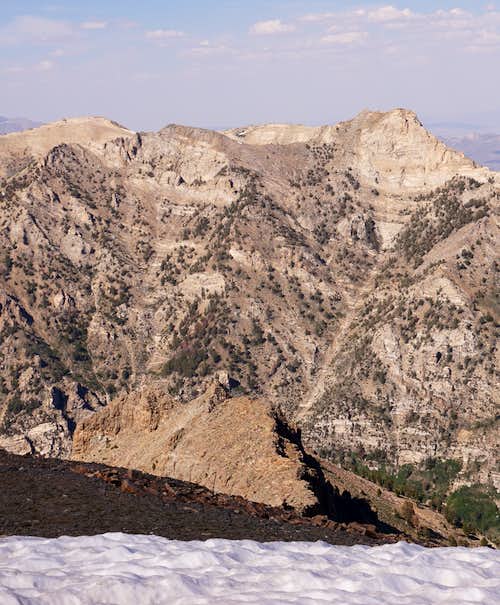 Views of Talbot Canyon and Verdi Lake are not the only sights to see here. Looking south from Verdi Peak allows for wide views of Lamoille Canyon's rugged terrain. Below is a view looking nearly due south toward the end of Lamoille Canyon. An array of popular areas are visible from here, including Island Lake, Lamoille Lake (snow-covered in picture), Liberty Pass, the loop parking area at the end of the canyon, the snow-covered Dollar Lakes, and Ruby Valley. Directly along the ridge from Verdi Peak is a seldom-visited yet noticeable peak that has a name according to only a few online sources. "Peak 10811." 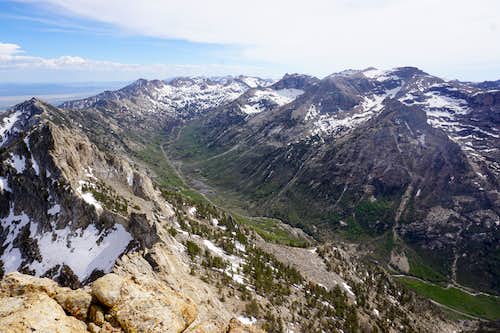 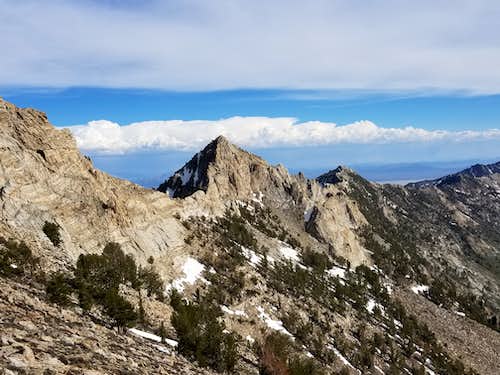 Getting to the area where one can begin hiking to Verdi Peak is quite simple.

From Intersate I-80, get to Elko. Next, head up and over Lamoille Pass on Lamoille Highway (227) toward the small town of Spring Creek. From there, stay on this road, passing a small shopping center on the left and then, a few more miles down the road, a Maverik fuel station on the left. The Maverik is the last place to stop and fill up fuel and get snacks, etc. Then will come a traffic circle that you'll use to continue heading directly toward the mountains (second right once entering the traffic circle). Approach the circle in the left lane to enter the traffic circle. Continue onward toward the mountains, and upon rounding a bend and seeing a 35 MPH sign (and a seemingly less noticeable brown sign for Lamoille Canyon Recreation Area), slow down and take a right. Depending on the chosen place to begin the hike, either park in the Talbot Trail parking area that is on the right soon after passing the road that leads down to a small BBQ & party area, also on the right, or park high up into the canyon off of the road's shoulder near the Terraces Camping/Picnic Area.

Adventurers who are somewhere south of the Ruby Mountain Range can find Lamoille Canyon and therefore a great Verdi Peak hike by first finding U.S. Route 50, i.e., "The Loneliest Highway in America." From U.S. 50, head north on State Route 892, which is just southeast of Eureka, NV. Though you may notice the road changing names---from 892 to Strawberry Rd to White Pine County Road 1, to Old Nevada 228---simply maintain the course until it ends perpendicular to State Route 228/Harrison Pass Rd. Take a left and head north. This old desert road is also known as Jiggs Highway, and despite its seeming solitude, it is a well trafficked two-lane road utilized mostly by the Bald Mountain Mine and its contractors. Jiggs Highway will end perpendicular to Lamoille Highway in Spring Creek, NV. Take a right and head toward the Ruby Mountains. From here, follow the directions starting at the third sentence in the "Interstate I-80" section above.

One of the first parking areas after entering Lamoille Canyon on its scenic byway is the Talbot Trail parking lot. It's a semi-circular parking lot just off the right side of the road as you enter Lamoille Canyon. Across the street from this area is the beginning of Talbot Trail, an approximately 11-mile [research mileage of this] trail that leads around the north side of the north side (you read that right) of Lamoille Canyon, enters Talbot Canyon, and finally ends at Verdi Lake and also the terminus of Talbot Canyon. Via this route, scrambling up the slopes on the southwest side of Verdi Lake will bring you onto the saddle between the west and central/east peaks. The west and central peak are roughly half-a-mile apart, whereas the central and east peak are approximately only 100 meters apart.

Bushwhacking near the Terraces Campground area

Some people will surely prefer to reach Verdi Peak via a more direct route. Such a route is attainable by simply passing the Talbot Trail parking area and continuing up into Lamoille Canyon. The best parking area that lends access to this direct route is between the Thomas Canyon campground and the Terraces Campground. To simplify, pass the Thomas Canyon campground and then pass an overlook and hiking area that is labled "Changing Canyon Trail." The next small parking area on the right side of the road will be the best one to use. Directly across the street from there is a small waterfall approximately 75 yards away. This waterfall will be just to the right of a large rock face. Bushwhack from the road up to that face and carefully skirt around it to the right, heading toward the waterfall. From there, head northeast up the mountain and enjoy the climb. This way can save a lot of time, total elevation gain, and hiking miles, though the hike up is much steeper and therefore rigorous.

At the time of writing this, no District-Specific Orders are active, but still, Forest-wide orders are, and they include things like prohibited alcohol possession by minors and a 14-day stay limit.

The summer and early fall months tend to be great months for visiting Verdi Peak and the surrounding area. Though the mountains will always contain hazards any time of year, adventuring into the area in the winter months is the most dangerous---not only can the temperatures get extremely cold at the higher mountain altititudes, but avalanches are real risks. Only about six miles south of Verdi Lake a teenager died in an avalanche while snowmobiling near Castle Lake in early 2021. If one were to insist on a winter ascent to this peak, going the Talbot Canyon route would arguably be safest. 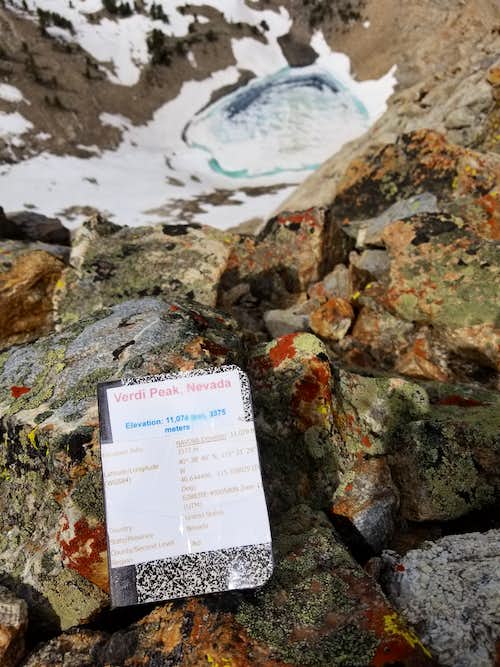 Though some level-grounded, wooded areas are scattered below Verdi Peak's west side, Verdi Lake is the most noteworthy place to camp for a multi-day adventure close to the peak. Many camping areas also reside close to the road regardless of if the official campgrounds are full.