The Santa Cruz Mountain Range occupies most of the San Francisco Peninsula and stretches south, separating the cities of San Jose and Santa Cruz. A vast array of flora exists in the Santa Cruz Mounatins, with misty redwood forests dominating the northern part of the range, to dense chaparral-covered hillsides in the south. The Santa Cruz Mounatins is abundant with parks and trails, making it an ideal place for hikers, mountain bikers, rock climbers, equestrians, and more. There are two county highpoints in the range as well, Long Ridge and Mt. Bielawski. Access is also great in the range. Skyline Boulevard (CA 35) runs north-south along the entire central to northern spine of the range. Summit Road runs in a southeast-northwest direction along the spine of the range in the south. Along with those, there are many roads that cross the range, including three CA highways. Even with great access, there are many areas of the range that are left practically untouched by the SF metro area to the east. One can always find new, unexplored places in the Santa Cruz Mountains. There are heavily used areas of the mountains as well, for example Castle Rock State Park, the Forest of Nisene Marks and the Skyline Open Space Preserve area. If solitude is what you're looking for, you'll find plenty in the Sierra Azul area, or perhaps in the northern end of the range.

I highly suggest the book Ghosts of the Santa Cruz Mountains. It shares the rich history of all the towns that used to dot the range back in the day. Very interesting stuff. 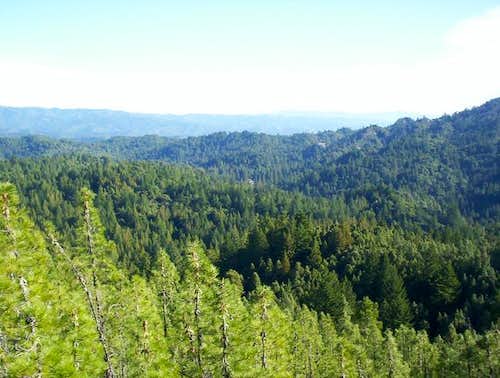 View across the Santa Cruz Mounatins

The Santa Cruz Mountains have great access. Four CA state highways cross the range, them being CA 92, which links I-280 with Half Moon Bay, and CA 9, which links Los Gatos and Saratoga with the Boulder Creek and Big Basin area. The third is CA 17, the main fairway between San Jose and Santa Cruz. This is the largest and probably the most dangerous of the four higways. The fourth is CA 84, which runs across the central part of the range. Skyline Boulevard (CA 35) begins above Saratoga and runs north along the crest of the range into San Francisco. Summit Road heads south from the beginning of Skyline and provides access to much of the southern portion of the range. Many other backroads cross the range.

The Santa Cruz Mounatins has its fair share of private property and restricted areas. Generally there are more private lands in the central to southern parts of the range.

The Santa Cruz Mountains are also very seismically active, due to the fact that the San Andreas fault runs through the entirety of the range. A dozen or so earthquakes occur everyday along the faultline, usually they area very small and unfelt by humans. Check out this map that shows all earthquakes in the Santa Cruz Mounatains.

In the summer months, the south and west slopes of the range are often shrouded all day in a very thick fog from the coast. This can be a welcoming feel from the heat of the east side. The range gets around 50 inches of rain a year, mostly from November through April. Snow falls mostly in the southern area of the range, for that is where the highest peaks are located. Snow doesn't usually get much deeper than a few inches and sticks a few days.