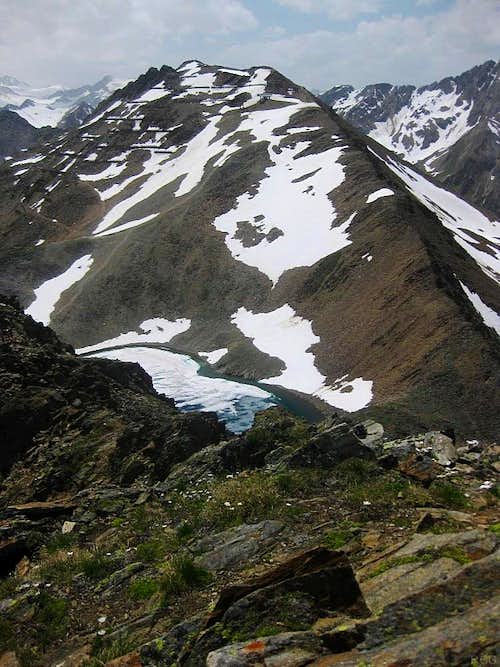 Schwarzkogel from Rotkogel
The Polleskamm is a short ridge, about 10 km long, stretching roughly from NNE to SSW. The northern tip starts in the Ötztal near the village of Bruggen. At its southwestern end, where it joins the much longer Geigenkamm stretching N-S, the ridge reaches its culmination point at the Polleskögel, a close knit cluster of peaks, with the main summit at 3035m. About 2.5 km away and only slightly lower, at 3016m, the Schwarzkogel is the second highest peak on the ridge. Directly northeast of the mountain, surprisingly located on the ridge itself, lies a small high alpine lake, the Schwarzsee. On the other side the ridge continues with the Rotkogel, and a bit off the ridge to the east, the Schwarzseekogel (2931m) helps to block the lake as well.

Between Polleskamm and Geigenkamm lies the very quiet Pollestal. In stark contrast, on the southeastern side of the Polleskamm you'll find the busy Rettenbachtal. In winter, this is the heart of the Söldener ski area. The Schwarzkogel lies at its very edge, and one of the ski lifts goes almost to the top. Even in cumbersome ski boots, I estimate that it would take no more than 10 minutes to walk up the last part. Although the ski developments take away a little bit from the summer experience, the views from the top are still great. 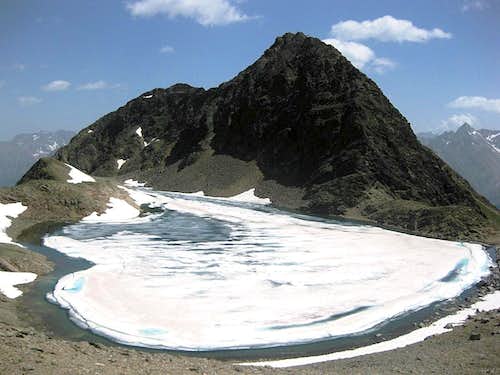 Ice and snow on the Schwarzsee, with the Rotkogel on the other side, seen from the upper slopes of the Schwarzkogel 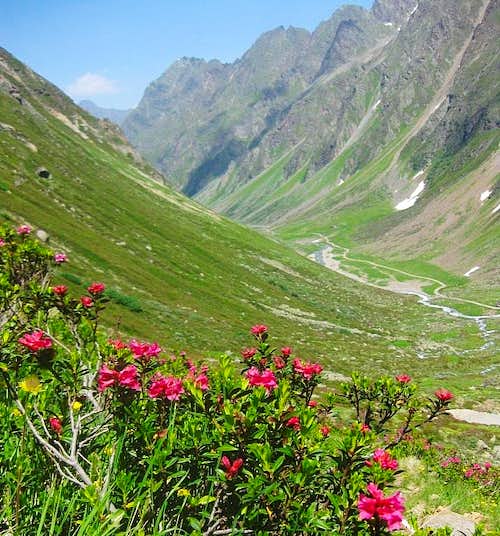 Alpine rose in the Pollestal
Until recently, there was a small summer ski area on the glaciers at the end of the Rettenbachtal. However, the glaciers have receded too far to keep it economically feasible, so the area closed for summer skiing a couple of years ago. But to get skiers up there, a toll road was constructed, the Ötztaler Gletscherstraße, which penetrates deep into the valley. In winter it's buried below the snow, but as soon as it opens again sometime in spring, the road can get you high into the mountains quickly, making the mountain easy to reach.There's also a bus service along the road.

The easiest way to get to the Schwarzkogel is by the Gletscherstraße. The shortest route in distance starts at Gasthof Falkner (2145m), the shortest in time at the junction with the dirt road at around 2500m. Alternatively, from Sölden you can take the Giggijochbahn, one of the few lifts in the area that operate in summer to quickly transport hikers up into the mountains. Or you can simply walk up from Sölden. 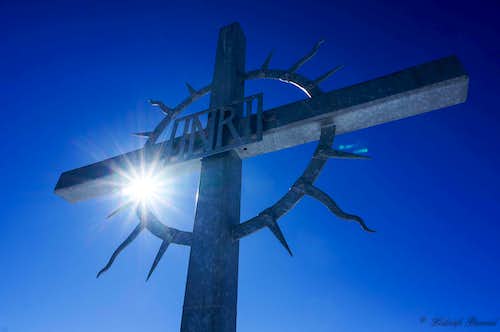 Annotated panorama from the Schwarzkogel summit towards the Stubai Alps

Click here to view a larger map
There are ski resorts all over the long Ötztal valley, but the nearby village of Sölden is arguably the most important one. It's easy to get there by car or by public transport, but being such a popular place, in winter it's not as easy to get a bed if you just walk in without a reservation.

In summer, there are far less tourists and that makes it a very different place. Most visitors come for hiking, mountain biking, cycling and sight seeing; a small minority come for other activities, such as climbing the big glaciated peaks in the southern Ötztal area. All in all, while Sölden is far from crowded in summer, it's not deserted either. Some restaurants are closed, but there are still plenty open for business. At first glance, all the ski outlets seem to have turned into specialist outdoor stores - and the staff really know what they are talking about. Public transport is excellent, and if you arrive unannounced, you'll quite likely have no trouble finding accommodation - unless you happen to stumble in during one of the special summer events, especially the Ötztal cycling marathon. All this make it an excellent base for exploring the area.

Sölden can be reached from only two directions, north or south.

The northern entrance to the Ötztal lies at the small village of Ötztal Bahnhof, and can easily be reached by train or car from east, west or north. The city of Innsbruck lies just east of there. It has a small international airport, but further north, Munich is still close and it has much better connections, and you can take a train from there.

From Italy in the south, you can drive over the very scenic Timmelsjoch, a high mountain pass. It's closed in winter and when there is too much snow. In that case the alternative route from the south is over the Brenner pass, via Innsbruck.

Either on the ascent, on the descent or both, you are very likely to pass the Rotkogelhütte (2660m). There are many ways to get there from Sölden. A selection (the times given are only for getting to the Rotkogelhütte): 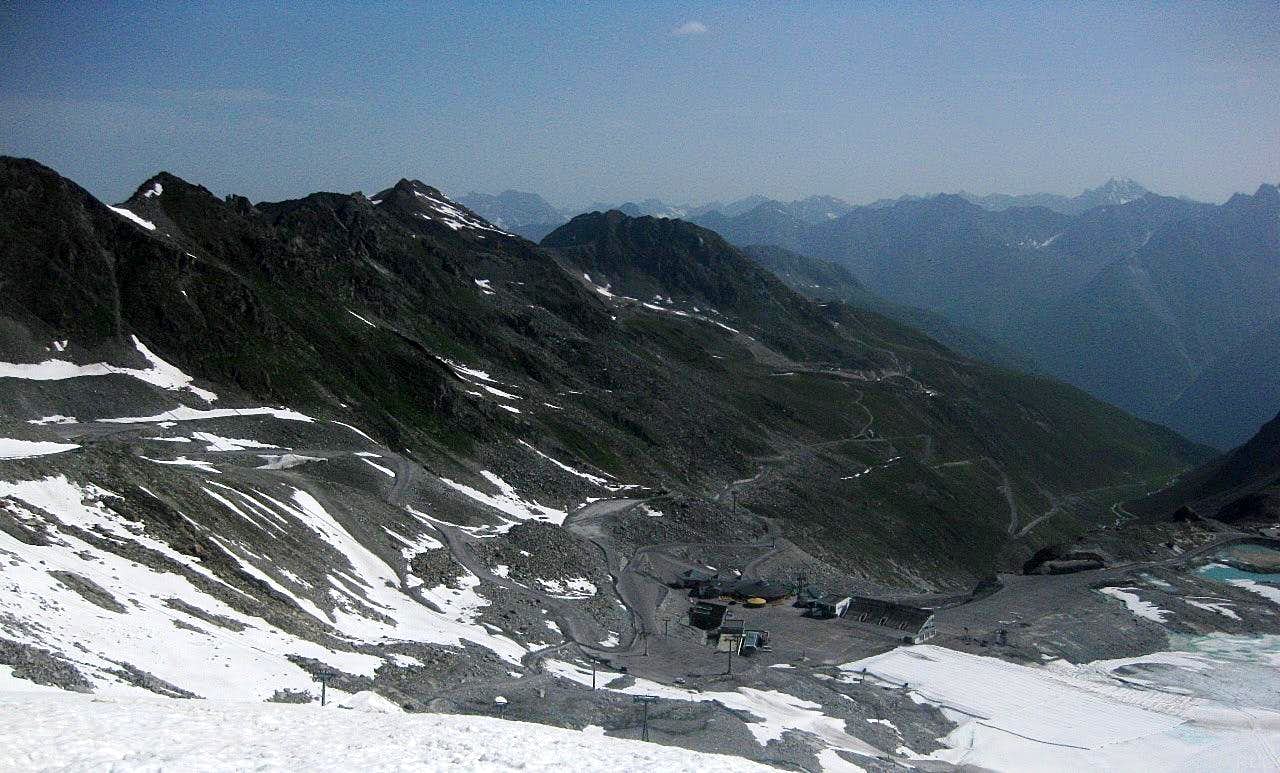 Looking down the Rettenbachtal from the Rettenbachferner. The large and unattractive parking lot is just below, and the Gletscherstraße is clear to see. Both are testament to times gone by, when summer skiing was still going strong. The Schwarzseekogel is the broad summit in the center, the one just to the left of it, with the double top, is the Schwarzkogel. From here, the shortest way to the Schwarzkogel is the SE route: go down along the road to around 2500 and take the dirt road to the left (you can see the junction in the photo), and soon after that , even before passing the Schwarzseekogel, turn left and go up the ski slopes, where you can still a little bit of snow.

Open Source Map of Schwarzkogel, including the northeast route - not all trails are shown on this map 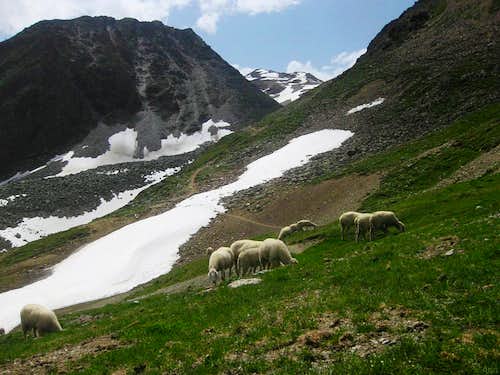 On the left is the Schwarzseekogel, the slopes on the right belong to the Rotkogel. The trail leads to the saddle between the two, past the Schwarzsee and further to the Schwarzkogel, the deceptively small peak in the distance. 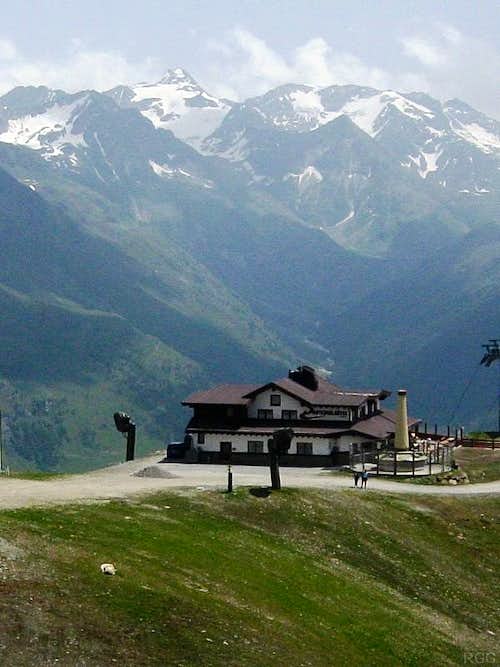 There is no overnight accommodation at the Rotkogelhütte, but the food isn't too bad, and the views are outstanding!
This is the most popular route, both because it is quite scenic and because of the conveniently located Rotkogelhütte, northeast of the mountain. From there, a well used trail leads towards the summit. A sign says 1½ hours, but that includes sight seeing - not counting that, it's 1 hour. About half way, you'll pass the Schwarzsee. There is no trail for a short while, because the route crosses a rough boulder field along the southern shores of this small high alpine lake. After that, it gets easy again.

About 5 minutes from the top, where the route passes the summit station of a ski lift, it turns south for the home stretch. 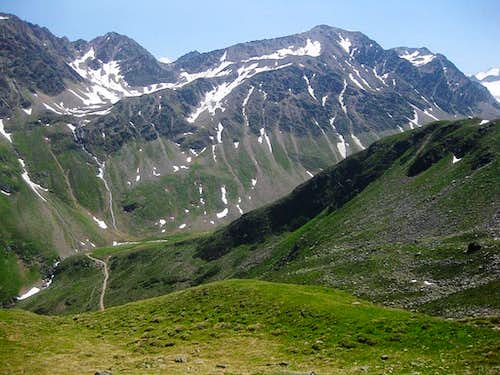 Rotkogel and Schwarzkogel from the Pollestal
Southeast of the mountain lies the Rettenbachkar, an old glacier bowl. The glacier is long gone, but it's a ski slope during the winter season, and when the snow melts away, the dirt road that services the ski lift summit station emerges. It's not the most appealing route, but it's an easy way up the gentle slopes until the route joins the northeastern one, shortly before the ski lift summit station.

See also the large photo at the end of the previous chapter.

Much, much longer is the route from the north, from the Pollestal, a quiet glacier carved valley running parallel to the Polleskamm. It also joins the northeastern route very close to the ski lift station. The northern route leaves the Pollestal valley floor at around 2300m, but what makes it so long is that it takes a couple of hours to even get there: from the road in the Ötztal valley, the shortest routes start at the villages of Im Brand (1260m), Bruggen (1238m) and the southern tip of Huben (1199m), all near the entrance of the Pollestal.

Apart from the toll road, none. 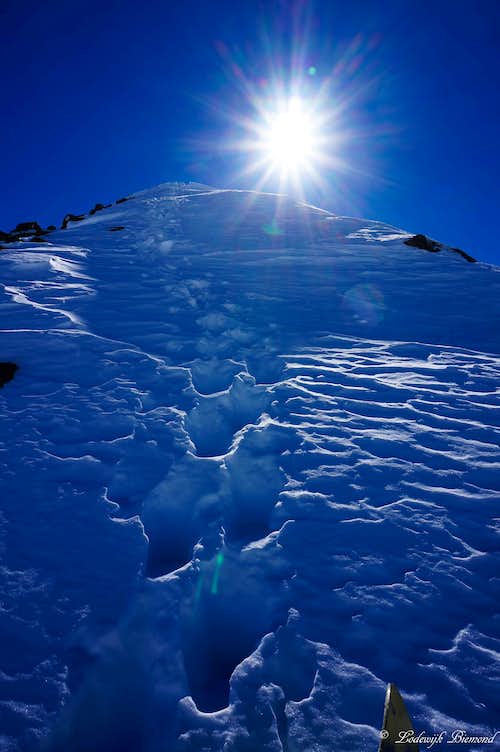 A winter ascent: a steep(ish) part
All year around, but for logistical reasons, it is easier during the summer season when the Gletscherstraße or Giggijochbahn are open, or during the ski season, when you can easily get to the top from the ski lift summit station, even on ski boots.

Although the name may suggest otherwise, the Rotkogelhütte offers food, but no overnight accommodation. The nearest place to stay is the tiny tourist village of Hochsölden (2050m), but there is much more choice in Sölden itself.

Oebb is the site of the "Österreichische Bahn" -  the Austrian rail company - but it goes further than that. The travel planner includes buses and international trains, such as from Munich.