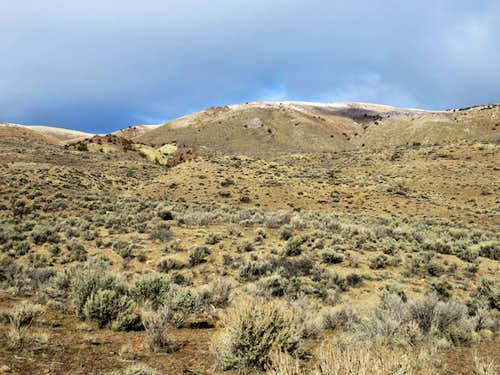 Seven Lakes Mountain from the south

Seven Lakes Mountain gets its name from a series of lakes on its north side; on Google Earth™ I could only identify six lakes. Only one lake is visible from the summit and it actually did have water in it when I visited on December 26, 2014.

From the south a well graded dirt road goes up to within 2 ½ miles of the summit. 2WD automobiles can make it another ¼ mile up, although the road can be sketchy in muddy conditions. The mountain can also be approached from Red Rocks via a longer approach.

There a number of ridges and ups and downs along the range. Fortunately, however, the true summit is pretty obvious once you reach it because there is a pile of rocks and a summit register.

The best time to hike Seven Lakes Mountain and in the Red Rocks area is late October through April. Avoid the area after rain storms; it is better hiked in dry conditions. The summer is too hot, and snakes can be an issue in rocky areas.

There are two primary ways to reach Seven Lakes Mountain from accessible roads. The most straightforward is to start on a dirt road approaching from the south. The fastest way to get there from Reno is to take 395 North to the northwest entrance to Red Rocks Road. Drive three and a half miles down the road, and turn left on Gymkhana Lane. Take it for a little over a mile and a half where it ends and meets Chokecherry Lane. 2WD vehicles can make it up another 1/3rd of a mile to Clydesdale Drive. But if you are skittish or the road isn't perfectly dry, just take a left on Chokecherry and park on the side of the road near the Gymkhana Lane sign.

A longer route involves starting at the Red Rocks just over the state line in Lassen County, California. You can hit both summits along the range, starting with the North Red Rock Summit. Getting there is easy. Off US 395, just head a half a mile and park at 39.90775, -120.0053 on the north side of the road. Follow directions from the North Red Rock Summit page to get to that summit.

For the south approach, if starting at Clydesdale Drive, simply head up the road as it curves towards the peak. After about ¾ miles it reaches a steep area and the road ends. A lesser road continues on the left side of a hillside. 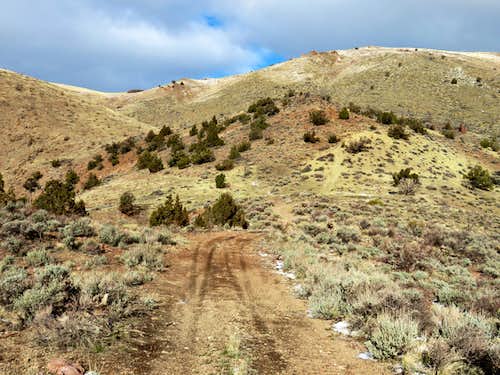 Nearing the end of the road towards Seven Lakes Mountain

Take the lesser road, but do not descend to much.  Walk up the left side of the hill and head up and over into the gully. Take this gully for less than ¾ miles and it becomes more open and you’ll see a rocky area. 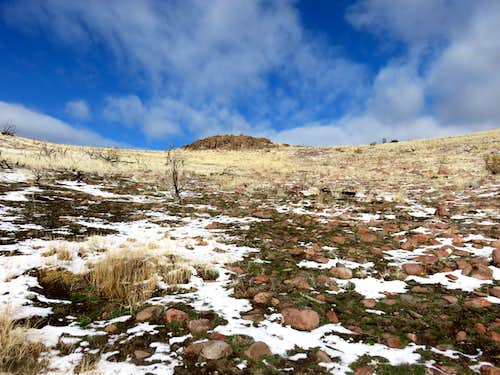 The rock at the top of the gully

Pass the rocky area on the right and you will reach the road. Take it for less than half a mile to the summit. 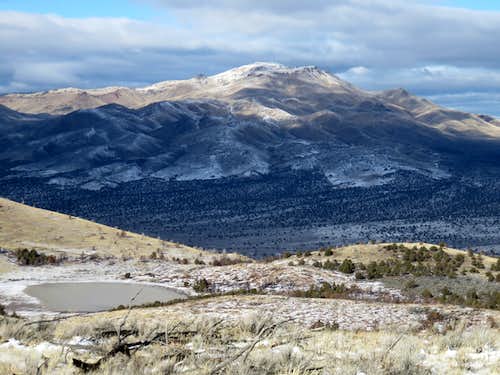 State Line Peak seen from Seven Lakes Mountain
If taking the longer approach from Red Rocks, you are starting in Lassen County, California. Start by heading to the North Red Rock Summit 5,794’. It has a prominence of 360’ over the saddle between it and Seven Lakes Mountain.

The summit can be reached in 1.3 miles gaining about 1,235’. From there, head east along the ridge-top for another 2 ¼ miles or so, passing a couple of the “lakes” on the way, until you reach a main road atop the ridge. Take this main road for a little over a mile to the summit. Before reaching this main road, you will find some lesser roads near the lakes, but these are not the main road. Most likely, the elevation gain will be closer to 2,000’ from this starting point. The total one way distance to Seven Lakes Mountain is +/- 4.6 miles. You can descend via the east ridge of the Northern Red Rock Summit.  Once you can see that summit, take the ridge heading down back towards the Red Rocks.  The round trip hiking distance is roughly 9 miles with some more ups and downs on the way back.

There is no red tape for either route. The lower parking area from the south route is on private lands, but it just an access road to BLM land. If starting higher up at Clydesdale, you are on BLM land. The Red Rocks parking area is on BLM lands.