When I hiked the Sierra Buttes in April I was more out of shaped than ever for the high country. Only a hike or two a month and lousy diet. I struggled so hard up the moderate trail I almost gave up several times. Too much dairy, dead food and not enough greens. I was clogged up. Then one day in May I got 24 hour stomach flu. You basically writhe around in agony for about 12 hours until the damn thing runs it's course. Couldn't eat or drink only water and heaves. The revelation next morning I felt cleared out in the lungs and went on a big change cutting the microwaved burritos, much less dairy and green smoothies every day. They're kind of like medicine. Bristling with so much vitality my body might reject them! ;) Getting out more, breathing better and even doing reps up the steep driveway where I live sees a more prepared hiker take to the slopes.

Decided to wait until after the busy 4th weekend. Knew the weather was going to be stormy. Had no pressing plans the weather would affect and the cloudy skies would be an interesting twist. Drove up Wednesday considering a few small peaks along Tahoe's west shore in the Desolation Wilderness area and north of it. If I started early I would be able to make the climbs before the usual summer storms build to a threatening degree. After a rest break from the drive north of Lake Tahoe I drove south along the west shore. It was after 5 pm so I managed to miss the numerous Caltrans cone zones indicating much construction work all along the west shore on Hwy 89 next day. The more I drove along the shore with all the businesses and houses I reconsidered, shifted gears and motored on down to south of the lake over (Lex) Luther Pass to my favorite spot in more peaceful Hope Valley just northeast of Carson Pass.

Unstable weather was afoot all around which made for good photo opps. There was still time to go to Carson Pass for a short ramble among the slabs and benches just north of the road. 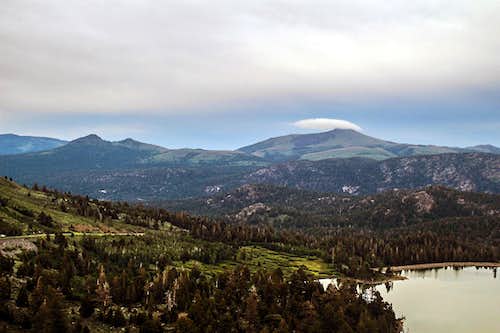 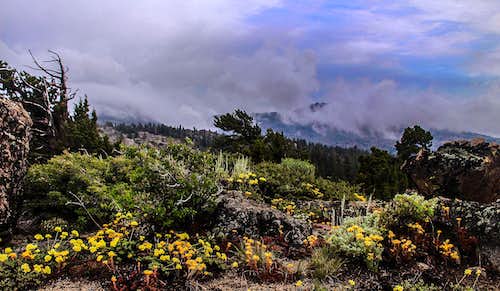 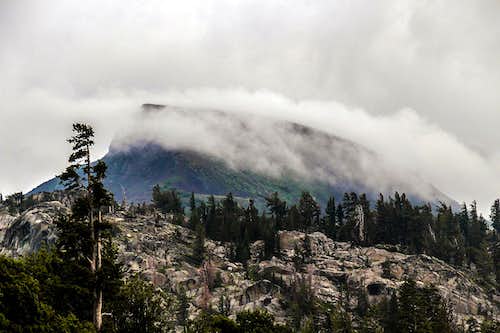 Elephants Back bathed in clouds 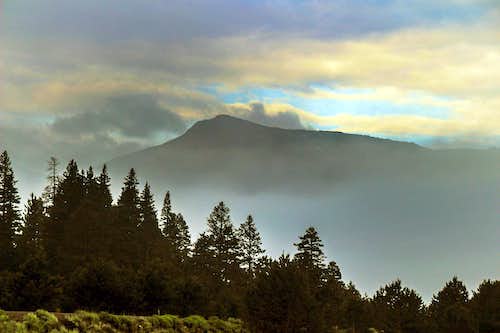 Stevens Peak above the mist of Hope Valley 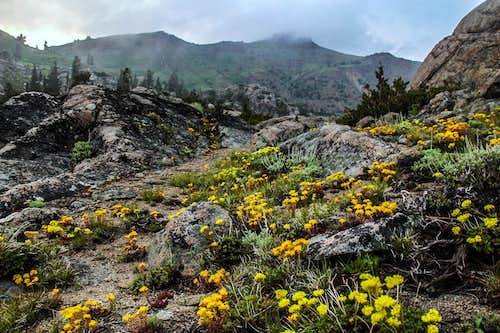 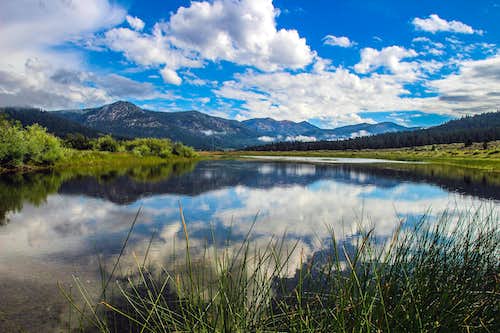 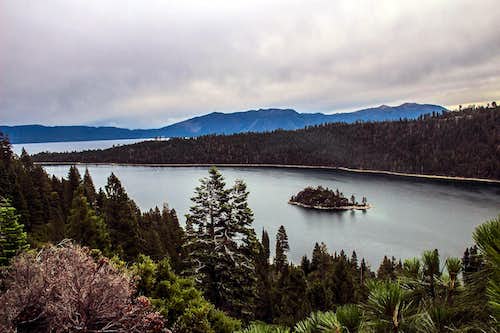 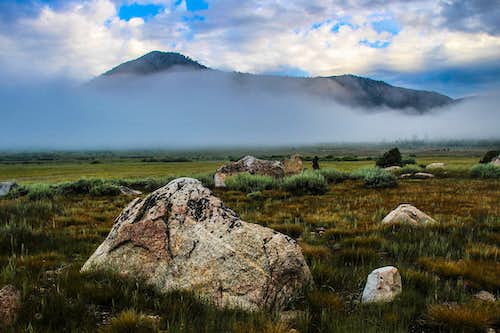 After a good meditation and good nights sleep I woke to still heavy skies. It was becoming apparent this was not typical summer thunderstorm pattern but a several day low pressure system that was affecting the whole Norcal area. Decided to drive up to Blue Lakes and see if I could manage a small peak close to the Blue Lakes Road where the PCT crosses. But the weather was worsening so I decide on Pickett Peak 9,116' back above the forest where I was camped.
It looked simple enough getting up the bumpy forest road and parking a mile or so from the peak below the west slope. Figured it was a forest walk-up to a volcanic talus scramble to the top. What was threatening Blue Lakes had moved a few miles closer. I was no match for it's speed or what it would bring. But that was not my concern because about half way up beyond the trees was a nice little section of chaparral. Thick gnarley little pines and low stuff you just can't muscle though.
Here we go again. I can see the rocks of the upper peak peeking through the brush way up there if I can find a way through this shit without having to traverse....traverse??..."look around son you is trapped in our house!" said my gnarly little friends.  Then it starts to hail. Now it's "ok you came this far so"....time, so I pressed on. The tough mountain foliage gave me a pass and let me crawl through up to a clearing. The brief hail squall left a white crunchy mat to walk on and the sun kind of came out. The bounty of flowers on the upper slopes was an unexpected bonus. The summit views were quite spectacular because of the cavalcade of low pressure systems dancing everywhere about the mountains and sky. 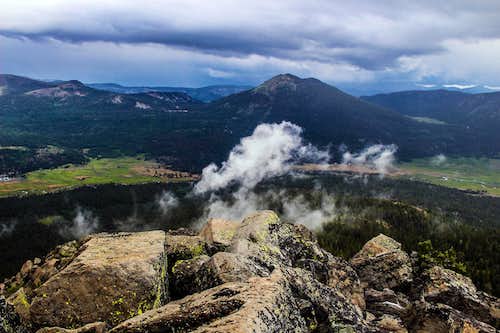 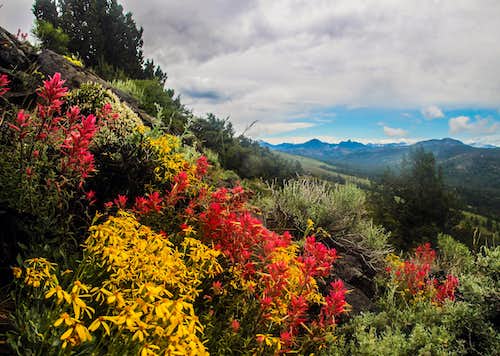 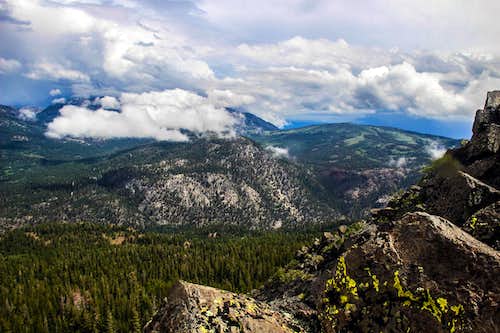 Carson Range under cloud from Pickett 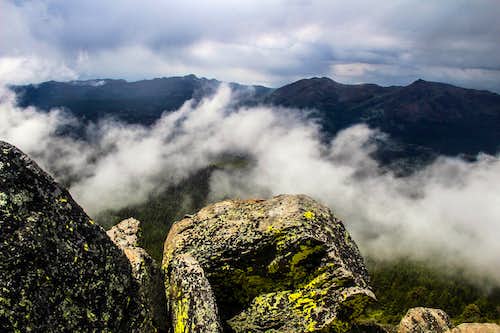 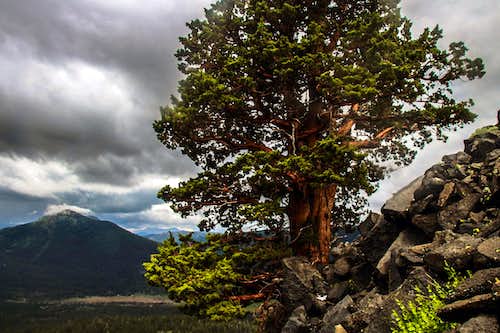 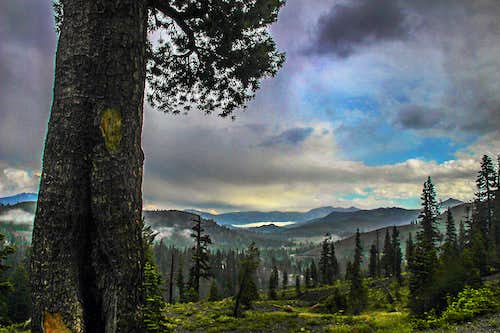 That afternoon I drove back to South Lake Taco to get some supplies. Got a power converter for 50 bucks at an auto supply that powers the laptop on the road for your information.
Checked the weather again and it looked to be getting even worse tomorrow. I drove back down to Hope Valley and settled in for the evening. It was starting to rain and getting colder. A warm shower sounds nice. Did I really want to stay another night only to get stormed out all day? Let's see......I "should" stay. Came all this way. "Soldier on! Where's the mountaineer here dude?" "I should stay and do another peak, maybe put up a mountain rock on it." Nothing stopping me from staying.
Nothing stopping me from leaving either!
With that logic I caved and hit the road.
6 pm, no traffic, be home by 10.
Rained like hell on US Route 50 all the way to the Sierra foothills and had even rained pretty good up in the higher terrain of Lake County when I got back. This was one week after an extended heat wave wiped out all the box fans in stock at the Clearlake Walmart. I should know 'cause I got the last one.
Live to shuffle among the storms and peaks another day.

So many beautiful pictures. I really enjoyed this presentation, well done.

Thanks a bunch Dean. It was a good time up there is spite of the weather. Not that much lightning and spectacular skies.

A wonderful collection of pictures. Thanks for sharing!

You're very welcome Alberto! A refreshing few days in the Sierra it was.