The Sierra Madre is one of the least known ranges in Wyoming and Colorado. Just about all of the mountains in the Sierra Madre are little known as the Sierra Madre is far from any major population centers and is not as high or as rugged as some of the other ranges around, such as the Medicine Bow Mountains, Park Range, etc., thus it gets little attention. There are no big towns or cities in the area.

The mountain range receives heavy winter snows, but the highest summits just touch timberline. Most mountains are rounded domes rather than jagged peaks, but surprisingly, there seems to be a lot of good rock climbing in the range (though few have ever tried to find out). Pink, red, and white granite abounds in the range and the rock seems to be quite solid as well. Although there are many places suitable for technical climbing, it seems that none of the peaks are technical via their easiest routes.

Much of the rock in the range is 1.4 to 1.7 billion years old. As mentioned, there is granite, but also many metamorphic and sedimentary rocks as well. There are even a few volcanics.

The Sierra Madre is fairly popular for hunting in the fall and contain large populations of deer, elk, bear, etc.  Because of hunting, fall is the most popular season in these mountains. Because of the fairly new Continental Divide Scenic Trail, these mountains are beginning to see more attention as they do form a section of the Continental Divide.

There is much confusion as to where the boundary between the Sierra Madre and Park Ranges is and all the maps I know of show that it does extend into Colorado, despite some written information to the contrary.

Because of the confusion of the boundary between the Park Range and Sierra Madre, there is even some confusion as to what the highest peak in the range is and one could make the case for either Bridger Peak (11,007 feet/3355 meters elevation) on the Wyoming side or Buck Mountain (11,396 feet/3474 meters elevation) on the Colorado side. Most maps, including the USGS 1:24,000 scale map label Buck Mountain as being in the Sierra Madre, while the USGS 1:250,000 scale map labels it in the Park Range. The 1:100,000 scale map isn't clear either way. Joseph Kramarsic's book, which included much of the history on the mountains, says the boundary between the Park Range and Sierra Madre is the North Fork Elk River and the Encampment River. This seems logical and would put mountains such as Black Mountain, Buck Mountains, and Farwell Mountain in the Sierra Madre. Lake Diana with the slopes of Buck Mountain in the background.

There is also some mining history in the range, mostly related to the Ferris-Haggarty copper mine which dates to the late 1800’s and early 1900’s.   Much of the range south of SH 70 is part of the Huston Park Wilderness Area. 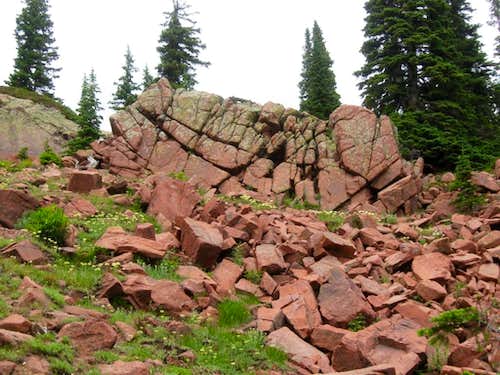 Some of the red granite in the Sierra Madre. This is on Red Mountain. 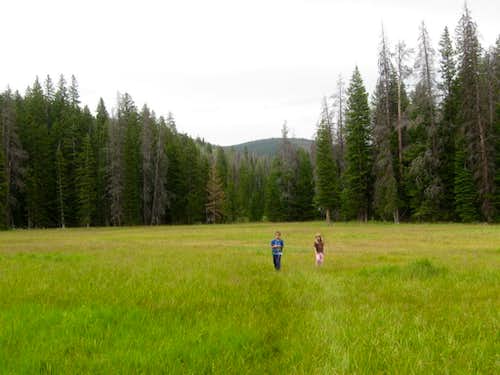 Typical scene in the meadows of the Sierra Madre. The range doesn't have that many rugged mountains, but does have many meadows, ridges, rolling summits and even cliffs scattered about.

The major access road is WY State Highway 70, which crossed the Continental Divide between Baggs, Dixon, and Savery on the west; and Riverside and Encampment on the east.

Many Forest Service Roads branch off from SH 70.

The highway is usually closed from November 1 through around May 31, so winter and off season access to these mountains can be difficult.

The Colorado side of the range is accessed from north of Steamboat Springs and from various side roads off Routt County Road 29. 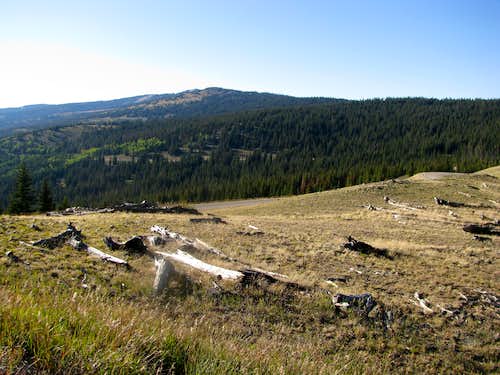 Battle Pass, which is on the Continental Divide along SH 70.

Standard Wilderness Regulations apply within the Huston Park Wilderness, which covers much of the range.

• Camping within one hundred feet of any lake, stream or trail, is prohibited.

• Possessing a dog or other animal that is harassing wildlife or people or damaging property is prohibited. There is no leash law in the Huston Park Wilderness, however dogs must be kept under verbal control at all times. 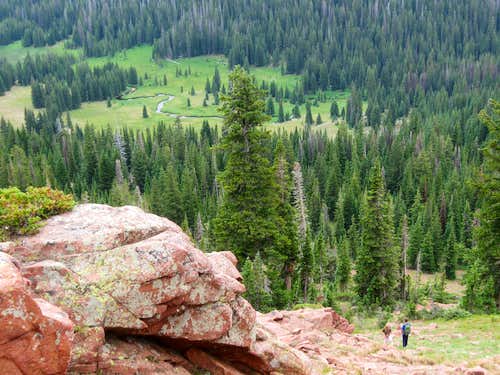 There isn't much Red Tape here, but there are many red rocks.

Outside the official campgrounds, there are many informal campsites. Backcountry camping is permitted as well. Make sure to leave a clean campsite. 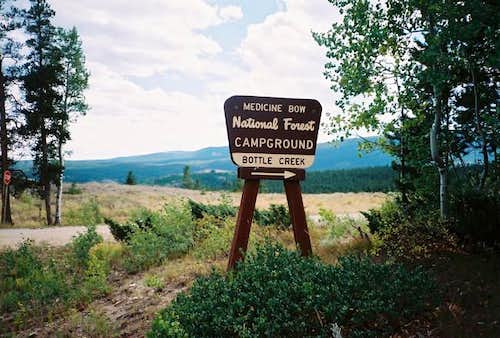 July through early September would be considered the normal season to hike and climb here. Bring mosquito repellent early season!

As mentioned, these mountains receive very heavy snowfall and the Sierra Madre is a very popular hunting destination in September and October so use extreme caution at this time of year, and wear blaze orange.

This region would be ideal for cross country skiing if it weren't for the fact that winter access is so difficult. Access to a snowmobile will make this a much easier destination to reach. None of the roads that reach high into the range are open in winter. 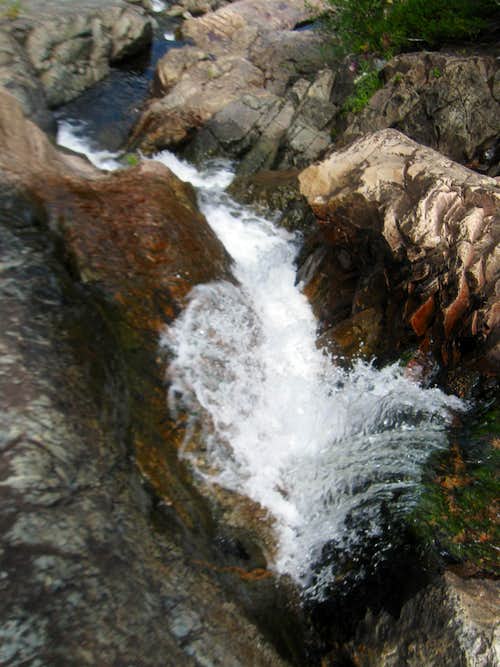 Part of the Green Mountain Falls, one of the places to see in summer while in the Sierra Madre.

Below is the National Weather Service Climate Summary of Dixon/Baggs, on the Wyoming/Colorado border. The data is from 1922-2012. This is one of the closest long term weather stations, but be aware that higher elevations will be much wetter and colder. Dixon/Baggs is at 6370 feet elevation, so expect the temperatures on the highest peaks to be 10-20 degrees colder than in Dixon. 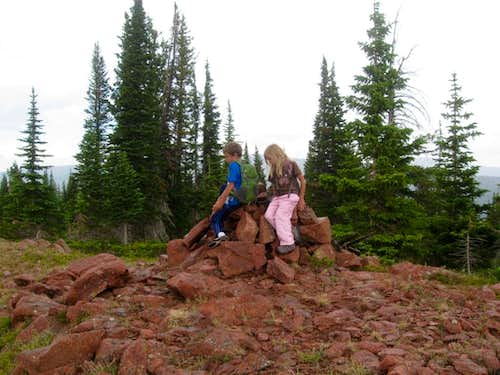 The summit of Red Mountain in the Sierra Madre.