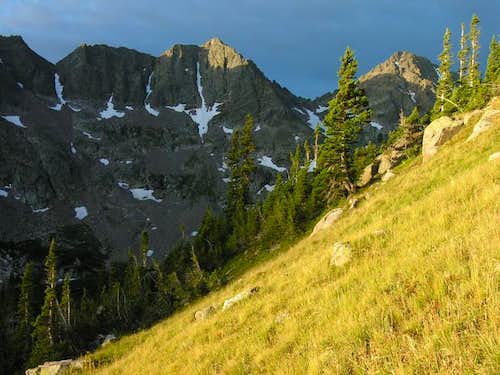 Colorado’s spectacular but barely known Gore Range is host to many alpine summits over 13,000-ft and many more summits over 12,000-ft. In the relatively short stretch from Gore Pass in the north to Tenmile Creek in the south, the Gore range is densely populated with 50 some mountains over 12,000-ft. The Gores, rather then consisting of large isolated mountains rising from the timber or tundra, consist instead of dramatic serrated ridges, with the summits being ridge junctions or highpoints. These dramatic ridges are riddled with gnarled, tooth-like spires that have mesmerized many world-class climbers.

Geologicaly the Gore Range is a fault-block mountain range. Similiar to the Sangre de Cristos of Colorado and the Tetons of Wyoming in that these ranges are bounded by faults that broke and shifted, thrusting up the mountains while downdropping the valleys. Although the rock is similiar to the Idaho Springs Formation of the Front Range, the rugged Gore's contrasting orogensis makes these mountains look quite different from the glaciated folded anticline that makes up the Front Range. Glaciers played an even more extensive role in carving the cirques and spires that abound in the Gores compared to adjacent ranges. Many of the drainages are choked by large terminal moraines at their lower reaches and cut by successive headwalls higher up. Many headwalls are graced with gorgeous waterfalls. The most dramatic summits and aretes are often located at the head of multiple glacial cirques.

A result of the Gore Range's obscurity is that few of the summits are officially named. The Colorado Mountain Club and enterprising climbers have often bestowed their own names. These unofficial designations often are the "alphabet" designations of the early CMC trips (relics of the 1930's) or the more inspired names that came later on (The Spider, Mount Solitude, etc). Some of the most colorful designations are credited to Robert Ormes. A complete list of these names and their elevations can be found at Gerry and Jennifer Roach's wonderful website. The process of educating one's self about these mountains is quite rewarding. Hand label your maps.


Please see Theron Welch's excellent page on the Gore Range for more information. His photos and descriptions are inspiring and informative. Thank you Mr. Welch. 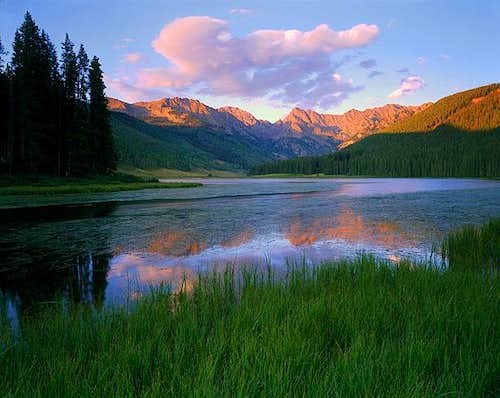 The view up the Piney River Valley. Photograph by BrentD 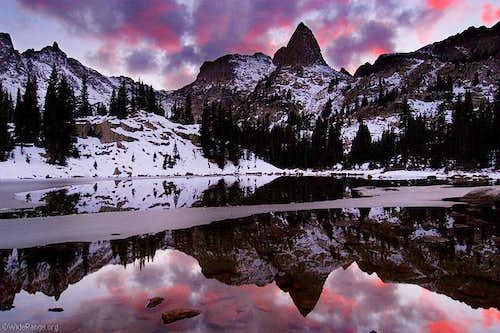 Part of Mount Valhalla from Rock Creek. Photograph by JackB

The Gore Range is almost completely encompassed by the Eagles Nest Wilderness. This 133,325 acre Wilderness Area was established in 1976. It is popular (especialy the Vail side) but wilderness protection has granted a lasting pristine quality that is palpable. Despite the network of access trails, many drainages (the upper reaches in particular) remain trail-less. Wilderness regulations do apply; please follow them as this area is a real treasure.

Wilderness Regulations
No permits or fees are required. Like all wilderness areas no mechanized or motorized vehicles are permitted within the Eagles Nest boundaries.

For more information, contact the U.S. Forest Service at the #'s below: 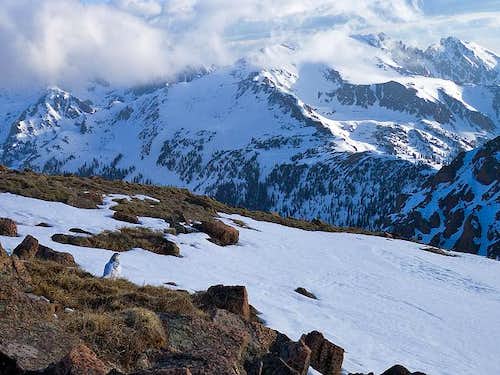 A Ptamagin in repose on Deming Mountain before a rolling storm. Photograph courtesy of Jim 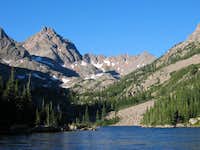 The Gore Range is possessed of 102 named or unofficialy named summits located within the confines of the Eagles Nest Wilderness. 42 of these summits have enough prominence (300 feet difference between highest saddle and summit being the standard for rank in Colorado) to be ranked. More summits can be found in the nearby South Gores as well. The unranked summits are often just as dramatic as their brethern. This plethora of mountains makes for almost unlimited outdoor activities. The southern edge of the Gores offer severeal gentle summits that offer attractive noncommital hikes anytime of year. The rugged interior offers one of the largest alpine playgrounds for scrambling on rugged rock to be found in Colorado. This abundance of non-technical climbing has earned the range a reputation for being "always exciting yet seldom desperate". A few of the spires and ridges are likely technical. Mountain lovers of all stripes should be able to find something to savor in the Gores. 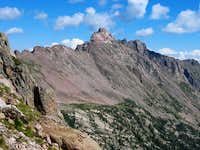 Technically this mountain should be attached to the Gore Range. The Gore Range extends all the way to Rabbit Ears and Muddy Passes, and Baker Mountain is the northern-most peak in the Gores, though north of the Colorado River, all the peaks are gentle and rolling rather than rugged. Since the peaks are so different in the north half and south half of the range, it might make sense to divide up the range into an "Eagles Nest Wilderness" and "Northern Gore Range" page, but this might also cause confusion, and it is doubtful many pages would be added to the Northern Gores since they just aren't near as visually impressive. Maybe just mention the Northern Gores on this page. Great job on the page so far. It looks great. I hope to get into the Gores a lot more this Spring and Summer.

Hmm, I had been assuming that the northern boundary of the Gores was Gore Canyon but after reseaching it a little more thoroughly I see you are right. I have the same issue with the South Gores (Jaque Peak south to Buckeye Peak). I think I may add a chapter on these two subsections. I haven't been into the northern Gores at all, if you want to help with a description of that area I would appreciate it. I'll try and finish the page in the next week or so. Thanks for your input Scott

I don't know too much, but did a few hikes including Rock Creek one Fall and Walton Peak yesterday. Briefly put (if you wanted to use this): The Gore Range actually extends from north of Leadville to Rabbit Ears Pass, but the northern half of the range (north of Gore Canyon and the Colorado River) bears little if any resemblance to the more rugged peaks to the south. The northern Gore Range consists of a large forested plateau, and rolling peaks and hills. None of the peaks in the northern Gores rise to timberline; the highest peaks in the northern section are below 11,000 feet elevation.