At least two sources indicate that the Park Range extends 200 miles from Carbon County, Wyoming to northwestern Park County, Colorado containing the following sub ranges listed from north to south: Sierra Madre, Gore, Tenmile and Mosquito. Because the Park Range has three major geologic interruptions, it is divided into four smaller ones listed north to south: North Park, Gore, Tenmile and Mosquito.  Since the other sub ranges are already discussed on summitpost, the remainder of this page will focus on the North Park Range which begins at the terminus of the Sierra Madre Range and extends 40 miles south along the Continental Divide as well as Jackson and Routt Counties. It separates North Park on the east from the Yampa River basin from the west. The North Park Range is the snowiest in the state and averages 500 inches of snow annually. Steamboat Ski Area sits on the southwestern end of the range, at Mount Werner's base. Much of the North Park Range is contained within Routt National Forest. The range's summit Mount Zirkel is located within the Mount Zirkel Wilderness of the Routt National Forest. The North Park Range is prominently visible from the east and west. From North Park, the range forms a picturesque skyline. US 40 traverses the southern end of the range over Muddy Pass and Rabbit Ears Pass. The North Park Range is also traversed by Buffalo Pass, which connects Steamboat Springs and Walden. 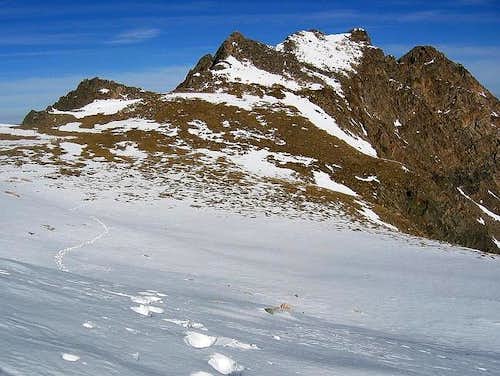 Mount Zirkel. Submitted by Colonelpyat
The North Park Range is a range of contrast. The northern portion contains some of the most rugged peaks in Colorado, and some of the most challenging to climb as well. The mountains generally gradually diminish in ruggedness and height the farther south you go. Between Buffalo Pass and Rabbit Ears Pass, the range takes on the appearance of a rolling forested plateau rather than a rugged mountain range.

Similar to the Gore Range, Medicine Bow Mountains and remainder of the Front Range, the North Park Range consists primarily of Precambrian basement rocks upheaved during the Laramide Orogeny. The basement rocks were formed by deformation and metamorphism of sedimentary and volcanic rocks. These are some of the oldest rocks in the state; some may be 1.8 billion years old. The volcanoes erupted 1.7 billion years ago near what was then the south end of North America. 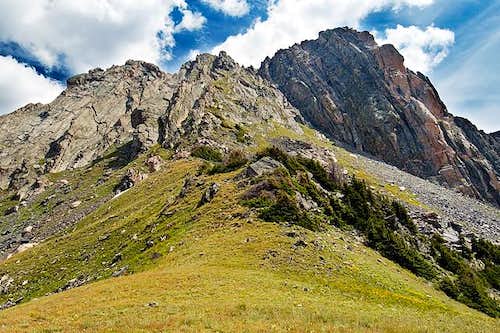 Mount Zirkel.  Submitted by Jack B

The North Park Range actually has many different mountain climbs, from technical peaks to rough scrambles to hikes with trails. Most of the peaks, however, have at least one non-technical route, though many technical routes are available.

Many of the peaks in the North Park Range are rounded and gentle, but a few are quite rugged and steep, and in contrast to most of the surrounding ranges, much of the rock is good for climbing.

The North Park Range has some excellent long distance backpacking. Many shuttle and loop hikes are possible.

Many peaks are relatively unvisited, such as the Sawtooth Range, but peaks such as Mount Zirkel are popular climbs, though most people seem to stick to the trails and lakes instead of climbing peaks. The moral of the story is that many peaks are popular, but if you look for solitude, you will find it, and if you want pleasant, but relatively popular trails, you will find those too.

Ice climbing is popular at Fish Creek Falls, located near Steamboat Springs and on the west side of the range. Some short but popular technical rock climbs are around Buffalo Pass and also at the Domes near Rabbit Ears. Excellent rock climbing in a backcountry setting can be found on Mount Zirkel and the Sawtooth Range, as well as the surrounding peaks. 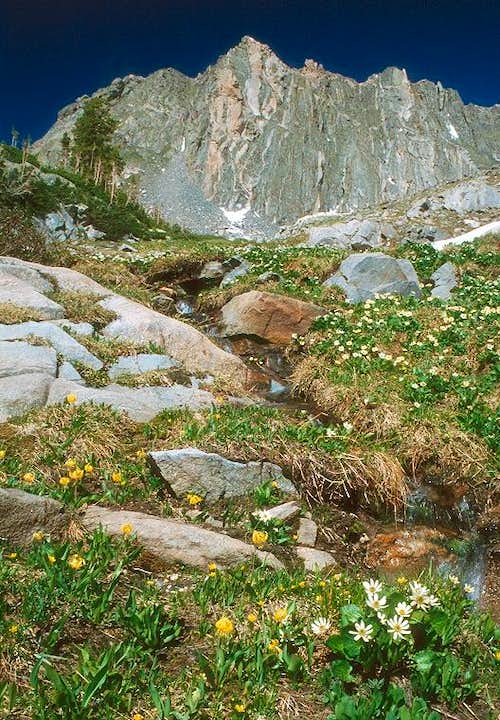 The west face of Mount Zirkel from the Gilpin Creek basin.

For the Mount Zirkel and Big Agnes Mountain area, Seedhouse Campground is located along Seedhouse Road (CR 64 and NSFR #400). To get to Seedhouse Road from Steamboat Springs, travel two miles northwest on US 40, turn right onto Elk River Road (CR 129) at the stoplight and travel north eighteen miles to Seedhouse Road.

The North Park Range receives much snow, and in fact is the snowiest range in Colorado, so despite the lower altitude than the 14ers, the peaks remain buried in snow until mid-July. Skis or snowshoes are recommended in June. The North Park Range has many mosquitoes in July, and sometimes into early August. From September and into December is hunting season, so wear blaze orange and use extreme caution.

The North Park Range is the only mountain range in Colorado to average 500 inches of snow per year. Snow data is taken at Buffalo Pass.

Below is the National Weather Service Climate Summary of Steamboat Springs. The data is from 1908-2005. This is the closest long term weather station, but be aware that higher elevations will be much wetter and colder. Steamboat Springs is at 6695 feet elevation, so expect the temperatures in the Park Range to be 15-25 degrees colder than in Steamboat (except for cold winter nights).