The NE Couloir of Lone Peak is a bucket list 'hardcore' ski mountaineering line in the Central Wasatch. It definitely rivals with some of the best ski lines in the continental US. The line itself is somewhat of a 'white whale' for skiers in the Wasatch. It's talked about often, but only skied by a few parties each year. The access is difficult, conditions need to be just right and there is certainly an intimidation factor. It is a line that belongs in the Alps. The couloir extends for almost 2000' from just below the summit into Bells Canyon. With a maximum angle of ~50 degrees near the top and sustained ~45 degrees through the rest of the couloir. Just when you think it can't get much more intimidating than that, you are greeted with a HUGE cliff at the bottom... Just to make sure you really don't have any thoughts of falling. Lone Peak lives up to it's reputation for being awesome and frightening.... Especially from floor of Bells Canyon, underneath the rugged East Face. 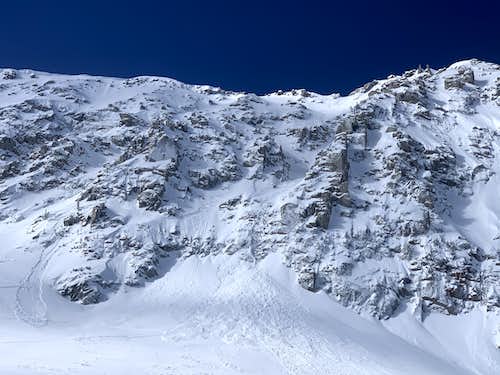 There are several FEASIBLE ways to approach the summit of Lone Peak winter conditions. The easiest & safest option is to approach from the South side, near the tiny town of Alpine and go up a 30-35 degree slope, named 'Heavens Halfpipe'. Once the ridge is reached, it's an easy skin or boot along the ridge to the couloir. The problem with this choice of ascent: You cannot assess snow conditions, as the aspects are completely different. Additionally, while you could test out the snow from the top, a 2000' difference in elevation can do alot to change the snowpack. Another approach, is via Big Willow Cirque, which also poses problems with snowpack assessment. Our choice was to approach from Bells Canyon, boot straight up the NE couloir to get a feel for snow conditions & ski the line as high as we felt comfortable based on snow conditions. If we were lucky, afterwards, maybe enjoy some more skiing off Coalpit Headwall :) 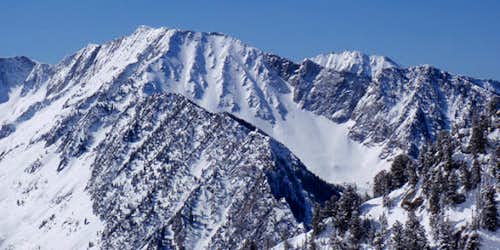 We started early by our standards (5AM) from Bells Canyon Trailhead. Bells canyon sits at around 5000', which is quite low, compared to the summit at 11,200. 5AM might seem late for an east facing line, 6000' above... However, my partner Adam and I can move fast when we are motivated. This particular morning we were EXTREMELY motivated and we made it underneath the East face around 7:30AM for a beautiful sunrise. From there, our objective lay above us..... 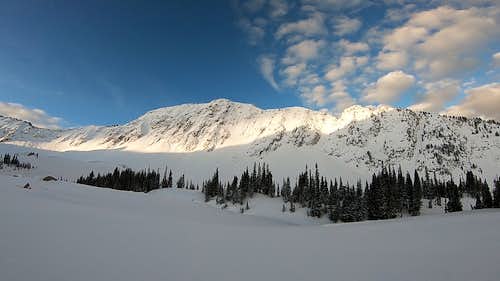 Underneath the chute, it was very difficult to assess the route to enter the couloir. Climbing up the cliffs to enter the NE was not an option, as we were not equipped for anything above 4th class scrambling & steep snow. I found a sneak option, that went up lookers left and traversed North into the couloir proper. This would turn out to be our ski line as well. 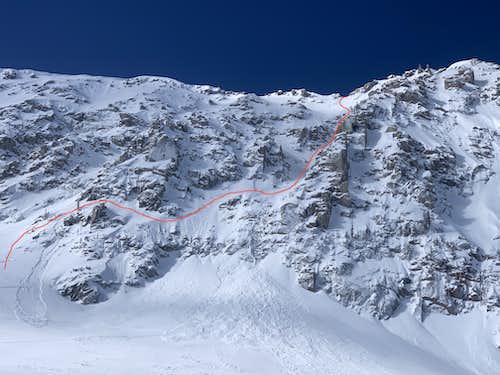 To start, the climbig was incredibly steep & exposed, but once we were out of the crux things became significantly more comfortable.The snow was deep, but powdery, with a bit of a stiff surface on the bottom. We kept our crampons on and continued up the chute until we were about halfway. From our judgement, the snow was bonding well and we were observing no signs of instabilities.... We were really happy that conditions were turning out to be on point with what we predicted. 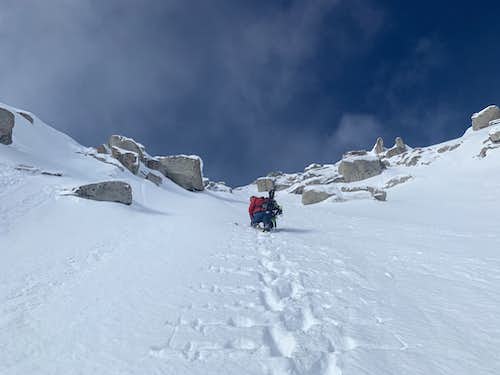 From the halfway point, we switched to Verts (ski mountaineers snowshoes) as the snow got deeper & softer. Post holing with crampons was deemed impossible.... it was a steep & powder filled booter to the top. 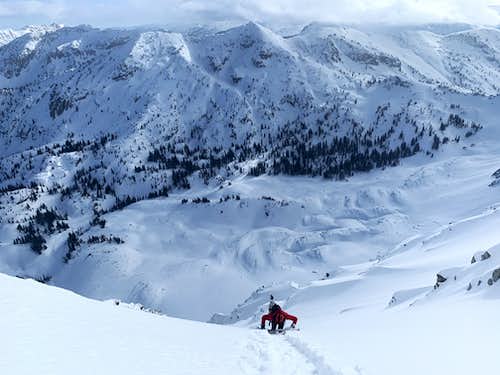 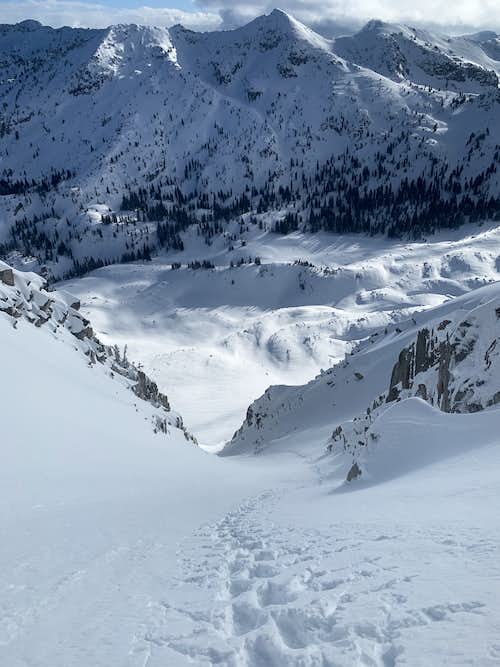 Once on the ridge, it was an easy, but exposed scramble onto the main summit. Only a few moves of 4th class... Big difference from the classic summer scramble. 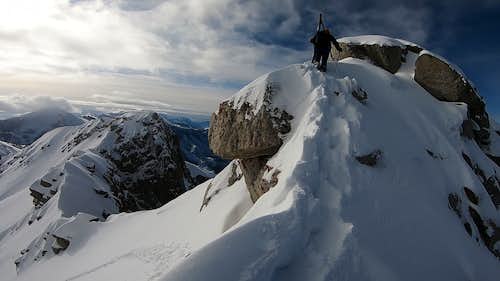 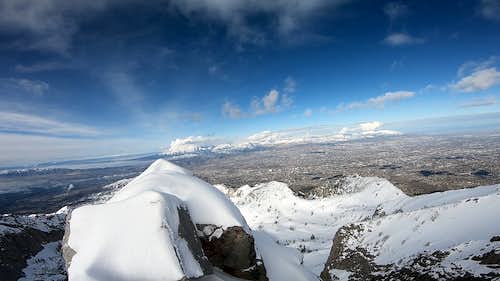 We were dropping into our line around 9:00AM, just before the sun started really warming the east face.... Our timing was excellent, moving at roughly 1500' per hour, despite breaking trail up the entire couloir. Usually we tend to over-idealize our ascent times, not factoring in the 'weirdness coefficient' :) This time we nailed it and were incredibly satisfied with how the day was progressing. As we got back down to the ridge, I felt the surge of adrenaline knowing we were about to ski our steep ascent. The urge to poop was strong. After a few deep breaths, the descent went exactly as expected and I did not shit my pants. I'm sure that would have been a great video to share on summitpost, but all I have is the skiing:

From the first turn, all thoughts of falling over the massive cliff at the bottom faded away. The conditions allowed for an easy and one of the best ski descents I've had in the Wasatch. My partner said it was his favorite line EVER... Clearly, he's never been to many other ranges in the US :) Although, it was GOOD! Towards the end of the run, it was an easy traverse above the cliff and onto the apron of the east face. Once we reached the flat part of the drainage, we skied across Bells Canyon, skinned up the Thunder Ridgeline and traversed North into the Coalpit Headwall. A little wizardry by Adam to get through some cliff bands & onto a fresh line off the headwall. 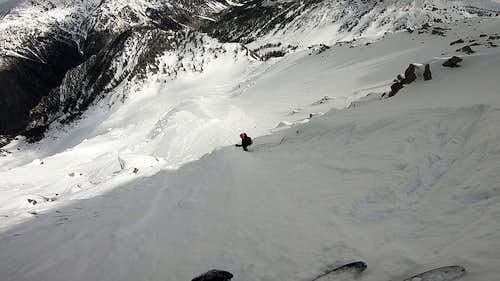 Skiing through the cliffs and rocks was ultimately the right call, we had our own line down another Wasatch Classic. Doesn't get much better than today.... 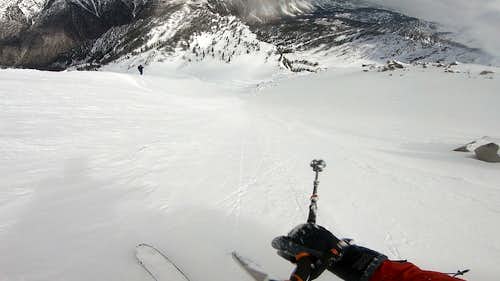 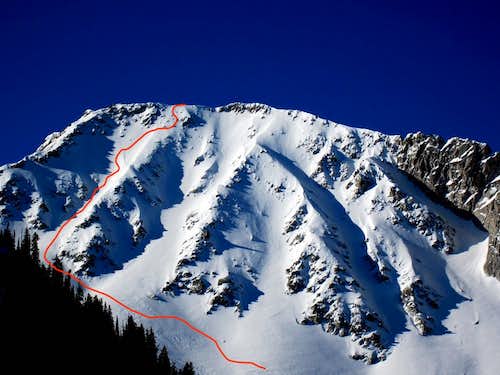 At the bottom of the headwall, it was a fast & smooth 3500' down the coalpit drainage, where the north facing snow stayed soft and edgeable the entire way - A rarity in late March. 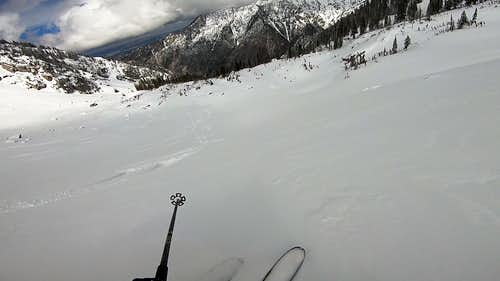 We skied the coalpit drainage all the way back to the Little Cottonwood Creek. Adam really didn't want to take off his skis.... even where the skis didn't belong.... 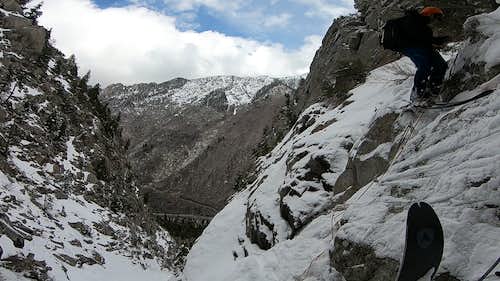 Besides the classic waterfall obstacle, coverage was so good, I managed to scrape by with no core shots..... which I usually get 2 or more when I ski out of Coalpit. At the LCC road, Adam's wife was waiting for us.... Ahh... It's nice to have ski partners with awesome wives :)

Hope you enjoyed the trip report, we are lucky in SLC to have this range in our backyard!