PAROFES
Add photos See all photos
Well...here we have some great mountains of South America. This continent has a lot to show you and believe me, you can be amazed by its fantastic landescapes and high mountains.
Some mountains are not listed here because there is no page on SummitPost for them yet, but as soon as someone does it, I'll update the page so we can enjoy a complete page with a complete list. 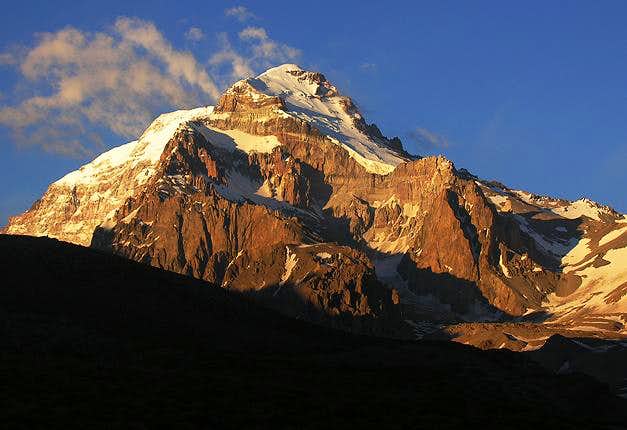 Aconcagua is the highest mountain in the Western hemisphere, located in western Argentina, near the Chile border. There are about 3,500 climbers trying the summit each year (info from 2002). The 'Normal Route' is non-technical - a walk-up, following the Northwest Ridge. It is the altitude that poses the most problem. That and the sense that this is an easy climb. Every year people die because they underestimate the task at hand...Keep reading about it on the mountain page on SP.

One of the most popular climbs in the owrld. WORK IN PROGRESS 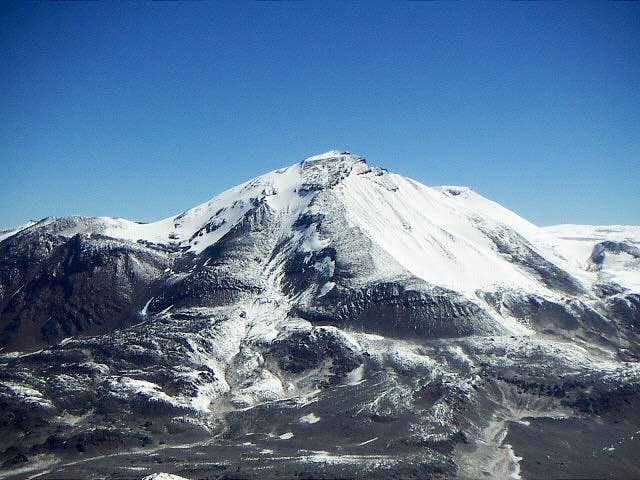 The highest volcano on earth is also the highest point in Chile and second in South America. As the volcanic activity is quite recent, it´s classified as a neovolcano and there are still minor activity on the peak. Larger amounts of sulfuric gases and vapor were seen as late as 1994, but normally a faint smell och sulfur is the only sign of volcanic activity on the peak. Ojos del Salado is a border mountain and can be climbed from both Argetina and Chile. If you don´t like red tape, a hefty peak fee and bureaucracy, Argentina is the place to go for. If you rather pay a bit, prefer to travel high on the mountain in a jeep...Keep reading about it on the mountain page on SP.

Not very popular yet, and that is a good thing. 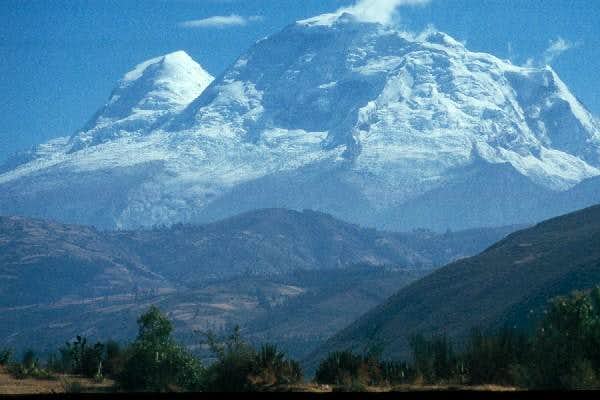 Together with Chopicalqui, the twin summits of Huascarán form the Huascarán massif. Huascarán Sur is the highest mountain in the Cordillera Blanca as well as in the whole of Peru, and consequently quite popular. The south summit is 91 meters higher than its (much less frequented) northern twin. The saddle between them, Garganta, lies at 6010m...Keep reading about it on the mountain page on SP. 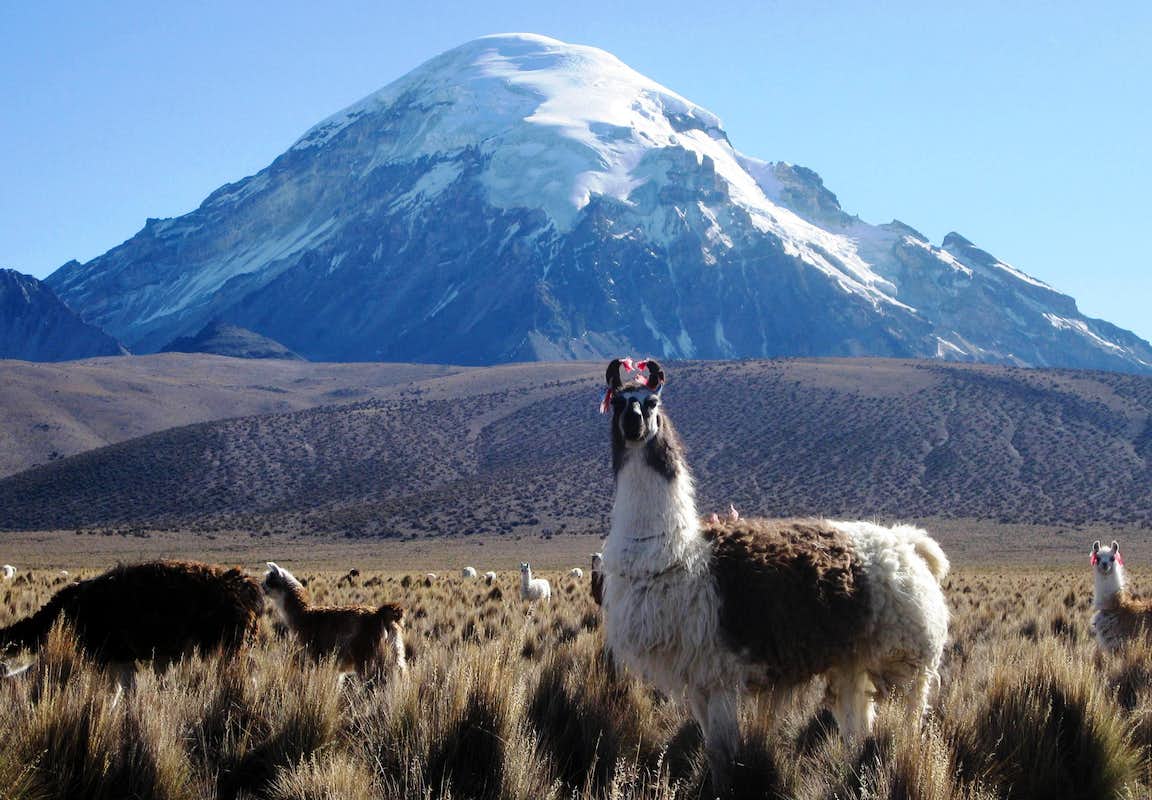 Sajama is Bolivia's highest mountain (by about 100m) - an extinct volcano situated in the eponymous Sajama National Park, on Bolivia's South-Western border with Chile. The volcano has been (fortunately!) extinct for the past 10,000 years. The summit is covered by a permanent ice cap hiding all trace of any volcanic crater...Keep reading about it on the mountain page on SP. 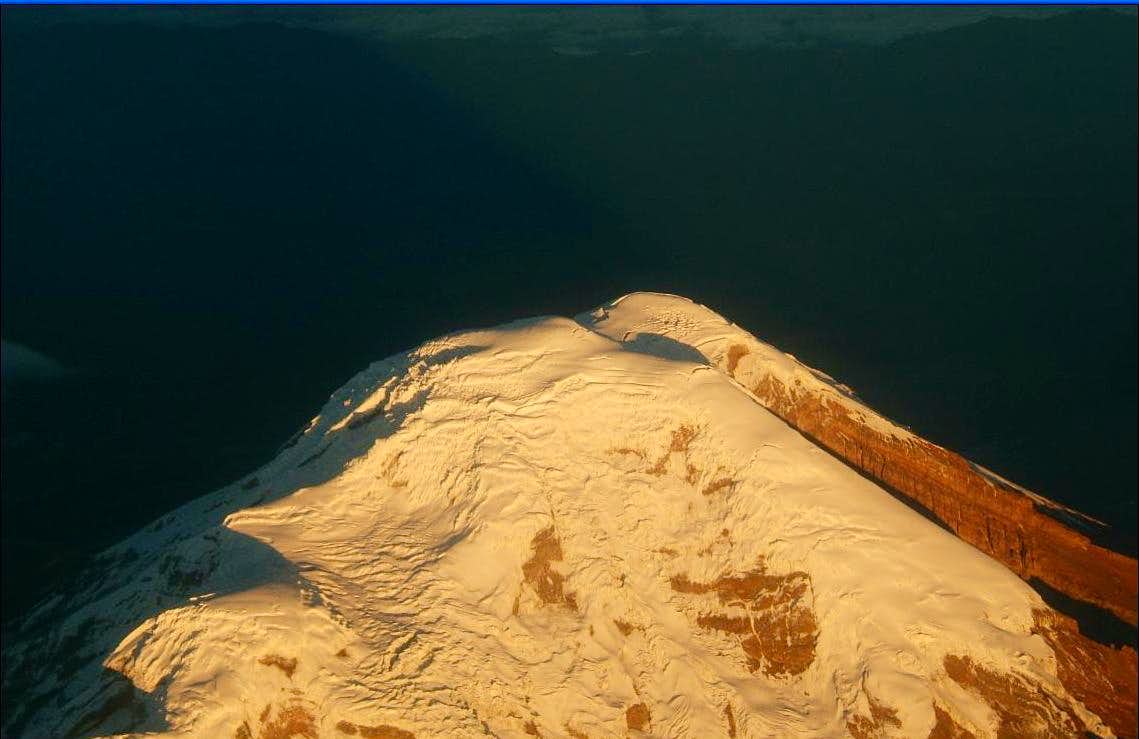 Longtime considered as the highest mountain on the planet, Chimborazo was dethroned by the Himalayan and Peruvian peaks. Nevertheless, considering the geometry of the Earth, this summit is known as the farthest point from its center (see section below for full explanation). This huge mountain is the highest point in Ecuador. It has five summits, the highest culminating at 6,310 meters (20,702 ft.). There are many routes up its slopes. The normal route runs up the Southwest flank and is a variation of the original Whymper route...Keep reading about it on the mountain page on SP.

Also often climbed, very popular mountain in South America and "most wanted" in Ecuador along with Cotopaxi volcano.

The highest Peak in Colombia is in debate.

Both altitudes are questionable since no one (not even locals) have climbed these mountains for over 20 years.

To read more, an article I wrote here on summitpost: https://www.summitpost.org/i-used-to-think-brazil-was-bad-not-anymore/678167


The highest point of Venezuela is Bolivar Peak.

In fact, there was a mountain page online here at SP but I can't find it, maybe the owner deleted it.

Altough, there is still a route page for the north face of Bolivar Peak available here on SP, check it on: https://www.summitpost.org/north-face-vinci-route/224141 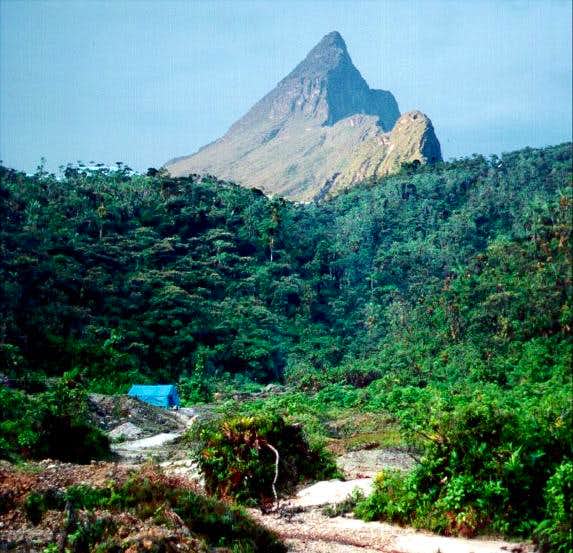 Pico da Neblina (Fog Peak) is the highest mountain in Brazil, 2.994 meters above sea level, in the Imeri mountain range (Serra do Imeri), a section of the Guiana Highlands on the Brazil-Venezuela border. As determined by a border survey expedition in 1962, its summit lies barely within Brazilian territory, at a horizontal distance of a mere 687 m from the Venezuelan border at Pico 31 de Março. The latter peak is only 21 metres lower and Brazil's second highest mountain. The word neblina means "fog" in Portuguese; so, the peak's name (meaning "Peak of the Mists") reflects that it is shrouded in dense clouds most of the time. It was first ascended in 1965 by members of a Brazilian Army expedition...Keep reading about it on the mountain page on SP.

Its Park is currently closed for visitors. Every now and then people get stuck at indians's hands, dangerous to try it without a guide.

Roraima is an interesting mountain located in the Guiana Highlands. The peak actually shares the border with Venezuela, Brazil, and Guyana, but the mountain is almost always approached from the Venezuela side. The Brazil and Guyana sides are much more difficult. The Guiana Highlands is a very unusual mountain range covering parts of Venezuela, Brazil, Guyana, Suriname and French Guiana. The highlands are made of ancient sedimentary rock that is over two billion years old and are some of the oldest sedimentary rocks on the planet...Keep reading about it on the mountain page on SP.

Often hiked by hundreds and maybe thousands of people every year, but you can't do it alone, travel agency service is demanded.


The highest point of Suriname is Juliana Hill (aka Juliana top).


Rob (SPer RGG) did a small research on this particular mountain, and here's some thoughts of his:

The research taught me that Julianatop is located in the Wilhelmina mountains. The source of these two names is obvious: Wilhelmina was queen of The Netherlands from 1990 until 1948, when she was succeeded by her daughter Juliana who reigned until 1980. Perhaps the mountain had received a name by the indigenous population before the Dutch colonized it, but if it did, I didn'tfind it.

The Wilhelmina mountains lie deep in the jungle in the middle of the country and the summits are still covered by dense jungle. Google terrain view places the summit of Julianatop at 3.683°N / 56.535°W. The jungle makes it very hard to get there and consequently the mountain sees very few attempts.

Several sources claim that the summit is 1230m high, not 1280m. A very short article in Wikipedia.nl states 1280m (retrieved on 6 February 2012), but as source it refers to the "Wereld Bosatlas", a popular Dutch atlas, but notoriously unreliable for elevations. For example, my copy of the Bosatlas (from 1997) states that La Neblina is 3100m, and Illimani 6882m! So, forget Wikipedia.

Google Maps shows a contour of 1220m around the summit, but that's not decisive. Small and pointy summits are not captured very well by the SRTM data on which Google Maps is primarily based, and I don't know how steep it really is, so it could still be 1280m high. A bit more research, or perhaps an email to the appropriate Surinam institute, might resolve this.

Some useful references I found were Julianatop on Peakbagger, a very short trip report (in Dutch), and a longer and well written article (also in Dutch) claiming the first ascent as late as 2011! Their GPS measured 1257m on the summit. I have some doubts as to whether it this was indeed the first ascent, meaning that all others before climbed the wrong peak, but I can imagine how this could happen. The range being covered by jungle makes it difficult to see anything from the summits. These days, we are blessed with GPS, altimeters and Google maps to help us out, but before that, I imagine it would be hard to know an exact location in the jungle, and from any of the other summits it would have been very difficult to know if it was the highest or not.


The highest point of French Guyana is Bellevue de l'Inini.

PS: French Guyana is not listed as a country in SP. 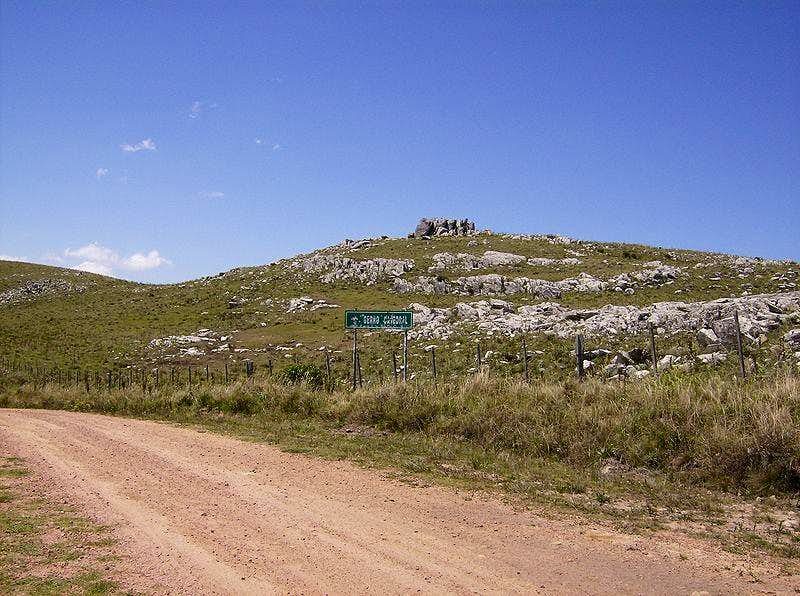 Cerro Catedral is the country highpoint of Uruguay.  The nation officially named the República Oriental del Uruguay is not known for its mountains.  In fact, Cerro Catedral is the lowest country highpoint in South America.  Uruguay is perhaps best known for itsgaucho culture, the asado, and yerba mate.  The gaucho is essentially the South American version of a cowboy.  An asado is simply a barbeque, generally involving good quality local meat and wine. Keep reading about it on the mountain page on SP.

I believe that Paraguay's Highpoint is actually Cerro Tres Kandú (842m). I have not been there, but here is a trip report about it: http://web.mit.edu/egilbert/Public/CountryHighPoints/paraguay.html

Thanks man! Already at the list. Abrazos hermano Paulo