Roraima is an interesting mountain located in the Guiana Highlands. The peak actually shares the border with Venezuela, Brazil, and Guyana, but the mountain is almost always approached from the Venezuela side. The Brazil and Guyana sides are much more difficult. The mountain's highest point is Maverick Rock which is at and on the Venezuela side (thought some other sources may differ on this).

The Guiana Highlands is a very unusual mountain range covering parts of Venezuela, Brazil, Guyana, Suriname and French Guiana. The highlands are made of ancient sedimentary rock that is over two billion years old and are some of the oldest sedimentary rocks on the planet.

The mountain is known as a Tepui, which describes a flat-topped mountain with vertical sides. Many waterfalls spill off Roraima, and the other Tepuis; nearly everyone has heard of Angel Falls, which spills off another nearby Tepui. There are many interesting plants that grow on the summit, including many carnivorous plants, i.e., ones that eat insects. There is little soil on top because the constant rains wash it away. 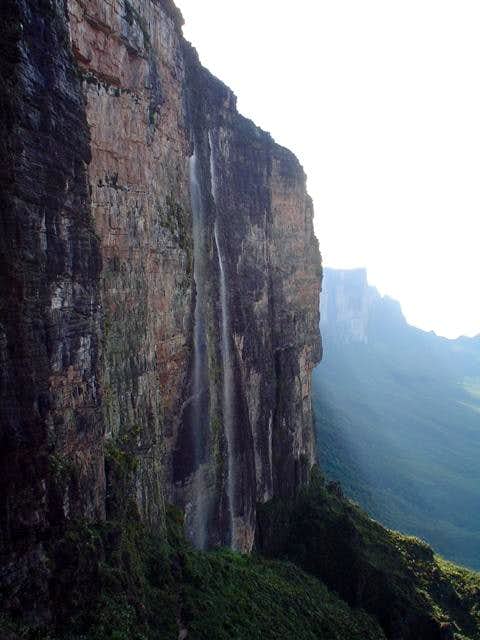 A View of Roraima's water fall, in the way to the top of the Tepui.

To reach the trailhead, you must make your way to San Francisco de Yurani. San Francisco de Yurani can be reached by bus. Most people ride the bus all the way there from Caracas, Ciudad Bolivar, or Ciudad Guyana. Others fly to Santa Elena which is only a few hours south of San Francisco de Yarani, and take the bus up from there. There are some rather grubby hotels in the town, and a few restaurants. We were allowed to camp in the futbol (that's soccer for gringos!) field. There is a small selection of food in some stores, but I would recommend bringing most items from a larger city. (Hotels have probably improved in recent years).

The actual trailhead is in Paratepui, which is 22kms (14 miles) east of SF de Yurani. Most hire a vehicle in San Francisco de Yurani, but it can be walked in a day for those who wish to save a few bucks (not recommended). A vehicle cost $100 in 1996 and can hold 6 people with gear. The cost is probably quite a bit higher higher now. 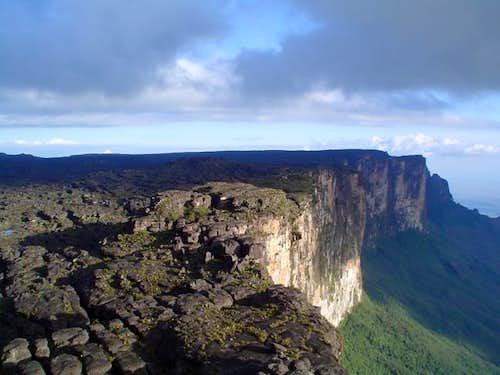 A view of the big walls of Roraima from the highest point of the Tepui.

The Paratepui Route, is by far the most popular route on the mountain is is probably use by at least 99.999% of the people climbing the peak. This is also the only non-technical route available for climbing the mountain. The route crosses the Gran Sabana and climbes a rugged and slippery route to the summit. There are several river crossings, which you must do on foot (no bridges). The Rio Tex and Rio Kukenan crossings can be problematic after rains. The trek out to the base of the peak can be hot, sunny, and shadeless across the Gran Sabana. It usually takes 1 to 1 1/2 days to reach the base of the peak. The trek to the top and back usually takes four days, plus any days you may spend on top.

Other routes other than the one described are very seldom attempted. Rock climbers could probably find several "first" all over the sides of this peak. The mountain has been climbed from the Guyana and Brazilian sides, but I don't have any information on the routes, other than they are technical big-wall climbs and only for expert climbers.

See the last section at the bottom of the page for routes that were put of on the Guyana side of Roraima. 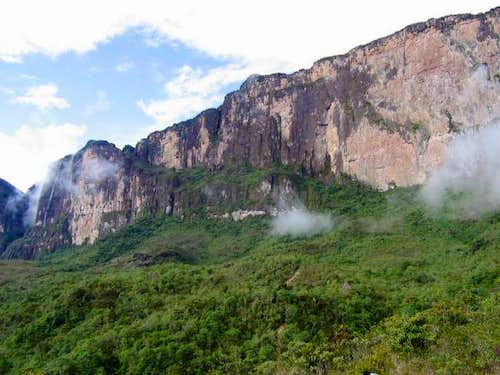 The slippery trail to the top of Monte Roraima.

Locals will probably insist that a guide is needed, but if you're just going to the top, and not exploring too much of the Tepui top, than you may get by without one. If you plan on spending time on top (recommended), than a guide will be needed for that part. If you insist on going guide-less, you probably will not be allowed to hire a vehicle to Paratepui. In 1996, a guide cost us $50 a person for the five-day trek (four people), but undoubtedly the cost is higher now.

In recent years, you also need a permit from inparques, which you can get with a touring company.

Most people take two days to summit and two days to return, making the trip four days if just reaching the summit and back. At least five days is recommended so that you can spend at least one day on the summit plateau.

The only time to safely make this trek is December through March, which is the "dry" season. The river crossings would be very dangerous in any other season. 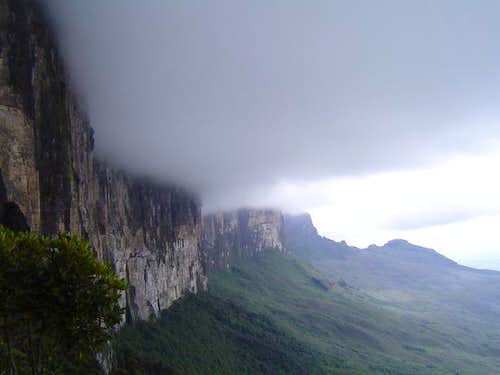 Don't expect it to be completely dry at any time of year. 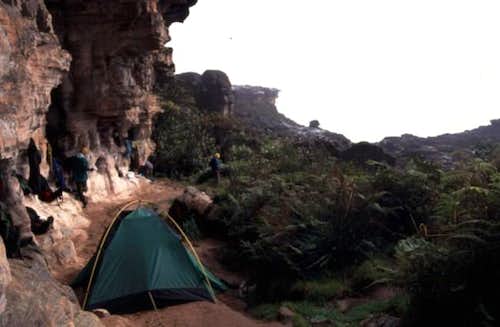 The walk to the base of the mountain can be hot and shade-less, but anyone who has spent the night on the summit, can attest that this must be one of the wettest places on earth. Take a good rain suit, and a waterproof tent. There are several river crossings as well, be prepared for that. Temperatures are usually near 10 degrees C (50F) on top, night or day, and its usually very windy and rainy. On top, clear weather is extremely rare even in the "dry" season. 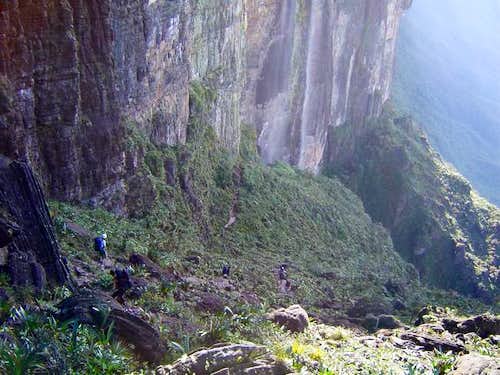 The climb goes through a waterfall and lush rainforest.

At the time of my visit, the only places where maps are currently available are the sketches in the Climbers and Hikers Guide to the Worlds Mountains (Kelsey) and the map in Lonely Planet's Venezuela.

A new route has been put up from the Guyana side of Roraima. The route was put up by Greg Child, Jared Ogden, and Mark Synnott. Below are some links: