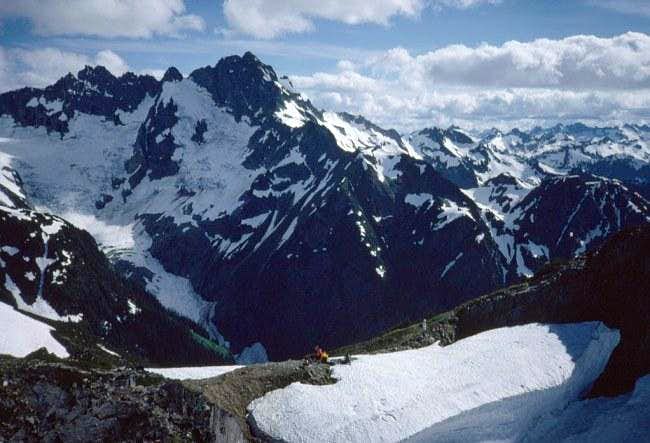 From Marblemount: Where State Route 20 (the North Cascades Highway) makes a sharp, right-angle turn, leave it and go E on the Cascade River Road (crossing the Skagit River on a big steel bridge immediately off SR 20). Follow the Cascade R. Rd. 22 miles to its end at the Cascade Pass trailhead. (Elevation 3660'. You'll find a big parking lot, restrooms, a few picnic tables, and spectacular views of Johannesburg Mountain, across the valley. Listen for avalanches over there.)

The trail to Cascade pass was designed by someone who thought humans should never be forced to walk perceptibly uphill. It stretches 1800 feet of elevation gain over 4 miles, starting with too many long, level switchbacks. But hey, you're carrying a big pack – enjoy it.

The upper section of the trail traverses broad talus slopes that may be swept by snow avalanches in early spring. Even in late spring and early summer there are one or two places where you cross steep snow runnels. An ice axe may be in order.

From Stehekin: I don't know if anyone begins the PT from Stehekin, but it can be done, and the Park Service website says that's the only place, besides Marblemount, where you can obtain your Backcountry Permit. From Chelan, take the Lady of the Lake passenger ferry up the 52-mile long lake to Stehekin. A shuttle bus usually is available to take you up the Stehekin River Road. From the road-end at Cottonwood Camp 4 miles of trail lead to Cascade Pass, but currently, the road is washed out at Bridge Creek, so the hike is about 12 miles. 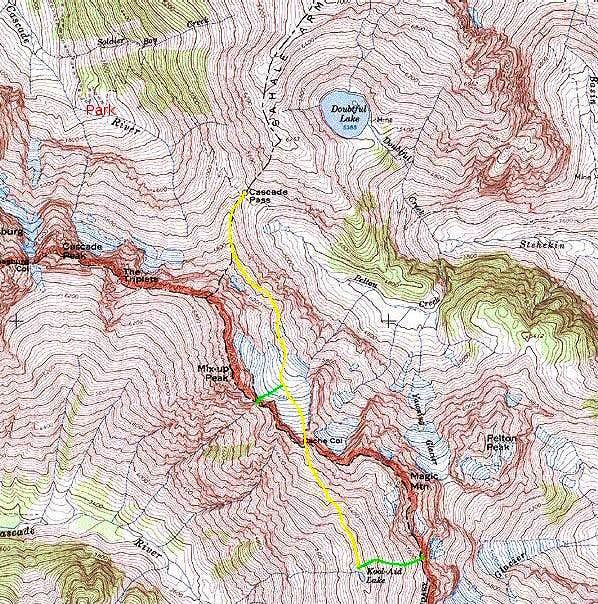 From Cascade Pass, elev. 5400', official trails radiate in three directions: W to the Cascade River (the trail you probably arrived on); E to Shehekin, and N up Sahale Arm to Sahale Peak. You're going south. Climbers and curious hikers have beat a trail up Mix-up Arm. At about 5900' it leaves the crest of the Arm, going left toward the Cache Glacier. Pay attention when crossing the steep snow gullies on the traverse. If you slide, there's precious little time to arrest before going over a 400' drop. Arrive at the N edge of the Cache Glacier, probably at about 6300'.

[My photos show us crossing the Cache Glacier unroped. In my four trips across the glacier between 1977 and 1991 the glacier was so smooth and unbroken that a rope seemed superfluous. It's shrinking now and you may find crevasses or other hazards that didn't exist 15 years ago. Use your head.]

Pass through the notch, turn right, and drop your big packs at the base of a 30-foot, class 4 gully. Don harnesses and enjoy. Return the way you came, through Gunsight Notch, and continue to Cache Col at the glacier's southern tip. 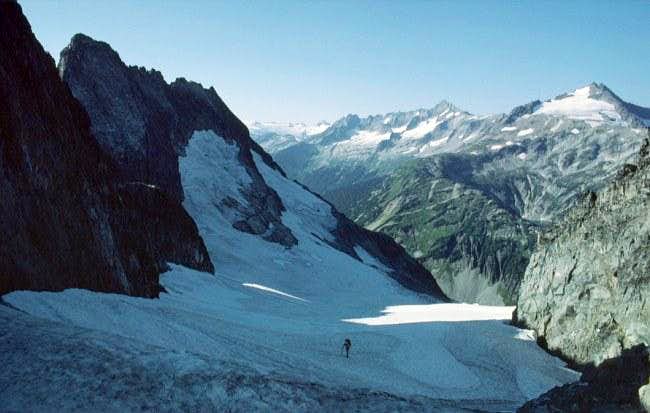 From Cache Col descend and traverse SSE on rocky and heather-covered slopes (keep the ice axe handy for slips on steep heather) about 1 mile to Kool-Aid Lake, a tiny tarn at 6320' elev. The lake water looks inviting to drink, but this little camp area is over-used. I've always gathered snow or meltwater from above the lake.

In reaching camp, you've passed under the W face of Magic Mountain. As luck would have it, the standard route up Magic is the S ridge, starting from near Kool-Aid Lake. 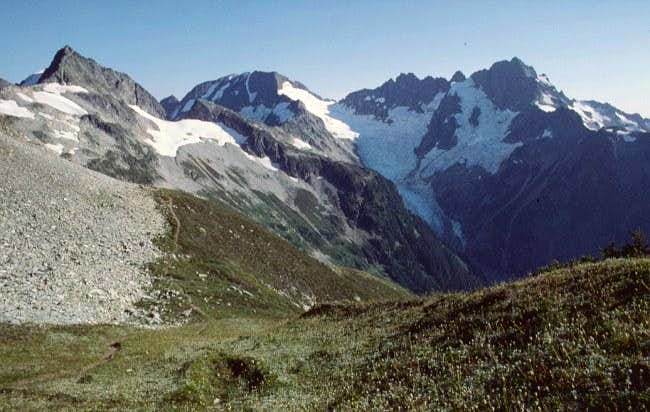 Peaks to Tempt You

There are no sensible ones, yet. If you have to go back, go the way you came. You are high in the cirque at the head of the Middle Fork of the Cascade River. There's a trail on the valley floor, but it really ends exactly where the map says it does: at a creek that drains the S side of Cascade Peak. The W side of that clearing on the map is a wide-open meadow of sedge grass. The right side of the clearing is really an impenetrable vine maple jungle. (Actually I penetrated it once, but it was exhausting with a small pack, and I was well off the ground through most of it. I hoped to pick up the trail again in the forest on the other side, but there was no trail there.)

If you were to accidentally descend the W side of Mix-up Peak, you might conceivably descend to that trail and hike it out to the Cascade River Road, but that would be a long, dangerous descent to the trail.

There is a route out of the Stehikin valley up the Yawning Glacier and S Glacier to Hurry-up Peak, near Kool-Aid Lake, but it's a convoluted route involving scrambling and technical ice. It's probably the easiest descent E from Kool-Aid Lake, but hardly qualifies as a bail-out route.

Click on the thumbnail for a Google Earth view of Stage 1, with annotations.

Actually, Stage 1 normally ends at Kool Aid Lake, so the route from there to Spider-Formidable Col is the beginning of Stage 2.