[img:697287:alignleft:small:Lincoln and Cameron] Without doubt, the Decalibron is one of Colorado's most popular hiking routes. Oft times in summer, they're be so many people on the upper plateau, you'll wonder if anyone is even left in the lower towns of Breckenridge and Fairplay.
This efficient route takes in three Fourteeners and a forth unranked Fourteener from which Decalibron takes its' name (DEmocrat, CAmeron, LIncoln and BROss).
The popularity of this route is two-fold as it takes in the aforementioned peaks in relitively quick time plus it keeps the traveler at altitude. Even from the trailhead, Kite Lake is located at a high altitude (12,000').

The entire area is comprised of large, bulky mountains with gentle, wide open summit plateau's (with a bit of an exception of Mt. Democrat). However, within the Sawatch Range, this is pretty much the norm.
One other thing of note is there is a ton of private property by way of mining claims. It's taken a while for the land owners, 14ers.org and the Colorado Fourteeners Iniative to come to an amicable agreement regarding access. There are new signs, new trailwork, and cautions informing hikers of the new access route and hidden dangers of mine shafts. The new trail is easy to follow.
Otherwise, bring wind gear while on this route. The entire area is prone to brutal winds.

From the town of Alma (17 miles south of Breckenridge or 6 miles north of Fairplay), head west on a dirt road from the center of town. There is a small and easily missed sign ststing Kite Lake.
Proceed through the initial residential neighborhoods and arrive six miles later at the trailhead for Kite Lake.
Parking is $3.00/day and an outhouse is present. 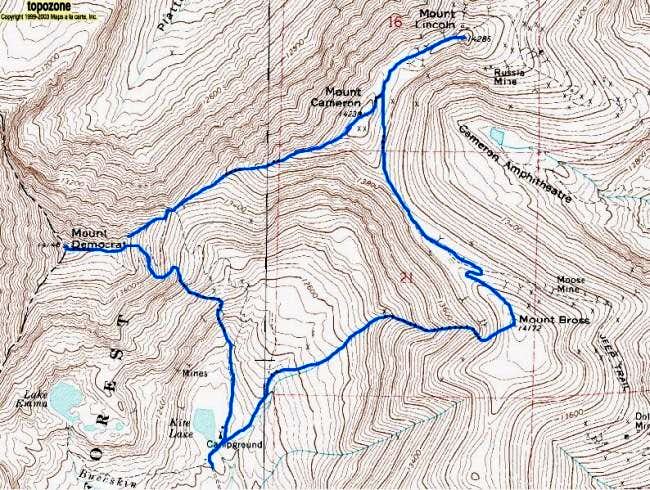 [img:697277:alignleft:small:Mt. Democrat]
The good thing about this hike is that it can be done in either direction, basically an enlongated loop. Most people however, usually start with Mt. Democrat (argueably the hardest of the trio). Whether or not 'Decalibron' takes its name from the direction of choice, I don't know; though it certainly stands to reason.
What isn't recommended is climbing straight up Mt. Cameron's South Face. It is a nightmarish scree slope (steep with mild cliffs). Plus, since you'd essentially be starting in the middle, you'd have to backtrack to some degree if all three peaks were the goal...not exactly efficient.

Start from Kite Lake and follow the well-worn path past the east side of the lake. The main trail winds back and forth past a mine ruin and over tallus eventually reaching the Democrat-Cameron saddle. Ascend 700' to the southwest picking your way over tallus as best you are able. There are several faint trails here, but sticking to the ridge crest is going to be the easiest choice. The false summit at 13,900' finally reveals the true summit about a tenth of a mile farther off. Descend back to the saddle. The cliffs that flank Cameron's south side will hamper retreat options until you get all the way over to Bross. If the weather looks threatening or if members of your party are not up for it, turn back here!

Ascend the west ridge of Cameron on good trail and enjoy the views to the north into Platte Gulch and the popular Quandary Peak. The summit of Cameron is a flat and gravelly affair marked with a [lonesome] cairn and some mining ruins. The whole 'summit' area of Mt. Cameron is on private property.
Descend to the northeast and follow the obvious path half a mile to the double-humped summit of Lincoln. This is the high-point of the route and the 8th highest summit on Colorado. Mt. Lincoln has some really nice views of Hoosier Pass and Hoosier Ridge to the east.

Return to the Lincoln-Cameron saddle and either reascend Cameron or skirt it to the east on good trail. The path, more like a Jeep road really, toward Bross is obvious and accessible to 4x4s and mountain bikes. As such, it does not present much of a challenge to foot traffic. In fact, the most challenging part may be finding the actual summit of Bross. The top of Bross makes Cameron look like an airy pinnacle! The summit itself is marked with a three-sided rock shelter. Winds on Bross can be a complete nightmare to deal with since the summit is so flat and featureless. A few minutes walk further south will yield an unranked summit, South Bross.

Descent from Bross is your last task. The main trail bears south and west from the summit. You will pass the top of a broad couloir shortly which makes a good descent route if there is still snow present (mid-June). Otherwise, continue southwest and follow the trail down the ridgeline to the south of the couloir. Hike back across half a mile of meadow to reach Kite Lake.

During the warmer months, there really isn't any extra special gear one needs apart standard alpine hiking gear. This is only a hike albeit at altitude.
But since this route lies entirely above treeline and a healthy portion of that in the alpine, don't go and NOT expect bad weather. And as said, this entire area is typically very windy. A good windbreaker would go a LONG way.

Come winter, take WARM clothes. I've attempted Bross during blizzard conditions and because of the winds, I've had to turn around because I didn't have enough layers to properly cover exposed skin. I can't count the number of times I've had to take shelter in the outhouse back at Kite Lake to relayer and organize myself so I wouldn't look like a walking 'yard sale.' Don't underestimate the winds in this area in winter.

-Mt. Bross in the background during a winter ascent

The Decalibron Peaks (Mount Democrat, Lincoln, Cameron and Bross) are all closed to public access while a coalition of groups works to address trespassing and leave no trace issues. Please respect the closure as the Colorado Mountain Club, Colorado Fourteeners Initiative, Forest Service, and State DNR work to re-secure public access to this area. For updates visit https://www.fs.usda.gov/recarea/psicc/recarea/?recid=12505