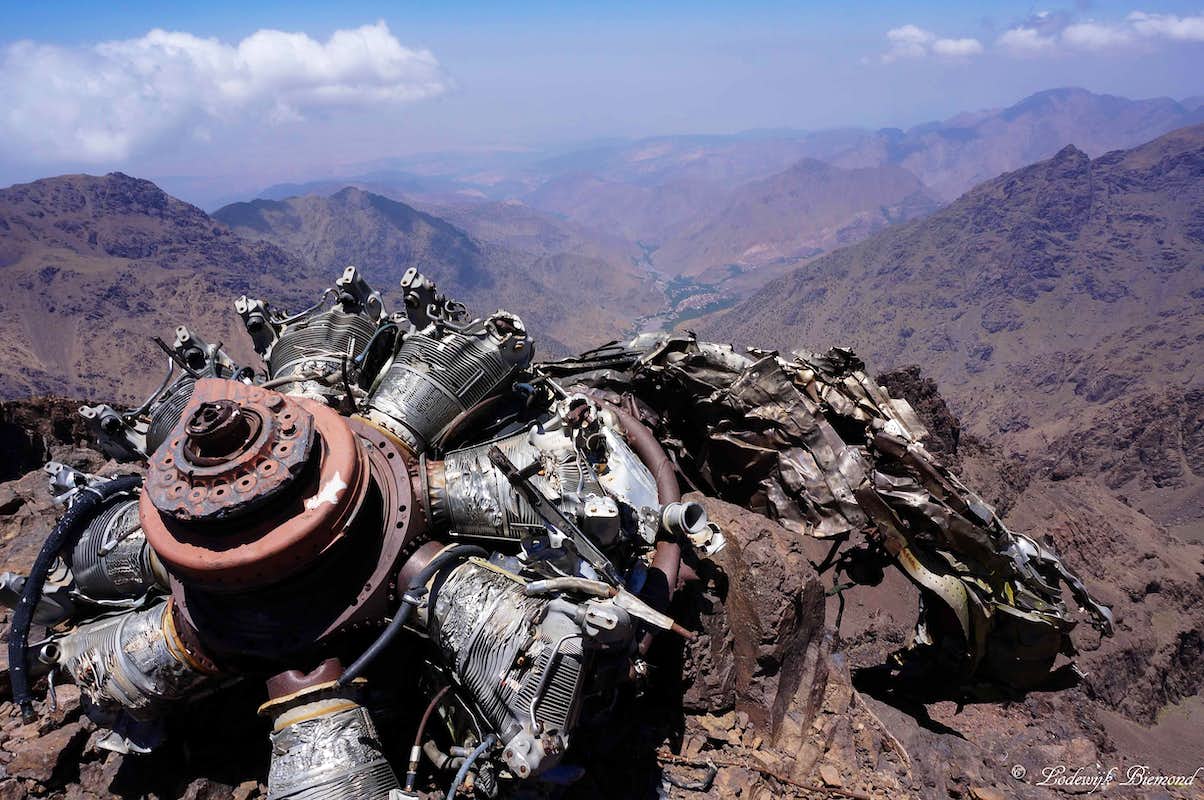 Tibherine is a mountain located in the Toubkal Massif of the Moroccan High Atlas.  Tiberhine consists of two summits: The Eastern summit measures 3880 meters (12.761ft) in altitude and the Western summit 3887 meters (12.783 feet), making it the slightly higher one. The two summits look similar and are often called ‘the twins’.  Tibherine is mostly famous because of the remains of an old airplane which are scattered along the whole West Face of the mountain. If you hike up the west Face of the mountain you will encounter the propeller of the aircraft which is put up straight to mark the trail.

Besides the propeller, many more parts are encountered when hiking up this side of the mountain. The most impressive sight of this mountain is actually located on the summit itself: The engine (or at least a part of it) of the airplane is situated exactly on the Eastern summit, a very strange sight to say the least. The airplane,  a Lockheed-749A (5N-85H) struck the mountain on November 28 - 1969, due to triple engine failure, killing all eight on board. The Constellation, which was carrying weapons to Biafra, was discovered two years later on July  18, 1970 by mountaineers climbing in the Toubkal region.  When you look down the West Face of the mountain from the summit you see all kinds of metal pieces glistening in the sunlight. After hitting the summit of Tibherine, it must have been broken in many pieces and fallen further down along the West Face. That must not have been a pretty sight if you think about it. Well, enough about the plane for now, read more about it in the section below.

Tibherine is ocasionally climbed together with Jbel Toubkal, the highest mountain in the Region and even in Northern Africa as a whole. The route branches off the North Cwm Route, which goes from the Toubkal Refuges to the summit of Toubkal. At about 3600 meters of altitude there is a separate trail leading towards both summits of Tibherine, with the eastern summit the most often one being climbed because of the airplane and because it is the closest one to the North Cwm route. The trail is not very difficult, but is covered by loose rocks and sand making it very slippery, so watch your step. The overall grading is T4.

Tibherine offers great views from the summit. Especially the views to the north, which are in my opinion, even better compared to Toubkal. You can see a big part of the route you came up (Imlil- Asni- Chamharouch) including the beautiful village of Aremd and the starting point for all ascents in the area: Imlil, which is over 2000 vertical meters below you. Towards the west you can see Biiguinnnoussene (4002m) and Afella (4043m), towards the east you can see Imouzzer (4010m) and towards the south the mighty Jbel Toubkal (4167m) looms above you.

Tibherine is a ‘’must’’ when visiting the area.  Encountering an engine of an old aircraft on the summit of a mountain being as high as, for example Grossglockner in the Alps, is just crazy. Also, climbing Tibherine is good to combine with a Toubkal ascent, but prepare for a long day when doing so! Last but not least the views are awesome as well. 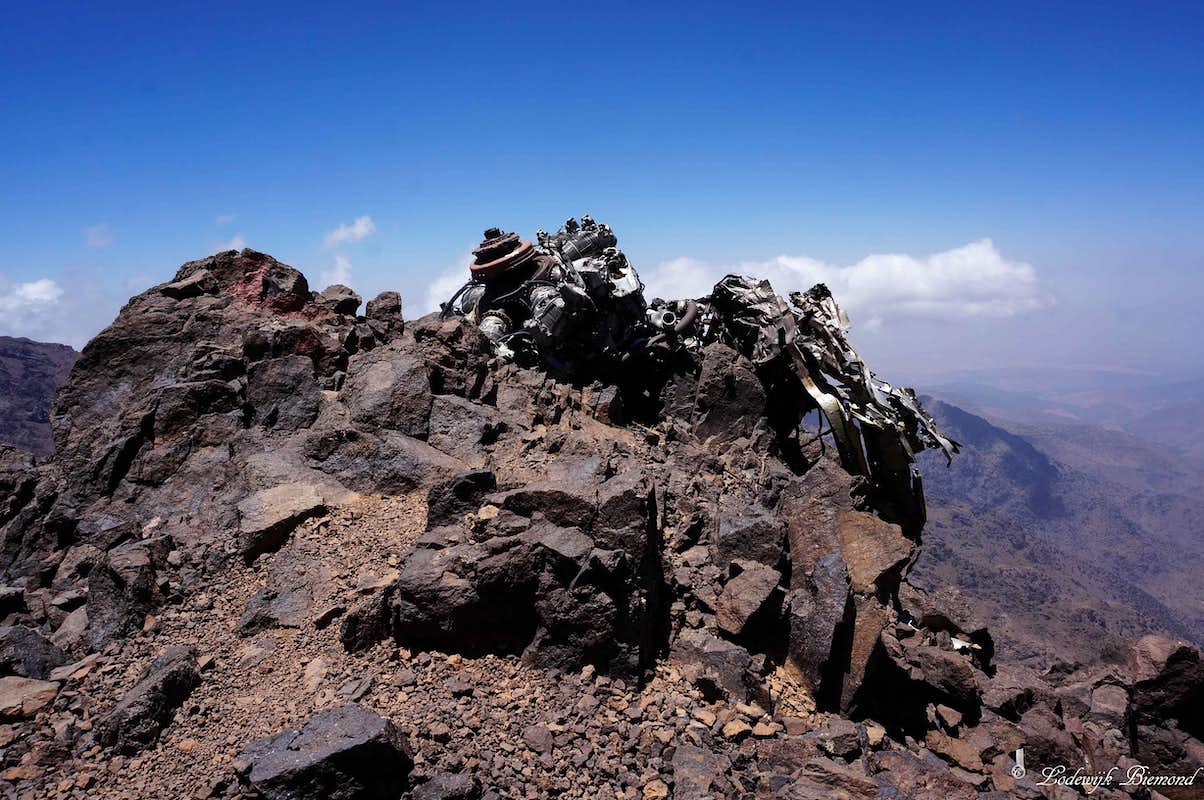 The route starts at the village of Imlil (1740m). From here it is 6-8 hours walking to the two Toubkal Refuges at an altitude of 3207 meters. The route is described on the Ikhibi Sud / Normal Route page.  After spending the night in one of the Refuges there are two options for climbing Tibherine:

If you want to climb the West summit just keep heading west until you pass the Eastern summit (at your right). When you are under the Western summit, head up to the summit.The trails are steep and covered with loose debris, making it very easy to slip, so watch out here. The upper part of this trail is graded T4 for the Eastern summit.  The upper part for the Western summit is slightly more difficult (T4+), since the trail is absent here and you have to find the easiest way up trough the loose debris. About 20 to 30 minutes after leaving the saddle of Tibherine with Imouzzer you will reach the summit of the Eastern or Western summit, depending shich one you chose to ascent. Descent is the same way back.

2)  Take the South Cwm route up to the summit of Toubkal (T3). Descent from the summit along the North Cwm Route (T3+). See the individual Route pages (North and South Cwm) for more detailed information.  After descending the north face of Toubkal the saddle that connects Tibherine with Imouzzer is reached. Climb to the summit of Imouzzer as stated at 1). After summiting descent the same way back to the saddle and follow the North Cwm route down to the Toubkal Refuges or all the way back down to Imlil. 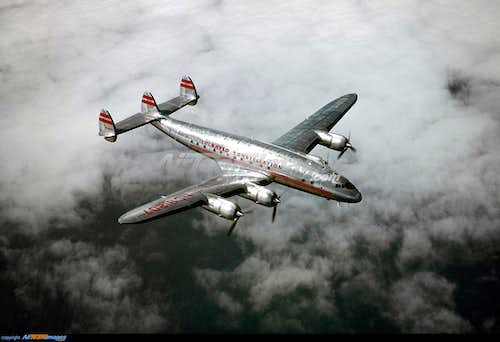 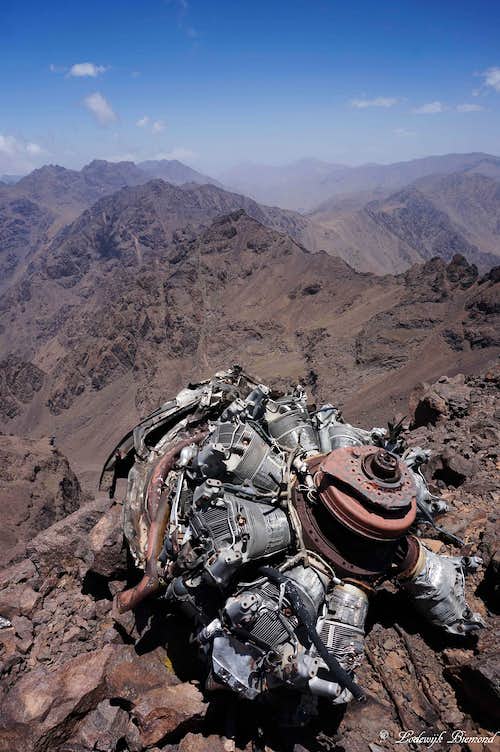 The Engine of a crashed plane on the summit of Tibherine

The crashed airplane was on its way to the Republic of Biafra. Biafra was a secessionist state in south-eastern Nigeria that existed from 30 May 1967 to 15 January 1970, taking its name from the Bight of Biafra (the Atlantic bay to its south). On November 28- 1969, the crew was performing a cargo flight from Faro to Uli with an intermediate stop in Sao Tomé with ammunition on board. While overflying Morocco by night, the crew encountered engine problems and informed ATC they want to divert to the nearest airport. The aircraft, a Lockheed 749A,  hit Mt Tibherine.

All SAR operations were suspended after a few days as no trace of the aircraft nor the crew was found.  The plane was discovered two years later on July  18, 1970 by mountaineers climbing in the Toubkal region. The debris were found on the slope of the mountain, at an altitude of 3,800 meters. All eight occupants were killed and the aircraft was totally destroyed. According to the Biafran government 3 of the 4 engines of the plane stopped working resulting in the crash.

Nowadays,  45 years after the crash, many of the remains are still present on the West face of Tibherine. Many climbers ascending Toubkal, Tibherine or Imouzzer over the North Cwm route, encounter them. Although it is a sad story, it is worthwile seeing these remains, especially the engine on top of Tibherine. 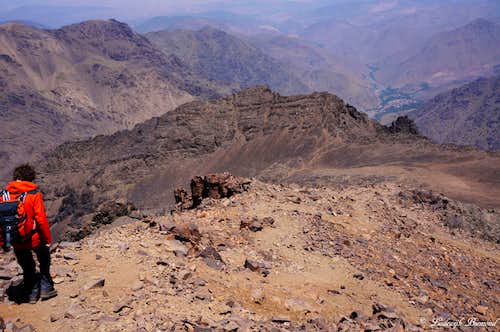 Maarten descending Toubkal with Tibherine behind 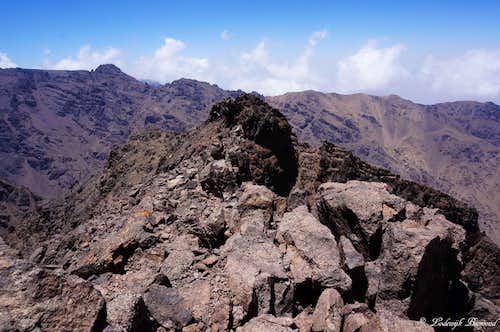 Tibherine West Summit as seen from the Eastern one

Good hiking shoes are mandatory.  There is a lot of scree along the route, I saw many people slipping. You have to be careful with your ankles so wear high shoes. Climbing gear is not needed. Furthermore, take warm clothing with you, even in summer. Temperatures can drop below zero, even when temperatures are as high as 40 degrees during the day in Imlil. Take some shorts and T-shirts as well.Finally, the sun is immensely strong on the higher parts of the mountain. Take something to cover your head with, to protect yourself from the sun. I didn’t use gloves , a shawl etc.

In spring and winter the biggest part of the mountain is covered with snow. Along with the warm clothing climbing gear can be useful. Especially crampons and an ice axe. Check the conditions of the mountain if you are planning a trip and take the appropriate gear and clothing.

Last but not least. You have to spend the night at one of The Refuges (or camp in front of them), so take a sleeping bag with you along with some cash money to pay for the hut. The hut sells all kinds of food and drinks. 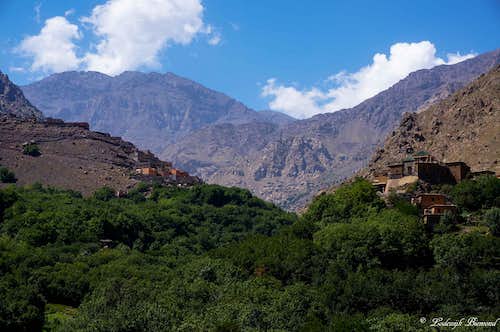 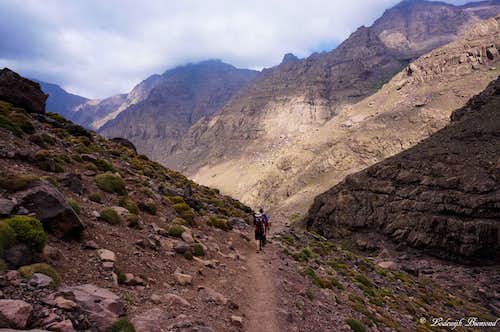 Tibherine can be climbed all year long.  During the winter months including autumn and spring there is snow present on large parts of the mountain. In spring snow retreats  to about 3000m. In winter the whole route is covered by snow.  Generally most people climb Tibherine in the Spring season (end of march- until may). During the summer months temperatures can get high, even in the higher altitudes. I climbed Tibherine in July, but it worked out fine. I was afraid it would be too hot, but it wasn’t... In the summer months there is no snow left on the mountain and temperatures are just above freezing point at night (at 3200m) and during the day at the summit temperatures were as high as +15 degrees C.  On the lower parts of the mountain (above Imlil) temperatures are usually above 25 degrees C. 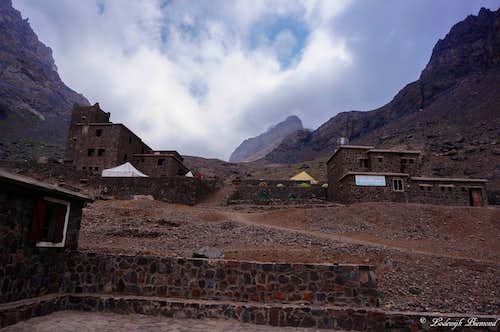 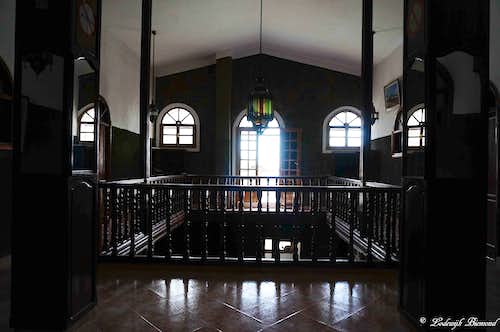 Inside Toubkal Refuge Les Mouflons
There are many Hotels in Imlil and Aroumd (a village above Imlil at 1940m). These hotels are called Riad’s and offer great value for money. Spending the night here is rather cheap. We paid 15 euro’s per person for a night including (a very good) breakfast. The place we stayed was Riad Atlas Toubkal, but there are many more in the area. Follow this link for accommodation in Imlil.

Climbing Tibherine requires spending the night at the Toubkal Refuges at 3207 meters of altitude. You can choose from the Refuge du Mouflons or the French Alpine association’s Refuge Nelter.  It is also possible to camp in front of the huts on a large terrain. Costs are of course lower, but I can imagine it being cold at night at 3207m. Below are the official websites for both Refuges. You can make reservations via the internet site. You have to pay upon arrival. We stayed at Refuge des Mouflons. We paid about 25 euros for a night including dinner and breakfast. Dinner is very recommended! 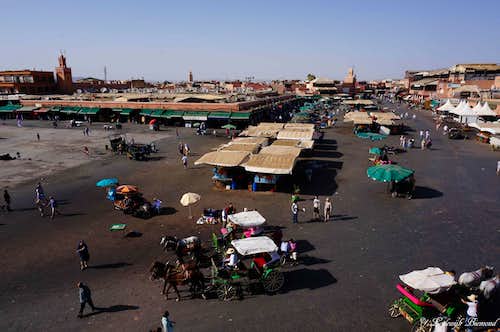 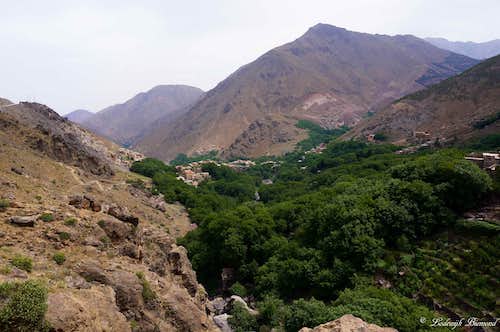 View from the Trail back to Imlil
The city closest to the Central High Atlas is Marrakech. Most people visiting the region fly to Marrakech and travel further from this fascinating city.

The starting point for the ascent of Tibherine, Toubkal and the other surrounding mountains is the village of Imlil (1740m). In past days it was hard to get there, but some years ago a good paved road (up to western Standards) was opened. Nowadays it will take you about an hour and a half by car to get to Imlil from Marrakech. Take a grand Taxi from Marrakech to Asni. In Asni take a Taxi to Imlil. You have to switch Taxi’s there, since the normal Taxi’s do not go further.  Easier is to just arrange a Taxi with the Hotel you are staying in. I can recommend Riad Atlas Toubkal in Imlil. The hotel arranged a pick-up at the airport and directly drove us to the Riad in Imlil.

Of course you can also rent you own car and drive there yourself. Although the roads are good, I didn’t see too many people using a rental car to get to Imlil. Furthermore, traffic is much more chaotic compared to Western Europe.

How to get there: Google Map 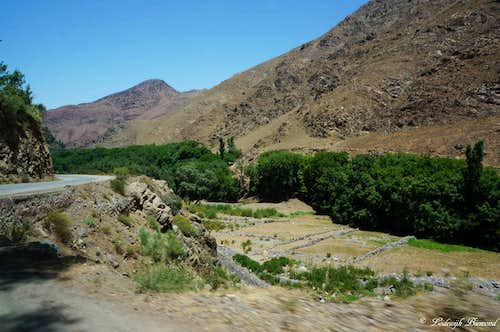 Paved Road between Asni and Imlil 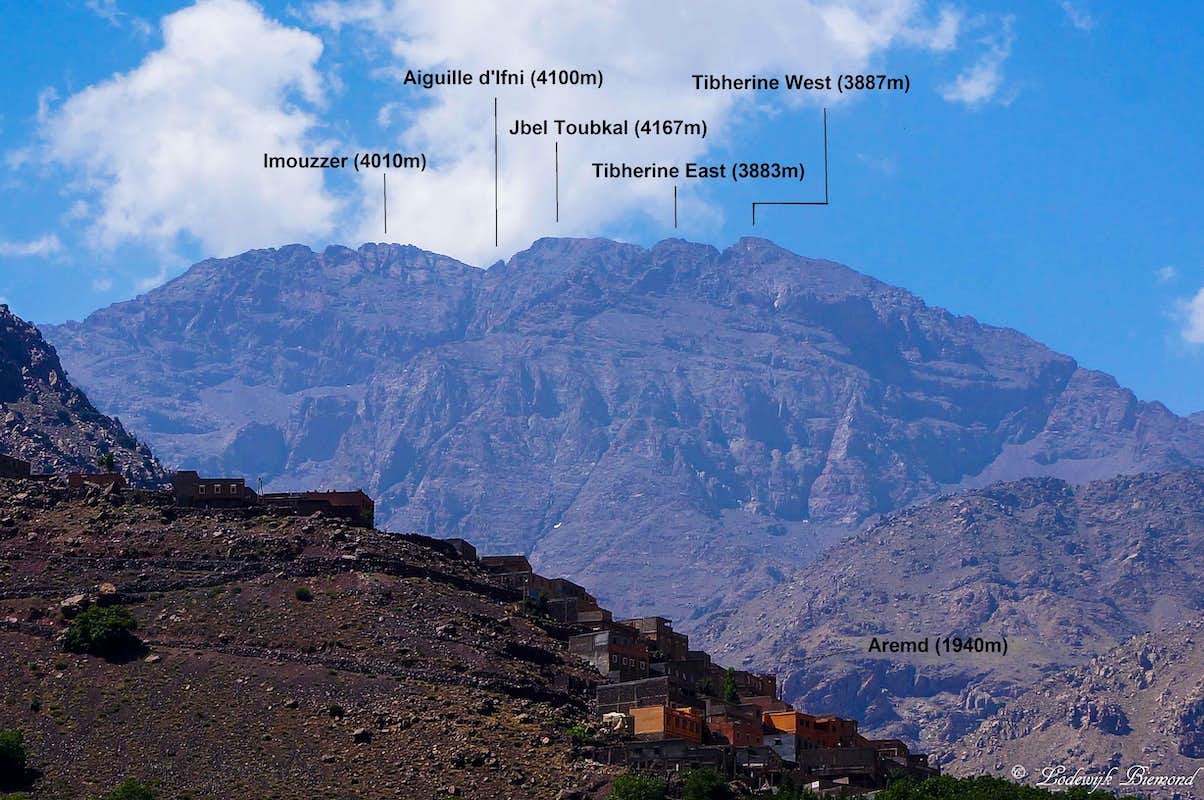 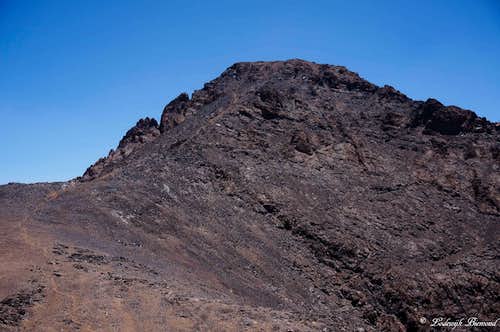