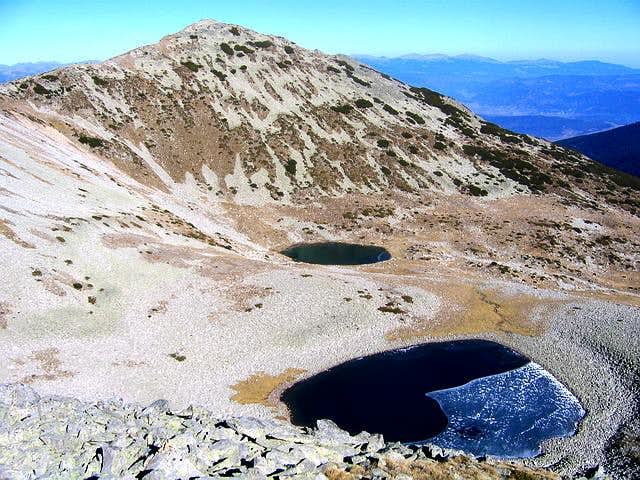 Todorka is also very famous and well known by those who like skiing. On slopes of Todorka (2746 m) massif is also located the ski infrastructure of Bansko ski resort. Ski runs goes till 2500 m.

For those who want to enjoy in incredible panoramas of highest peaks of Pirin massif and for those who like mountain photography, Todorka climbing route is pure paradise! 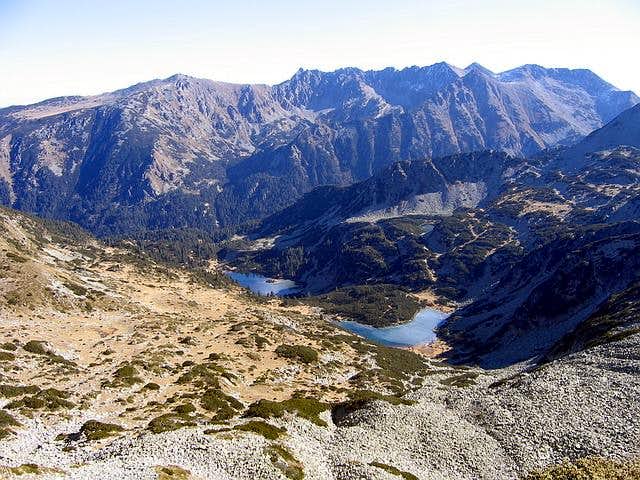 The beauty of Pirin from Todorina Porta (2702 m) summit

Todorka (2746 m) summit is one of the best viewpoints in whole massif of Pirin, which offer enjoyment in many different panoramas.

View from the summit of all three peaks of Todorka (2746 m) massif is very attractive. You can see all highest peaks of Pirin massif, specially Vihren (2914 m) and Kutelo (2908 m) which staying on W side oposite to Todorka massif, but also all others impressive peaks on E and SE part of Pirin massif (Polezan 2851 m, Kamenica 2822 m, Malek Polezan 2821 m,...). You can also enjoy in view to beautitufully lakes, specially Todorini Oci, Ribno Ezero I, Ribno Ezero II, Gorno Ezero, Banderishki Ezera, Strizicki Ezera and Vlahinski Ezera. Also, Rila massif is nicely visible in the distance. All summit views are nice and special, but more impressive are W view to Vihren and Kutelo. Also, very attractive is E view to Polezan, Kamenica and Malek Polezan, and to all others highest peaks of Pirin massif. 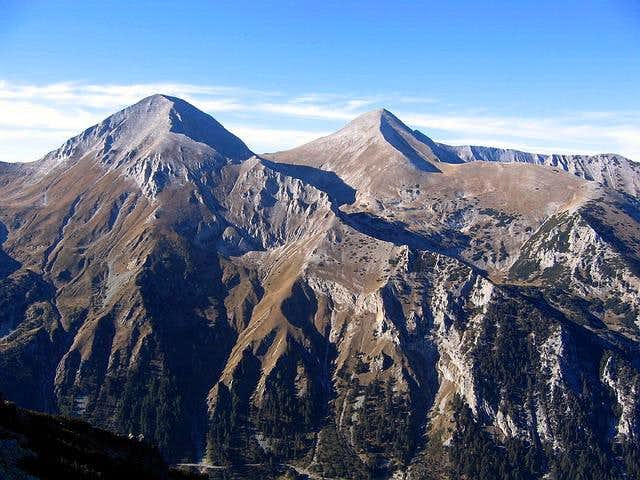 Climbing the summit of Todorka and it's two highest peaks Todorin Vrh (2746 m) and Malka Todorka (2712 m) is an extraordinary adventure. Mountaineers mostly using southern approach to Todorka summit. So, that's the classical approach. Todorka route is really route for totally enjoyment in all the beauty of Pirin National Park. If you want to see some of the most beautiful lakes in Pirin massif, climbing the beautiful ridge of Todorka massif and take the best photos of Vihren (2914 m) and Kutelo (2908 m), Todorka climbing route is right thing for you.

This beautiful route starting from Vihren Hut (1950 m), belowe eastern slopes of Vihren (2914 m) massif. Path continue in direction to Hvoinato Ezero. During this part of path you can enjoy in beautifully meadows and sounds and outlook of small mountain rivers. Beautiful! After approximately 45 minutes you will be near Hvoinato Ezero, where you can take a break for some minutes. Nice place for breakfest or refreshment, short rest. After that path continue to beautiful glacial lake of Pirin - Ribno Ezero (Fish Lake) which is the right invitation for short swimming (during summer). After leaving of Ribno Ezero, very soon you will meat another group of lakes - Banderishki Ezera (lakes). 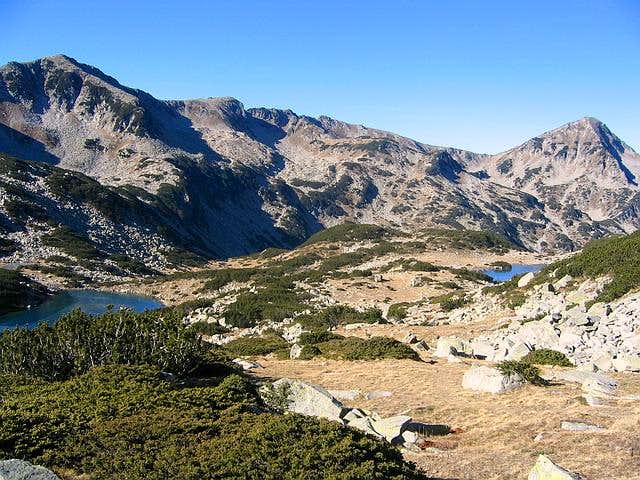 After visiting of these lakes, path go up, in right-left-right-left... direction. Whole time during this ascent you'll have better and better view to Ribno Ezero and Banderishki Ezeri (lakes). Paradise for photographers! After more 30 min of hiking you reach grassy/rocky plateau belowe the Todorina Porta ridge. From here ascent continue by hiking/climbing on large granit rocks and after 20 minutes you will reach the summit of Todorina Porta (2702 m). During this ascent on ridge you can enjoy in beautifully Ribno Ezero II and Gorno Ezero and in many peaks which surrounded them. Now, you staying on the summit ridge of Todorka massif and from here starting climbing of two next summits of Todorka - Malka Todorka and Todorin Vrh. You continue your path in that direction (N direction), walking and climbing on rocky ridge. On many places you must use your hands and walk carefully. Path on the ridge goes up and down, up and down. About 20 min you will spend to reach another summit of Todorka massif - Malka Todorka (2712 m). From here you need more 20 min to reach the highest peak of Todorka massif - Todorin Vrh (2746 m).

During whole path on Todorka ridge, from Todorina Porta (2700 m) to Malka Todorka (2712 m), and finally also to Todorin Vrh (2746 m), you can enjoy in amazing view to Vihren (2914 m) and Kutelo (2908 m)on W (on left), and all others highest peaks of Pirin massif on E (on right) and SE. From Todorka ridge you will also see some beautiful lakes of Pirin (Ribno Ezero I and II, Banderishko Ezero, Gorno Ezero and Todorini Oci. Also, 800 m deep valley between Todorka massif and Vihren massif will be whole time of ridge route belowe you. 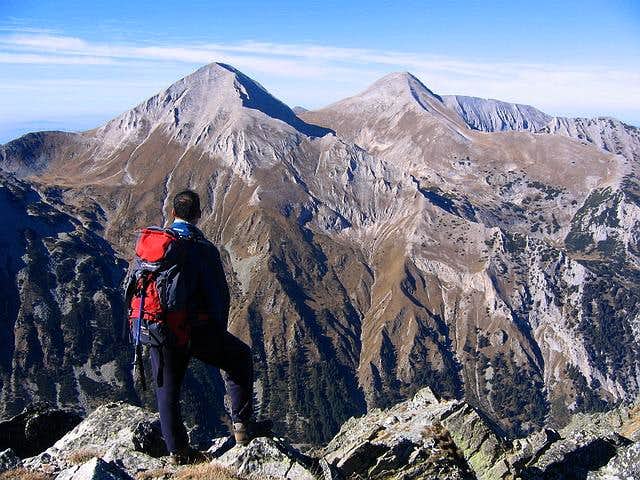 From summit of Todorka (2746 m) massif you can descend on it's southern ridge or on it's northern side. You can combine one direction for ascent and another one for descend. But, the most beautiful ascent is on southern ridge of Todorka (classical approach), from Vihren Hut (1950 m).

Also, if you want to save your energie for reaching the summit of highest peaks of Pirin massif, you can also easily reach the Todorka summit by ski chair lift, but sometimes this ski chair lift is not active. During winter, working for sure. 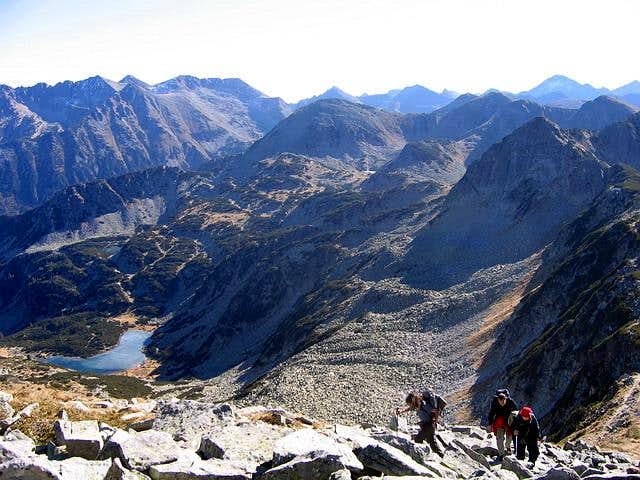 Ascent on the southern ridge of Todorka (2746 m) massif

Three peaks of Todorka (2746 m) massif - Todorin Vrh (2746 m), Malka Todorka (2712 m), Todorina Porta (2702 m) and all other peaks of Pirin massif you can climb during whole year, but of course, the optimal period is from mid June - mid September, out of the season of snow on the mountain.

Inside of Pirin National Park can stay in private appartments and rooms in Bansko town, which is 18 km far from the Vihren Hut, or you can stay directlly in Vihren Hut, belowe eastern side of Vihren massif. Vihren Hut (1950 m) is optimal place for Todorka (2746 m) climbing routes.