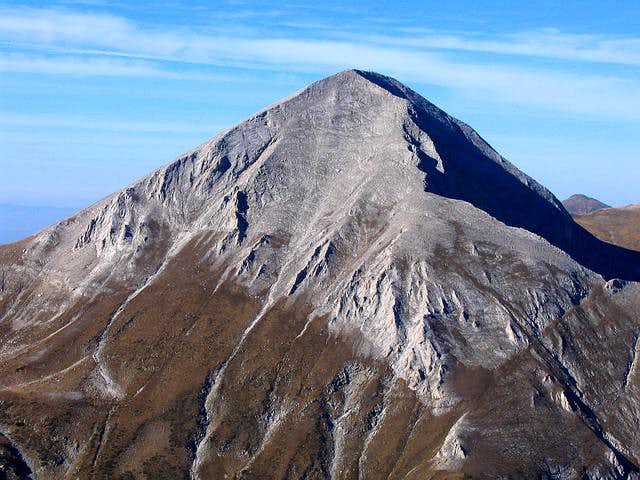 Vihren peak is situated in NW part of Pirin massif. Together with “brother” Kutelo (2908 m) (2nd highest peak of Pirin and 5th of Balkan) Vihren create an unforgettable mountain scenery of Mt Pirin. All sides of Vihren massif are beautiful. South face looks to wonderfully Vlahinski Ezera (lakes), east face dominate above 1000 m deep valley where is Vihren Hut, west face is placed above saddle between Vihren and Kutelo, but most impressive and powerful is North Face of Vihren with it’s breathtaking high wall. 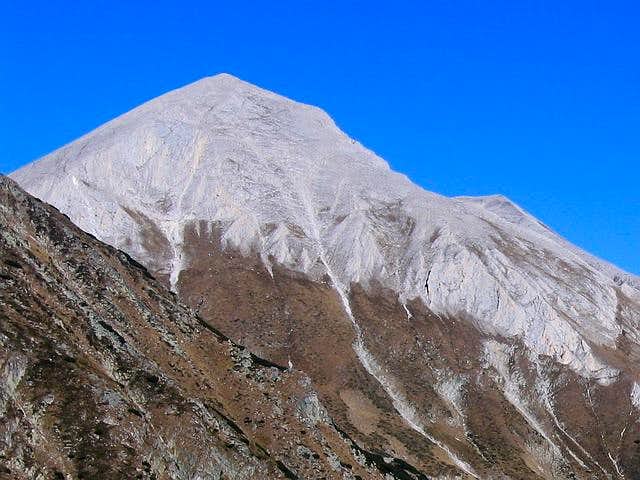 View from Vihren (2914 m) summit is very impressive. You can see all highest peaks of Pirin massif and few beautitufully lakes. Also, Rila massif is nicely visible. All summit view are nice and special, but more impressive are W and E view. 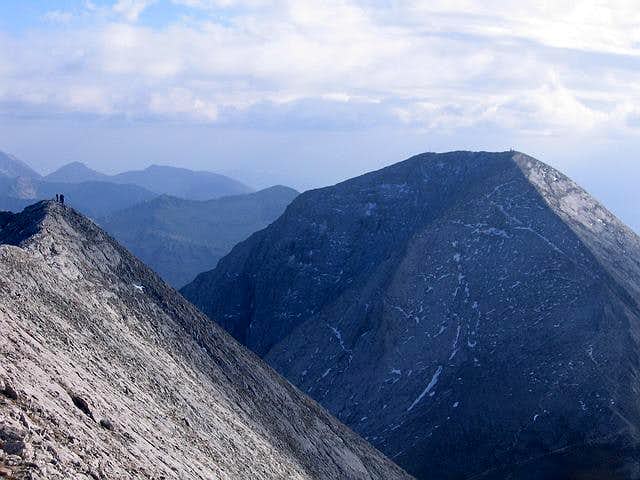 Start from Vihren Hut (1950m) and follow the red markers.

Main route start from Vihren Hut (1950 m), below eastern side of Vihren massif where is also a water spring. During whole route you go on open space, without any forest. This main and classical route is very nice. After 30 min you meat lower rocky part of Vihren massif and after that also a south side of Vihren and beautifully Vlahinjski Ezera (Lakes) below. Than, you reach Vihrenski Preslap plateau. After more1 hour of hiking you reach the pass, from where start final ascent to Vihren summit. The path to the summit is not dangerous, without any special exposed place.

Second solution to reach Vihren summit is from right side of it’s eastern side. During this route you can see impressive N and also W side of Vihren. Going on different path then in first described route, you meat saddle which separate Vihren from Kutelo (2908 m) peak, approximately on 2600 m, more than 300 m belowe the summit, from where start final ascent on W side to Vihren summit. This ascent is little beat more dangerous and exposed on some places, specially in late autumn, winter and early spring, where snow and ice are still on the rocky mountain path. From the saddle the trail continues to the left and in 40 min reaches the summit. During this part of the hike you'll have to scramble over rocks using your hands. There aren't any technical problems but the rocks may be quite slippery if it is raining. Be careful!

If you stay in Koncheto Shelter (shelter on high Koncheto ridge, 2850 m), you can climb Vihren peak via Koncheto ridge and Kutelo (2908 m) summit descent. This route is very attractive and most impressive because you can see incredible deepness of Pirin massif and it’s amazing peaks. Route start from Koncheto shelter, continue on Koncheto ridge till Kutelo (2908 m) summit, from where start descent to Vihren/Kutelo saddle on approximately 2600 m. From this pass you can reach the Vihren summit by climbing on it’s western side, which is little beat dangerous and exposed on some places, specially when is still snow and ice on the rocky path. Be careful!

From first two routes you can combine first route for ascent and second route for descent, climbing the Vihren summit from it's eastern and after that form southern side, and descending to Vihren/Kutelo saddle, and after that going back to Vihren Hut from western and northern side of Vihren large massif. This is circle climbing route of Vihren peak.

If you coming from western side of massif (Koncheto Shelter), you can easy reach Kutelo (2908 m) summit which is connected with Koncheto ridge and after that descend to Vihren/Kutelo saddle. After that, you can climb Vihren (2914 m) on it's western side and descend on it's southeastern side.

Once you've climbed mount Vihren, on your way to Bansko it is a good idea to take time to see "Baikushevata Mura" - an ancient Macedonian pine which is 1300 years old. Follow the tar road (not the path) to Bunderitza hut. In about 20 min. you'll see it on your left. There's a sign pointing at it and a path from the road leading to it.

Bansko is a small Bulgarian town located in Southwestern Bulgaria, in the district of Blagoevgrad, located at the foot of the Pirin mountain at an altitude of 936 m above sea level, with approximately 10.000 citizens. The town is situated at the crossroads of important routes from Central Bulgaria to Greece. The distance from Sofia to Bansko is 160 km. From the foot of Vihren (2914 m) Bansko is 18 km far.

Situated in the foothills of one of the country's most beautiful mountains, Bansko is a charming and historic town with the stunning alpine backdrop formed by the Pirin Mountains. A climatic mountain resort, Bansko is known as an alpine skiing, hiking&climbing centre, but it combines its natural beauty and outdoor opportunities with the atmosphere of an ancient Bulgarian town from the 10th century, and boasts a wealth of culture and history, as well as traditional taverna-style cuisine and colourful folklore. The traditional stone and wooden buildings are an integral part of its charm and character and many relics and monuments survive from its past. The alpine character of the Pirin Mountains create excellent skiing conditions for all types of skiers and experts can enjoy some of the country's best downhill skiing at the nearby resort of Shiligarnika.

Surrounded by Pirin, Rila and Rhodopa mountains, Bansko is a climatic mountain resort with a short summer and long winter. The average temperature during january, the coldest month, is -1.9C. Snow falls are abudant, providing a constant winter snow cover up to 2 m thick. The skiing season along the Pirin slopes starts in the middle of December and ends in mid-April.

The skiing conditions in Bansko are excellent. The Pirin mountain has a predonantly Alpine charachter with three peaks towering above 2900 m. However the slopes offer runs and tracks for all types of skiers, from novice to the experts, while the ski runs are maintained in excellent condition. The town itself attracts visitors by its 120 cultural monuments, its museums houses, and the permanent ethnographic and Bansko schlool of icon painting exhibitions.

The lifts and pistes in Bansko take care of your maximum comfort with their 8-man Gondola cable car by Doppelmayer, five 4 seat lifts of the latest Dopplemayer models, one 3- seat lift by Poma, 7 drags and 10 baby drags. The easy access to al lifts is secured by chip cards from SkiData.

A new 8- seat lift- gondola “Dopelmaier” started working last season. It is over 6 kilometers long and connects the town with Banderishka meadow. When one gets on it, he feels the incredible feeling that he is flowing over the snow slopes of Pirin towards the heart of the mountain. You can leave your car on the parking on the start station of the lift. The resort posses 26 kilometers ski- lifts with personnel, that help the skiers. The card for all the equipment is without contact, it is placed on the left side of the jacket, and when the skier passes, he do not have to take it out. Two new four seat lifts- from Banderishki to Kolarski road and from Zelezniq Bridge to Platoto. Drag- lift that is serving the right part of “Alberto Tomba” slope for beginners, which open Alberto Tomba (former Worlks Ski Champion) personally.

Vihren (2914 m) peak and other peaks of Pirin massif you can climb during whole year, but of course, the optimal period is from mid June - mid September, out of the season of snow on the mountain.

You can stay in private appartments and rooms in Bansko town, which is 18 km far from the Vihren Hut (1950 m), or you can stay directlly in Vihren Hut, belowe eastern side of Vihren massif. Vihren Hut is optimal place for Vihren (2914 m) climbing routes.

Inside of Pirin massif exist few huts and shelters:

Nikolai, i just now working on my new Popadija page. When i will finish, i will add your section to Vihren page. Thanks for your effort and contribution!
Greetings,
Vlado

Thanks, Nikolai!
These days i was busy, writing the new pages of Bjelasica, Sinjajevina, Moracke Planine...
Soon i will add your North Face section on Vihen page and that Banderica information about camping.
Pozdrav,
Vlado

Here is the text, and there are already enough pictures uploaded, you just have to move them into that section. I might add some more information in the future.
------------------------
The North face of mount Vihren is one of the most important climbing sites in Bulgaria. It starts from the dry glacial cirque Golemija Kazan and towers more than 400 metres above it. It is built of marble and limestone.

The left section of the face is called The Triangle and the right one - The Funnel.

Rockfalls are common, especially during the spring, the rainy summer days and the autumn. During the winter season it gets covered with snow and on some places with ice, making it a good site for mixed climbing.

The face was climbed for the first time by two German climbers - F. Auer and B. Moser, by the easiest part of The Funnel. An year later the same route was repeated by L. Telcharov and B. Stoichkov in about two hours. The Triangle was first climbed on 21.09.1947 by Andrej Todorov and Penka Mihova. On 15.02.1949 Alexander Belkovski and Vladimir Lobodin made the first winter ascent of the face (and the first winter alpine ascent in Bulgaria).

Nikolai, i just now working on my new Popadija page. When i will finish, i will add your section to Vihren page. Thanks for your effort and contribution!
Greetings,
Vlado

I think you should mention the abandoned "Banderica" camping, it's the big and unfortunately a bit dirty meadow close to Banderica and Vihren huts. It has enough place for about 60 tents and camping is allowed there. There is a small cafe that also offers food right next to the meadow. There is a big parking place too, and it's free.

Thanks, Nikolai!
These days i was busy, writing the new pages of Bjelasica, Sinjajevina, Moracke Planine...
Soon i will add your North Face section on Vihen page and that Banderica information about camping.
Pozdrav,
Vlado