Mt. Langley from Trail Peak
A few miles south of the granite giants at the end of the eastern High Sierra is the Kern Plateau. This is a land of high sandy meadows and forested walk-up peaks. The area is less dramatic than the peaks and canyons to the north but has its own beauty and solitude. Trail Peak is the 3rd highest peak on the Kern Plateau (Olancha Peak the highest) and has commanding views across the Golden Trout Wilderness and as far south as Owens Peak. To the west the southern part of the Great Western Divide peaks grace the horizon. To the northwest loom the Kaweah Peaks. To the north Cirque Peak and Mt. Langley round out the southern end of the eastern High Sierra and to the east over Owens Valley, the Inyo Mtns. and desert ranges stretch back to Death Valley. 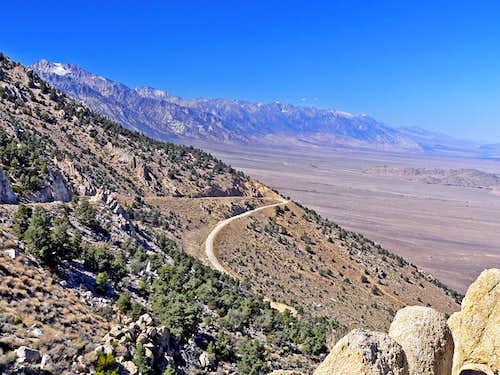 Horseshoe Meadows Road view north
From Hwy. 395 in Lone Pine go west on the Whitney Portal Road. At 3 miles turn left on the Horseshoe Meadows Road. Go south along the foot of the range then up the switchbacks to Horseshoe Meadows parking lot at 23 miles from Lone Pine. From the lot go south across Horeshoe Meadows on the Mulkey Pass Trail 0.7 miles and fork right on the Trail Pass trail. Go southwest 1 mile up to forested Trail Pass. Take the east slope (class 2 scramble) until the trees give way to an open summit in 0.8 miles.
The south side appears to offer some class 3 routes from Mulkey meadows.

Pan of the Great Western Divide from Trail Peak
Trail Peak is an easy day hike requiring no permits.

The Horseshoe Meadows Road climbs 5,000' up the eastern scarp of the Sierra and offers sweeping views of many miles of the Eastern Sierra, Owens Valley and the Inyo Mtns.. This incredible road is worth the drive itself.

"The peak was probably named by the USGS during the 1905 survey for the Olancha 30' map: it is on the first addition, 1907, and was not mentioned by any travelers before that time. The pass was on the route of the old Hockett trail, built in 1852-64. It was first named on the 15 minute quad. (INF)" "Place names of the Sierra Nevada", Peter Browning