The Trona Pinnacles are some of the most unique geological features in the Mojave Desert. The unusual landscape consists of more than 500 tufa spires, some as high as 140 feet, rising from the bed of the Searles Dry Lake basin and spread over 14 square miles. The pinnacles vary in size and shape from short and squat to tall and thin, and are composed primarily of calcium carbonate (tufa) similar to the tufa towers at Mono Lake. The Trona Pinnacles have been featured in many commercials and films (remember Planet of the Apes?)

The Trona Pinnacles were designated by the Department of the Interior as a National Natural Landmark in 1968 to protect one of the nation's best examples of tufa formation. The area is managed by the Bureau of Land Management to protect its scenic values.

It is a blast to explore this area and you can scramble and climb up many of the pinnacles as there are many hand and toe holds, but be very cautious, as the tufa is very sharp-edged and can also be crumbly. Some info about climbing the Pinnacles can be found on this website:

From Ridgecrest, travel about 20 miles east on State Highway 178 to the signed dirt road (RM 143) heading south to the Trona Pinnacles. Take this road and head southwest for about 1/2 mile and bear right at the fork in the road. Continue south for about 6 miles.

The site is open year-round; the best times to visit are fall, winter and early spring. Summertime temperatures can be as high as 115 degrees! The dirt access road is usually accessible by two-wheel drive vehicles. Following a rain, however, the road may be impassable to all vehicles, including by four-wheel-drive vehicles.

No permits or passes are needed to hike. Please practice Leave No Trace ethics.

Satellite image of the Pinnacles 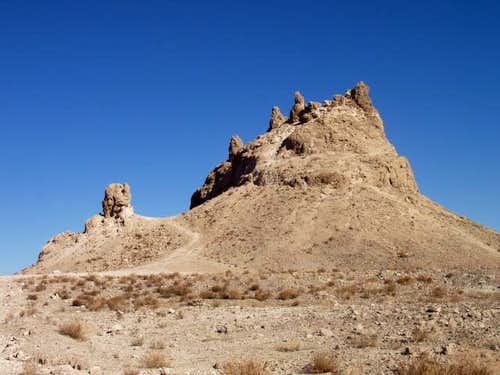 This one reminds me of Jabba the Hut!

Primitive camping is permitted at Trona Pinnacles and campers are encouraged to use existing campsites and fire rings and to pack out all trash. If you plan on having a campfire, bring your own firewood. Camping is limited to 14 days.

The only development of any facilities is a vault type toilet. There are no other services at the Pinnacles.

How were the Pinnacles formed?

During the Pleistocene Ice Ages, massive runoff spilled from the Sierra Nevada into a chain of "inland seas." The system of interconnected lakes stretched from Mono Lake to Death Valley and including Searles Lake.

Known as tufa pinnacles, these strange shapes formed underwater 10,000 to 100,000 years ago. The pinnacles did not all form at the same time. The pinnacles are divided by age and elevation into three groups. The groups are dubbed the northern, middle, and southern groups because they formed during three ice ages.

The northern group is the youngest at 10,999 to 25,000 years old. These are the best examples of what are known as tufa towers. The northern youngsters also include shapes called tombstones, ridges and cones. Close cousins to the northern group, the small middle group claims only 100 spires, but boasts the tallest "tower", rising 140 feet. The granddaddy of them all, the southern group, includes 200 tufa formations aged 32,000 to 100,000 years old.

People have historically given names to the strange forms. These ancient spires were once dubbed "Cathedral City". Geologically, the pinnacles are classified into four general shapes. Towers are taller than they are wide and rise 30 to 40 feet. Tombstones are stubby and squat and rise 20 to 30 feet. Most tombstones are in the northern-most tufa formations. Ridges are massive toothy tufa ruins. Trona has three ridges, one in the northern tufa cluster and two in the middle group. One ridge is 800 feet long and 500 feet wide and 140 feet tall. Cones are less than 10 feet tall. Dumpy and mounded, cone shapes lay scattered throughout the Trona Pinnacles.