The Upper Exum Ridge is a North American classic. It is probably the most popular and most often climbed route on the Grand Teton. In good weather, the moderate rock climbing is very pleasant and once around Wall Street mostly in the sun. Parties should not expect to have this route to themselves. An early guidebook by Ortenburger states: "There are so many variations available on this ridge that it is possible to make two or three ascents and scarcely touch the same rock twice." Thus, depending on conditions and the strength / self-confidence of the party combined with their desires the difficulty of the ascent can be varied considerably. Some stronger parties may be able to safely climb a significant portion of the ridge with a minimum of belaying while others may choose to belay the entire route. The first ascent of the Upper Exum Ridge was made on 15 July 1931 by Glenn Exum solo. 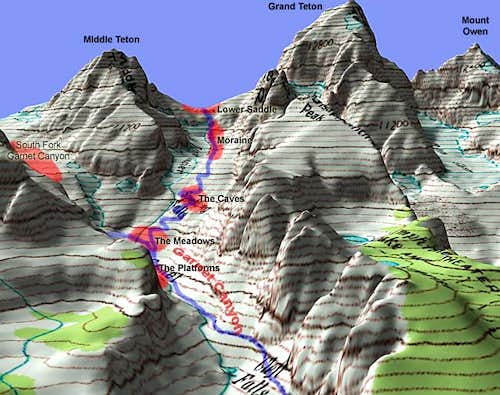 Trail to Lower Saddle in purple. Prepared by: brendon

Start at the Lupine Meadows Trailhead and take the trail up Garnet Canyon to the Lower Saddle. The Route starts from there. It is pretty much a straight forward trail hike until just below the saddle where snowfields may be encountered early in the season. The final bit to the saddle proper is a scramble aided by a fixed rope. 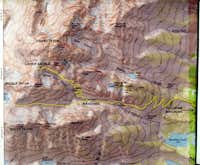 Views of the Approach:

From Lower Saddle follow the climbers path north up the gully past the black dike and toward "The Needle" which is passed on its left. At an apparent impasse after passing a tower on the central rib that splits the two gullies descending from the Upper Saddle, and after a blocky side chute, ascend Class 3/4 rock to pass the chockstone. Cross on the chockstone to climbers right. Backtrack through a hole (Eye of the Needle) to an area where the Central Rib can be gained. 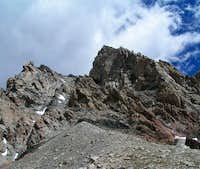 View up from saddle

From here the starting ledge (Wall Street) can be seen on the wall above. If the Eye is missed there are variations at Class 4+.

Photos between the Lower Saddle and Wall Street:

Wall Street to the Summit 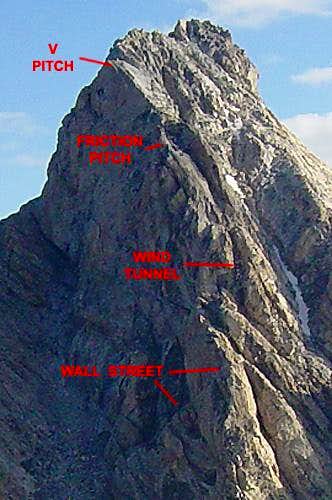 The Upper Exum Ridge from the Middle Teton showing the location of four "landmark" pitches.

The start of the Upper Exum Ridge is marked by a large, ascending ledge called Wall Street leading from the gully to the ridge proper. The step around at the end of Wall Street is extremely exposed and though not especially difficult, can be quite intimidating. Wall Street Photos:

After one pitch on golden rock (Golden Staircase), bear right up and under rocks (often icy) to a chute known as wind tunnel. Wind Tunnel Photos:

Above this, follow the ridge or corners to the right for several pitches until the crux slab is reached. The slab (Friction Pitch) is rated 5.4. Protection is very minimal but the first 20 feet are the hardest. Friction Pitch Photos: 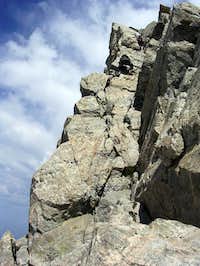 Several rope lengths of easier climbing above the Friction Pitch brings one to a slanting dihedral (V Pitch) to the left of the ridge. This can be bypassed on slabs (often snow covered) to the right.

Above the V Pitch, another pitch of about 60 feet leads to the crest of the ridge at the beginning of the horizontal section. (Note, it is possible to escape the ridge at this point by traversing to the climber's left to the Owen Spalding Route.) Follow the ridge to the summit, bypassing a vertical step on the left via a short slanting chimney and a large boulder via a cracksystem on its right face. Variations: As stated in the Overview, there are numerous variations possible on this route. Generally speaking, the key pitches pointed out above are unavoidable, but even they can be attacked in slightly different ways. 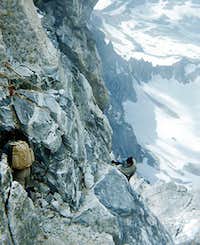 Most parties descend via some variation of the Owen - Spalding Route. See THIS PAGE for a discussion of rappel options on that route. The descent option chosen will determine whether you wish to carry one or two ropes for the Exum Ridge.

Rope (see Descent section) and small rack. Possibly ice axe and crampons depending on the time of year and conditions.