This is a live webcam view of the Grand Teton from the west which updates every 30 minutes.
Due to night hours or weather, the mountain may not always be in view.
Also, if there is no photo, the webcam is temporarily down.

Webcam direct linked with permission from Pat Neeley.
Click on the above webcam photo for current conditions and a larger version of the webcam view.
Here are more webcams from Pat's website including time-lapse photos of Grand Teton and Teton Valley.
Thanks to Pat for the use of his webcam.

More Webcams
This page was graciously transferred to me by fellow SummitPost member Allan Ellis. He is responsible for most of the great information on this page. I hope to maintain the same quality that he has over the years!

The Grand Teton! Even the name inspires one to explore and climb it's classic routes. Grand Teton is a classic alpine peak in itself to the point that an entire national park was named after it. Climbers have been drawn to "The Grand" for over 100 years and continue to make pilgrimages from all over the world. With over 35 routes and 50 variations to those routes, there is something for everyone from 5.4 to 5.12. New routes are being discovered every year including The Squeeze Box, Grade IV, M7, A0, put up by Stephen Koch and Hans Johnstone on February 6, 2007. This new route is on the north face and lies between Shea's Chute and the Alex Lowe Memorial Route, and ascends a weakness up a beautiful granite buttress (www.StephenKoch.com). Even the easiest route, the Owen-Spalding, is a technical endeavor and should not be taken lightly. At Grade II, 5.4, the Owen-Spalding is the standard route and requires technical rock climbing skills and equipment. The Exum Ridge route is the most famous, named after Grand Teton pioneer, Glenn Exum.

The first ascent of The Grand was on August 11, 1898 by William Owen, Franklin Spalding, Frank Peterson, and John Shive via the now-called Owen-Spalding route. Although the Owen party is officially credited with the first ascent, there is a controversy on whether they were actually the first to climb The Grand. Supposedly, Nathaniel Langford and James Stevenson climbed the mountain 25 years earlier. Read an article on the controversy HERE.The remainder of Grand Teton history is very rich and much too detailed to be described here. The references listed below are highly recommended for a detailed history of the mountain. One reason the early history of climbing The Grand is so well known is because the summit logs have been maintained by the park superintendent since 1927. This rich history continues to this day.

CLICK HERE TO VIEW THE SUMMIT REGISTER ARCHIVE: This site contains a collection of digital images of the Grand Teton National Park Summit Register Archive including the register for the Grand Teton. The summit registers were maintained from about the late-1920s into the 1980s and they form a unique repository of Teton climbing history.

The three Tetons: Grand, Middle, and South were named in the 1800's by French Trappers of the Hudson Bay Company. They called them Les Trois Tetons, which meant “the three breasts.” Early native American Indians of the Shoshone tribe called the range “Hoary Headed Fathers.”

BTW: A common mistake is for people to call the Teton Range "The Grand Tetons." The proper term is "the Tetons" or "the Teton range." The Grand Teton is a single mountain and deserving of distinction.

Sources:
Mountaineering In The Tetons, by Fritiof Fryxell
A Climber's Guide To The Teton Range, by Leigh Ortenburger and Reynold G. Jackson
Climbing Magazine, Issue 267; July 2008

Much of this page courtesy of William Marler. 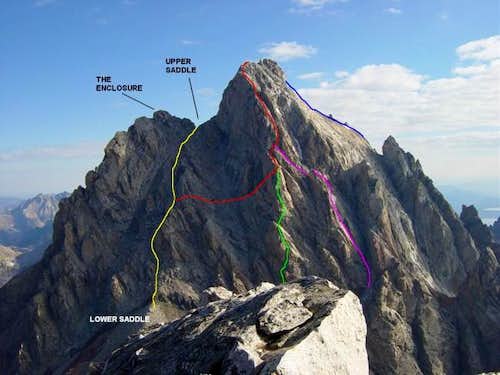 Lupine Meadow trailhead is the jumping off point for most routes on the mountain. Expect a lot of cars at this trailhead. From Lupine Meadow Trailhead (6732 ft) follow the trail up through Garnet Canyon. At 1.7 miles the trail forks. Stay right and continue for 1.5 miles where the trail forks again. If climbing the Owen-Spalding, Exum Ridge, or Petzoldt Ridge, go left, following the signs to Garnet Canyon. After 1.1 miles, the Platforms (8960 ft) campsites are reached. Shortly after, the trail crosses a moraine field and reaches the Meadows (9200 ft) camping area after another 1.0 miles. At the Meadows, a small log bridge will greet you to the left. Stay right and follow the trail as it begins to switchback up toward Spalding Falls. Above the falls, the trail continues climbing until reaching the Lower and Upper Moraine campsites. Above the Upper Moraine campsites the Lower Saddle headwall will appear directly to the west. Use the fixed rope to ascend the class 3/4 headwall section. A short hike above the headwall will end at the Lower Saddle.

If climbing North Face routes or the East Ridge, your trailhead will be the same, but you will go go right to Amphitheater Lake at the second fork (3.2 miles from Lupine Meadow trailhead).

Refer to the left side-bar for a list of available routes to the summit.

Grand Teton is located inside Grand Teton National Park. There is a $25.00 entrance fee (per vehicle) to the park which will also get you into Yellowstone (Good for 7 days). See more info below for other entrance fees. No permits or fees are required to climb; however, a check-in with the Jenny Lake Ranger Station is recommended.

Backcountry Camping Permits: Permits are needed for backcountry camping if using a high camp. Free permits are available at the Jenny Lake Ranger Station on a first come, first served basis. A limited number of permits can be made in advance by submitting your request in writing to the address or FAX number below. Reservations may be made as early as January 1 and are accepted up to May 15. Although the permit is free, there is a $15.00 non-refundable reservation fee. For more information call (307) 739-3397 or (307) 739-3309. Even though you have a reserved permit, you must pick up your permit in person by 10:00 am the morning of your trip or they will make it available to others. Backcountry Camping Brochure (PDF)

SOME ADVICE ON PERMITS: There are advantages to both getting your permits in advance and advantages to waiting and getting them the day before your climb. If you get your permits in advance, you are guaranteed a permit, but your climb day is at the mercy of the weather. If you wait and get your permits the day before your climb (on a first-come-first-serve basis), you can look at the forecast while you're there and choose which weather day offers the best chance of success for your climb. However, you then take the chance that everyone else is doing the same thing and you won't get a permit. The other disadvantage to getting your permits while there is that they only issue permits the day before, so you have to waste a entire morning "getting a permit" when you could be climbing instead. Most people have no problems getting the permits they need while there but you need to the permit office VERY early (long before they open at 8:00 am).

Vehicle single entry $25.00 for 7 Days, $12.00 per person for single hiker or bicyclist, or $20.00 per motorcycle. You may also purchase an "America The Beautiful Federal Lands Recreational Pass" for $80.00 which is good for entrance to all National Parks, National Forests, BLM, US Fish & Wildlife, and Bureau of Reclamation sites for one year from date of purchase. If you're disabled, you may want to get an Access Pass which are free and good for a lifetime. If you're 62 years of age or older, a Senior Pass can be purchased for $10 and they're also good for a lifetime. Click here for more info on fees and passes. Existing National Park Passes and Golden Age/Access/and Eagle Passes will be honored until they expire. (Info courtesy of SP Member Sequoia)