Whitetop Mountain is the third highest peak in the state of Virginia. It towers above the slopes that plummet down toward Damascus, and is connected by a wide ridgeline to another of Virginia's few 5,000 foot peaks, Buzzard Rock.

This peak is also home to the highest auto road in the state, a well groomed gravel track that leads from SR 600 to very near the absolute summit. The very top of the peak is clothed in a very healthy spruce-fir forest that, like the one on Mount Rogers, was spared the depradations of the wooly aphid that, along with the weakening effects of acid rain, denuded the highest peaks of the Southern Appalchians in North Carolina during the 1980s. I have no idea why these two peaks and their ridges were spared.

Whitetop Mountain, like the nearby Grayson Highlands, also has prime examples of high country meadows we commonly refer to as "balds" in this part of the country. The views from these meadows, just below the summit ridge, are among the finest in the Southern Appalchians. From these peaks, one can stand and view such notable summits as Grandfather Mountain, and see the slopes of the Ski Beech resort far off in the distance.

From I-77, take 21 north. Pass under the Blue Ridge Parkway, go through Sparta, and take 221 North toward Independence. Take 58 North toward Damascus. Pass Grayson Highlands State Park. Soon thereafter, take 600 on the right. In a couple of miles you will see a well marked forest service road on the left that leads up to the summit. One can take this road and drive all the way to the very top of the peak.

If you'd rather hike, continue on 58 toward Damascus. On the right, see a sign marking an Appalachian Trail crossing. Park here and take the AT south. The trail leads 3.8 miles to Buzzard Rock, and a side trail of a half mile will take you the rest of the way to the summit of Whitetop. It's a bit of a pull up the slope with a total elevation gain of about 3,000 feet.

All year. Sometimes the winter weather in this area can be very severe with heavy snowfall. At such times, the auto road to the summit can be gated. Use caution if the weather become icy or snowy. If hiking from up the AT, just use common sense in bad weather. 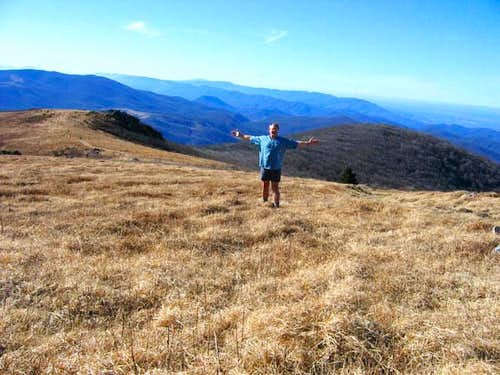 Check the weather for either Independence or Damascus. Subtract at least ten degrees for the highest ridges. 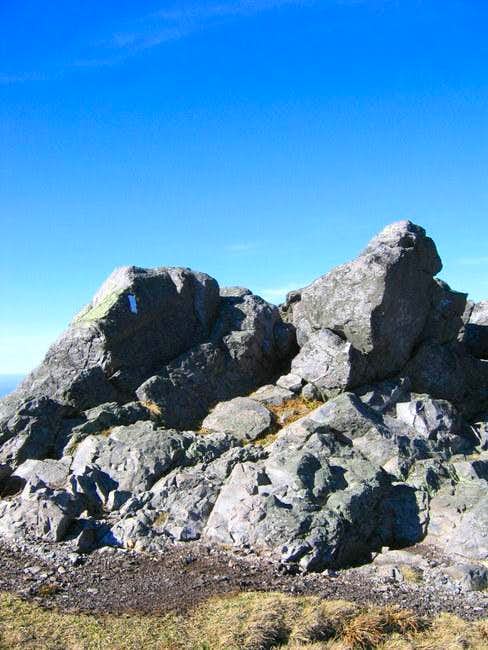 Buzzard Rock is considered a separate peak from Whitetop Mountain. Indeed, I think that on a technicality, it fits the bill. It seems to be a full mile from the summit of Whitetop, and there is about 500 feet of prominence separating them. However, when standing on Whitetop and looking down on Buzzard Rock, it appears that one is merely looking at a lower ridgeline emanating from the body of Whitetop Mountain.

While Buzzard Rock is widely listed as one of only five 5K foot peaks in the state of Virginia, and has its own listing on most topographic maps, I personally don't see it as a separate peak. To me, there does not seem to be enough prominence between Buzzard Rock and the ridgeline leading down from Whitetop. A slight dip is all that defines it from the ridge.

It has been said that Buzzard Rock offers one of the finest grandstands in all of Southern Appalachia for viewing some of the varioius ranges that make up the highlands. I agree. The views here, on a clear day, are nothing less than perfect. The high peaks of North Carolina, Tennessee, Virginia, and West Virginia are all visible from the vantage point of Buzzard's Rock.For now, though, I leave it merely as a footnote on the Whitetop Mountain post.

I've heard that, too. One of the rangers at Grayson Highlands was telling me that there is some evidence of limted glaciation on the peaks there between Grayson Higlands and Whitetop. So they were obviously alpine at one point.

An interesting fact about the Whitetop Mountain bald area is that it is thought to be a last remnant of alpine vegetation in the area, as unlike the Grayson Highlands/Wilburn Ridge area and Elk Garden, it has been bald throughout recorded history (The Native Americans called it "The Bald Mountain").

I've heard that, too. One of the rangers at Grayson Highlands was telling me that there is some evidence of limted glaciation on the peaks there between Grayson Higlands and Whitetop. So they were obviously alpine at one point.

...take the AT northbound (east from the road), not southbound as stated above. About a mile in, you'll reach a pasture from which Beech Mountain will be clearly visible. Buzzard Rock and Whitetop are right behind it. Also note that you can spare yourself 1.3 miles each way and a couple hundred feet of gain/loss by parking at the junction of the AT and Beech Mountain Road (county route 601; smooth gravel; turn east off US-58 north of where it meets the AT). There's space for about five or six cars and plenty of room to pitch a tent (though no facilities or water).