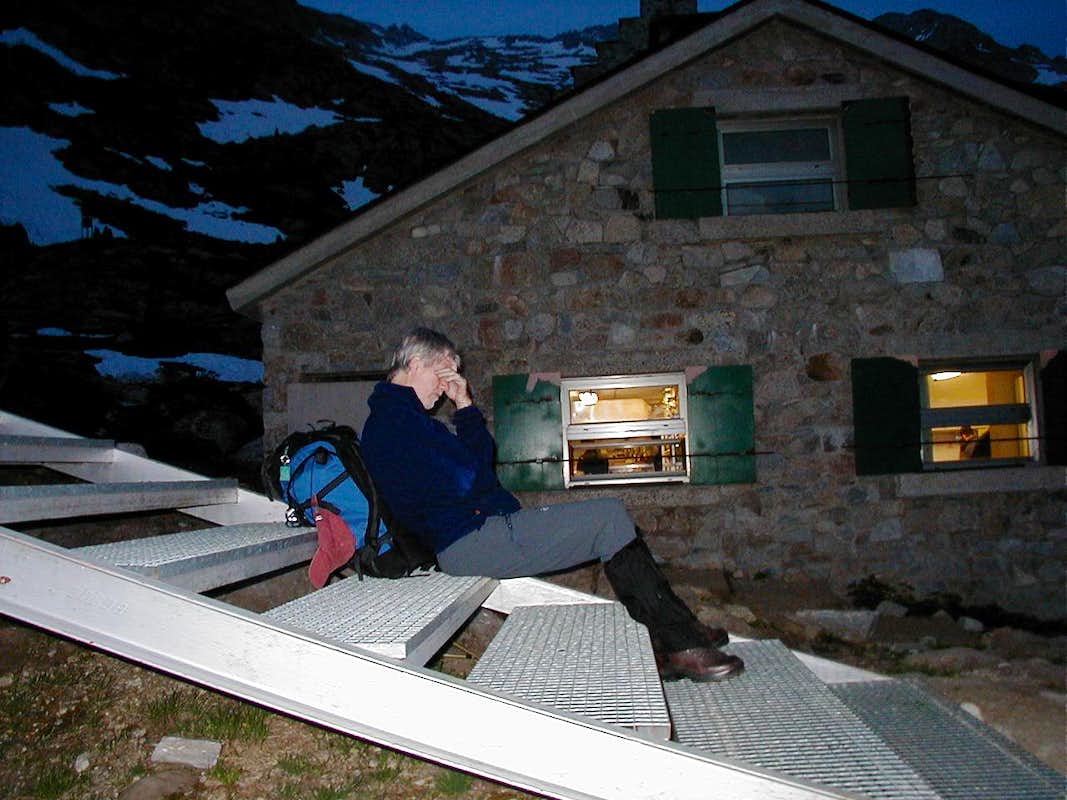 Ken outside the Renclusa Hut

After rising at 3:30am, we drove from the Refugio at Camping Aneto up to the trail head car park at 1897 metres.

From there Ken and I walked briskly up the hill to the Renclusa Hut pausing only briefly to admire a a lovely black and yellow Salamander in the light of the head torches.

Ignoring the delicious coffee aroma from the hut (2140m.) we passed by after a brief rest and headed up behind the hut towards the Portillon Ridge. 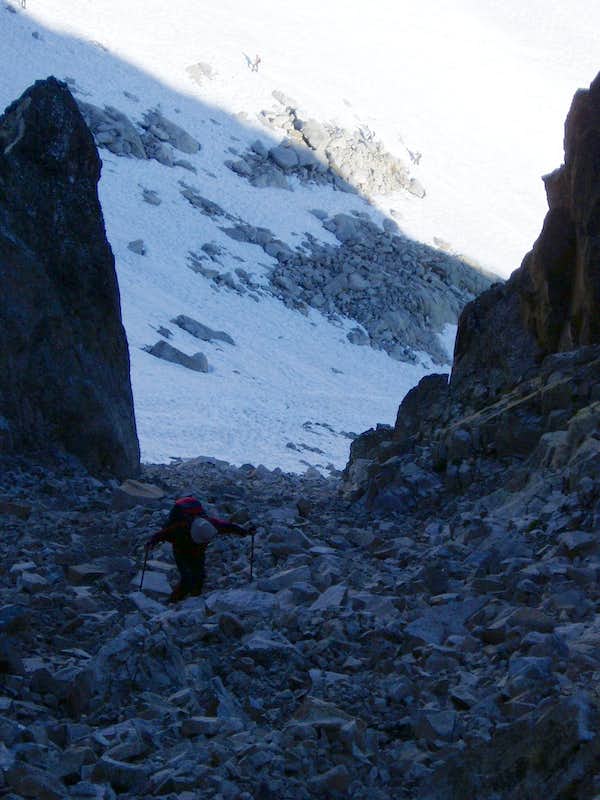 2nd attempt route up a gulley

After a previous attempt earlier in the week, we had missed the Portillon Superior by moving too high up the ridge and we were not the only ones to do the same that morning.

We had found another "Portillon" at around 3000m but Ken, myself and three Spanish guys we met there didn't fancy the descent after an exploratory look as it was really steep, loose and warranted an abseil.

At that time neither Ken or I had an altimeter with us, but after talking to a friendy guy from Zaragoza who was walking up past us with ski crampons he showed us the height reading on his instrument, it was over 3000m!.

We descended to the real Portillon but by this time it was around midday and we decided that the snow on the Aneto glacier would probably be too soft and anyway we were tired out, it being our first day on the hills. So we retreated back to the valley.

As we descended from our first attempt we noticed an interesting gully below the 'real' Portillon and we decided to use that on our second attempt, to gain height a bit more rapidly. 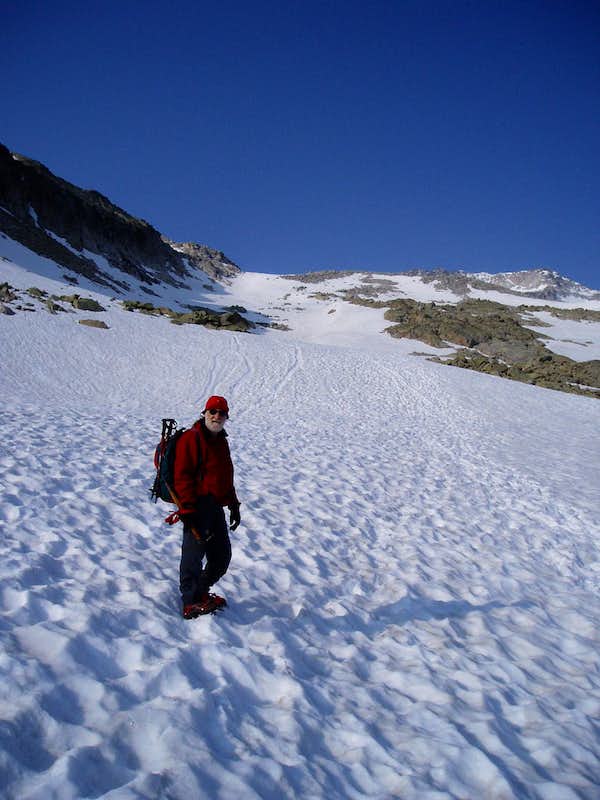 Jonnie below the Portillon superior

On the second attempt, above the gully we had spotted earlier, the snow was frozen hard and only needed to be caressed lightly by our crampon points. Moving up towards the gap seemed quite hard work, but as usual we were loaded with our normal "expedition" weight sacs, filled with loads of spare kit and safety equipment for every eventuality. 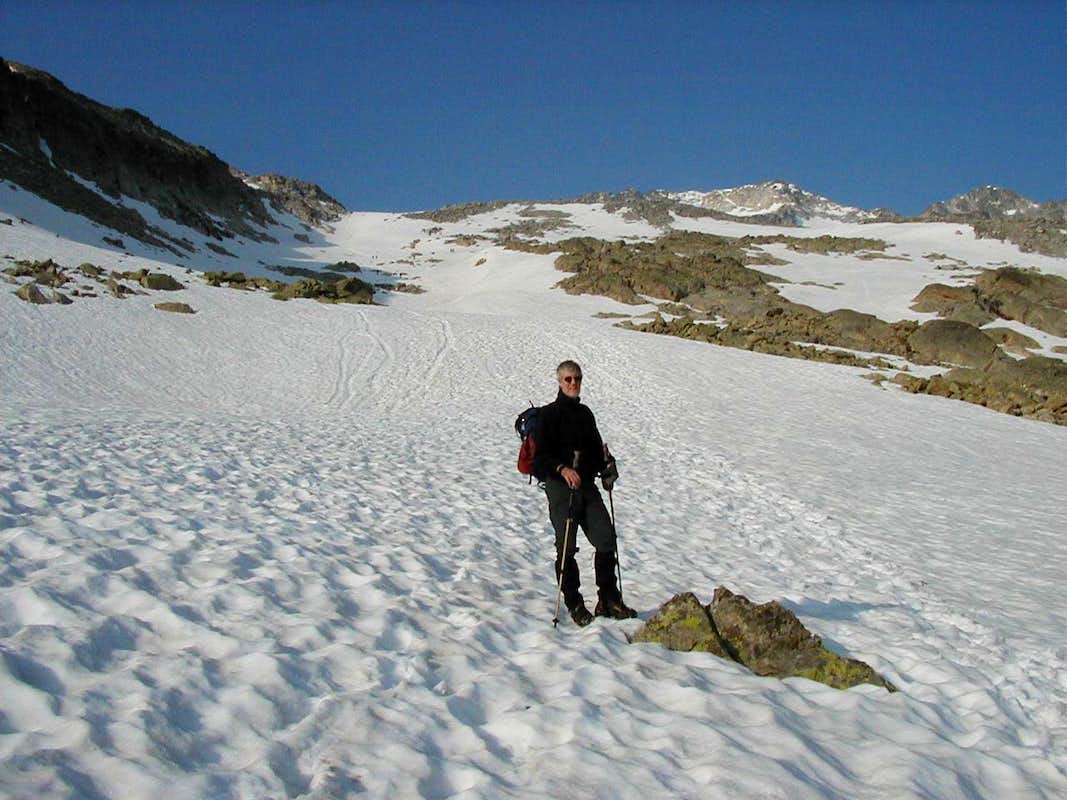 Looking around at the beautiful panorama of the Maladeta massif and surrounding hills we were amazed that there were so few people around. In the UK in June, the hills are alive with the sounds of people. 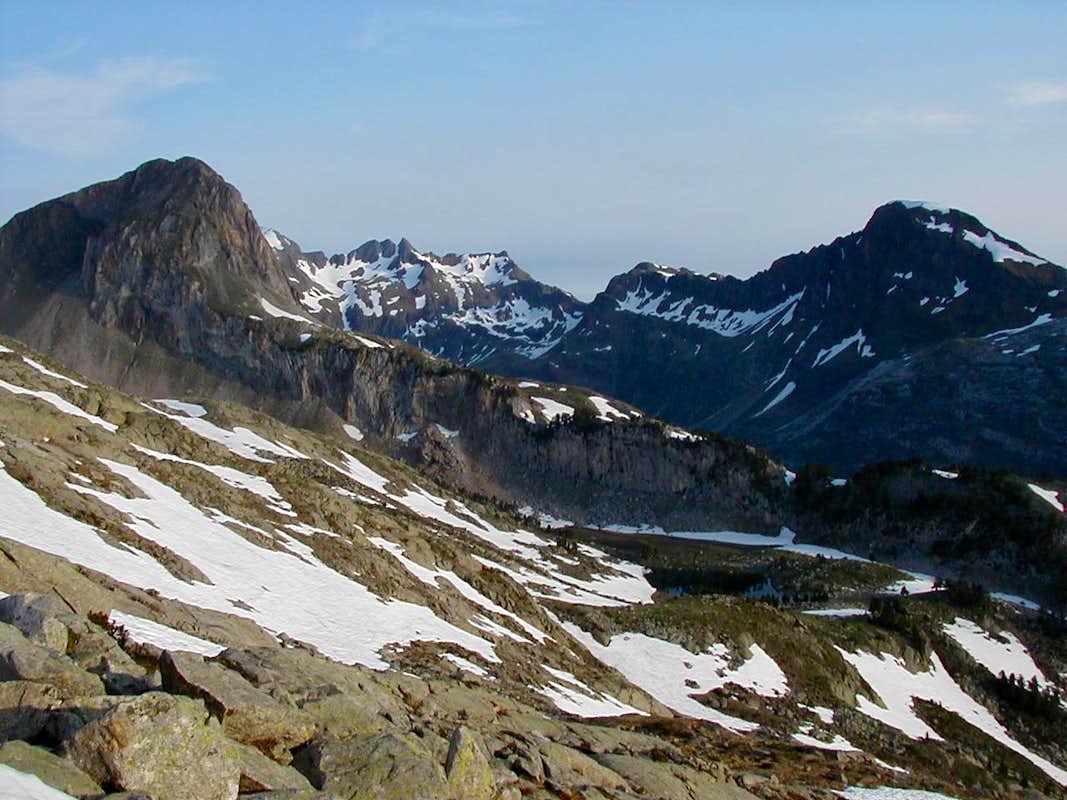 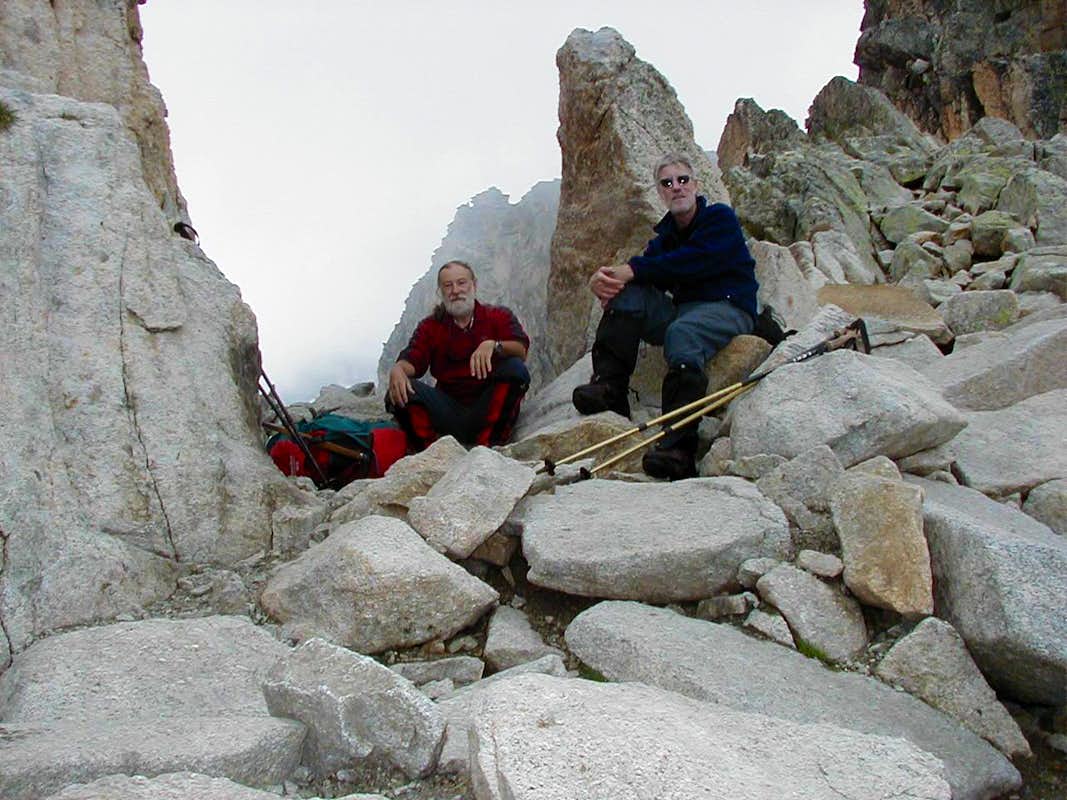 Our first sight of Aneto from the gap
We took a short break at the gap (2870m.) to get our breath back before making the easy descent onto the Aneto glacier. 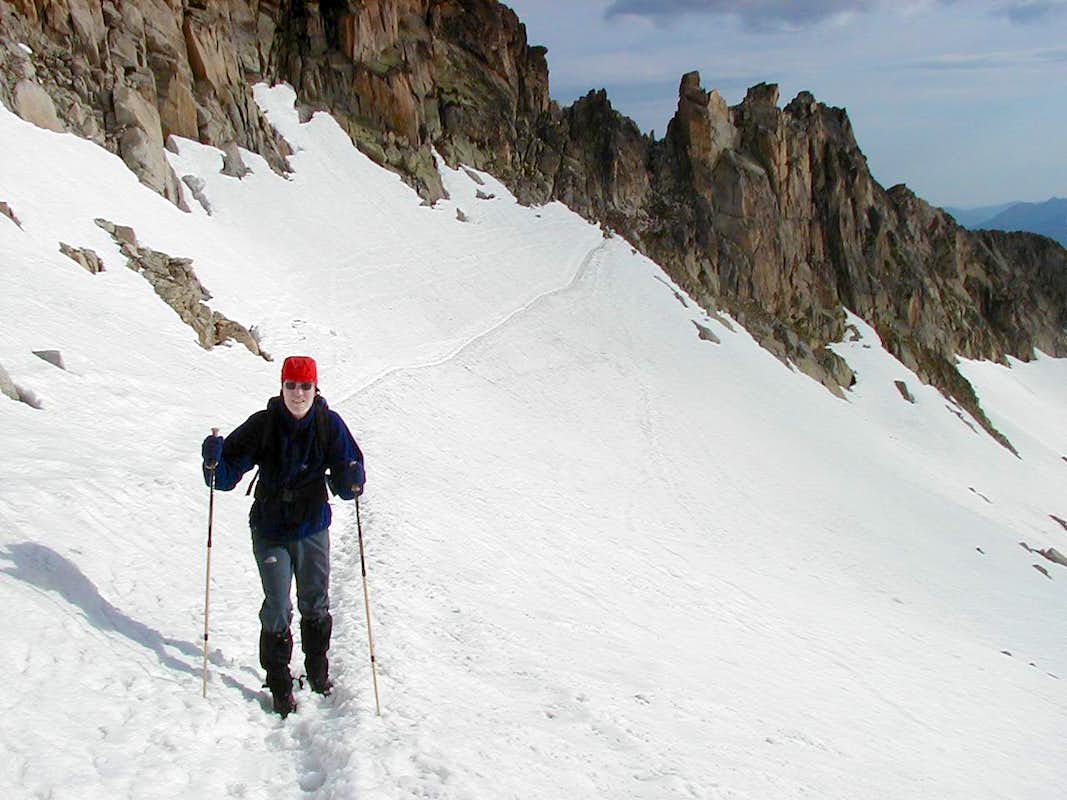 Ken heads out on to the glacier

The glacier looked very smooth and free of crevasses and a clear trail led from the gap towards an area of large broken rocks. (I believe that the crevasses appear later in the season and require more care crossing the glacier.) 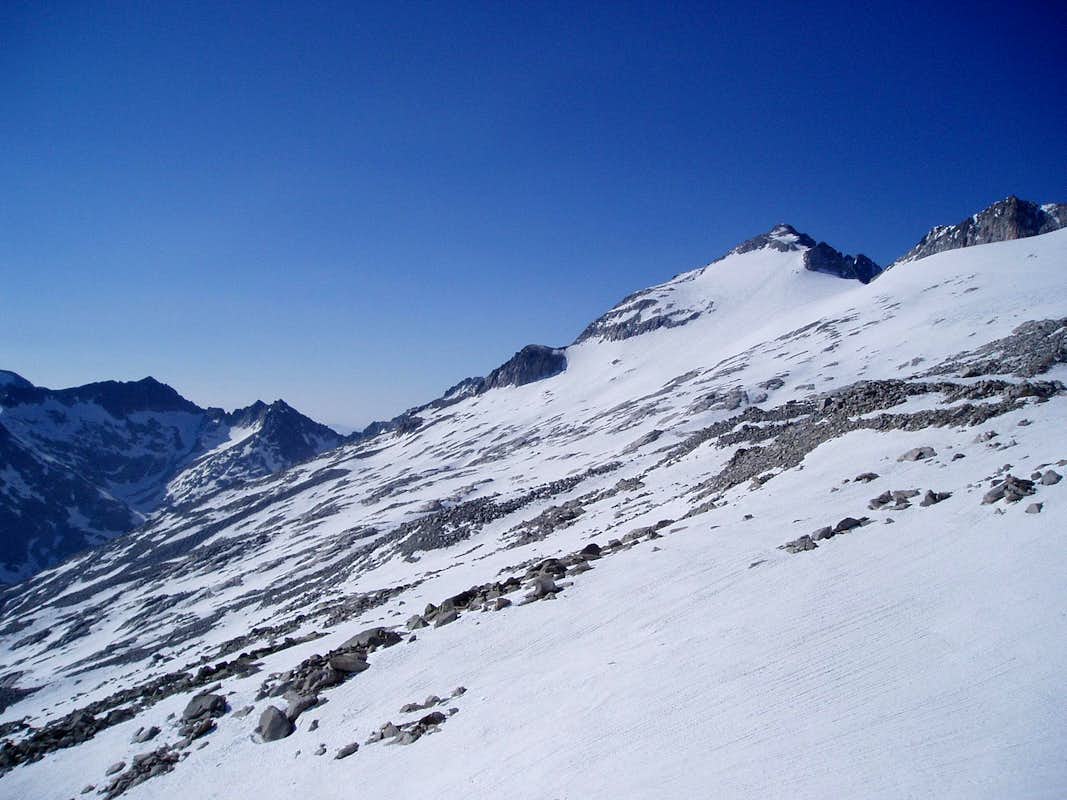 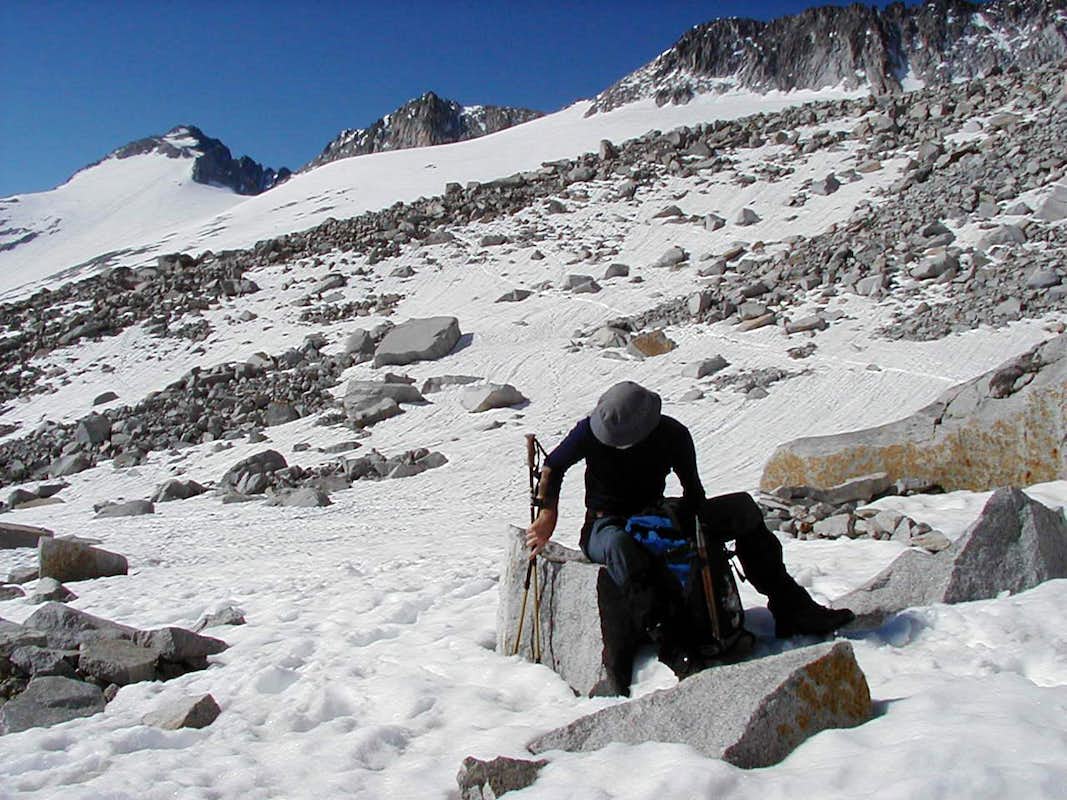 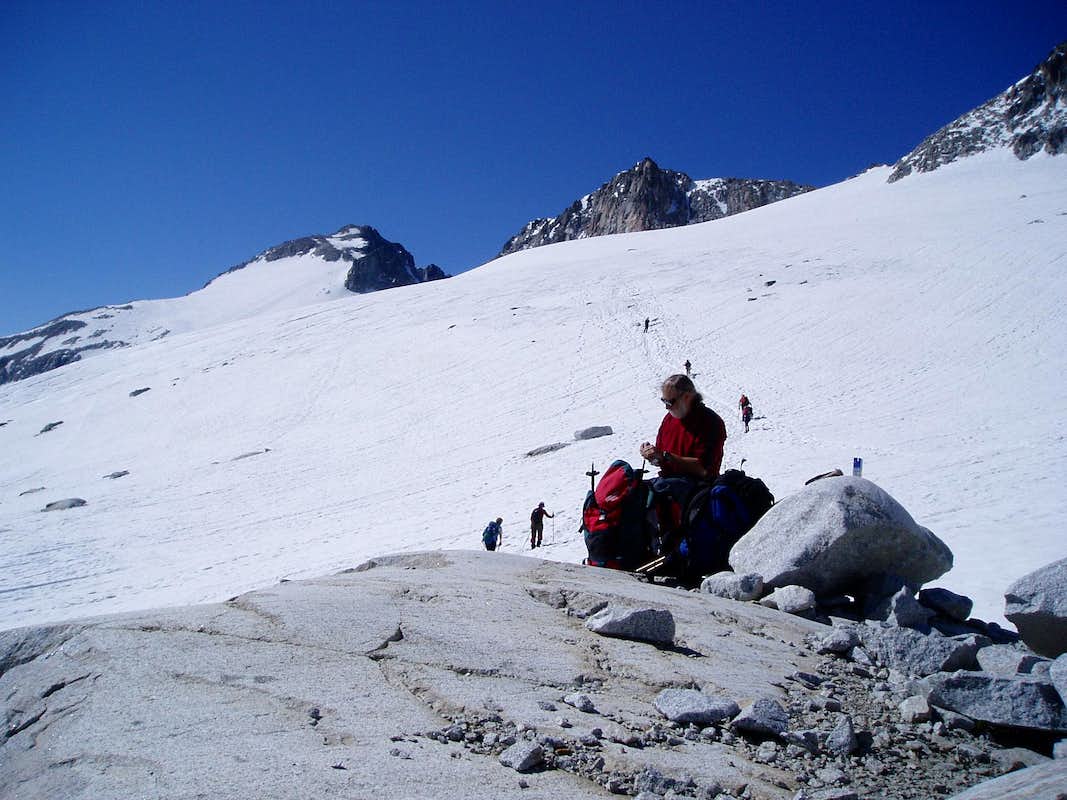 We took a break when we reached the rocks for a breakfast snack around 7:30 and looked forward to ascending to the Collado de Coronas (3196m.)


After we left the rocks, we were following a large party of Spanish guys & girls, they seemed to be leaving us standing, this we put down to the aforementioned expedition sacs. 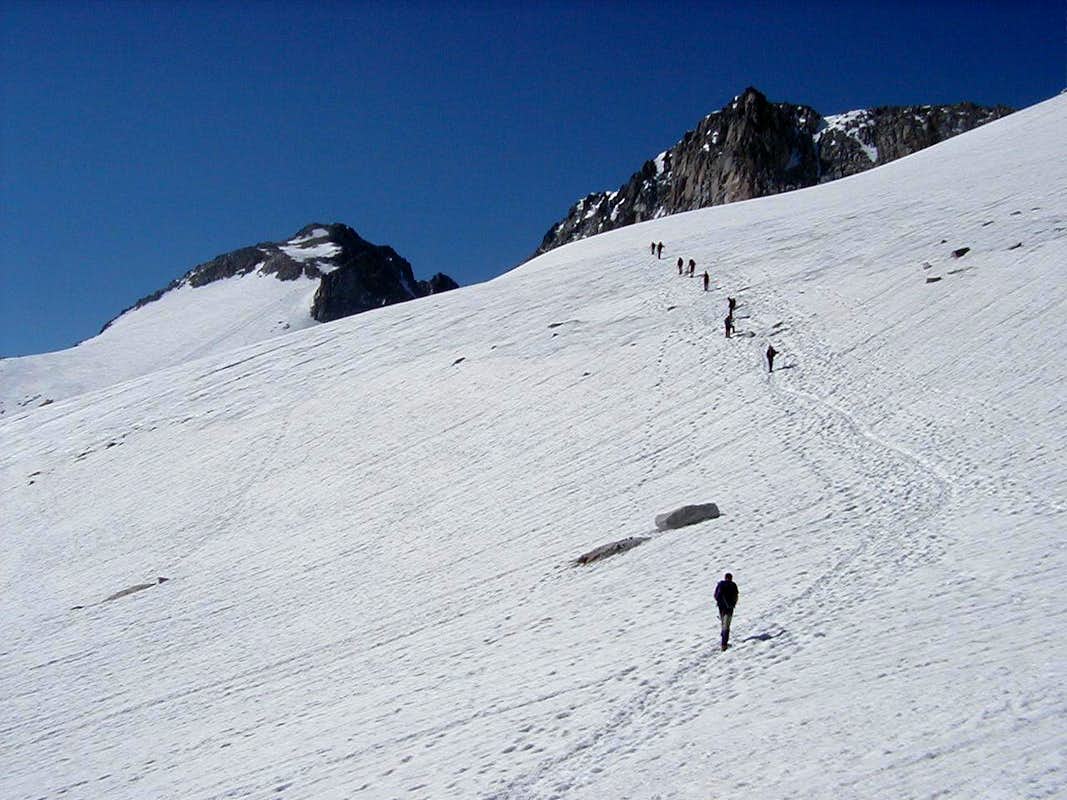 We finally arrived at the Collado still trailing the Spanish party and took a well earned break before ascending the final summit slopes of Aneto. 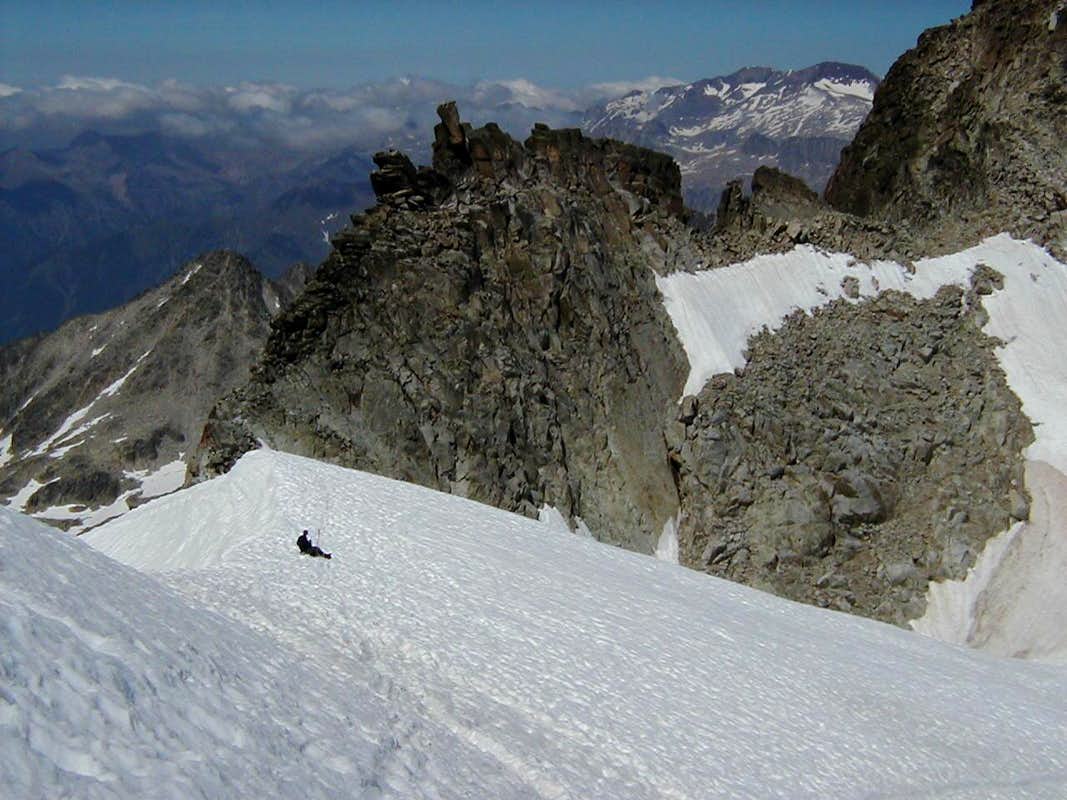 We had read about the Puente de Mahoma, likened to a knife blade ridge in the Cicero guide and we had wondered whether a rope would be needed. 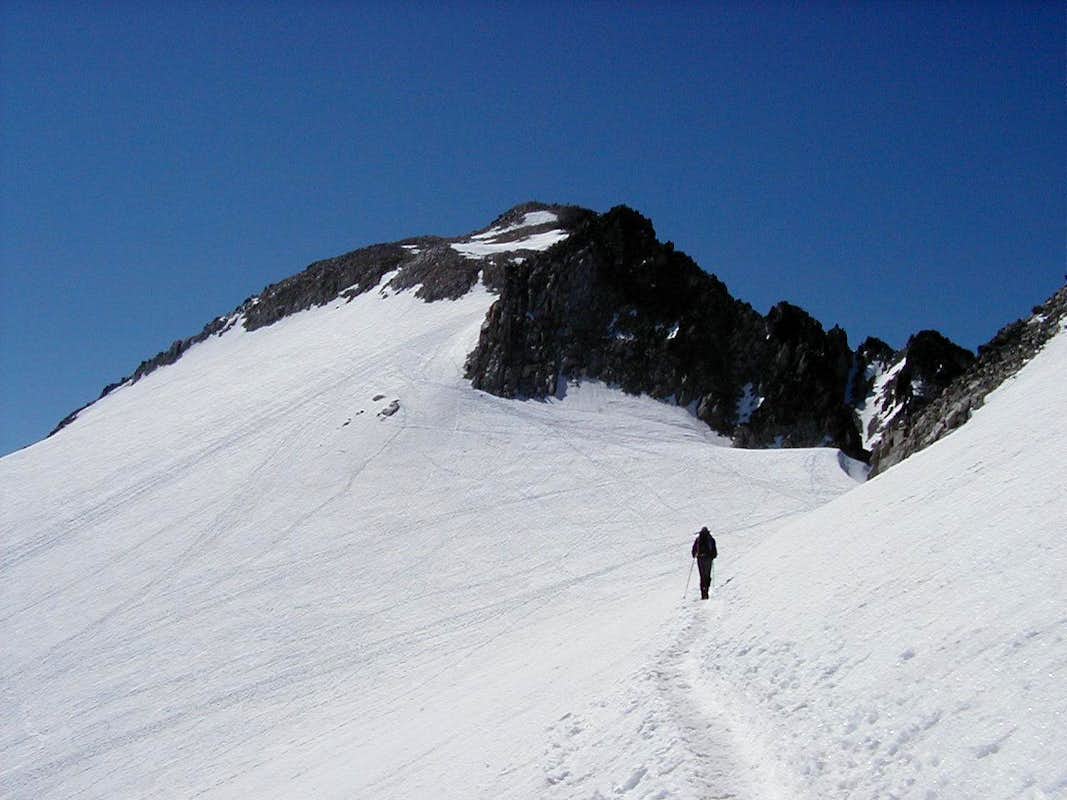 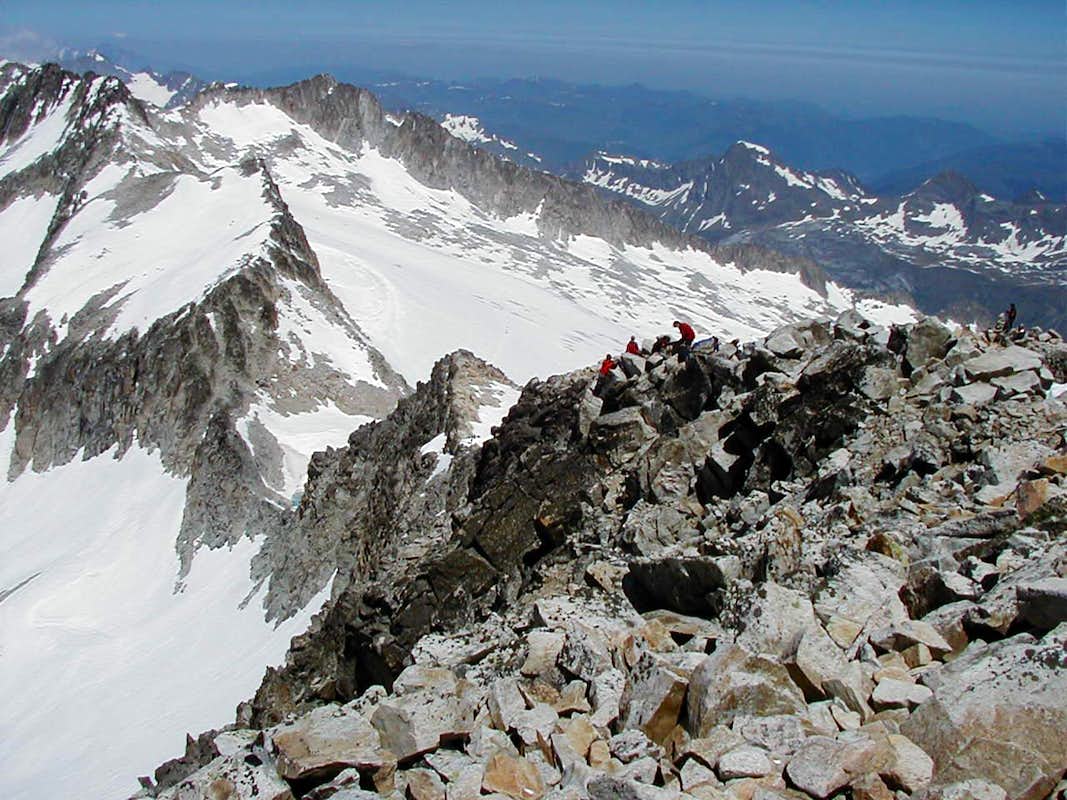 We may have strained the "entente cordial" a little bit when we passed the large Spanish party on the rocks. They had a fixed rope in place probably to protect some of their less experienced members.

We had a good look before crossing the ridge to the summit and found it to be beautiful dry, rough rock. In summer conditions, a rope is not absolutely necessary if you can move confidently on steep ground with a lot of exposure, but in situations where verglass is likely to occur a rope would be recommended by us as there are long drops on both sides of the ridge. 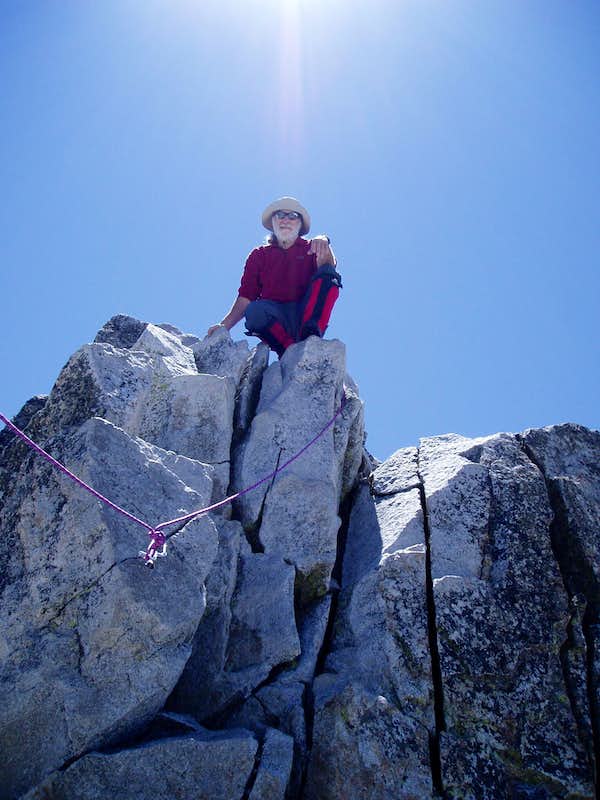 Ken really enjoyed getting his hands on the rock after the long snow slog. 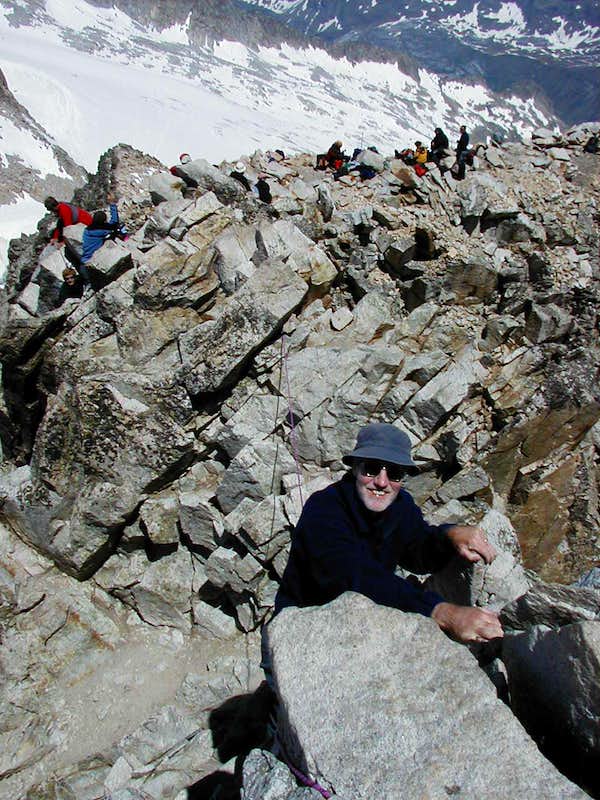 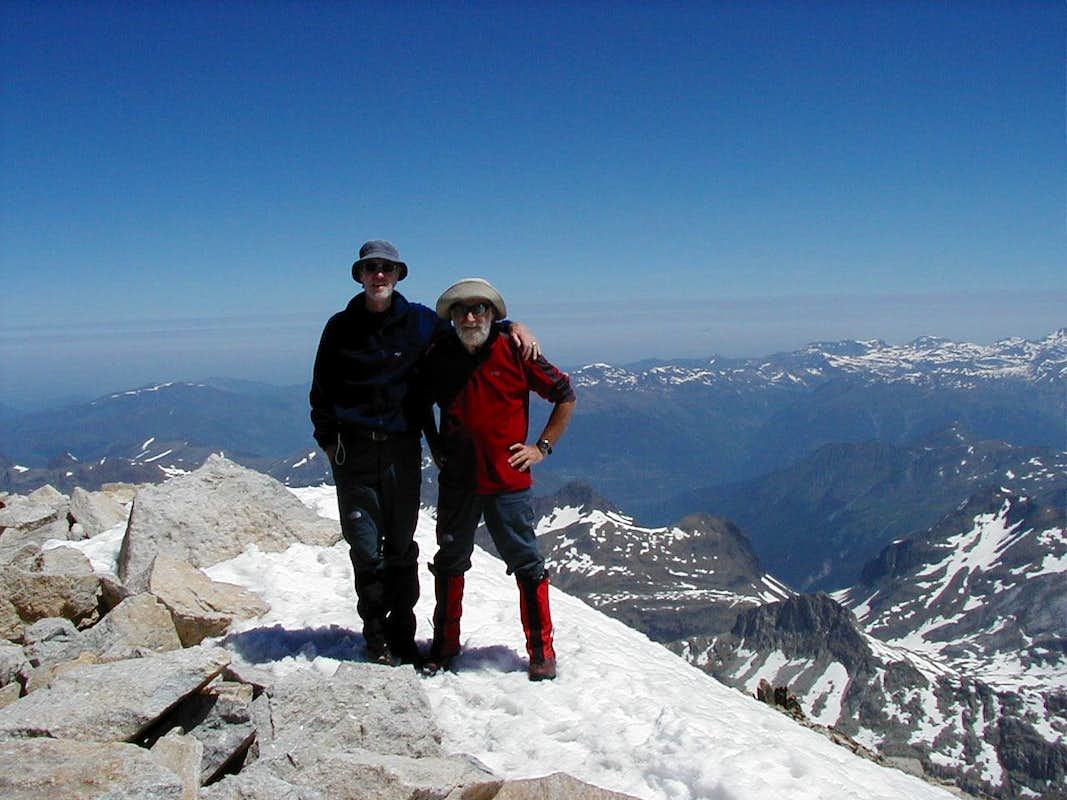 We made it!
We arrived at the summit (3404m.)at 10:30 am with a French solo mountaineer just ahead of us. We persuaded him to record the event for us which he kindly agreed to do as you can see. We were really elated to be up there and we stayed to enjoy the crisp mountain air and take in the excellent views for a least 20 minutes.

We took the usual summit fotos and noticed that whilst doing this, the large aluminium cross shown in pictures we had seen prior to the ascent was missing and only a broken stump remained (see gap between Johnnie and the pillar). 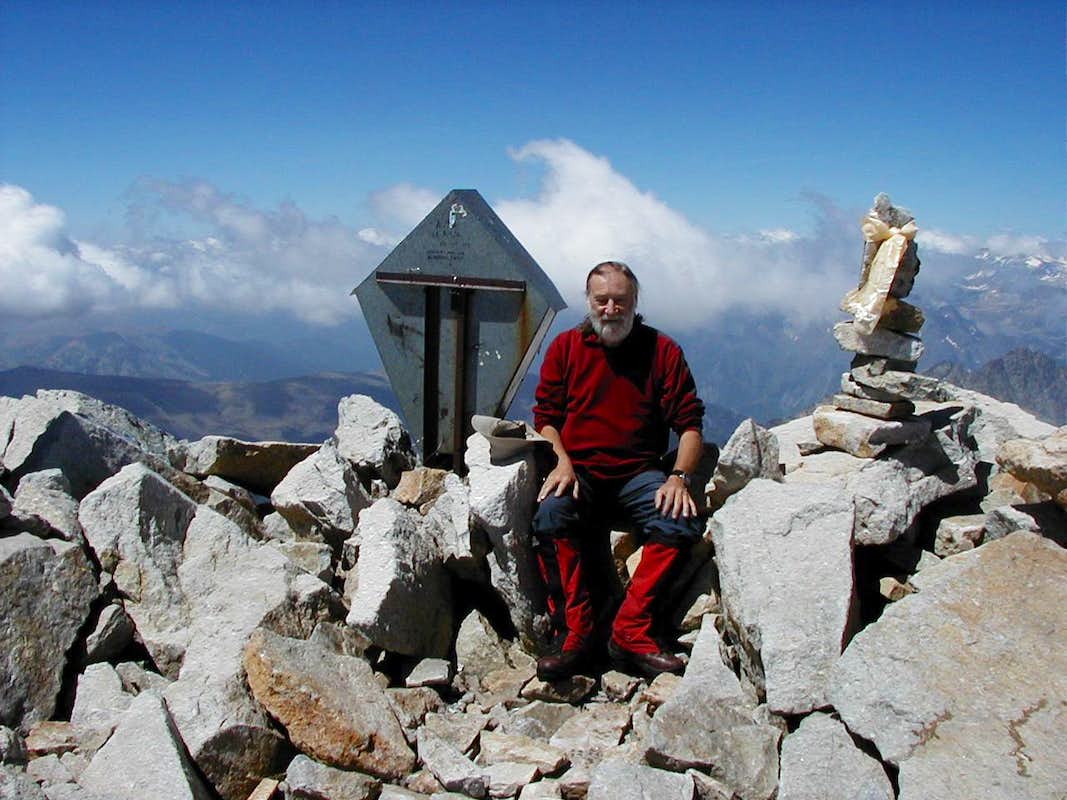 We remarked on the missing cross to our waiter during a celebratory meal at the Hotel Ciria in Benasque. On the restaurant wall was a summit foto featuring the waiter and friends alongside the cross. He was horrified and refused to believe us until we showed him the photographic evidence. (Info from Rafa: The cross was reinstated in 2006.) 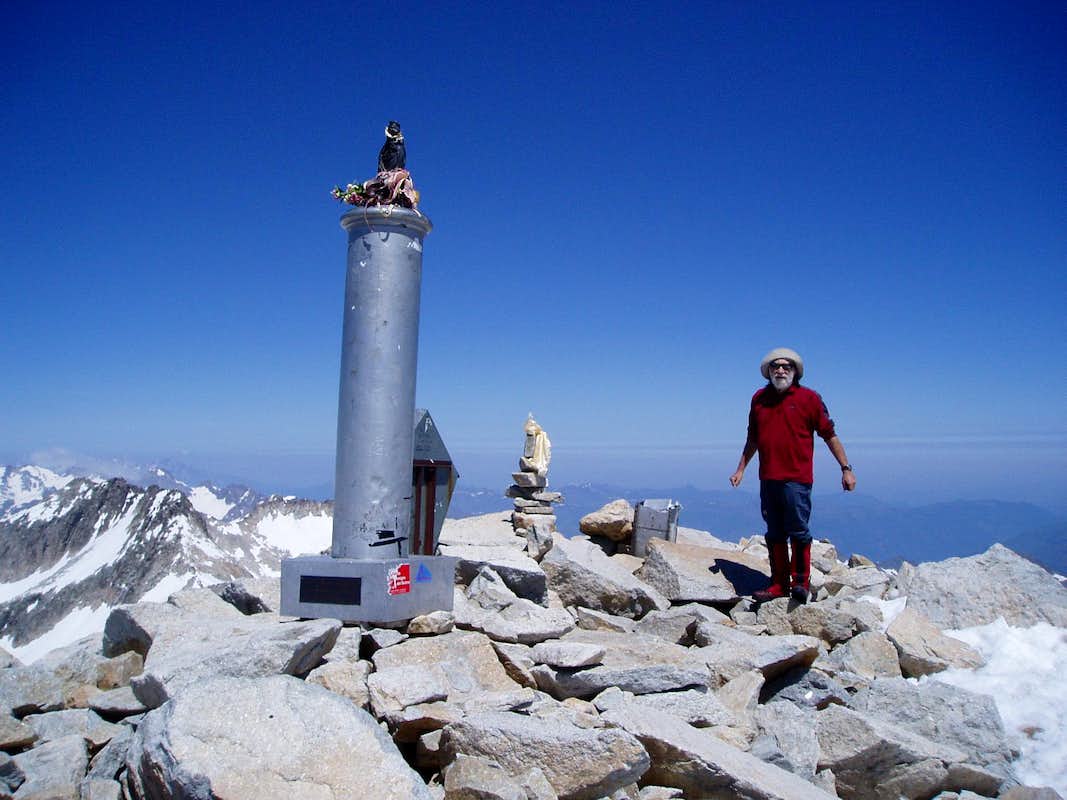 A great outing on good snow and rock culminating in brilliant views from the highest peak in the Pyrenees.

Excellent local accomodation in mountain huts and on campsites, lots of bars and restaurants in Benasque (pictured) and a great Sports emporium for stocking up on gear. 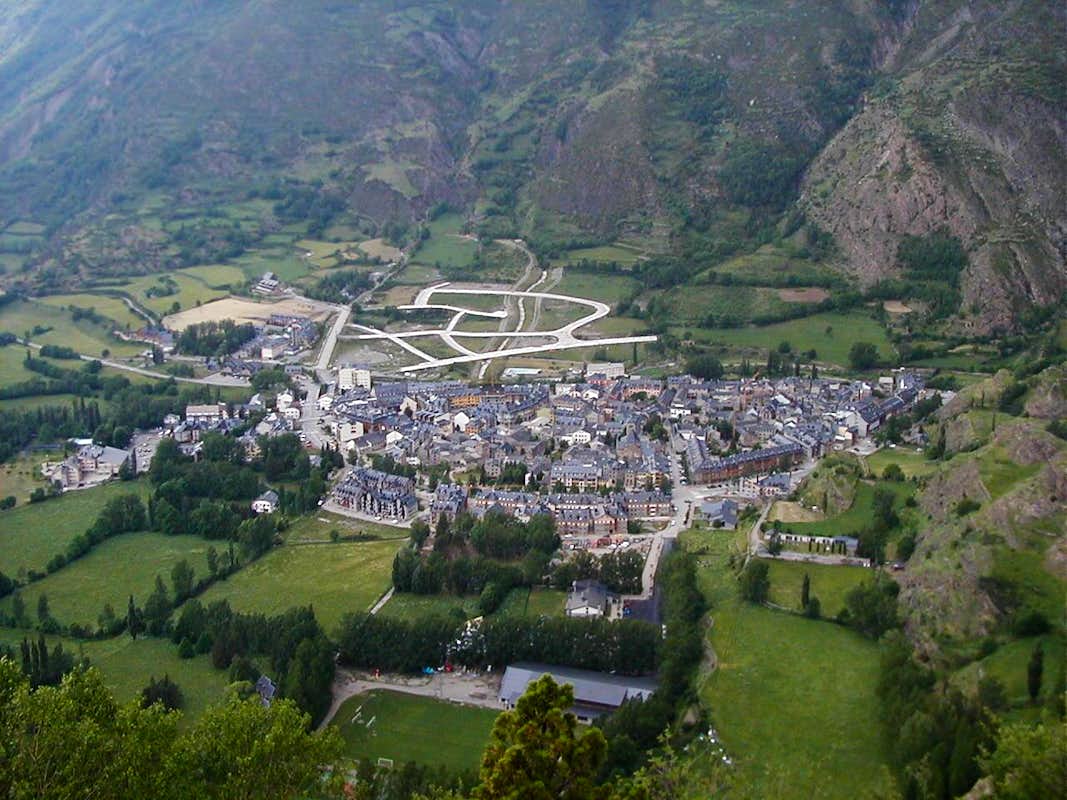 
We would recommend early starts and finishes to avoid the thunder storms which seemed to appear regularly each afternoon during our one week visit around 4:30 in the afternoon.

for the summit, and thanks for your commentaries and your pictures about our nice peak. The cross is nowadays reppair (I climbed Aneto in 2006 and it's there).

I hope to do it this next november. So your trip report is very useful to me. THANKS A LOT!!

when we did it the snow covered all the crevasses, I'm not sure what the state of the glacier will likely be in November. It might be worth starting a thread to get some condition advice from others who have done it in winter.
good luck on your trip.
cheers Johnnie

Hi there, this is a great story.

Just a small point - Aneto is in the province of Huesca - or even in Cataluña, depending on your point of view - but I believe it is definately not in Navarra.

I didn't know that about the cross going missing (or falling off or whatever). Well, last year it was in place, and in 2008.

I've never done Aneto in Winter, by the way, so can't give you any help there.

Gracias OJO, you are correct. I should have said Aragon!
By the way, we were there again this year (see my 2010 trip report)
But! didn't make it to the summit as the Way of Mahoma was snowed over and we had no rope with us. By The way Rafa Bartolome confirmed that the Cross had been replaced after our visit.
cheers Johnnie

Hi Johnnie. I'm away to read your trip report now! What a shame about Mahoma, but never mind. At least you'd done it before and anyway, it must have been super-spectacular to be there with the snow. My two ascents have been in August, so never had that problem.
Saludos.
j