If you read any guidebook about hiking in Utah, you are almost bound to come across a description of Upper Muley Twist Canyon, complete with rave reviews calling it one of Utah's finest hikes. A total of about 10 miles (if you have the high clearance necessary to make it to the 4wd trailhead-- if you don't, it's closer to 15 miles), the route goes up the canyon, where dramatically colored walls and several arches are on display, and then climbs to the crest of the Waterpocket Fold before descending back into the canyon and returning to the trailhead.

As I developed into a "summit snob" over the years, I began to have an increasing disdain for hiking on trails simply for hiking's sake. Trails became approaches to off-trail routes, little more. When I found myself hiking on trails with friends and family, I found myself bored and caged. And, truth be told, I am still this way. It is very hard for me to enjoy a trail hike unless I am alone and hiking very early in the morning, virtually ensuring solitude.

So there was once a time that I really wanted to do the loop route in Upper Muley Twist Canyon. When I got my first opportunity, though, it was a no-go; my wife and I had our six-month-old son with us, and neither he nor I was ready for a ten-mile day with him in the pack. Instead, we hiked to Strike Valley Overlook, only about a mile from the parking area. 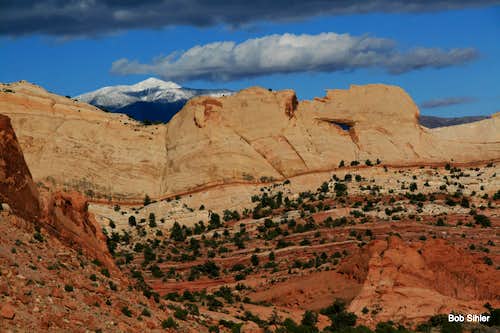 Peek-a-Boo Arch, one of many in the canyon
Years passed, including years with return trips to Capitol Reef National Park and even drive-bys of the access road for Upper Muley Twist Canyon, but it was with a supercilious sneer that I drove by, for summits were on my mind, even though I secretly still wanted to do the canyon.

Last fall, when my wife and I were spending Columbus Day Weekend and a few extra days in Utah, without kids, we decided to do the loop.

And it was worth it. Colorful canyon walls, short sections of low-walled narrows, several arches, sweeping views from the rims above...great stuff and a little of everything that is great about southern Utah all in one place. Another nice thing was that it is, as many maps and descriptions state, more a route than a trail, and there is even a bit of easy scrambling. There is a rugged feel to it, nothing to really wow a seasoned mountaineer but still much better than the typical groomed trail, and it is not so suitable for the tourist types looking for their postcard pics. The route is almost cairned to death in some places, but it doesn't degrade the experience too terribly much.

In short, it's a lot of fun, deserving of the praise, and worth the effort.

Nothing revelatory or dangerous happened on this outing. This trip report is simply to document this wonderful place in words and photographs.

The day began as it often does for me-- I was alone. We were staying at the Best Western on UT 24 just east of Torrey and just west of the park. As my wife slept, I went out the sliding glass door to catch day's first light on the cliffs and buttes behind the hotel.

Then I drove into the park, getting some nice dawn shots of formations near the western entrance. These included the Twin Rocks, two cap-like formations that many a visitor stops to photograph but which are visited by few since they-- gasp-- are several yards from the road and require a lung-bursting ascent of about 100' up dirt slopes to reach. So the pictures of the Twin Rocks here are from my short but very worthwhile trip to see them up close and circumnavigate them. 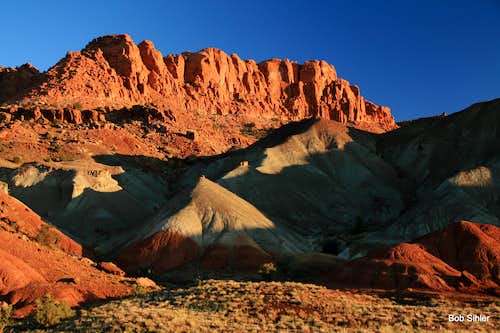 After breakfast and checkout, where I secretly bought my wife a pair Native American-made gold earrings (probably really made in some sweatshop in China and then marketed for suckers visiting the Southwestern parks), it was off on the long, bumpy trip down Notom-Bullfrog Road and then up the Burr Trail to the turnoff for Upper Muley Twist Canyon. We started our hike a little before 11:00, which was nice because I'd get morning light on the arches, which face east, and get afternoon light on the mountains and mesas to the west that are visible from the Waterpocket Fold portion of the route. It was a wonderful day-- sunny, warm, and not much breeze, not even up high.

So now let's have a look at this route.

It's just about impossible to miss Peek-a-Boo Arch, but if you're driving up the road, which means you're hopefully paying attention to the conditions, it's easy to miss the other two. When we drove up the first time, we did see all three, but this past time, we missed the second and third on the way in and only noticed them on the way out. These are very large arches, but they're still somehow easy to miss. (I have no picture of the third one because the sun was in the absolute worst position for a shot when I viewed the arch in the afternoon.)

Four of the five arches along the route:

Saddle Arch is the highlight, and intrepid people can scramble to its base using some step-like honeycombs that have been worn into the rock over time either by weather or by climbers, but the large arch a short distance before it is also very impressive. The third and fourth are high up on the canyon walls (and I couldn't get a keeper shot of the fourth), and the fifth is a short distance up a side canyon about where the route begins to climb to the rim.

All five arches except the first one are visible from various points along the rim portion of the route, from where it initially ascends and from the descent back to the canyon floor.

But it isn't all arches. As noted already, the canyon has a spectacular display of colorful walls, and impressive pinnacles as well:

Time to get out of the canyon-- if you are walking into what's shown below, you've gone too far and need to backtrack a bit. 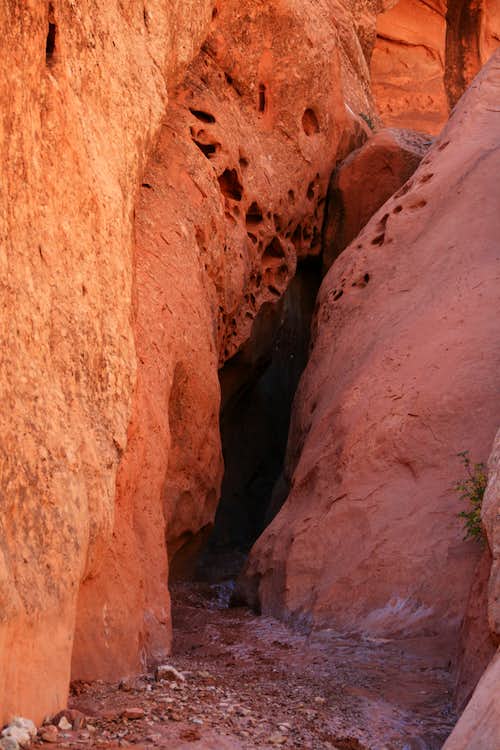 Up high-- There are great views back into and across Upper Muley twist Canyon, but the best are those to the east, where the Henry Mountains, the last major range in the Lower 48 to be mapped and still not terribly easy to access today, soar above the mesas and valleys of the Utah desert. It's almost a shame to drop back into the canyon after the air walk above. 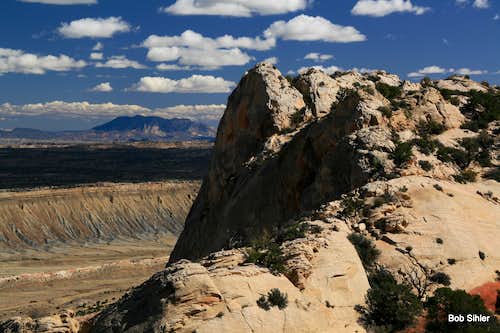 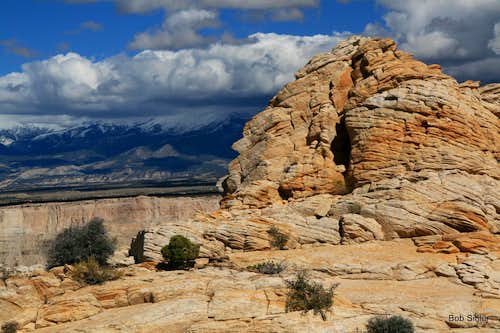