This is just a quick description September 7, 2013. It was the second day of an ambitious weekend outing. Sometimes pulling back on an ambitious day makes it even more enjoyable

VIDEO: (Best in 1080HD/Full Screen)
I didn't put much work into this. It's just a simple combination of the area from three areas along the bottom of the Amphitheater starting partway along the right-hand side. For those who don't know what the 'Amphi' is, it is a concave cliff band almost 200 feet high that's set on the southern flank of Basin Mountain. It's best seen from Haystack. 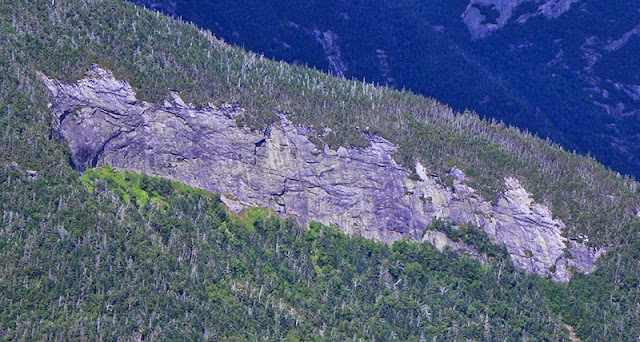 Close-up of the Amphitheater from partway up Haystack's Johanssen (East) Face.

The dawn came far too quickly after getting to bed at 1:00 a.m. The light pulled me out of a deep sleep, but I drifted back off until the alarm sounded at 7:30 a.m. Our climb of Marcy’s East Face and night exit over Haystack was tiring, but didn’t take the toll on my body that I originally feared; I expected my muscles to revolt as we emerged from our sleeping bags and got ready for day two of our little weekend adventure.

Taking our time, we began a slow walk from Slant Rock up Shorey’s Short Cut at 8:45. Our plan was to top-rope a couple routes at Basin’s Amphitheater, but neither of us had been there--even a visit was a triumph. Our collective strategy was to take the day one step at a time and decide what, if anything, we wanted pursue. A few people along the trail including MountainManJohn and crew (doing a Great Range Traverse) made the trek even more pleasant.

Our jump-off point (reached at 11:45 a.m.) from the Range Trail was at about 4,600 feet where it swings left toward the summit on the ridge. We decided to follow the approach suggested by the description in approach suggested by the description in Adirondack Rock. The woods were thick and provided a full body workout as we trekked true south down the ridge. It took about 45 minutes to reach the gentle split to left and right; in between and lower was the amphitheater.

ADK Rock provides a waypoint for the beginning of each route, so Anthony plugged that into his gps and we navigated toward a relative position just above on the cliff. As we got lower and the pitch steeper, the trees loosened and passage became more pleasant. I also noticed that the sun wasn’t as strong and upper level clouds were moving in.

The mountain got ever steeper until we hit some horribly dense krummholz beyond which was a void in the trees—the amphitheater. The spruce were growing on a slope greater than 45 degrees and it was difficult to see anything beyond as the terrain grew steeper. We took a quick glimpse down past the trees and then re-ascended into the more loosely knit forest: we were a few hundred feet off the utm coordinate. Once we got closer we could discuss our descent strategy.

Passage was easier above the krummholz (obviously) and the trend continued down the ridge again plunging into the band of dense trees. Anthony led and found no obvious signs (slings etc.) that we were above the points, but mother nature had a fair sway redirecting our itinerary. Lenticular clouds heralded rain. I wasn’t concerned about thunderstorms due to the forecast, but had no desire to be exposed on a slippery cliff. 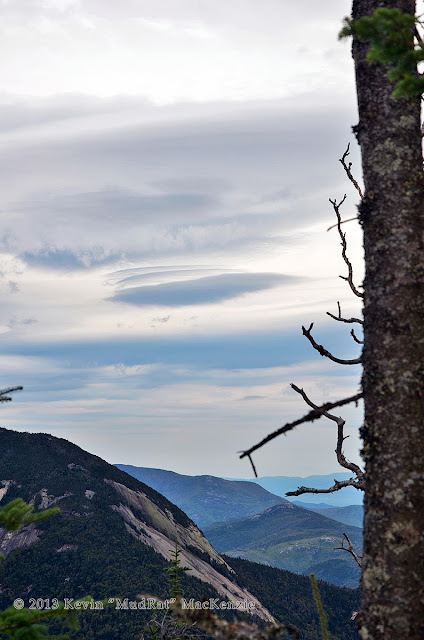 We spotted the new slide (post Irene) on the eastern margin of the Amphitheater from above and decided to find its top and perhaps rappel down then explore along the base of the cliff. A few minutes later, we found a splendid overlook of the Gothics’/Pyramid slabs while standing on some deadfall. The upper left corner of Basin’s East Face would have been a short bushwhack away.

We eventually found the top of the slide a few minutes down the ridge. Several steep portions broken by small platforms made up the primary slide below which was the runout; in all it’s not very long or impressive, but it is steep and provided a stellar perspective of the Amphitheater. 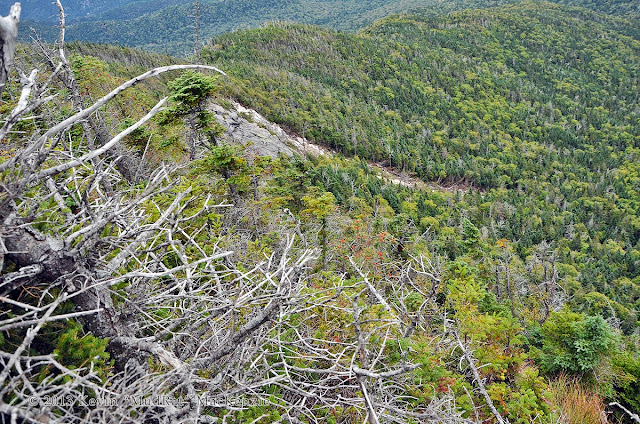 Looking over the top to the east at the slide. The krummholz in the picture guards the top for most of its length. 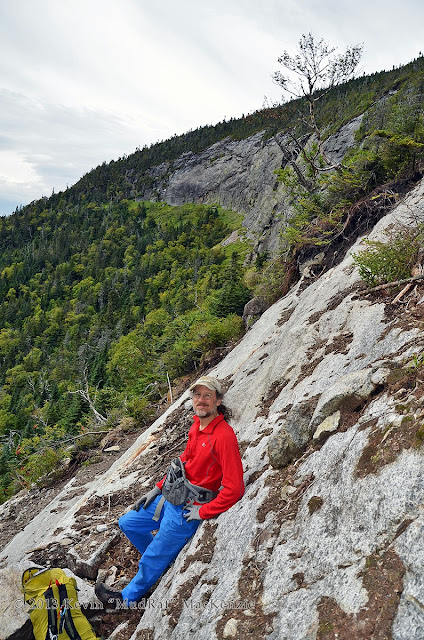 Kevin at the top of the slide on the east side.

We bushwhacked down along the slide rather than rappelling. Several ledges made this a challenge. One had a cool a fracture cave…a nice little nook if it down-poured (bad if there is lightning). The woods were still terribly dense as we exited onto the debris and crossed over to the base of the cliff and navigated toward the field of ferns growing between the anorthosite and forest. What a magnificent sight! It was everything I imagined in scale and beauty.

The wall itself was a marvel. An unparalleled view of Haystack’s Johanssen Face and all the peaks and ranges to the left sprawled before us. About halfway across we found a nice seat and ate a relaxed lunch. The character of the stone vacillated (that word’s in there for you Anthony) between flakes that seemed ready to fall off on the left to more stable stone on the right. Roofs, cracks, ramps and other features offered potential for climbing. 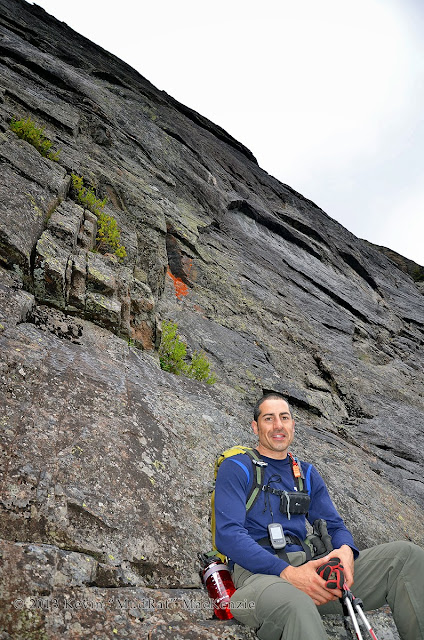 Orange lichen grew on the walls in some places. Together with the yellow goldenrod, ferns and purple harebell; the area was alive with color. The lack of direct sunlight flattened the depth of field and during lunch as it began to lightly rain. See the attached photos and video for further description… 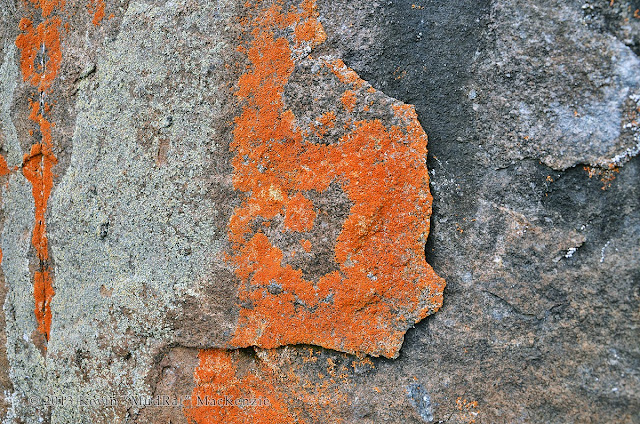 The rain got a little heavier as we exited the west side with a strategy to bushwhack along the same elevation while wrapping around the ridge and back to the trail. The challenge would be to weave amongst the various ledges. It was steep and challenging—a suitable exit for such a location. Soon enough we found the first exposed rock and opted to stay along the base yet move upward when we had a choice. This was to avoid what looked like a cliff below. Forty-five minutes later, we arrived at the Range Trail atop the open ledge overlooking Haystack. We’d come full circle.

A few short hours later we were back at Slant Rock for dinner and a longer night’s sleep before our Sunday exit back to the Garden. We didn’t get to actually climb the Amphitheater, but it was good beta for a return trip next year. Carrying the weight of the ropes etc. was just good conditioning! 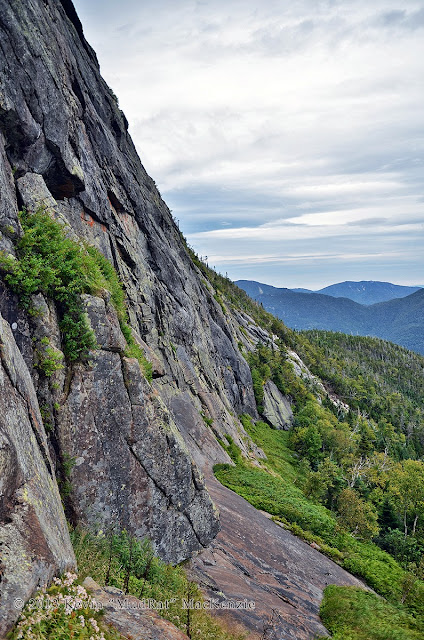 Relaxing near the halfway point of the walk across the base. 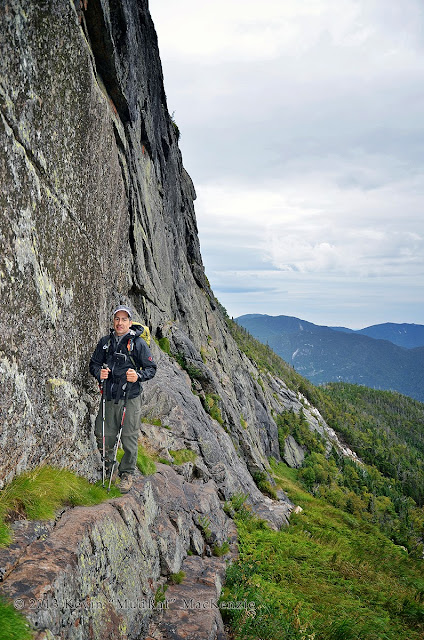 Approaching the western side.

any good bivy spots in there? I want to climb this!

Hissssss.
Bivying close was my original thought too. We were out for 2 days. The day before we climbed Marcy's East face (report on SP regarding that that too). We needed a place between the two and chose Slant Rock. Your closest 'site' would be Snobird site near Haystack Brook, but you could just find a spot below it with water nearby as well and be within an hour's 'whack I'd think.

keep hacking through the trees, you're opening up new routes