The direction of my interests this winter have taken me on a series of open faces for the most part. Each outing has filled my memory with indelible impressions to draw upon during the week; a respite when I need a mental break from the daily routine. Memories of frigid blasts of the air rushing up a mountainside, views down iced faces--the sound of crampons biting into ice. Thus far, the climbs have been in less than stellar conditions. This climb, however, found me under a deep blue sky and a bright sun that took the edge off the cold temperatures and gusty winds. Our quarry was another expansive face: Pyramid Peak’s South Face.
NP had been contemplating this for quite some time, gathering beta last summer.

Approach
Temperatures hovered around 10 degrees Fahrenheit when I left the house and would remain such throughout the day. Strong winds buffeted the house overnight, a concern since we were going to be exposed on a face. The winds were forecast to decrease as the day went on. The approach was via the Lake Road to Lower Ausable Lake and up the trail to the Sawteeth/Pyramid col. We climbed slowly, me nursing a pulled calf muscle and taking care not to make it worse. It took a bit over three hours to reach the Sawteeth/Pyramid col where the winds howled on the other side of the trees; the face was obviously being blasted. We stood in an area of relative calm, however, with the morning sun strong upon us as we ate a snack and enjoyed the warmth.

NP led the way and followed the trail up Pyramid just high enough to bypass the blowdown near the col. Perhaps two feet of snow covered the ground, but gravity helped as he broke trail down through the loosely knit conifer forest. It wasn’t long before I could see the snow on the eastern side of the face reflecting through the trees. We were close. Contouring down through the forest, we intercepted the slab about 150 feet above the lowest portion on a precipitous incline. It had taken a mere twenty minutes from the trail. Snow allowed us to climb to a stand of trees where we readied our gear. The western part of the slab dropped away below toward the runout in the southwestern corner. We stood at an even elevation with the East Face of Basin and the Johanssen Face of Haystack. A more perfect setting, I couldn’t imagine. It was noon so and the wind was still strong. Gusts forced us brace ourselves on several occasions and sent small cyclones of spindrift dancing across the face.

The slope was a bit over 35 degrees with a thin crust of ice and snow on the face. We couldn’t see a clean line to the top so we descended in search of better perspective. Kicking deep, I felt the crampons bite into ice where the snow was deeper. As I descended and traversed toward the low central slab, the snow thinned and I felt metal on stone; not a good thing. A nearby shelf of soil under the snow secured my stance as I looked upward, an inspiring and humbling view. A line of trees trended left (northwest) above. Beyond (about 500 feet higher) was the massive wall of the upper slab, perhaps 80 feet high. This also trended to the northwest. Scanning to the west, much of the face didn’t hold snow. The browns and greens of a long-exposed slide contrasted against the stark white. 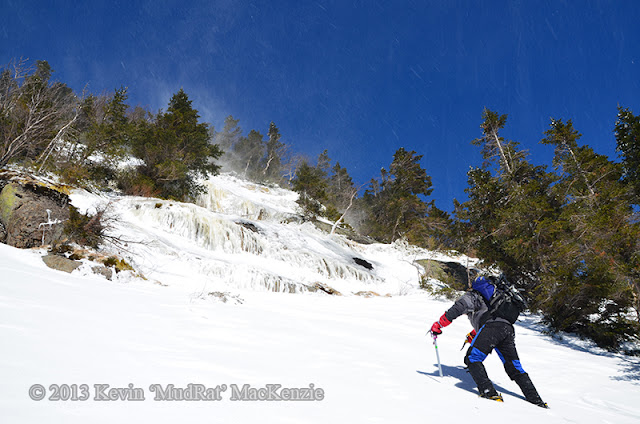 NP Nearing the first ledge set. We went out on the face to the left for the exposure.

It was time to ascend. Back at our packs I put on the GoPro video camera I borrowed and began to climb the learning curve of that little toy. In retrospect most of the footage looks like we were on a roller coaster, but that’s a different story. About 50 feet above our packs, a 3 foot ledge of ice broke the slab. It was on.

Above, we moved out onto the face as much as safety would allow and climbed in shin deep snow kicking steps through the thin crust to the underlying ice. A hundred feet up we found the first runs of good ice glistening in the sun. We weren’t roped, so the thick ice and good sticks were much to my relief. Switching leads occasionally, we took pictures of each other for scale in the ever-changing landscape. The face grew steeper as we neared the crux, a bulge in the face at around 3,900 feet in elevation or roughly 400 feet above the forest below. Meanwhile, views of Basin were astounding. A ridge had obscured some of its face below, but at this elevation it was nearly in full view…glistening under a cloudless sky. It too begged to be climbed. 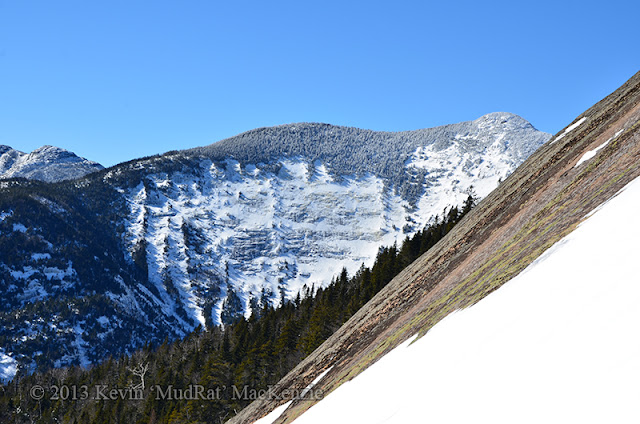 Basin's East Face. We're nearing the crux of the climb.

As usual, NP hooted every now and again with the joy of being free in the Adirondacks backcountry. As usual, he waited until I was in various precarious positions to yell, “Stay there and look back!” As usual, I complied and returned the favor in turn. Catching up to me just above the crux we sat in the snow and looked around. The slope declined slightly, but there was still a great deal of climbing to do. He trekked up another snowfield to more runs of ice about 500 feet above the base. Steep tiers of anorthosite at the top of the face didn’t hold the snow and loomed high above as worked his way upward. By now, he was even with the beginning of the northeastern slab wall, a most dramatic addition to the face and something I’ve been curious about for years. 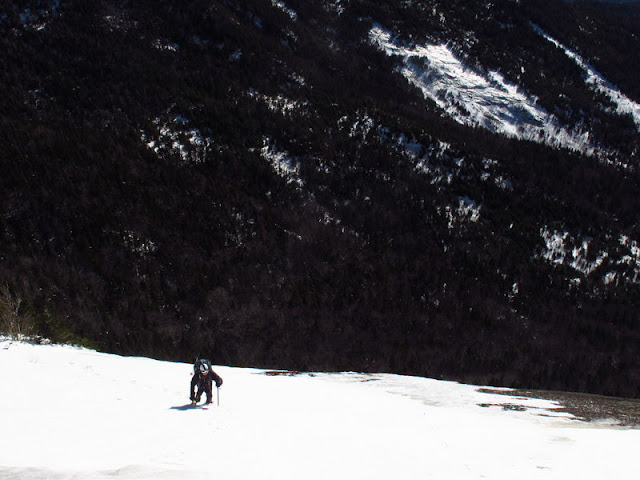 Kevin just above the crux. 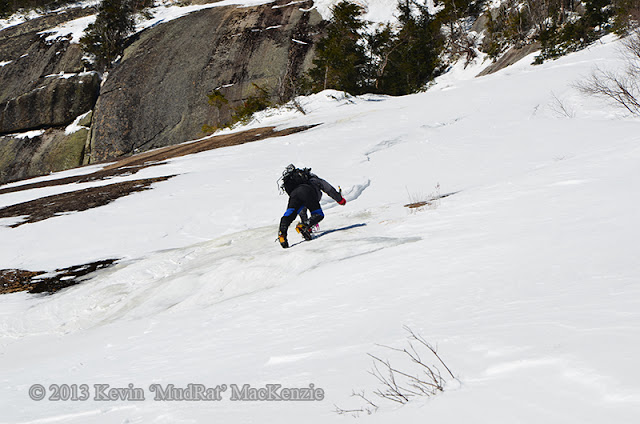 NP nearing the top of the main face. 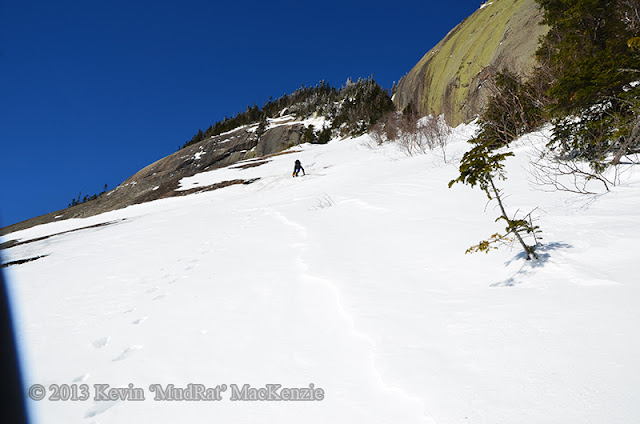 Wide angle for perspective, the 100' wall of the northeastern slab looms nearby.
I caught up to him in time to hear what sounded like a train barreling up the ridge. We braced ourselves as another (of many) gust blew swirls of snow around us and raked the face below. It was the last such gust we’d have to deal with.

Put yourself in our place and soak in the moment…you’re now about 500 or so feet above the forest below. To the southeast lies Sawteeth marred by slides facing Pyramid. Beyond lies Nippletop, Colvin, Blake and a plethora of surrounding mountains. The bottom of the face is obscured from view due to the bulge you just climbed. The pitch seemingly falls away into thin air drawing you forward if you let it. Imagine standing near a nearly vertical wall that’s 450 feet long ascending toward the awaiting ridge at a 35 degree angle. Paint the wall with hues of browns, greens and grays of every shade. Looking up along the wall to the northwest leads into the maw of a 20 foot wide gash in the ridge that narrows hundreds of feet higher. Now fill it with a few feet of snow. Add some small consolidated pieces of snow that bounce down from above on occasion. Your job is now to follow the wall up through a couple feet of snow to the crest of the ridge where a whole new world of fun begins…the bushwhack.

We soaked in the panorama and then began the slow trek up the gully. The snow was deepest in the center so we hugged the wall where it was only knee deep. Plunging the axes gave us some leverage as we leaned into the task. The work was hard, but the scenery was more than worth the effort. The mountain swallowed us as we ascended along smooth anorthosite on the right and layered ledges to the left. For over thirty minutes we climbed the trough which ended in a 10 foot wall entombed in ice. The tortured formations of melting ice sculpted by wind added the perfect winter touch. A break in the forest sat just beyond. The temperature was about 10 degrees, but the crest was sheltered, the sun was strong and our layers of fleece were warm. Stomping a comfortable hole in the snow, we lazed around for about 20 minutes discussing options: descend, head for Gothics south face or bushwhack Pyramid via the ridge. The time stood at about 2:45 p.m. 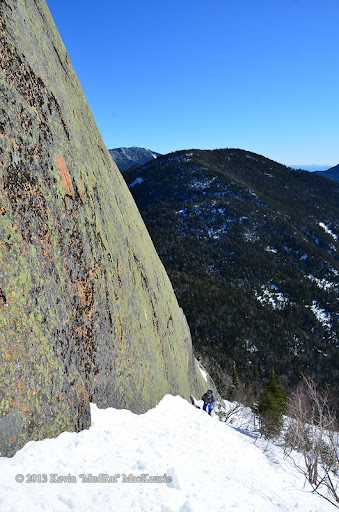 NP climbing adjacent to the wall.

We opted for the bushwhack, the most efficient option given the choices. The summit was a few hundred vertical feet higher and about 800 ground feet away through a sea of cripplebrush. The path was only about 450 feet away. Being a bit of a purest and realizing I’d likely not set out to do a winter bushwhack of Pyramid anytime soon, I led us on a summit-direct track. Snowshoes helped keep us from post-holing deeper than a couple feet, but were a big hindrance in the tight trees and up our first obstacle, a steep and thankfully short run of stone. The forest vacillated between the tall-stiff and short-dense-stiff varieties of spruce. In other words, there was no easy way through. The 800 feet took us just over an hour. We surveyed Gothics’ nearly bare South Face from Pyramid’s summit at 4:20 p.m., still buffeted by strong winds. I’d broken trail up the ridge which sapped the last of my reserves. It was time to call it a day, and a magnificent one at that.

Below, we reached the dam at the Ausable Lakes at about twilight for a snack and a break. The remaining 3.5 miles down the Lake Road was lit by the bright glow of a half moon. Headlamps were unnecessary and we arrived at our vehicles at 7:00 p.m., 11 hours from the start. I still feel like I’m on the face, and know that I’ll return to this ‘little’ Adirondack’ gem. NP at the end of the gully atop the ridge of Pyramid.

This looks awesome - another fine adventure from our MudRat in the Great White North (well, the New York State part...) =)

EastKing: Thank you very much!

Sarah: It was beautiful! ...or the Great White MudRat :)

I don't worry about the 'power' or votes. I do it 'cause I love to. Thanks so much, I appreciate the comment!