This is a great big bulk of a mountain that holds a picturesque location on the western shores of Loch Lomond. It is the northern most peak of the Arrochar Alps range and rises proudly above the small villages of Inveruglas, Ardvorlich and Ardlui. Access routes up onto the peak can be found in both Ardlui and Inveruglas, with the latter giving fine views of the Loch Sloy reservoir. The peak has a long ridge that runs roughly north to south, with the summit top and northern top both located along this ridge. Please note that the OS trig point is not the highest point, which is actually locted a further 200m north at the large cairn (943m). To the east of the summit a ridge juts out leading to a small group of outcrops, known as the Little Hills which can be ventured over onto and gives fine views down to Loch Lomond.

The translation of Ben Vorlich (pronouncation: byn-vorlich) is Hill of the Bay and not surprisingly there are quite a few peaks with this name in Scotland, as many peaks are found around the various lochs dotted around the country. Only two peaks with this name, however, are high enough to make it onto the Munros. This peak, next to Loch Lomond and the Ben Vorlich which lies next to Loch Earn.

The views on a clear day are excellent. To the south, Ben Lomond and Loch Lomond command your view. To the west the rest of the Cowal and Arrochar Alps are clearly seen, with the Paps of Jura and the Isle of Mull visible on the horizon and to the east and north the hills of Crianlarich and Tyndrum complete the 360 degree views.

Located on the western side of Ben Vorlich, on the Vorlich Fissures, high above Loch Sloy reservoir, is what is commonly known as a howff. This is a natural mountain refuge amongst the rocky outcrops and would provide good safety if the conditions took a turn for the worst.

Please note that if ascending from Inveruglas, car parking is discouraged at the start of the private road up Coiregrogain as it will block access. Parking should be done at the visitor centre opposite the power station. 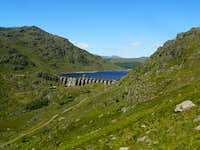 Loch Sloy reservoir on the approach from Inveruglas.(Photo by: Boydie) 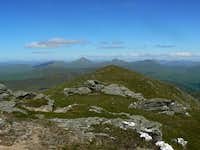 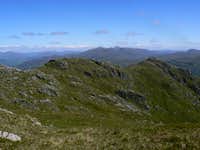 'Little Hills' on Vorlich.(Photo by: Boydie)

The best city in Scotland for Ben Vorlich is Glasgow, however access can be gained from a variety of locations. Ben Vorlich can be climbed from either Inveruglas or Ardlui, which both lie on the A82 road.

There are a variety of airports throughout Scotland that would provide easy access to Ben Vorlich. Below are a selection of the homepages for these airports; 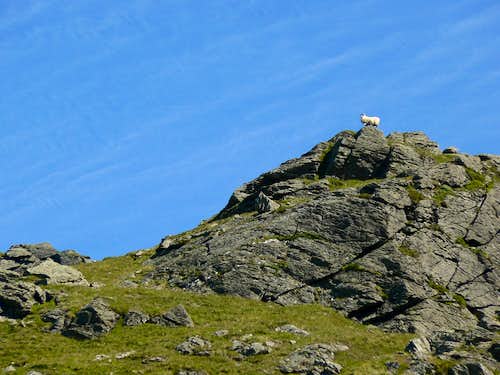 Sheep close to the edge of the summit ridge.(Photo by: Boydie)

Below is a list of possible accommodation venues that are located in the direct vacinity of Ben Vorlich.

Wild camping is totally legal in Scotland and can be done in various locations close to Ben Vorlich. This is due to the Land Reform (Scotland) Act 2003 that was mentioned earlier. 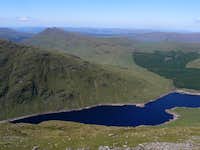 Loch Sloy from the summit.(Photo by: Boydie)) 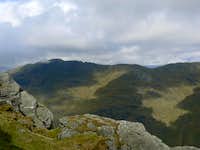 Vorlich from Ben Vane.(Photo by: Boydie) 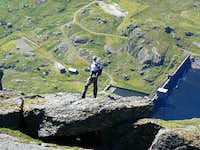 The following websites will provide invaluable information on the expected conditions for Ben Vorlich.