Beinn Ime (translation: Butter Hill) is located just north of the famous Arrochar summit of The Cobbler and is No.118 in the Scottish Munros table. Sitting at a height of 1011m/3317ft it is the highest of all the peaks in the Cowal & The Arrochar Alps District. There are two tops with the highest being the one at the northwest end of the summit ridge. This is clearly marked by the large circular cairn that provides excellent shelter in fouler weather. The east, west and northern sides of the mountain are fairly rugged, and for this, reason most ascents are done via the easier southern side that is broad and grassy.

As stated, Beinn Ime is best approched from Arrochar in the south, where most people usually do it in conjunction with either The Cobbler or Beinn Narnain or even both. It is possible to approach from the east at Inveruglas also, where a three peak circuit of Ben Vane, Ime and Beinn Narnain can be done.

The best city in Scotland for Beinn Ime is Glasgow, however access can be gained from a variety of locations. Beinn Ime is best climbed from Arrochar in the south, but can also be climbed from Glen Kinglass in the west.

There are a variety of airports throughout Scotland that would provide easy access to Beinn Ime. Below are a selection of the homepages for these airports;

Below is a list of possible accommodation venues that are located in the direct vacinity of Beinn Ime.

Wild camping is totally legal in Scotland and can be done in various locations close to Beinn Ime. This is due to the Land Reform (Scotland) Act 2003 that was mentioned earlier.

Beinn Ime is accessible all year round however, as you can get four seasons in one day in Scotland, care should be taken at all times. 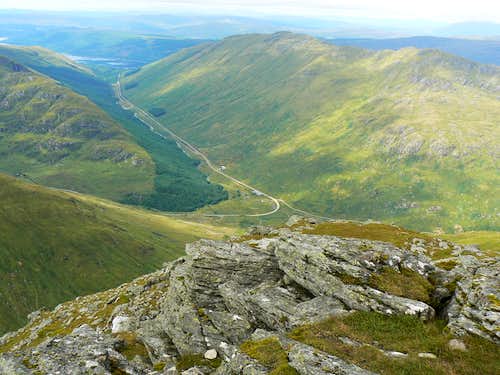