Beinn Narnain appears prominently from the shores of Loch Long in Arrochar and is marginally over shadowed (in noteriety) by its smaller neighbour The Cobbler.

It rises sharply from the head of Loch Long via its south east ridge rising over the knoll of Cruach nam Miseag to the rocky prow of The Spearhead and the little level plateau of its summit. Beinn Narnain's other principal ridge runs north east over Creag Tharsuinn to the peak of A'Chrois. One of the most striking features of this peak lies between it and the Cobbler. On the path, in the glen between both peaks, two large rocks that have fell from Beinn Narnain sit. These are the famous Narnain boulders. A timely reminder to keep a watchful eye around you at all times as getting crushed by a huge boulder is not on anyones list of things to do!!!

Beinn Narnain stands at a height of 926m/3038ft and is listed as Munro No.259. It's translation from Gaelic to English is Hill of the Notches and is pronounced as it is spelt.

The summit itself is very rocky and appears almost moon like. It commands fine vies all around with the views down Loch Long to the Kyles of Bute and across to Arran being the most beautiful.

The best city in Scotland for Beinn Narnain is Glasgow, however access can be gained from a variety of locations.

There are a variety of airports throughout Scotland that would provide easy access to Beinn Narnain. Below are a selection of the homepages for these airports;

From Edinburgh follow the M8 westbound direct to Glasgow.

From Glasgow take the A82 road via Loch Lomond until reaching Tarbet. For Arrochar and Glen Douglas continue straight on at Tarbet (this is the A83 road).

The following link can be used for gaining step by step car directions to Beinn Narnain from anywhere in the UK or for variations to the route(s) described above: AA Route Planner

Arrochar Alps panorama from the south. (Photo by Boydie)

Deer stalking takes place in Scotland between July and October. Information on this can be found at Hill Phones

When on the hills during these times walkers can help to avoid disturbing the deer by:

1. Checking with the estate or appropriate Hillphone service.
2. Find out about stalking activities before you go.
3. On the day, follow any advice on locally posted signs about preferred routes.
4. Keep to established tracks where they exist.
5. On the hill, keep to the ridges and avoid cutting through corries especially when descending as this will disturb the deer less. 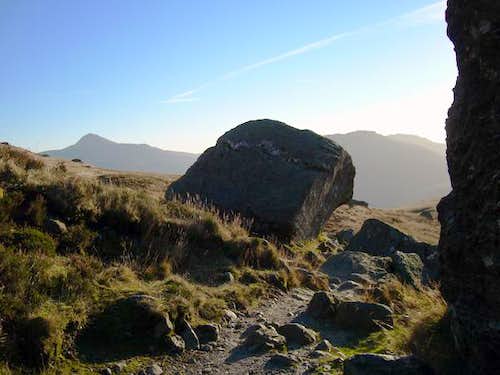 The Narnain Boulders. (Photo by: Daveyboy)

Below is a list of possible accommodation venues that are located in the direct vacinity of Beinn Narnain.

Wild camping is totally legal in Scotland and can be done in various locations close to Beinn Narnain. This is due to the Land Reform (Scotland) Act 2003 that was mentioned earlier.

Cowal & the Arrochar Alps are fully accessible throughout the entire year however, the weather conditions in the Grampians of Scotland can change rapidly and for that reason you should be fully prepared for all weather eventualities when on the mountains in this area.

The following link provides information on Beinn Narnain from an old Scottish television programme from the 90's called The Munro Show; 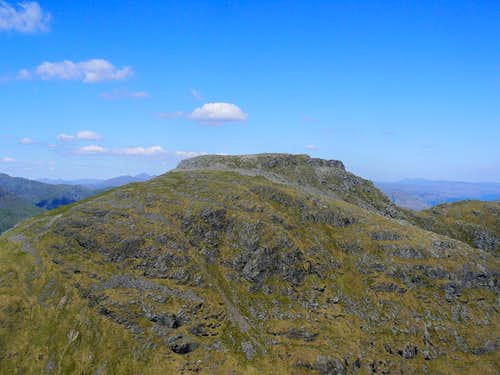