"Wright Mountain was not the right mountain and luckily we found that out before something serious happened." -Eastking

This trip was the same one as Not the Wright Mountain but I felt as though there were details of the trip that were left out. This trip took place December 26, 2009. The people who came were Gimpilator, fzte (Skyler), Gabe, Eastking, and I. 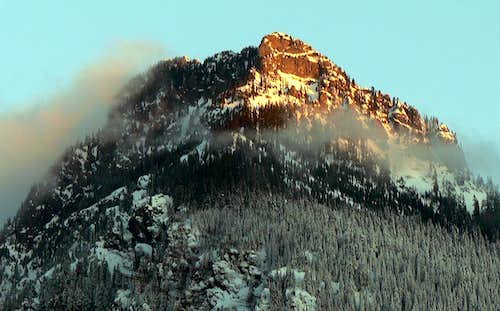 View on the Way to the Trailhead 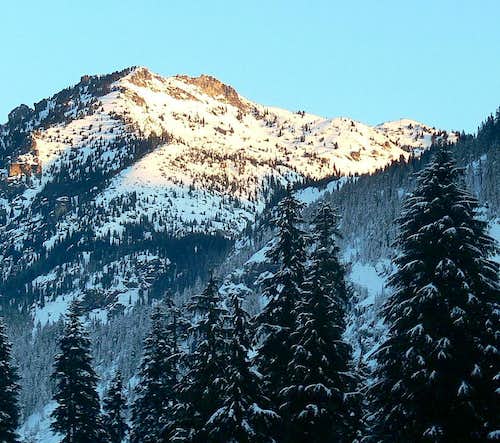 View from the Trailhead
Even on the way to Snoquamie Pass the sunrise was quite beautiful and we arrived just in time while the clouds were leaving the area. The trailhead started at the Alpental Ski Area. I believe this was Skylers third mountain trip, which he had already owned a pair of expedition boots that were for climbing Mount Everest, not even I as someone who goes to the mountains all the time have that kind of equipment.

Denny Mountain during the Morning 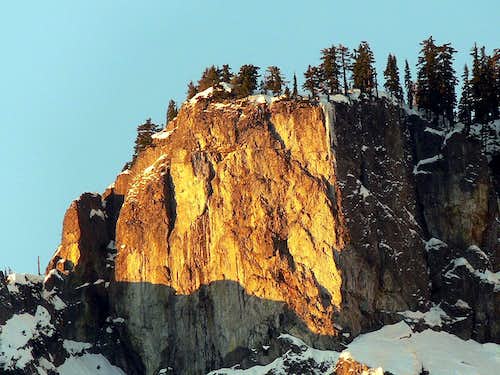 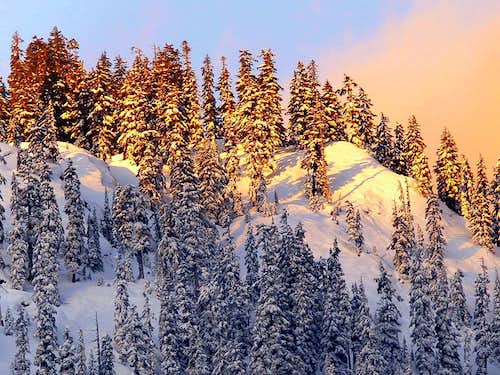 Sunrise on the Forest
We started the trail at a some what speedy pace. The views broke out very soon and Chair peak was towering over the valley with its sheer cliffs and you could tell that it was windy way above us. There was a few avalanche spots on the way to the pass, but we passed through them in speedy time. As we switched back up to the pass the wind started to pick up, at the pass the wind was blowing so hard that it looked as though it was snowing all around us even though the views were clear. The summits were blowing snow off of the summits which gave the place a mountainous feeling. I wanted to keep observing the view, but we had to head over to Wright Mountain. We carefully descended down to Snow lake, and took a right, going to the left would have been steep and much avalanche danger. I saw to my suprise a skier traveling on the edge of the lake, but I suppose the skis made him safer. 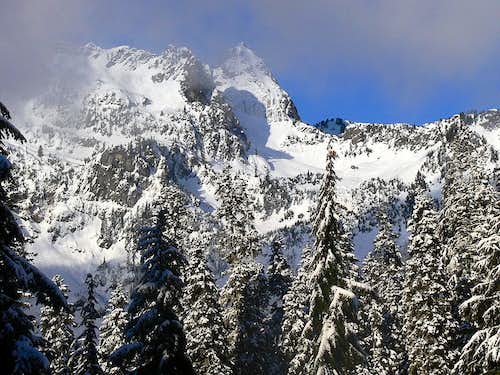 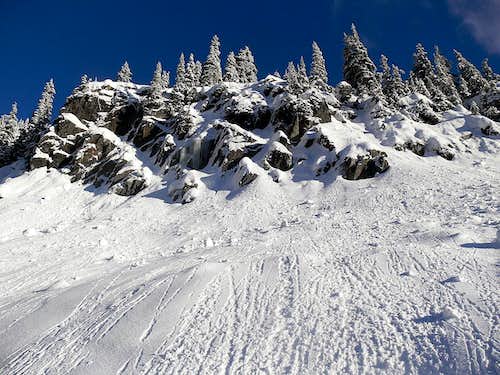 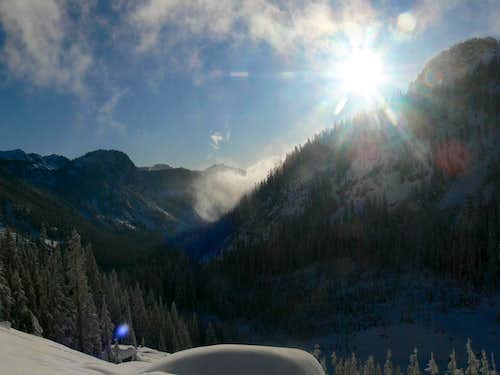 The Sun over Denny Peak 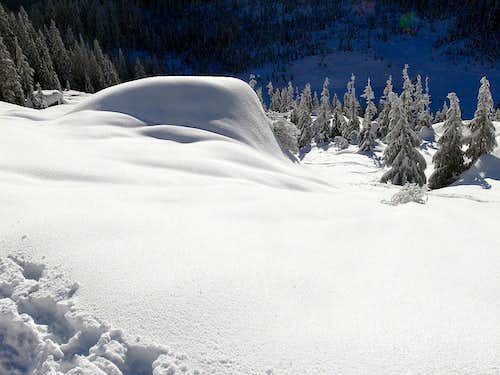 The Basin of Chair Peak
We passed through a non slopey area until we reached a large hill, we were unsure which way to take by this point. Eastking, Skyler, and Gabe went upwards while Gimpilator and I went the downwards route to figure out how to get to Wright Mountain. As we are heading down I realize how unstable the slope is, ice covered powder which not only increases avalanche danger but makes things not ideal for traversing. As Gimpilator was attempting to traverse the slope, he takes a step which creates a huge crack across the snow. Immediately he yells to me "JOSH GET OUT OF HERE!" and I go up the slope as fast as possible. When we get back to where we came from, Eastking had decided going up was also too dangerous so we met him near the bottom which was by the lake. We do a tactic we had not wanted to do. We would have to travel on the edge of the lake. At first I did not like the idea, but after a few steps things seemed stable, although then my comfort was over once I saw what looked like a small crevasse that you could not see the bottom of next to the edge of the lake, it was probably only 10 or so feet max, but still gave me a chilling feeling that made me want to stay away from those. The very edge seemed some what unstable, the slope seemed unstable, so we had to be about 5 feet out. Then we reached a spot were it looked do able for us to go on the slope, we all wanted to get off of the lake. The slope above had some melting noises that made me a little worried but we went across it without having any issues.

Next we had to go up a small hill which I went straight up because it seemed like the most fun way to go up. At the top I could see below the snow looked less stable, I took things with a little more cation by this point, as I was walking down I took a step and then "boom" the slope below me gives way and falls down in one big slab which one would call a mini avalanche. I nearly fell with it, but caught myself. We decided this was turn around time, we did not want to encounter any avalanches. From the top of the hill we had some snacks took some photos and headed back. 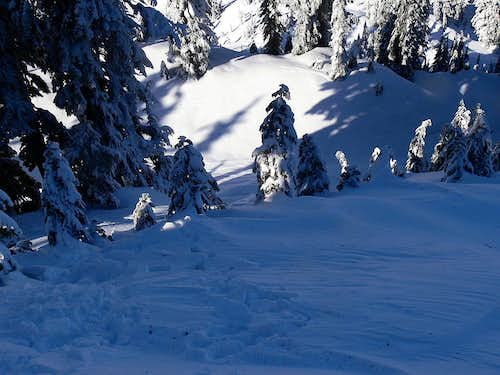 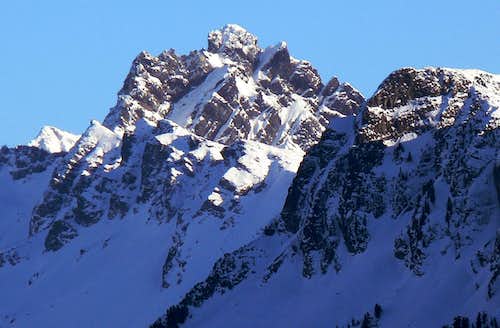 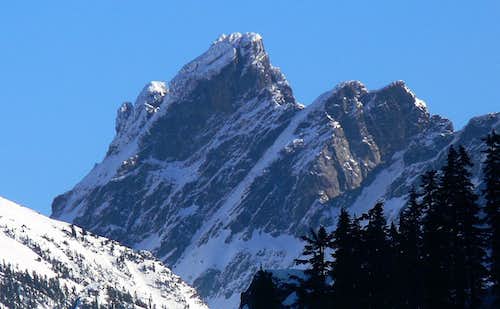 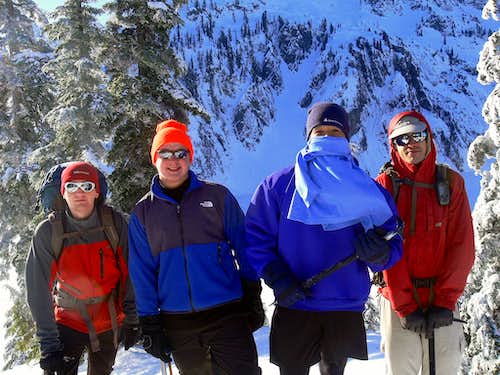 The Crew
Crossing back was more worry some than coming in, "I should have realized this would happen" I thought to myself as I look back at the questionable slope. It was now late day which is when avalanche danger is at its high point. Gimpilator decided to go first and had the idea that if we spread apart 100 or so feet between each person not only would it decrease the chances of an avalanche occurring (because it would be less weight on the snow slope) but also if there was an avalanche, the rest of us would be able to run in and rescue the other person. As we were going along the slope, once again it became too dangerous to walk on, so we had to walk back on the lake. Unfortunately I found out soon this did not feel any better, I was back on another peril. As I would take steps with carefulness, I would plunge into deep snow, which made me feel very uneasy. I did not want to get caught in an avalanche but at the same time I sure did not want to fall through the ice. After a few moments of fearful steps we reach the same shore. It was a relief. 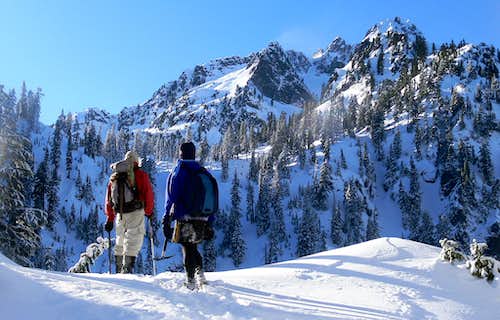 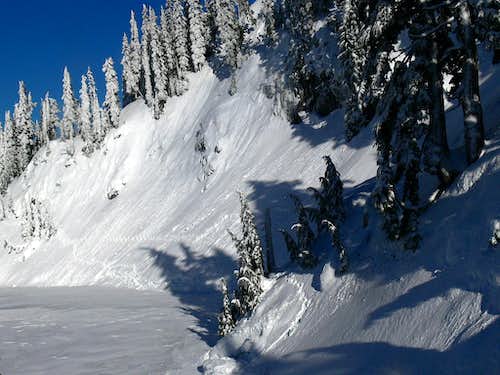 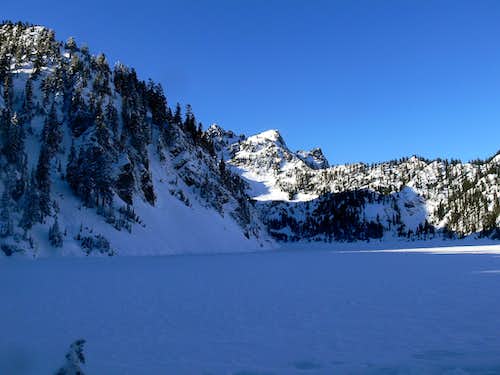 The Other Side of the Lake
Once again just because I knew I would make it back ok did not mean all my worries were over, now I had to deal with my numb feet. We went up the pass which was ok, but as time went on, I worried about frost bite or atleast forstnip. The sun was starting the set past the ridge, the group some what split up at one point as we glassaded down. Fortunately we were able to meet up and find the trail. Gabe by this point was able to run ahead and make it to the trailhead in speedy time. My feet finally got feeling in them, but each step was painful. The reasaon my feet got cold in the first place is that back in the day I did not have a good working pair of gaitors, so snow would get trapped in my boots, then would melt and get my feet wet, which would get worse. Soon we saw people on the trail which was now solid, it was funny to see people walking around in msr snowshoes even though it did them no good. 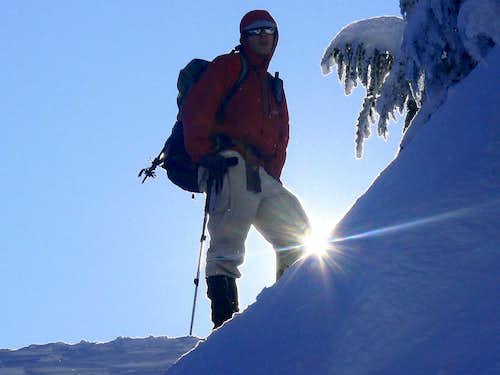 Snow Lake Panorama
Soon we got to the trailhead and were glad to make it down safe, I was glad to have my feet recover. I learned to be more catious of avalanche danger, and what to look out for. I hope to return back to this place when conditions are safer. It was a fun trip, but a little more than I expected, the next day I went snowboarding.

I remember that the NWAC prediction for avalanche danger this day was only a 2. But that's a good lesson that you can't always trust the prediction completely. Just the western facing slope around the lake were wind loaded and bad. Next time I see those kind of conditions I will make the decision to turn around even sooner.

You did great on this trip, great idea on staying a distance apart when heading back.