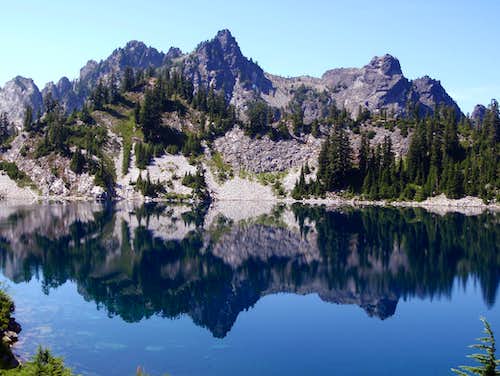 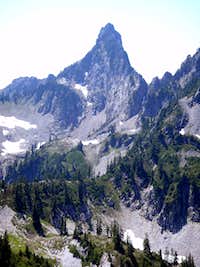 Wright Mountain is a great excuse to visit two stunningly beautiful alpine lakes (Snow and Gem) in a single day. The majority of the approach follows the popular Snow Lake trail with views of nearby Chair Peak commanding attention most of the way. Although, not one of the higher peaks accessible from Interstate 90, Wright Mountain is surrounded by a few relatively giant peaks. What Wright lacks in elevation is made up for in terms of scenery. The view of Kaleetan Peak from the summit of Wright is imposing, to say the least.

From this vantage point, it's hard to believe that there is a class 3 route on Kaleetan. From the summit, outstanding views of many Alpine Lakes Wilderness peaks take time to absorb. To name a few, many of which are listed on Summit Post: Preacher, Lundin, Snoqualmie, Chair, Kaleetan, Roosevelt, Preacher, Garfield, Treen, Price, Big Snow, Overcoat, Chimney Rock, and Lemah.

Starting at the Snow Lake trailhead hike northwest along a gradually ascending well defined trail. Passing through forest, brushy-slopes and the occasional talus field. After a mile an a half turn right at the fork (marked with a sign). Switchbacks lead up to the pass located between Chair Peak and Snoqualmie Mountain. From here if the weather is cooperating you should have your first good view of Snow Lake.

Losing 400 vertical feet in more switchbacks will take you near the edge of the lake. Follow the main trail past many camp sites as it contours the lake shore around to the north side. Here there is another fork and this time you should turn left (also marked with a sign) towards Gem Lake. There are several ups and downs during this part of the route but during late summer, wild blueberries might cheer you up. A mile and a half from the pass you will reach the base of Wright Mountain. The official trail leads all the way to Gem Lake and a well defined boot path on the north side of the lake leads from there up the east slope to the summit. There are several talus crossings above Gem Lake but they are marked with many cairns and if you have been on talus before you will find that they are not challenging. 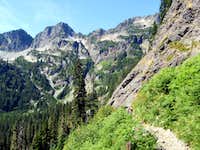 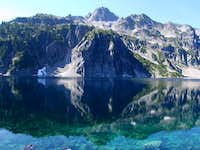 Coming east or west, follow I-90 to Snoqualmie Pass. Take exit 52 (West Summit). and if necessary, cross to the north side of the freeway. Skip the first road on the right (which heads to the PCT parking lot). Take the second right and drive up past ski chalets till you get to the Alpental parking lot (about 2 miles from I-90). If you end up cruising through some Swiss looking neighborhoods with vacation homes, you’ll know you took a wrong turn somewhere. Snow Lakes trailhead is there and easily visible on the eastern side of the large parking lot. 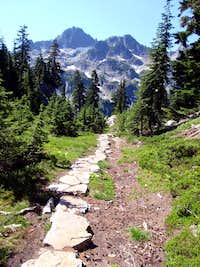 Camping is welcome in the upper lake basin and many regularly used spots are available. Campfires are not allowed in the lake basins.