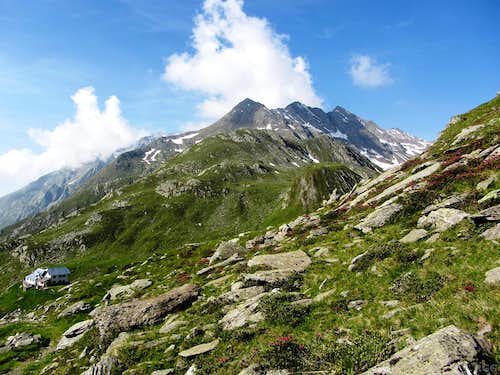 The Blasiuszeiger towering over the Lodnerhütte. It's the leftmost one of the three high peaks. 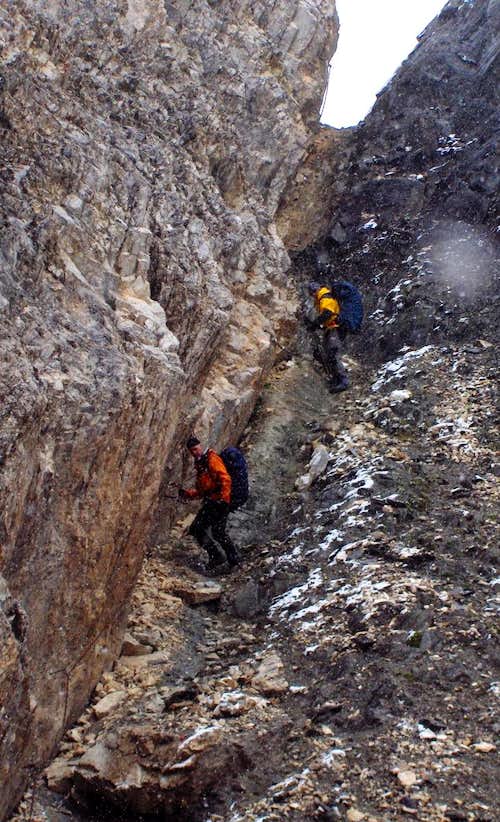 The first year that I visited the Texel Group, I was on a trip with the Dutch alpine club. The schedule had been well thought out, and after a very long day traversing Similaun, a short day followed, to recover a bit. But when we arrived at the Lodnerhütte early afternoon, I wasn't tired yet.

Right next to the hut was a mountain that looked inviting. The map showed a trail to the top, and it was 'only' some 600 m higher. I was keen to have a go at it, and so I asked if anybody else was interested, but the others were content to have an easy afternoon. And so I headed out on my own. 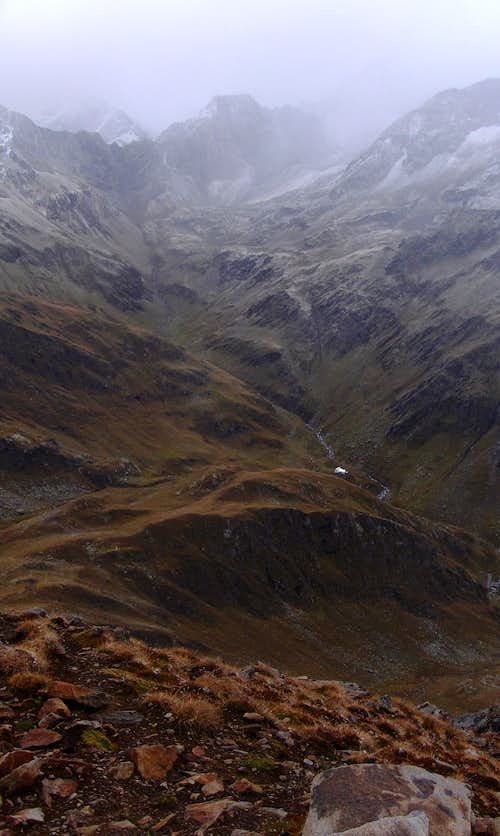 Summit view to the north, as the front arrives. The tiny white dot is the Lodnerhütte. 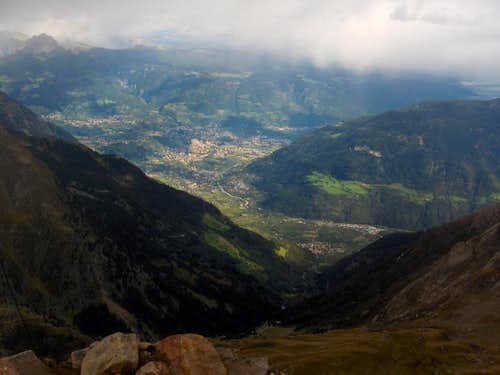 Meran still looks sunny and inviting
It was early September. As it happened, a huge bad weather system was sweeping over the Alps from the north, bringing an unseasonally early big load of snow and arctic conditions high up in the mountains. The northern parts of the range received the biggest dump, as much as two meters of fresh power! Located much further south, the Texel Group wouldn't see anywhere near those amounts, but it was still enough that the associated avalanche risk would force us to throw our schedule out the window.

But at the Lodnerhütte, we didn't know that just yet. Earlier today we had seen the first signs, when there was a bit of snow on the trail over the Johannesschartl. It wasn't anything serious, but in an effort to beat the possible arrival of more seriously bad weather, as well as making sure to be back in time for dinner, I hiked up at a brisk pace.

By the time I reached the summit, I enjoyed rather contrasting views. To the southeast lay the city of Meran, more than 2 km below. It was still basking in sunshine, and the green valley looked inviting. But up on the summit itself it was gloomy, the thermometer showed -3 °C and the views to the north were very different. I didn't stay long. By the time I was back at the refuge, it had started snowing. 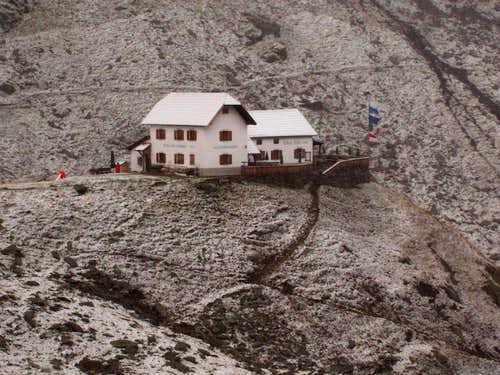 Years later, I was back at the Lodnerhütte. This time I was alone, with a full day ahead of me. My plan was to climb the Zielspitze and then make the long way down to the Vinschgau valley. And since the trail from the Lodnerhütte to the Zielspitze traverses the slopes of the Blasiuszeiger, passing not all that far below the summit, I decided to have another look.

Alas, once more the weather did not cooperate. It was nothing serious this time, but the cloud base dropped down to hide the higher peaks of the range, including the summit of the Zielspitze. Still, at least I got up the Blasiuszeiger again, and below the clouds the weather was fine. 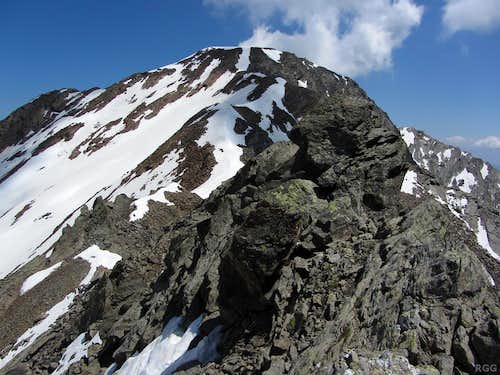 Gfallwand
The southwestern part of the Texel Group is home to a complex cluster of peaks. The jagged ridges between them offer some fine scrambling and mountaineering routes as well as scenic photo opportunities. The highest one, and the only one with a respectable prominence, is the Gfallwand (3175m). But quite a few other peaks on the many ridges have a name and often even a summit cross. One such peak is the Blasiuszeiger. It is the northernmost one on the impressive Hühnerjochkamm, a long, beautiful ridge stretching some two kilometers to the northeast from the Gfallwand (3175m).

As it isn't one of the highest summits in the Texel Group, the views in most directions are not very far. The one big exception is towards the southeast, and that view alone is worth getting up there if visibility is good: With nothing blocking the way to the southeast, you can look down on Meran, and to the mountains far, far beyond. 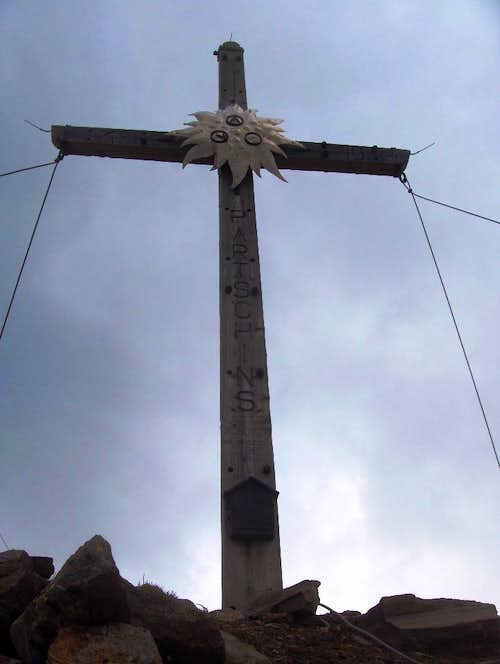 The big summit cross
There is a big summit cross on top. Back in 2007, there was a thermometer on it, but five years later I didn't see it anymore.
The green paddle points at the Blasiuszeiger. The terrain view clearly shows the Hühnerjochkamm, the 2 km ridge towards the SW, from Blasiuszeiger to Grallwand.Click here to view a larger map

The Blasiuszeiger lies in Süd-Tirol, a relatively autonomous region in Italy these days. The main language is German. In the past that was different: German was suppressed, and all geographical features received Italian names. In Italian, the mountain is called Monte di Biagio.


Getting to the area

The nearest city is Meran, a pleasant place southeast of the Texel Group. Well shielded by the Alps from bad weather coming in from the north, it has a very nice climate. In summer, the area attracts a lot of visitors and for a small city it is well connected.

Partschins, just west of Meran, is the nearest village to the Blasiuszeiger and therefore the most obvious starting point.

Meran has regular train connections with Bozen / Bolzano, which is well connected to the rest of the Italian rail network as well as to Austria and Germany to the north. In addition, a regional train heads up the Vinschgau valley, west of Meran, as far as the small village of Mals. The station nearest to Partschins is Rabland. Alternatively, buses go from Meran up the Vinschgau valley, stopping at Partschins. 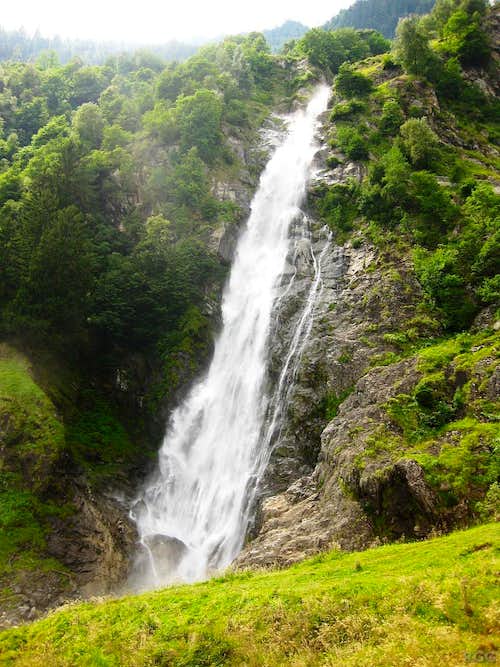 The Lodnerhütte lies in the center of the Texel Group, directly northwest of the the Blasiuszeiger, where the Lafaistal joins the Zieltal. Of the many ways to get there, the shortest one is from the south, hiking up the Zieltal. From the Birkenwald car park (980m), still fairly low in the Zieltal above the village of Partschins, it's about 4 hours to the refuge. Early on you'll pass by the impressive Partschinser Falls.

Alternatively, to save an hour and some energy, you can start by taking the Texelbahn cable car from Partschins up to the Giggelberg (1535m) and hike north on the Meraner Höhenweg to the Nassereithhütte (1523m) and from there up the Zieltal to the Lodnerhütte.

Normal route from the Lodnerhütte

A steep hiking trail, clearly signposted and normally well maintained, leads all the way up. The slopes are loose though, and prone to erosion. When I visited in 2012, shortly after a whole lot of rain, the trail had suffered. 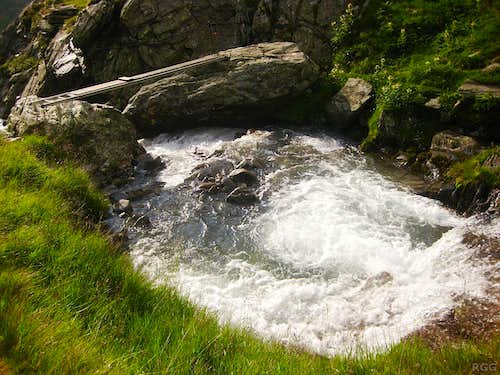 A small foot bridge over the wild Lafaisbach
From the refuge, the trail starts out to the west, towards the Lafaistal. Very soon it reaches the banks of a mountain stream, the Lafaisbach. A small wooden bridge leads across the fast flowing water. After that, the trail turns south. 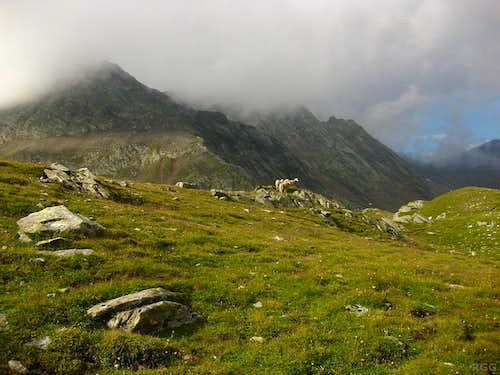 A few sheep grazing on the grassy slopes
Zig zagging up the grassy slopes, the trail quickly gains altitude. Eventually the grass disappears and the slopes get more rugged. At a shoulder with a rather inconspicuous trail junction, the main trail turns right. From there, it's not far to the summit anymore.

Count on 1.5 to 2 hours from the refuge to the summit and 1 hour for the descent. 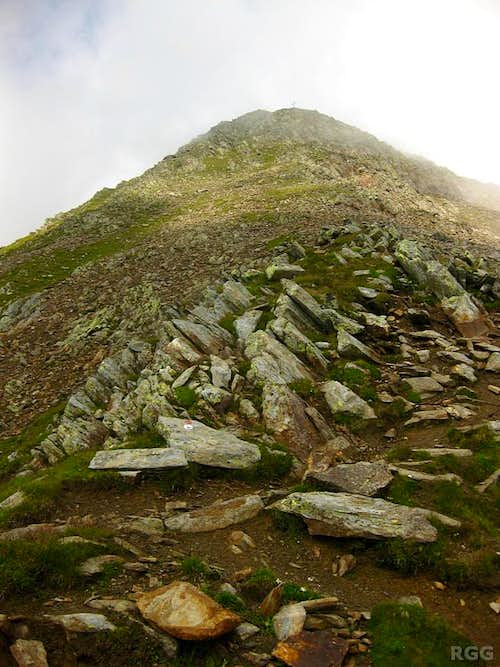 Judging by the state of the trail, where there is one that is, this route isn't used much. However, when not starting at the Lodnerhütte but down in the Vinschgau valley, this is a good alternative, albeit a more strenous one, with the added advantage that you'll find yourself in a very quiet part of the Texel Group. No scrambling is required, this is still a hiking route. 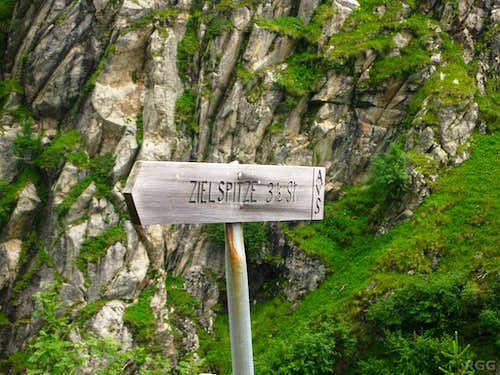 The turn off to the Zielspitze 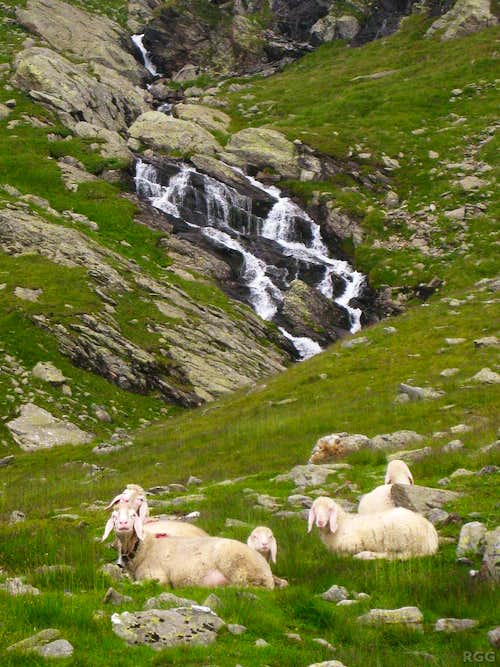 Sheep near the former Königshof
After initially coming up the Zieltal, the same way as if going to the Lodnerhütte, turn left at around 1900m on trail nr 3. There is a sign pointing to the Zielspitze but the Blasiuszeiger isn't mentioned. Sections of the trail are steep and difficult. Eventually it gets easier as it leads to a wide, relatively flat area with the remains of the Königshof (±2350m).

You're getting close now, and it's much shorter to leave the trail to the Zielspitze and head straight up the grassy slopes of the Blasiuszeiger to the northwest. Aim for a high shoulder slightly to the right of the summit. Before getting there, you may very well find the trail (nr 3A this time) again, but if you don't, on the shoulder you can turn left and follow the normal route. 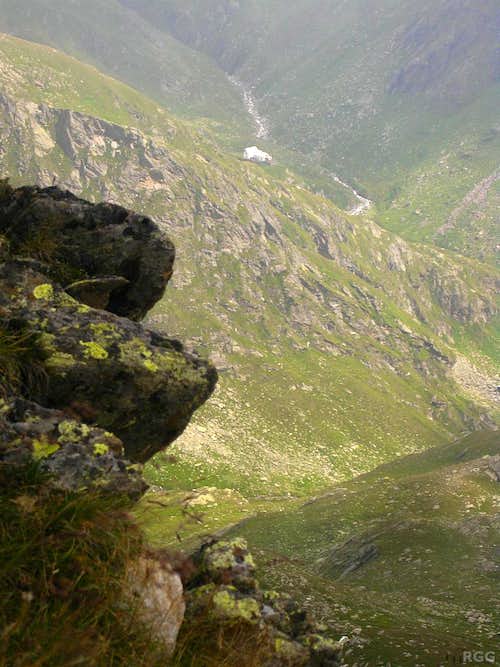 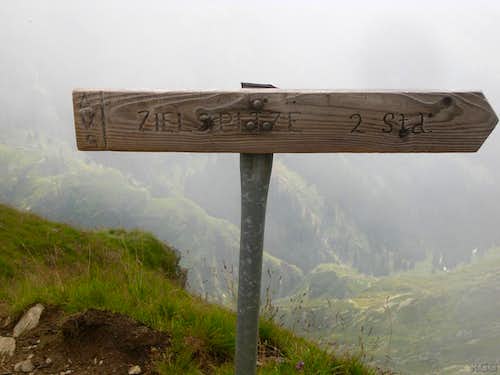 Route sign at the junction on the Blasiuszeiger shoulder, pointing to the Zielspitze. When descending towards the Königshof, start by following this trail, which traverses the southern slopes of the Blasiuszeiger. As soon as the slopes are not too steep anymore, leave the trail and head south to the green valley below. Near the Königshof you shouldn't have any trouble picking up the trail (nr 3) again; rocks with characteristic white and red paint marks show the way. 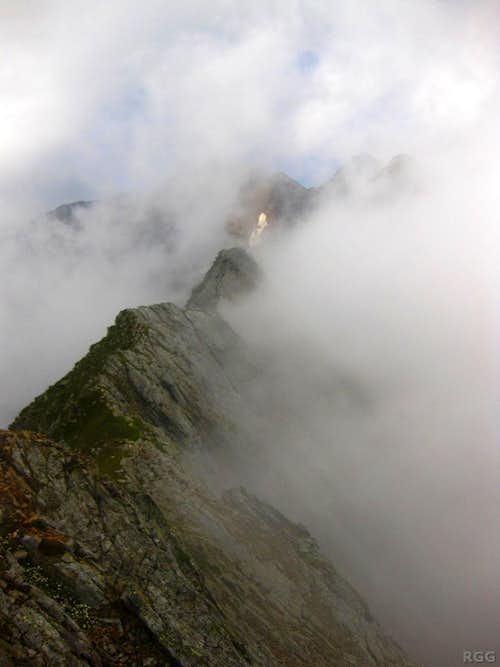 From the Gfallwand (3175m) the Hühnerjochkamm stretches 2 kilometers to the northeast with the Blasiuszeiger marking the end. Although it looked inviting, I haven't traversed this ridge (yet). According to the guidebook, it's UIAA grade III.

See also the panoramic image of the ridge at the top of this page. 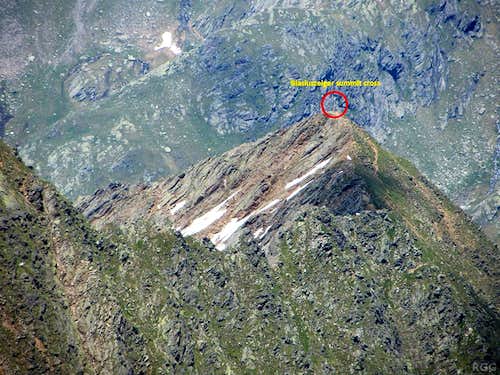 Zooming in on the Blasiuszeiger summit from the Gfallwand. Only a short part of the Hühnerjochkamm is visible

The best period is from late spring to early fall.

In wet conditions, the Königshof route is not a very good idea because the steep grassy slopes high up on the Blasiuszeiger can be slippery and dangerous.

The nearest refuge is the Lodnerhütte.

Meran and the many nearby villages offer countless accommodation options. 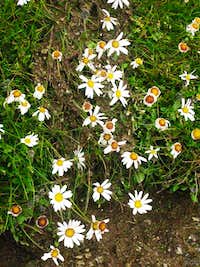 Flowers on the  summit
The Texel Group is a Natural Park, and is protected as such.