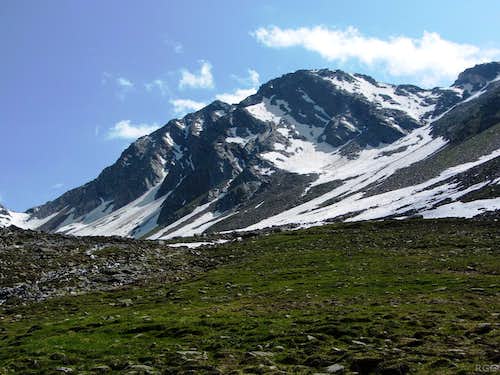 The Lazinser Rötelspitze from the north. Although the round summit just right of center looks higher, the true summit is the one just left of center.The normal route follows the ridge from the saddle on the left.
Judged by prominence alone, the Lazinser Rötelspitze is a minor summit. Nevertheless it's a relatively popular viewpoint, with more visitors than its higher parent, the Lodner. The normal route to the summit, by the SE ridge, requires some scrambling, but it's just within reach of experienced hikers. The steepest sections have steel chains and cables for protection. On a clear day, your reward will be excellent views of nearby and distant peaks, including the famous Ortler, and you can look down on the city of Meran, 2700 m lower in the valley.

In addition to the SE ridge, there is a second ridge, to the NNW. Eventually this leads to the base of the very steep south ridge of the Lodner (3228m). In contrast, on the side of Lazinser Rötelspitze the gradient is very easy. The maps I checked don't give an elevation for the key saddle (location 46.727°N / 11.046°E), but the contours put it between 2950 and 2975 m, which gives the Lazinser Rötelspitze a prominence of between 62 and 87 m. 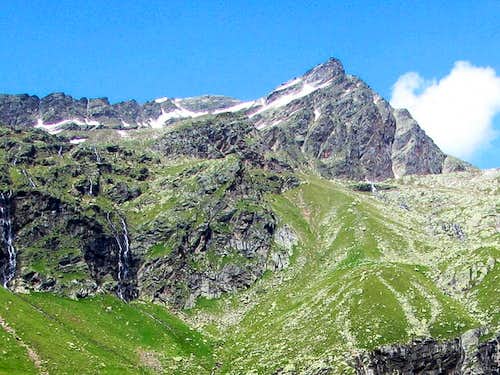 Lazinser Rötelspitze from the southwest, clearly showing the two ridges
The slopes of the mountain are quite varied. The south side is rocky and steep. This is climbers territory. The west side is complex, with scree high up, a few rocky ribs and grassy slopes further down. There is no trail, but it's not too difficult for experienced hikers, unless you get lost and find yourself blocked by one of the ribs. The eastern to northern sides are steeper again, with more scree and a couple of complex rock buttresses.


Click here to view a larger map
Right below the peak, on the south side, are a couple of small but pretty alpine lakes: the Tablander Lacken. 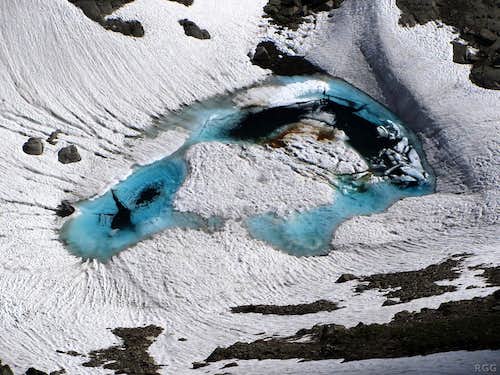 Looking down on the smaller one of the Tablander Lacken

North of the mountain, at the head of the Pfelderer valley lies the Lazinser alm. The Lazinser valley stretches south from there.
There are a lot of name variations for this peak. It's also called the Partschinser Rötelspitze, named after the village of Partschins in the south. Sometimes it's even simply called the Rötelspitze. And finally, the 'e' at the end is sometimes omitted.

The Lazinser Rötelspitze lies in Süd-Tirol, a relatively autonomous region in Italy these days. The main language is German. In earlier days, that was different: German was suppressed, and all geographical features received Italian names. In Italian, the mountain is called Cima Rosa.

Confusingly, the Spronser Rötelspitze (2625m), a little further east in the Texel Group, is also called Cima Rosa in Italian.

The summit itself is small, but not really exposed. A large steel cross marks the spot. 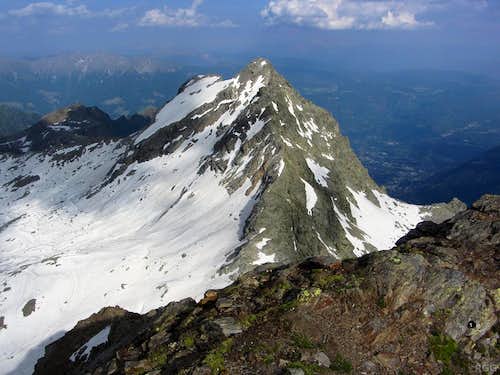 A fine view of close neighbor Tschigat from the Lazinser Rötelspitze.The moist air makes it hard to see clearly, but Meran is on the right.

The nearest city is Meran / Merano, a pleasant place southeast of the Texel Group. In summer, the area attracts a lot of visitors and for a small city it is well connected.

Meran has regular train connections with Bozen / Bolzano, which in turn is well connected to the rest of the Italian rail network as well as to Austria and Germany to the north. In addition, a regional train heads up the Vinschgau valley, west of Meran, as far as the small village of Mals. 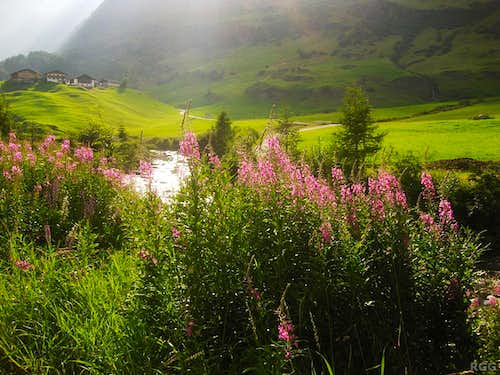 Zeppichl seen seen from just outside of PFelders

The trailhead nearest to the mountain is deep in the Pfelderer valley, to the northeast. This is a side valley of the Passeier valley north of Meran. Public access to the road into the valley ends at the hamlet of Zeppichl (1676m), but the bus service only goes as far as Pfelders (1628m). There is ample parking space at the beginning of Pfelders. Alternateively, if you spend the night at one of the few accommodations at Zeppichl, you can of leave your car there, saving you a 15 minute walk.

A longer, alternative approach is possible from the south, hiking up the Zieltal valley from the village of Partchins. You can drive partway up the Zieltal valley to shorten the approach. There is a large parking lot at around 980m, at Birkenwald along the Wasserfallweg (46.692°N / 11.054°E). It's still more than 2000m up from there. Or you can save some energy and take the Texelbahn cable car up from Partschins to the Giggelberg (1544m) and start hiking from there.

The normal route follows the southeast ridge from the Halsljoch saddle (2808m). The ridge is a mix of steep hiking with some scrambling sections (UIAA grade I). There are steel chains and cables to secure the more exposed parts, and occasional paint marks to help point out the easiest route where the best way might be less obvious. But even without the marks, getting lost would be practically impossible. It takes less than an hour to hike and scramble up the ridge. But first you have to get to the Halsljoch, and that takes much longer. 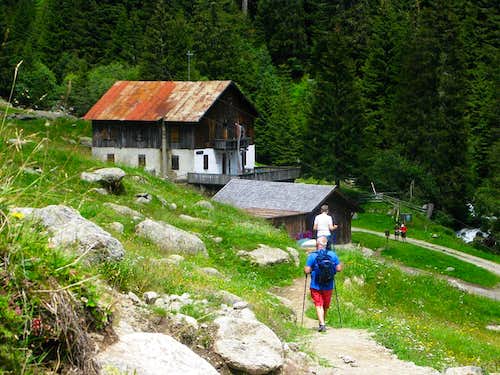 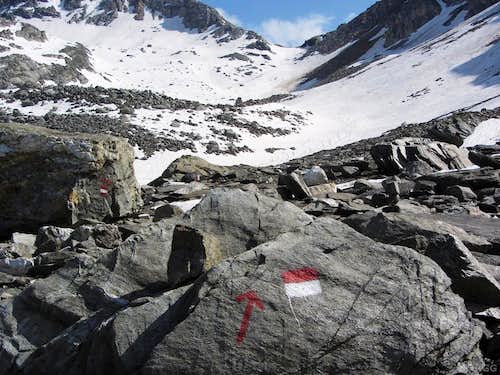 Approaching the Halsljoch from the north

From Pfelders it's a 4 hour hike along a marked trail. First head up the Pfelderer valley along the Meraner Höhenweg. The Lazinser Alm (1858m) at the head of the valley is the last place where you can enjoy refreshments. After that, a wide steep trail heads up towards the Strettiner Hütte and Eisjochl. But well before that, after gaining some 300m, you reach a junction  (46.7695°N / 11.0525°E) where you have to turn left, due south. The trail is smaller now, and much less steep. This trail up the Andelsboden takes you all the way to the Halsljoch.

From the Texelbahn cable car summit station it takes 5 to 6 hours, from Birkenwald add half an hour to an hour. In both cases the route passes by the Nassereithhütte (1523m) and the Lodnerhütte, where you can spend the night if you don't want to make it a very long day. From the Lodnerhütte to the Halsljoch takes the better part of 2 hours, back down an hour and a half. 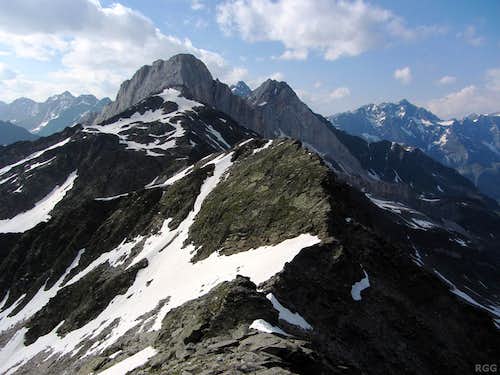 Summit view towards the Lodner, along the NNE ridge. On my descent, I left the ridge shortly before the snow field and followed it down. Under the snow lies scree.
I didn't try it, but the ridge connecting Lodner and Lazinser Rötlspitze can be traversed. The crux will be the steep S ridge of the Lodner itself, which is UIAA grade II, with difficult route finding and sometimes loose rock. Near the Lazinser Rötelspitze, the ridge is much easier. On my descent, I followed the ridge for a very short while. I used my hands, but it was easier than UIAA grade I.

I'll describe this as a descent route, for this is how I came down the mountain. 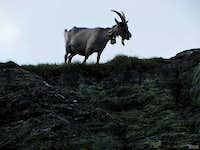 A goat on the western slopes
Directly west of the summit the terrain is steep. However, after descending the NNE ridge for no more than a few minutes it gets easier and you can leave the ridge on the left wherever you like. Just don't follow the ridge for more than 200m, and definitely don't start heading up again.

Once safely off the ridge, you won't need your hands anymore. There is no trail and there are no markers or cairns, but if visibility is good, finding a way down is easy. Don't expect a trail, just go where the terrain is easiest, and keep heading in a generally western direction. If you venture too far left, you'll find yourself above steep cliffs, and too far to the right you'll find your way blocked by rocky spurs.
Eventually you'll spot the clear hiking trail that connects the Lodnerhütte to the Halsljoch, and you can easily get back on it at around 2500m or so, a little more than one kilometer west of the summit (46.721°N / 11.033°E).

Frankly, I don't think this would be a pleasant ascent route. With snow on the slopes it's cumbersome, without it the higher parts of the slopes are scree which is no fun either. But on the descent it was fine, and sliding down the snow was fast. 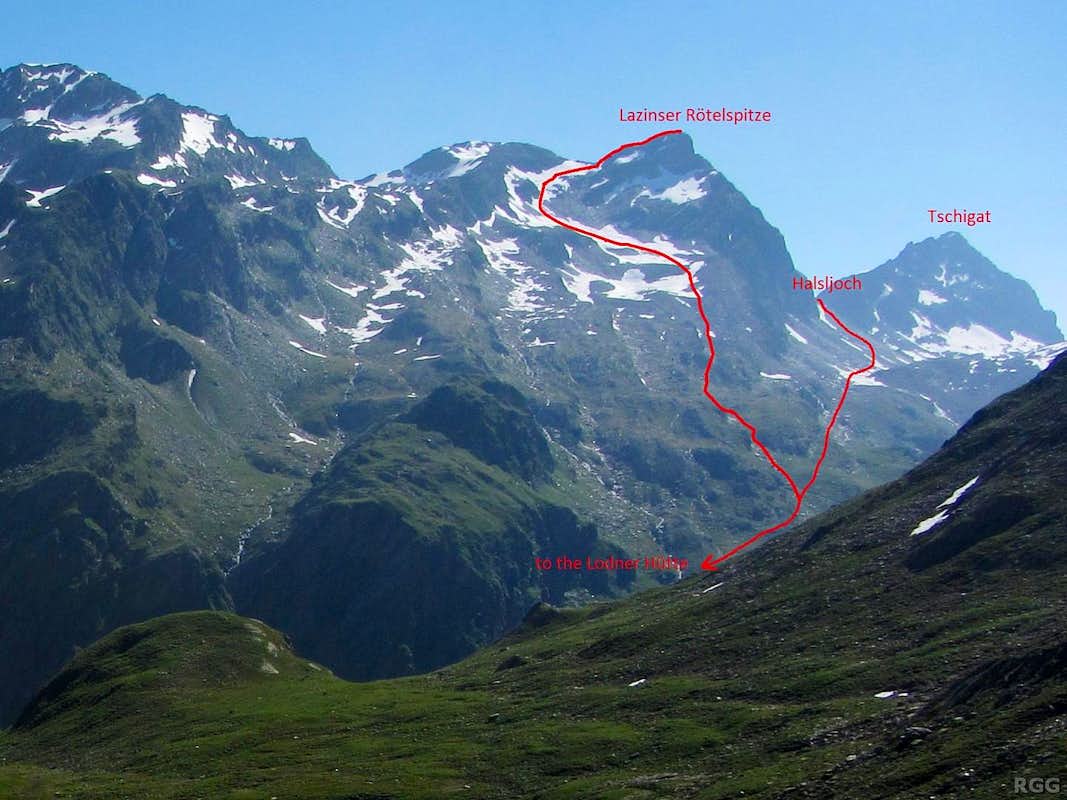 The trail to the Halsljoch as well as the descent route down the western slopes. The Lodnerhütte hidden from view behind the grassy knob on the left.

The area has many interesting scrambling peaks, and if you have more than just a day, it's easy to visit several of them.

An interesting two day trip would be to start in Pfelders, hike up to the Spronser lakes, then traverse Tschigat from east to west (UIAA grade II). That brings you to the Halsljoch. From there you can choose between the Lodnerhütte or the nearby Guido Lammer bivouac to spend the night. The next day you can climb the Lazinser Rötelspitze and head back to Pfelders.

If you start early enough and have the energy for it, you can climb the Lazinser Rötelspitze on the first day as well, and then on the second day return to Pfelders via the Johannisscharte and Eisjochl, and climb either Hochwilde or Hohe Weiße along the way, to give just a few examples.

There are many more variations, depending on how much time you have, what condition the routes are in and on what kind of scrambling and exposure you are comfortable with. Some other interesting nearby peaks include Roteck, Lodner and Blasiuszeiger.

The best period is from late spring to early fall. 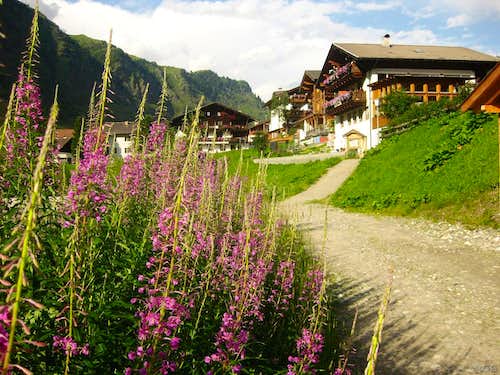 At the western edge of Pfelders. That first building is Pension Rosemarie.
The nearest refuge is the Lodnerhütte. Alternatively, there is the small, unguarded but always open Guido Lammer bivouac shelter, located at the Milchscharte, a little more than a kilometer ENE of the Halsljoch. A difficult hiking trail - but still a trail - on the northern slopes of Tschigat connects these two saddles in less than an hour.

Meran and the many villages in the valleys all around offer lots of options. On the south side of the Texel Group, the Vinschgau valley has numerous villages with plenty of accommodation options, ranging from simple camp sites to luxury hotels.

In winter, Pfelders is a ski resort, and consequently it has plenty of hotels which don't fill up in summer. On my last visit, I walked into town and found a bed in the first place I tried. That was Pension Rosmarie and I had a very pleasant stay. My room was nice and the food was outstanding! Zeppichl has limited options as well. 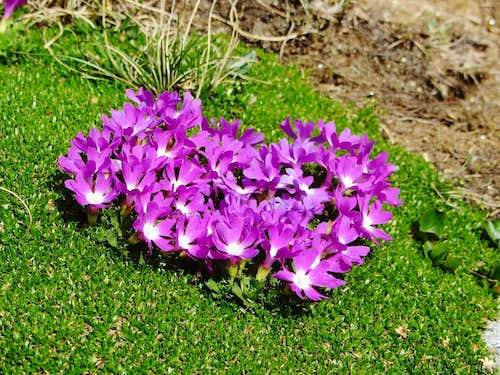 Primula minima on the SE ridge

Panoramic view from western slopes, close to the trail again. The summit is on the far left. The Halsljoch is just out of view, as is the SE ridge.