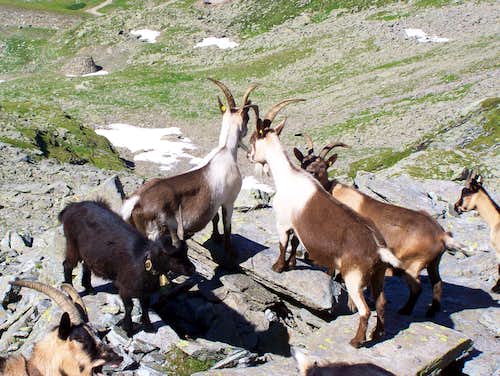 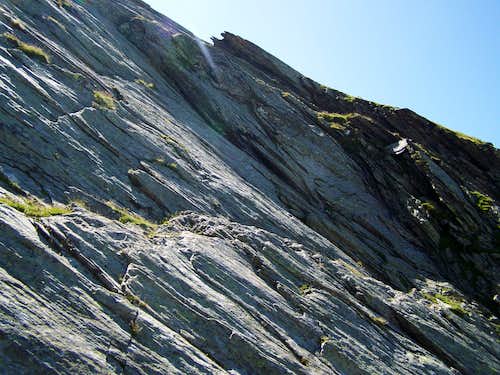 Sefiarspitze is built of schist
Sefiarspitze/Monte Tavolino is the one of the peaks in the Texel Group of the Ötztal Alps in the northern side of the group, above the village Pfelders/Plan. The name of the peak is written as Sefiar Spitze, too.

Sefiarspitze has two side-ridges: one to north, to Karjoch (2411m) and another one to northwest with a subpeak of 2536 m elevation.

The tourist trail called “Tiroler Höhenweg” (High Trail of Tirol) connecting Mayrhofen and Meran/Merano goes along the western and norther foot of Sefiarspitze. For a map showing both the Tiroler Höhenweg and Sefiarspitze in 1:50000 scale, click here.

Though the whole Texel Group is within the boundaries of the Naturpark Texelgruppe, the peak and its neighbourhood cannot be seen as being very much protected. In the village up to 2000 meter the minor grassy areas in the forest are intensively grazed by cattle. OK, the bottom few hundred meters of the valley is not part of the Natural Park. But cattles go into the area of the Natural Park, too. And moreover, the regions above 2000 meter, where there is no forest any more but only meadows – is clearly part of the protected area, and it is also intensively grazed. Not by cattle but by goats. At least these goats are very friendly.

The mountain is built of schist, sometimes with ribbons of marble in it. This can be seen well above 2600 m where there is very minimal vegetation and you can see almost only bare rocks. 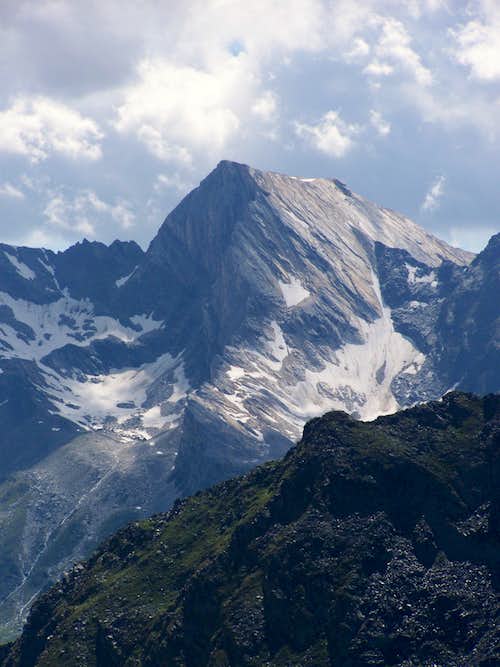 View of the mighty Lodner (3228 m)
Though there are many tourist path in the Texel Group, most of the peaks of the group cannot be accessed on marked paths. But Sefiarspitze is among the peaks that can be “climbed” on marked tourist path.
- If accidentally you are in the village of Pfelders, and you have not more than a half day, then this is the only peak that can be “bagged” in a short time
- No technical difficulty to ascend the summit. The steep parts of the path is built into the form of a stair. Tourist with not so good physical condition can use the cable car, too, to make the route shorter
- The view around is excellent, specifically to the main range of the Ötztal Alps, to the other peaks of Texel Group, and to Jaufenpass and Jaufenspitze. 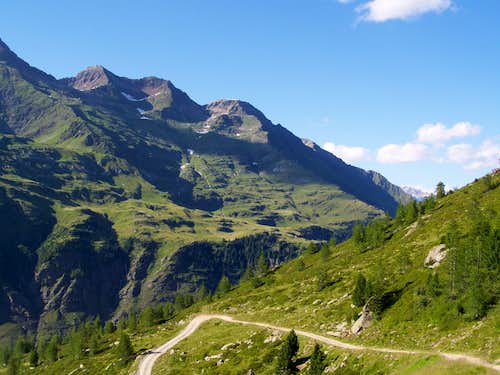 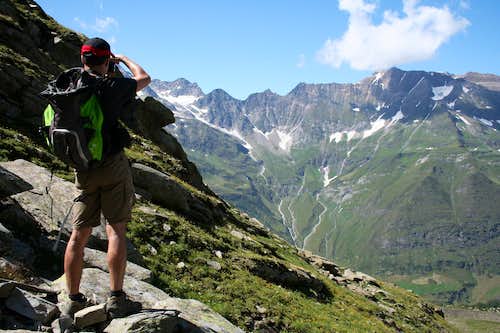 There is a single marked path going up to the peak of Sefiarspitze. This path starts at Grünbodenhütte/Malga Grünboden. The peak is very steep from all directions - other than the northern side where the marked path goes up – so does who don’t want to go up with alpinist techniques should go on this single marked route.

There are several ways how to get up from the parking place to Grünbodenhütte. The hut is in altitude 2020 m. The 380 m difference between the parking place and the hut can be bridged in several ways.
> The easiest is method to get to the hut is to go with cable car. It operates between the 4th July – 27th September, in the hours 09:30-12:00 and 13:30-16:30.
> There is a 4 x 4 road going up from the village to the hut. This road is intensicely used now (2009) by trucks because the cable car construction is just being extended from Grünbodenhütte to Karjoch (2400 m). This work must be completed by December 2009. Though this road is in good condition, serious torist would not use such a road to reach a hut that can be accessed in other ways, too
> The most logical way up to the hut is the marked torist path nr. 5A. It is 1.5 km long and crosses a not very dense forest. The only difficulty with this path is to find the trailhead.
> Another longer possibility to go up to Äuß. Karhütte on path nr. 5, and from there to Grünbodenhütte on path nr. 5B. This route up to the hut is 3 km long.
> The longest route up to the hut starts on the path nr. 6 in direction of SW from Pfelders until it reaches Faltschnal Alm/Malga Faltschnal. From there the route must be continued on the trail called Panoramaweg in eastern direction. This trail has really good panoramic view to the main ridge of the Ötztal Alps, with the best view to Hinteren-Seelen Kogel/Cima d’Anime (3470 m) and to many neighbouring peaks, all of them over 3000 m. This route up to the hut is 4 km long.

From the hut first follow the 4 x 4 road for 1 km. After 1 km turn right, following the red marks. Here you will cross an area where there are huge dams built of stone blocks, in order to prevent the hillside below from the avalanches coming down from Sefiarspitze. After the dams the hillside becomes steep. But the ascent is very easy – the path is built into the form of a stair. The only minor difficulty is that on the shady northern hillside a snow patch can cover the marked path even in late summer. So either you cross the snow patch or go around it, finding your own way. After 2.5 km you get up to a saddle that is in an approximate altitude of 2530 m. This saddle is between the main peak of Sefiarspitze and its subpeak (2536 m) northwest to it. From the saddle you have fantastic view. This is the first moment when the cross of Sefiarspitze can already be seen. From here a further 1 km steep ascend on the marked path and you are up on the peak without any difficulty.

The normal route from Pfelders up to the peak, using the trail Nr. 5B requires 5-6 hours for going up and return. 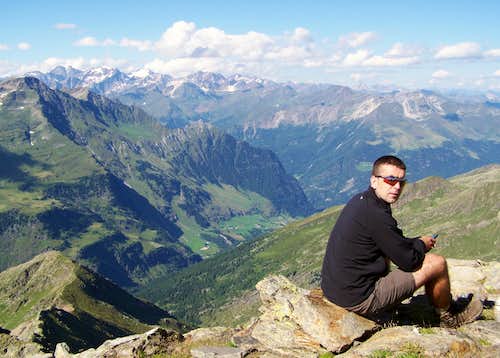 On the summit of Sefiarspitze
A nice metal cross is erected on the peak. There is a metal box equipped onto the cross, with a log book within it. According to the log book a daily average of 10 people climbs the peak.

Difficulty: No technical difficulties in summer and in autumn. No dangerous exposures, except for the peak itself. No special gears are needed. A minor snow field may be on the path even in late summer.

In witnter and in sping there can be avalanche danger.

No special limitations, except for the rules that apply in the Natural Park. Danger of avalanche above Grünbodenhütte 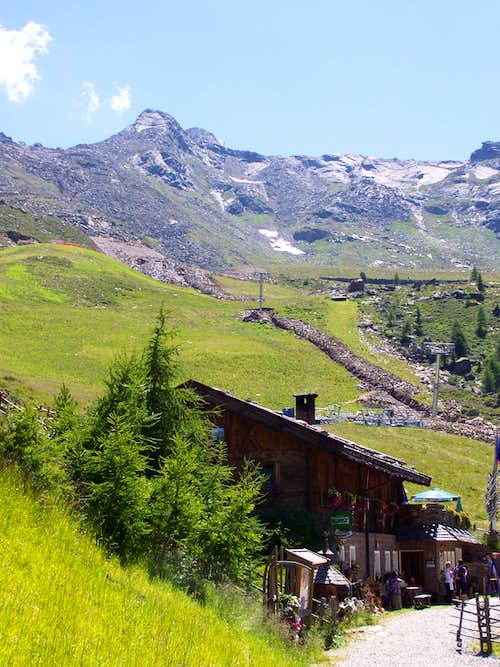 Using information from one of the excellent pages of Gangolf Haub