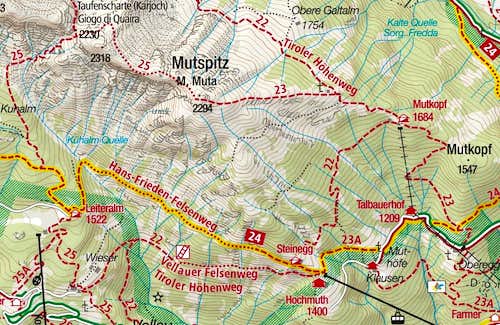 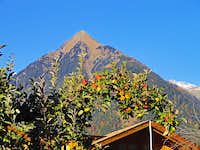 Mutspitz, rising above Merano
Mutspitz / Monte Muta is the summit, rising on the very southeast of Texel group, belonging to the bigger Oetztal group. To find it easy - it rises just north above Merano/Meran, a very popular tourist and spa resort in the upper Adige valley. Due to its easy access and exceptional panorama, Mutspitz is for sure one of the most popular and frequented higher summits of Texel group. During most of a year a cable car brings people on the altitude of 1351 m, then you have less than 3 hours to the top. Very popular is also a round tour, on which you continue from the summit of Mutspitz by the main ridge towards the northwest, reach there Taufenscharte, descend left on Leiter Alm an return to the upper cable car station by the popular Meraner Weg. This round tour is one degree harder than only the ascent on Mutspitz. As we climbed the summit on the very last days of October, without any equipment, and above 2000 meters already snow was lying, we did only the simple ascent.

Lower on the slopes of Mutspitz there are of course also many other combinations for hiking. They can end at the uper station of the cable car, or you can descend all the way down to Tirol village. What we tried, but were not allowed (crowd in cable car), was to take to the upper station mountain bikes.

And the final overview note - not far away from Mutspitz there is the beautiful area of Spronser lakes. They lie in the upper part of the long Spronser Tal (valley), bordering Mutspitz on the northeast. In summer, when days are longer, you can continue from Mutspitz to Taufenscharte, then further on to the lakes and then either return on the southern side over the Hochgangschartl, 2441 m, or descend by Spronser valley and then cross the slopes of Mutspitz, also reaching the upper station of cable car. But the area of Spronser lakes already belongs to the summit of Spronser Roetelspitz / Cima Rossa, 2625 m.

Western views
If the SummitPost lives on, there is no doubt that images of Mutspitz panorama will soon start piling. It is really fascinating. As just at Merano the valley of Adige turns from the W-E direction into the N-S direction, from our summit we can see far towards the south. The fruitful valley (vineyards, orchards) is being bordered by high mountains of Nonsberg group (W) and Sarntal Alps (E). In the nearby Sarntal Alps most beautiful is the view on Hirzer and Ifinger. From behind Sarntal Alps the highest summits of Dolomites are peeking and more towards the south other chains of mountains can be distinguished (Lagorai, Garda mountains). Towards the southwest and west we see some of the highest mountains of Ortler group. More distinguished are those on the northern end of the group (Hasenoehr and others), in the distance Cevedale, Gran Zebru / Koenigspitze and Ortler are also seen. Only on the northern side the distant views are being obscured by nearby higher summits of Texel group. The most beautiful is the view on Tschigot/Cigot and the wild Lodner / Cima Fiammante, but nice are also some other summits.

Tirol castle
Well, this is not a history site, but also as a hiker or mountaineer you can visit this famous castle. It was the ancestral seat of the Counts of Tyrol and gave the whole Tyrol region its name (Wikipedia). It saw its heydays from the times before 1100, when the first castle was built, till 1420, when the administrative seat of province was moved to Innsbruck. Today the castle is nicely restored and is hosting the South Tyrolean Museum of History. From Tirol bus station (in the village) the castle can be reached in 15 minutes. 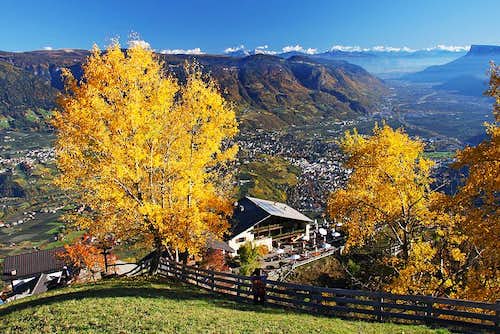 Hochmut farm
See the parent page of Texel group how to reach Merano/Meran. From there, you have the following access options:

1. As said, the most popular and convenient is the cable car to the famous farm of Hochmut (also: Hochmuth), 1351 m. The lower station, 680 m, is in the village Tirol (Dorf Tirol / Tirolo), just north of Merano. You can drive there by car, or use the city transport. See on the web till when in the season the cable car is operating (usually till the end of October). It is said that when there is no crowd, they take on cable car also mountain bikes. That would allow you to buy only one way ticket and on return enjoy a fine bike descent.

2. The second option would be to use the chair lift and then cable car from Algund/Lagundo to Leiteralm, 1522 m. It operates in summer time.

3. Finally, one could start the tour also in the valley of Spronser Tal. But that's quite low, 1070 m.

The trailhead is at the famous farm (and restaurant), near the upper station of cable car, 1351 m. From there we take a comfortable path uphills (towards the NW). In a few switchbacks it brings us to the Steinegg restaurant, 1439 m, where we turn right, leaving the Meraner high path and following the path No. 22. It crosses the slopes towards the NE, going mostly through dense woods and ascending only gently. It's all the time very easy and comfortable (difficulty T2/T1). After 1 hour from cable car we reach the hut of Mutkopf, 1684 m, standing on the long SE ridge of Mutspitz. 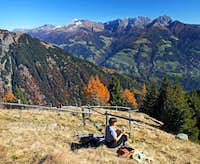 On the SE ridge
At the Mutkopf house (restaurant) we turn left and start ascending by the main ridge of Mutspitz. The path is still broad and very comfortable. It first goes through more and more light woods. Some 200 m of altitude above the hut, the path branches. No. 22 (Tiroler Hoehenweg) continues across the slopes into Spronser Tal, while we go left by the path No. 23 (direction W). It goes in switchbacks, all the time being protected by a wooden fence. Only when reaching above the last trees, also the fence ends. Still, the path is broad, comfortable and well paved by granite plates. Even the steep last part of the ascent hardly exceeds the difficulty of T2. We had some snow on the path, so just the usual care was needed. The last meters climb over some comfortable blocks. From Hochmut it is 2 h 50 min (for 940 m).

Continuing of the main ridge is more demanding, the path is marked as of "black difficulty", so one degree harder than the ascent route. It first follows the ridge, then avoids the last summit by the right and descends into the notch, 2230 m. There you turn left and descend by the path No. 25 to Leiteralm, from where you go by the Hans-Frieden-Felsenweg to the upper cable car station. Also this path has a few protected places. For the whole round tour you can count 5 hours of walk.

From the lower station of material cable way the Meraner Hohenweg (No. 24) goes southwards and then around the Mutkopf up to the Mutkopf house. Then you continue on top by the SE ridge.