Cone Benchmark is the highpoint of the Sheep Creek range. Located just north of Battle Mountain Nevada, it is very visible from I-80 but isn't the kind of peak that takes your breath away. Located near one of Nevada's two major interstate systems, this peak is much easier to get close to than so many of the other Nevada peaks I've dealt with. What is the attraction of this peak you might ask? Prominence, pure and simple, it attracts the ones (like myself) who are interested in the prominence peaks of Nevada that have more than 2000 feet of prominence. This one comes in at #158 on the peakbagger list with 2056'.

There are a couple ways to approach this peak and I'll provide information
from two different ways to reach this summit.

As reported by Dennis Poulin in this peakbagger trip report:
"We approached Cone BM from Battle Mtn and I-80. Zero your odometer after you exit I-80 for NV 305. Go north on Broad St, take a right on Front St, then a left on NV 805 which should be a total of .9 mile from I-80. At 2.9 mile cross the Humboldt River, at 6.9 miles cross the railroad tracks and turn right. At 8.3 miles take the left fork, at 9.5 miles reach the Dymo plant and go straight instead of going into the plant then turn left at the end of the fence. Continue on this road as it east, then north up the Battle Creek drainage, then west towards the microwave towers. At 24.3 miles about .1 mile before the first microwave tower turn right on a faint road. This road is rocky and never gets any better. We drove it for 1.7 miles until we got close to point 6983T on the topo where we parked.

The above describes the way we accessed the mountain and others have chosen to go from the west side. Study maps for ideas on the west side possibilties.
Brad B. wrote a trip report which you can see HERE. As mentioned above, we drove up onto the area that contains several communication towers. Dennis mentioned in his trip report "From our parking spot, we just followed the rolling ridgeline north to the summit. We timed our hike perfectly because thunder storms washed out any plans we had for that afternoon."

It was close to 5 miles roundtrip and including the ups and downs, around 700 feet of elevation gain. The route(s) from the west might entail more elevation gain but perhaps less mileage.

Richard Carey posted a different route HERE.  He gives directions and mentioned that it was 4.2 miles round trip with 1300' of gain.

As of June 2015, peakbagger.com shows 10 ascents of this peak and lists of John adds two others not shown on peakbagger's listing.

None that I am aware of. On our approach, we saw no signage that indicated that we were on private property. Battle Mountain has a BLM office where you could get additional information should you seek it. 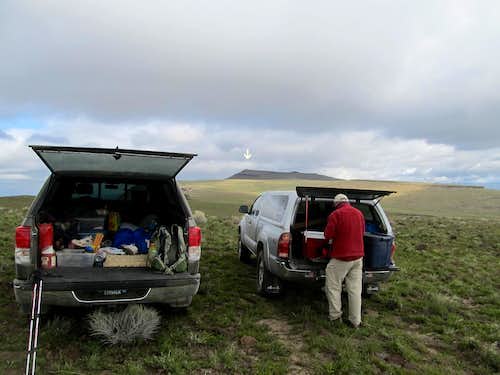 You could probably camp just about anywhere you can find a flat area using the leave no trace ethics. Battle Mountain has several motels and there is a campground at Mill Creek, 20 miles south of Battle Mountain

I've recently added summitpost pages for Six Mile Hill and North Peak. If you are going to be in the Battle Mountain area, those are two more worth thinking about visiting. Lewis Peak (no summitpost page at this time) is another one that is close by.