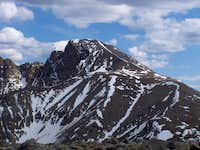 Nevada is the most mountainous state the United States with 314 named mountain ranges. It has a whopping 172 peaks with a prominence of 2,000 feet or more. This is more than any other state, besides Alaska. Nevada also has 8 Ultra Prominence Peaks within the continental United States. These peaks provide a wide range of difficulty. Some are also very remote. Also, if you include 6 error range peaks, that gives a total of 178 peaks that have at least 2,000 feet of prominence. Out of these 178 peaks, only 50 at the time of writing this page, have a SummitPost page.

On a side note, it is probably not likely that someone today could climb all 2,000-foot prominence peaks Nevada has to offer in his/her lifetime. Three summits lie within the Nevada Test Site, a large military test area, that is off-limits to the public. These three mountains are Bald Mountain, Belted Range HP, and Stonewall Mountain (numbers 30, 70, and 95 respectively).

No. 107 Pah Rum Peak has a prominence of maybe 220 feet or so. It is called Pah Rah Mountain. Also the Bald Mountain lat-long shows it deep into California, not in its actual location.

Thanks, I did have the Coordinates incorrect for #82, Bald Mountain. It's updated now. Thanks for catching that. However, Pah Rum Peak and Pah Rah Mountain can be easily confused. Pah Rah Mountain (8,240 ft) is about 2.7 miles North of Virginia Peak, which you just posted. Pah Rum Peak, #107 on the Prominence List, is just over 13 miles North of Pyramid Lake. You will notice this on any good Topo Map Program such as DeLorme, Memory Map, or also on PG 46 of the Nevada Road and Recreation Atlas. I apparetnly didn't pay attention to detail when I made this page and put the Map Coordnates for Pah Rah Mountain instead of Pah Rum Peak. It is now fixed. Thanks again for catching these small errors.

#163 links to Dogskin BM, not Dogskin Mtn. Dogskin Mtn is about 2 miles south of the BM and has no SP page. Dogskin BM is NOT the P2k.

Can you link Mount Siegel to table? While the page features Siegel and Galena, it should be linked as a prominence peak: http://www.summitpost.org/mount-siegel-and-galena-peaks/620050 Also, you might want to update the list of mountains with an SP page if you didn't count Siegel before. Siegel page was published in 2010. "Current Total with a SummitPost Page: 160; 167 have photos Newest Mountain Page: Hannan Range High Point"