The Toquima Mountains are one of the countless giant ranges that populate the Great Basin interior of central Nevada, and mighty Mount Jefferson tops the range with a summit elevation approaching 12,000 feet. Overshadowed by the more popular Arc Dome to the west, Mount Jefferson sees its share of hikers due to its gigantic prominence of over 5,800 feet and its status as the highest peak in Nye County.

There are actually three summits comprising "Mount Jefferson". The southernmost is the highest, and the destination given on this page. The other summits can be reached by some sketchy trails and easy cross-country, once you have surmounted the southern highpoint.

A combination of old road, trail and cross-country makes for a straight-shot route to the top. Most people will start at or near "Jefferson Summit" as marked on the map, which is where a forest road achieves the ridge. From here it's about 5.5 miles and 3,000 feet up to the top. 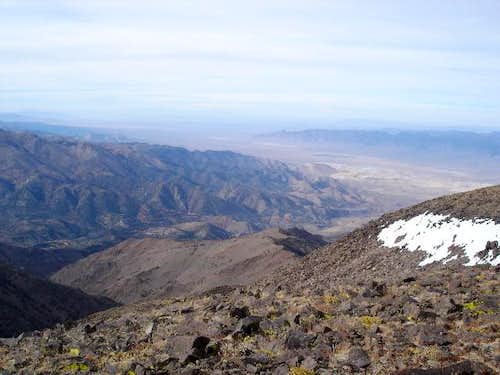 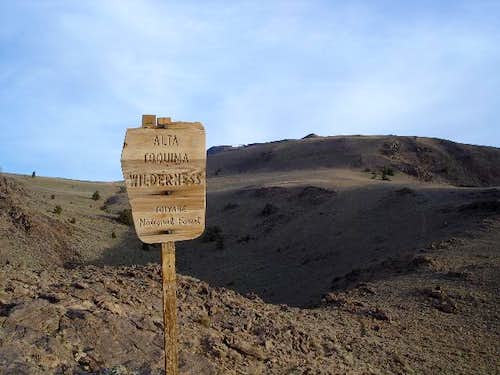 First, get yourself to Tonopah, roughly four hours north of Las Vegas on US-95. Be sure to top off the gas and get supplies here because this is it for civilization! From Tonopah, proceed east on US-6 about six miles to NV-376. Turn left (north) and continue about 13 miles to the Belmont/Monitor Valley Road, which heads northeast. This road is paved but in poor shape- some sections are pretty chewed up and it appears the state does no maintenance on this road.

Roughly 25 miles later, the road leads to the interesting ghost town of Belmont, set in the southern foothills of the Toquimas. Belmont used to be the Nye county seat and a major mining community. Today it is home to about a dozen people, including one place offering a Bed & Breakfast. For mining and historical enthusiasts, many of the old buildings are still standing. However, there are no services as such in Belmont.

Staying on the main road (now called Monitor Valley Road), leave Belmont and head north another 5 miles or so on a wide, good dirt road. Turn left onto the Meadow Canyon Road and proceed west into the range. Although the road was reasonably well graded, it is narrow (beware of oncoming cars) and in some places, prone to small washouts and ditching. After 8 miles on Meadow Canyon Road, come to a significant Y-junction.

I chose to turn left and follow a relatively poor-quality road about another mile to top out at "Jefferson Summit", which is really a pass at about 8,000 feet. At this pass, a two-track wriggles off to the north on up toward the summit, which is visible. Those with a high-clearance vehicle should be able to get in a little bit (maybe a mile), where some flat spots and trees offer a good place to camp.

I did not need 4-wheel drive but did need high clearance for the last mile and a half after the Y-jct. I understand that if one turns right at this Y junction, there is a camping area and a trailhead that also leads to the peak. The advantage of starting from Jefferson Summit Pass is that about 1,000 feet of vertical is removed.

Update -See the comments made by famartin below which is from his October 2014 visit.  Also, Kathy Wing reported this information on the road conditions in her August 8th, 2014 visit: "Road 10 is in great shape to the junction with 208, but that last 1.5 miles to Jefferson Summit is in bad shape and looks like it got a lot of damage from recent rains. I drove it and then another 1/2 mile past Jefferson Summit in a stock Toyota Tacoma with 4WD, but I scraped bottom a number of times driving the 2 miles from the junction with 208 - thank goodness for skid plates.

The road is fairly good for a short while after where I parked, but it soon deteriorates. I was parked in a nice place to camp; so that's where I started out from in the morning. I hiked about 9 miles round trip with about 3250' gain/loss." Also from August 2014 Mitch Brown said "Road to Jefferson Summit is bad- I have off-road truck but would recommend off-road jeep or ATV if you have one."

Along the same line, David Porter indicated that the road had deteriorated on his 9-27-14 visit "The road from the Y going to 'Jefferson Summit' (a pass) has deteriorated significantly form Bob Sumner's description. 4wd, high clearance suggested." Be aware that the road conditions can change. Others have used the longer hike from the Pine Creek campground to attain the summit as noted by Gerry Pennington in his 7-29-15 trip report reproduced in part here as follows "used the Pine Creek Campground for the trailhead due to the Meadow Canyon road condition. A good trail (11 miles round trip)leads to the talus slope just below the south summit. After a short climb I enjoyed some spectacular views in all directions." 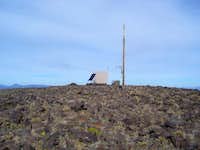 Usually late May to about October is the best time. This part of the Great Basin is usually very dry but summer thunderstorms (Jul-Aug) could be a concern.

This is probably one of the most popular peaks in this part of Nevada. Peakbagger.com's climbing log shows well over 150 climbs to the summit (see here) as of late July 2015. There are many helpful trip reports located on the peakbagger page for this mountain and it has been climbed in all seasons

There are no fees or permits; the land is National Forest. Winter snows may shut the road completely.

Contact the USFS station (number below) to inquire about the camping info for Meadow Canyon. I simply car-camped up on the ridge, where I had everything to myself!

Pine Creek Campground - A nice campground that some have used as a trailhead/base camp for hiking to the summit of this mountain. I'm hoping that someone who has done the hike might add a route page for it under the route section.

This number can get you started: The USFS Tonopah District Ranger Station:

Add Shoshone Mountain to your visit

If you are simply interested in county highpoints, then ignore this blurb. However, if you are into chasing the Nevada prominence peaks, consider taking the time to do Shoshone Mountain, just to the south of this one. See the summitpost page for this one HERE

Also look at Bob Burd's trip report (linked below) in which he incorporated Shoshone Mountain with his visit to South Jefferson. This is truly a great area of Nevada and there are other special peaks nearby that are prominence peaks. Wildcat, just to the north and Table, to the east (both have summitpost pages) are good ones to consider.

Good info, Dean. When I created the page I wasn't heavily into prominence stats, but I will add that info to this page (and my other NV pages).

Ascended 10/19/2014. Note that the road is severely eroded with deep ditches and large rocks from the "Y" in Meadow Canyon up to Jefferson Summit. Worst ditches are about a quarter-way to halfway up, while the worst rocks are near where it emerges onto the saddle. While its still ok for an off-road pickup or jeep, I wasn't willing to take my (rented) SUV up there. Also, the four-wheel drive road leading north from Jefferson Summit divides multiple times, but doesn't deviate much, so you end up with several parallel tracks going towards the summit in a few places. The road fades out about where I presume the wilderness boundary is, but the sign marking it seems to have dissappeared (didn't see it, though did see a wooden post which I suspect once held it). From there, the trail seemed reasonably well marked given the remote location, especially in the areas where the ridge narrowed. In the wider flatter sections of the ridge, the trail tended to fade out, but usually the rock cairns marking the best route were easy to find. Old building/antenna/etc at summit. Could not locate the register under any of the several piles of rocks near the high point, but did manage to locate a "terracache" (probably a geocache).

If there was a sign for Meadow Canyon Road it is no longer present. The road at the 5 mile mark north of Belmont that might have been Meadow Canyon Road was nothing more than a two wheel rut in the grass that automatically required high clearance as soon as you left the broad dirt road.

NF-010 (AKA Meadow Canyon Road) is closed about 3 miles from Monitor Valley Road. A major flood came through and severely damaged much of the road in the canyon. Tonopah Ranger District said it will get fixed, but they have many roads damaged from this spring's storms.

Thank you for the update. I was thinking of doing Jefferson come Labor Day, but this closure changes things...