Wildcat Peak, now that is a name that gives you a warm fuzzy feeling (especially if you are hiking alone at night). To make it even better, it is almost dead center in the middle of the state of Nevada. Wait, there's more.....it is 45 miles of dirt road off of the pavement of what is known as the loneliest highway in Nevada, US 50. In other words, this one is way out there but well worth the effort to get to if you are into chasing mountains that have over 2000 feet of prominence. With almost 2500' of prominence, this one is ranked the 102nd most prominent peak in the state of Nevada and its lofty height of over 10000 feet is another plus to consider.

This mountain is part of the Toquima range and is north of the more well known Mount Jefferson which is the highest mountain in the range. Other notable peaks found in the range are Spanish Peak (10,746 ft), and Shoshone Mountain (10,907 ft). In the northern section of the range are Wildcat Peak and White Rock Mountain (10,156 ft). It would be well worth it to spend a week in the area just climbing these mountains.

The Monitor Valley itself is an interesting area. For the truly adventurous, this is a great place to explore. The old Potts ranch is home to a neat hot spring (see links below) and the only active looking ranch that we noticed on our long drive down the valley was the Monitor Valley Ranch. The history of the area is very cool too and I'll add more as I discover more about the area.
Consider a visit to Belmont to the south a must see place, well worth the time.

You can approach this mountain from the north via the east side road found in the Monitor Valley, from the South by the same road via Belmont or from the west. We approached it from the north and exited to the south.

Regardless from what direction you come from, use this following GPS waypoint (nad 27) to help you locate the correct turnoff.
GPS Turnoff to Mill Canyon: 38.9936 116.6997 Elev 6827
On the topo map, it shows Box Spring nearby and a BM 6827. The road is rough and requires high clearance. 4 WD wasn't necessary at our visit. It hooks up with another rough track at the mouth of Mill Canyon. Follow the better road in Mill Canyon to its end at 39.0101 116.8039 Elev. 8100' On the Benchmark Nevada atlas, the road that you turn off of the Monitor Valley road is shown as 348 but it has another sign with 5 numbers in it with 44 the first two numbers.

From Tonopah, head for Belmont. It is about 34 miles from Belmont to the turnoff for Mill Canyon.

From Austin over Pete's Pass, about 46 miles.

There appears to be a road over Northumberton pass that would connect you to highway 376 but I know little about it at this time. On my next trip, I'll be giving that road a shot.

From the Pine Creek Campground, about 18 miles.

This mountain hasn't been visited by too many prominence peakbaggers but it does get some activity from hunters and locals who come up from the west. The register had quite a few signees from Round Mountain and another town located to the west. 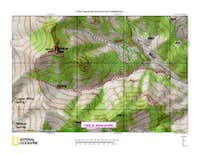 Eastern Mill Canyon approach:
Since we came in from the east via Mill Canyon, this is the route I am going to provide.

Our route from the east went up the main drainage that is south of the peak and then reached a saddle where we turned north and followed to the summit.
It was brushy at first until we reached the saddle (a better route would be to stay high on the south side of the drainage) and then basically class 2 from the saddle on up, staying on the ridgeline to avoid more brush initially. Ken Jones published his GPS track on peakbagger.com and I'd suggest following the southermost aspect of that track in both directions. The final thousand feet was brush free and there was a short class 3 section just before the summit but nothing technical.

Other routes:
I did note in the summit register reference to the fact that others had come up from the west and one from the Northumberlin mine area. I can offer no details but would suggest that if you were interested in approaching this from the west, some good map study might be useful. Any other routes done by others would be appreciated input and I'd welcome you to put that information on the route section to the left.

The register we found was placed in 1987 by Gordon MacLeod and Barbara Lilley. We found that Andy Zdon had signed in as well as several other locals during the late 80's and 90's. The first prominence peakbaggers showed up in the register in June of 2003 when John Vitz and Barbara Sheets signed in but it was 8 years later when Brad Boester signed in July 2011. Then in August of 2013 Ken Jones and I signed in, followed by Dennis Poulin in mid November.

This peak might be climbable at any season of the year but due to the possibility of snow, winter might not be a great time to make a visit to this area. Rain could turn some of the roads to be impassable at any time of the year so pay attention to the weather in this area.

There are two campgrounds in the area that i know about:
1. Pine Creek Campground. The link really has a lot of good information about how to
find your way to it

Animal Traps: A later visitor in the autumn said he nearly stepped in a trap that had been placed on the trail he was taking and said he also saw several others as well on the route up the drainage that Ken and I took. So be aware of the possibility that you need to be aware of where you are stepping. Ken and I saw no traps but that doesn't mean they weren't there. Who placed them and what they were hoping to catch is a question mark but I pass this along so be aware. 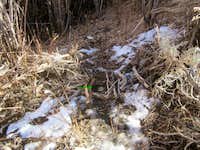 Trap on the trail 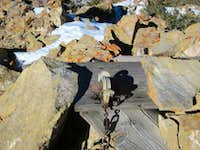