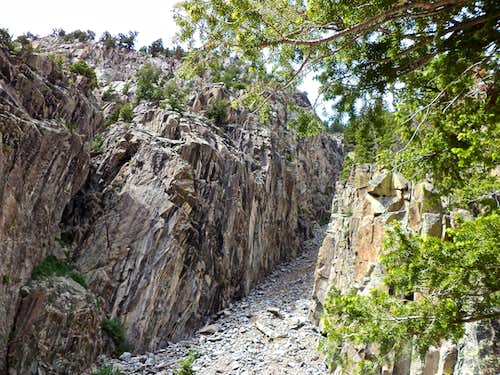 View into the canyon from the top of the canyon wall at the entry.
Cracked Canyon is located near Telluride, Colorado. It is basically connected with Ophir Wall and offers a great quality climbing, mostly traditional style with a few bolted lines, which require additional gear placement. The descent is via rappel from slings around trees or fixed rap anchors. The routes range in difficulty from 5.4 to 5.13, with an emphasis of 5.7 to 5.10 range. The style are some easier slabs to fierce overhanging cracks. Hard rhyolite makes holds and cracks very solid. There are almost 100 routes within this deep cliff lined canyon. It is one of the most popular destinations at Ophir.


The climbing is at fairly high elevation, so summer storm can move in very fast. The approach involves an unpleasant scramble on large boulders, but the rock and the quality of climbing here make up for it.

The orientation of the canyon makes it possible to find shade at any time of the day, and it is well protected from the wind.

Some say that western slope of Colorado has a really bad rock, but there are several noteworthy crags with top notch climbing that rivals Colorado finest, and Cracked Canyon is one of those examples.

Cracked Canyon is home to many fine single pitch outings, and the nearby Ophir Wall with climbs up to 900 feet tall can extend heights. The surrounding scenery is stunning, and the nearby Telluride offers great cuisine and entertainment.

History of Climbing at Ophir/Cracked Canyon 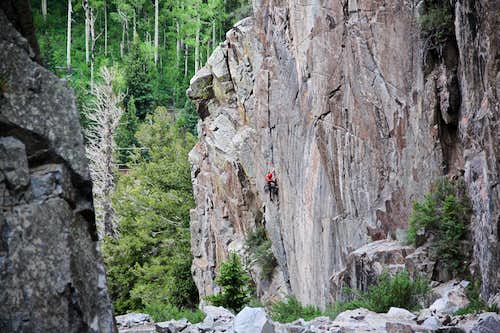 The San Juan Mountaineers did some rock climbing in the Telluride area in the 1930s as they explored the nearby craggy peaks in the Wilson group (Wilson Peak, Mount Wilson and El Diente) near Lizard Head Pass. The Ophir Wall was first climbed, probably in the 1950s or early 1960s, via the so called Post Office Crack, directly behind the tiny post office.

In 1969, David Farney closed his Ashcrofters school in Aspen and moved operations to the Skyline Ranch near Telluride. One of his guides was Henry Barber of Boston, who began explorations of the Ophir Wall, partnering with Greg Davis. Barber made first ascent of some superb Ophir Wall lines, including the top to bottom dihedral system Hot Wee Wee.

in 1973, Bill Kees, the original Ophir Wall Bum and the goodfather of Telluride climbing, added classic routes such as Orange Peel, with Jack Koffman. This one pitch, 5.10 crack was hidden away in what would be known as Cracked Canyon.

In 1977 some strange news hit town, Royal Robbins moving to Telluride? As the Bumbs sat on barstools in the evenings and on porches of old Ophir cabins,images of rocks climbs flashed before their eyes. They knew the Californians would soon be exploring their crags, and they resolved to really get after it.

In the summer of 1978, Chris Vandiver joined Robbins in Telluride and the Rockcraft climbing school opened for business. That year, the total Telluride route count doubled. Especially popular were the short, steep cracks of Cracked Canyon, where many excellent routes were climbed, mostly by the Californians. Particularly painful for the Ophir Wall Bums was the first ascent of Javelin, the best looking crack in the Cracked Canyon. Strenuous, overhanging, and attempted on several occasions before the California invasion, it was led with an easy by Vandiver, and then by Royal Robbins.

The demand for climbing instruction in Telluride was limited and the Rockcraft school would last but a few years. Kees and others had much better success putting Telluride on the international climbing map by putting together Mountain Film in 1979. The first film festival on continent devoted solely to mountaineering.

In the summer of 1980, quite a collection of name climbers was gathered in this funky mountain town in the San Juans. Among them were the young California couple John Long and Lynn Hill. Lynn made the first ascent of Ophir Broke, solid 5.12, which was in that time the hardest crack climb in Colorado and even Yosemite had only a climb or two that were harder.

Location: 8 miles southwest of Telluride, just off Colorado road 145. Turn into a small town Ophir, follow the main road, pass the tiny post office building. Park 120 meters past post office on a small pullout parking lot. Look for a small climber's trail up the steep slope among the trees. Follow this trail to the start of large boulder/talus section. This part of approach is unpleasant.

Approach Cracked Canyon by parking in roadside pullouts directly below the canyon. A rough access trail walks up through the forest and onto the steep talus slope below the canyon. Take care not to tumble unstable talus onto those below. More loose talus fills the steeple angled canyon floor. Again, use caution not to avalanche boulders down.

Allow 15 to 20 min to the entry of the canyon, add at least 10 to 15 more if planning to go all the way to the top. I think it is easier to start climbing at the start of the canyon and gradually move up.

Rock Type: Rhyolite
Height: 60 to 150 feet, most around 80 feet long
Climbing Style: traditional with some bolts here and there
Gear Suggestion: full rack with some large cams (there are several off width cracks)
Descent: rappel, mostly from fixed anchors or slings around trees
Land Status: USFS 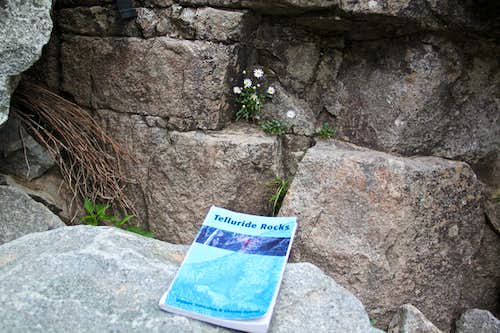 Telluride Rocks guidebook
There are no fees. Parking and climbing is free.
Nearby climbing shops and services are in Telluride. (see the links below - external links)
Guidebook: Telluride Rock by Charlie Fowler, 1990

Summer and Autumn. Expect snow inside the canyon in the spring, and be aware of summer thunder storms in afternoons.

Free camping is available in the small roadside meadow west of the Ophir Post Office and in the San Miguel Canyon below Ilium along Forest Road 625. Otherwise, head a few miles north on Colorado 145 to Sunshine Campground or south to Matterhorn Campground. Bring your own water if you camp at the wall base. The river water is contaminated with mine tailings.