"Ebright Azimuth" is the name and location officially given for the State Highpoint of Delaware. Although not much of a hill in the traditional sense, and probably not a destination for most peakbaggers, Ebright Azimuth deserves its rightful place on SummitPost by virtue of being one of the 50 State Highpoints. Without this highpoint page, this website would be incomplete in regards to pages dedicated to the State Highpoints list. This page has been created and updated to include pertinent information for this highpoint.

The seemingly unusual name is derived from its location along Ebright Road, located only approximately 500' horizontal distance from the Delaware-Pennsylvania border. Officially recognized as having an elevation of only 448', Ebright Azimuth is the second-lowest State Highpoint (only approximately 100' higher than Florida's State Highpoint, Britton Hill). The highpoint is a virtual drive-up and can be visited year-round. 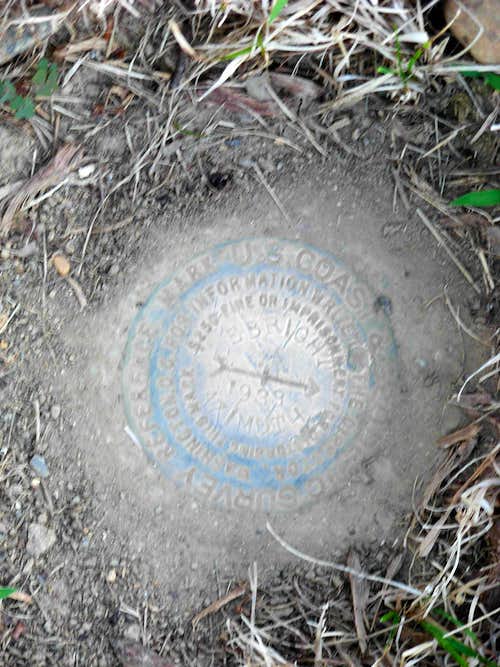 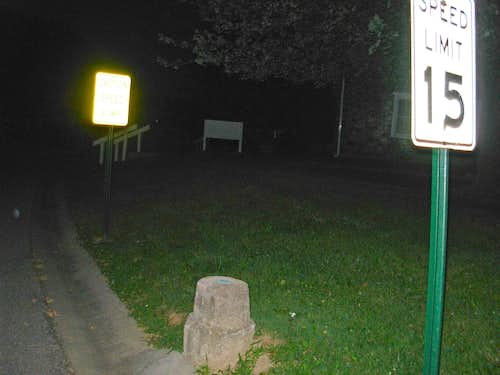 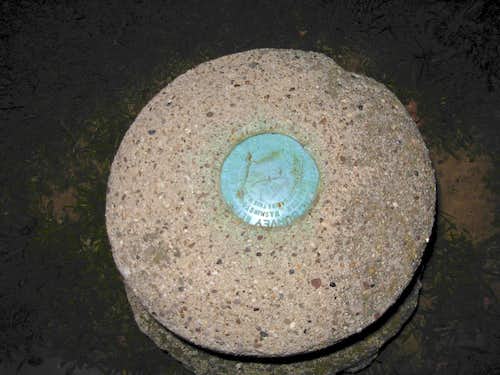 During 1985, the National Geodetic Survey and Delaware Geological Survey determined the USGS Benchmark disk located approximately 50'-75' left of the now-posted "Ebright Azimuth" highpoint sign has 447.849' elevation. However, the same survey determined a higher point of 450.949' elevation in a nearby mobile home park, approximately 300 yards west of Ebright Azimuth. As described during November 1990 by William S. Schenck, who was Coordinator of the Cartographic Information Center for the State of Delaware, the officially-recognized highpoint of Ebright Azimuth "is not the highest point in Delaware. It is the highest monumented spot in Delaware." 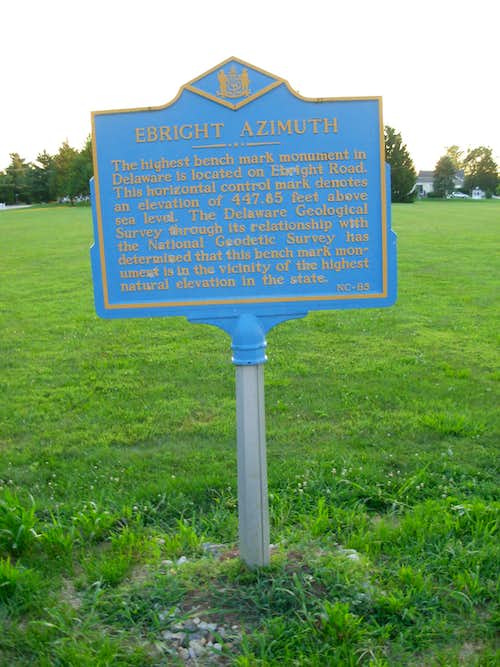 Delaware recognizes its highest point as the location of the monument sign and USGS Benchmark disk along Ebright Road. As such, that location ("Ebright Azimuth") is the only location necessary to visit to claim a successful completion of the Delaware State Highpoint. Some summiters also might choose to explore the adjacent small field, which is currently allowed.

The Queen of Ebright Azimuth

Doreen Kupchick, a local resident, is dubbed by many people to be the "Queen of Ebright Azimuth." This is largely due to her efforts to preserve and recognize the State Highpoint location, as well as her hospitality to summiters. 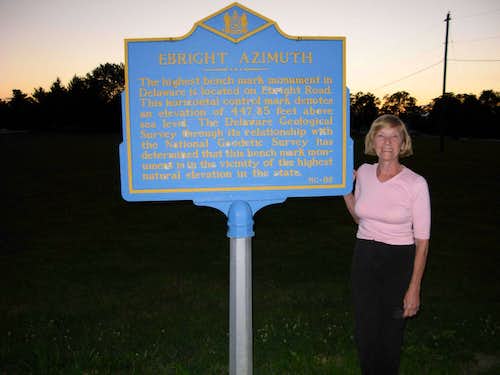 For many years, Doreen has lived in a house across the street from the recognized highpoint. Over time, she noticed seemingly random people tromping around the area of what is now called Ebright Azimuth, looking at the ground and maps. Eventually she became curious enough to inquire as to why people were so interested in the area. When she discovered that location was possibly the highest point in Delaware she made an effort to visit with any prospective summiters she saw there. Later, she began keeping a summit register log in her house for people to sign. 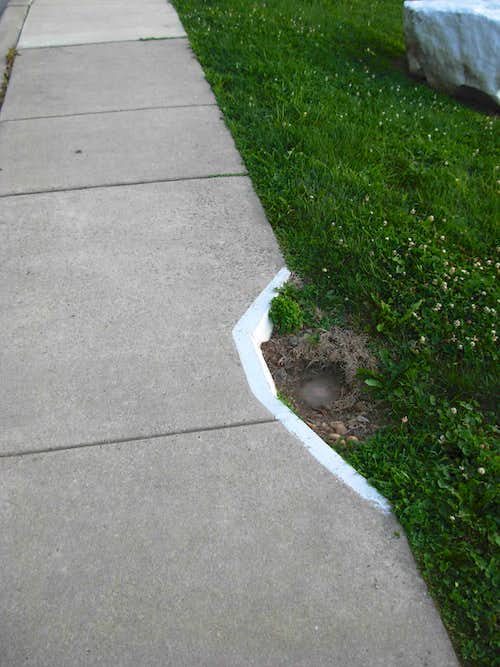 These unselfish acts of hospitality and preservation help cement Doreen's stature as the Queen of Ebright Azimuth. Visitors are encouraged to try to find Doreen during their visits; it can make the entire trip worthwhile.

1) Drive north along I-95.
2) Take Exit 8 for Highway 202 (Northbound).
3) After 4.9 miles, turn right onto SR-92 East / Naamans Road.
4) After 1.1 miles, turn left onto Ebright Road.
5) After 0.6 miles, reach the street intersection with Ramblewood Drive. Find a legal place to park alongside one of those roads. Walk to the highpoint monument sign and USGS Benchmark disk located near the intersection of Ebright Road and Ramblewood Drive.

NOTE: Doreen Kupchick, who has the summit register, lives near the corner of Ramblewood Drive and Sturbridge Drive. She can see the highpoint from her home. Please be respectful of Doreen and other local property owners.

If driving along I-95 during the approach, expect to pay tolls.

Please respect private property rights. The Highpointers Club and the State of Delaware want summiters to only attempt reaching the monument sign at its neighboring USGS Benchmark disk along Ebright Road. Doing so is recognized as a state highpoint completion. 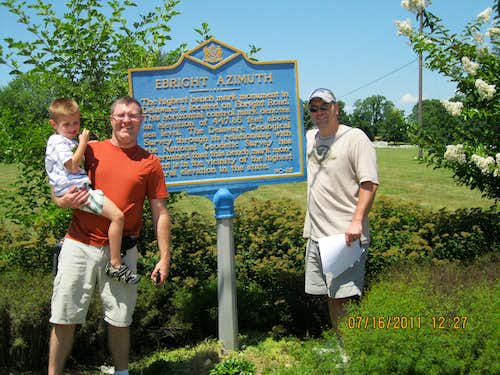 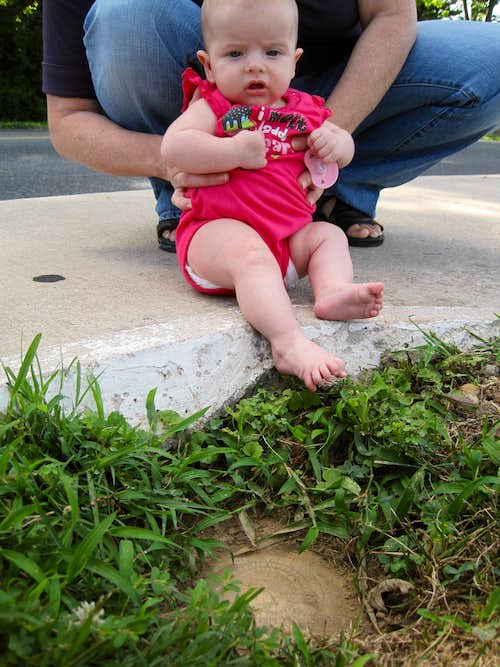 The Azimuth is what it is. There are some really nice trail networks nearby that offer great trail running and mountain biking opportunities. They're pretty mild for hiking, but are ideal for running, riding, or equestrian. The Woodlawn Trustees trails are just a few miles to the west, on the opposite side of Rt. 202. See http://www.bikekinetix.com/t_de/de_county/woodlawn-trustees.php for a trail map. This is private land, but they actually encourage non-motorized recreational use on their extensive trail network. The terrain is pleasantly rolling with a mix of woods and fields. Just south of the Woodlawn Trustees land is Brandywine Creek State Park. This has another good trail network, including some interesting bluffs along the creek. See http://www.bikekinetix.com/t_de/de_state/brandywine-creek-trails.php for a trail map. Believe it or not, there is climbable rock in Delaware. There is a top-roping area with 60-80 ft of vertical further south along the Brandywine. This is in the Alapocas Run Park, on the north bank of the creek, within the Wilmington city limits.

The HP sign is on the *same* side of the intersection as the U.S. Geological disk/marker. The sign was moved there a while ago. Also, there were originally at least three U.S. Geological disks/markers for Ebright Azimuth: The "main" one along Ebright Road, one along a nearby private road, and one underneath a mobile home.

Neat place within a few hundred yards of the high point: "Hideaway Bar and Grill". From the high point sign going south, take the third right onto Forge Ln. It's a pleasant little place tucked just into the neighborhood off of Ebright Road. Nice folks, good food and beverages.

So they have made a real nice area for the sign. There is a bench, etc. However, the disc is much harder to find and not nearly as pretty as the pictures show. The cut out in the sidewalk is barely noticeable as the paint is almost completely worn off. Additionally, when I went there the disc was covered in mud, making it even harder to find. From the sign, walk towards the two large painted rocks and it is on the right side. It is now at a 3 way stop sign that is very busy. I tried to take a photo when no cars were around, but no luck. Also, don't expect much nature. You are at the entrance to a suburban neighborhood and close to a trailer park.

A Visit From The Police

I went to this high point in the Fall of 2013, arriving just about dusk. This was my 19th high point, and I have a tradition of taking a photo of the USGS marker at each one (if it has it). This usually involves laying on the ground and taking a selfie. I didn't have a phone with the reverse camera feature back then, just a regular camera. I laid there quite a while because every shot I took was off center, cut off my head, or something. I had just gotten the good shot when a police car rolled up and the guy asked me what I was doing. He said there had been a report of someone passed out on the sidewalk!