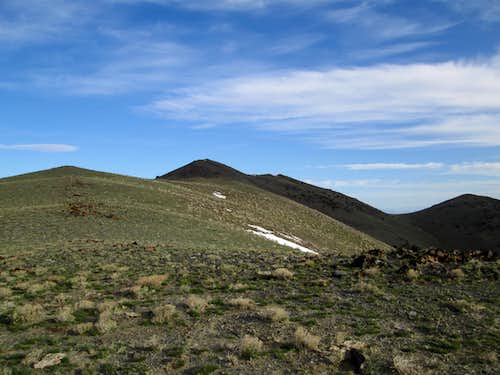 The Eugene Mountain range sits just north of I-80 between Lovelock and Winnemucca and is home to a lot of mining claims including a large tungsten mine at the base. Getting to the top of the range (the highpoint) is of interest to peakbaggers like myself because with over 3300' of prominence, it is the 51st most prominent peak in the state of Nevada.

The range is readily accessible from I-80 and if you have a high clearance 4WD vehicle, you can get relatively close to the high point of this range due to mining roads that were constructed to access some mining activity that occurred on the flanks of this range.

This is a range that has little in the way of tree coverage and is really mainly brush covered and the contours of the peaks are relatively gentle.

From either east or west on I -80,take exit 149 and go across the frontage road and head directly to the range on NV400 towards a tungsten mine (about 8 miles on paved road) which is noted in the Nevada Benchmark map book. The easiest way is to drive right up to the gate at the tungsten mine and then turn right on a dirt road where you will see signs directing you to go right onto a dirt road.One of the signs is for Pole Canyon which is where you are heading. Follow this dirt road a little over a mile to where it meets a couple other roads and turn left. Follow this road towards Pole Canyon for close to 1.5 miles and then take the left fork into the canyon itself. Drive up this road as far as you can go or until you reach the saddle on the south ridge of the Eugene Mtns. The last switchback up to the saddle is at a sharp angle which will require you to utilize a broad spot in the road to turn around to access this road. For some, it might be wise to park here and hike up this road to the saddle. See the GPS track provided by Dennis Poulin who found it necessary to hike up the road to the saddle. During our visit, we were able to drive the road but if there had been snow on the road, walking it would have been smarter. 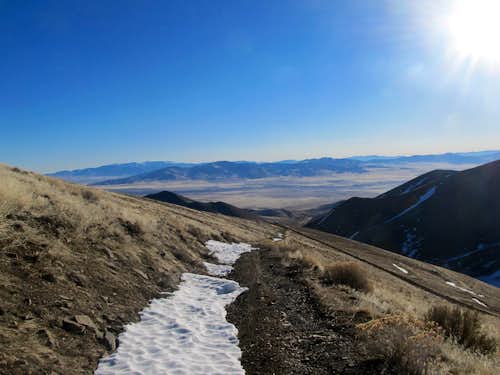 Road up from last switchback - snow will be a stopper 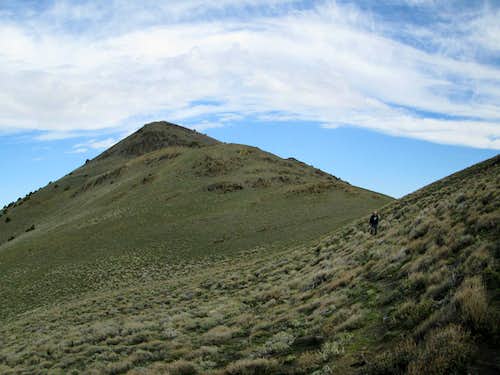 Path on west side

From the saddle, you can hike up the jeep track to a radio structure or you can look for a use trail that traverses around the west side of the small hills. You can see this trail on the GPS track provided by Dennis as mentioned above and it would be the left side of the track since he went over the top of the hills on the way to the summit. Total distance from the saddle and back was less than three miles and if you take the traverse, not much more than 500 feet of elevation gain. 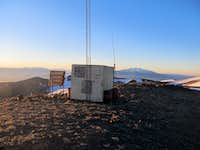 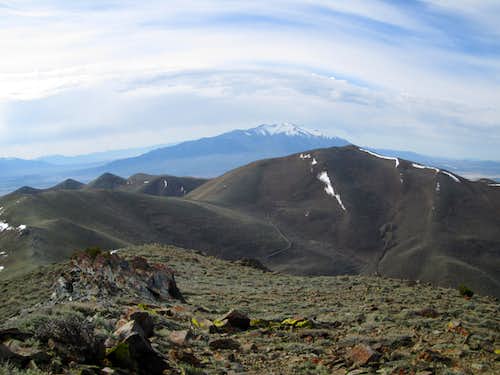 Looking back at the saddle
None that I am aware of. 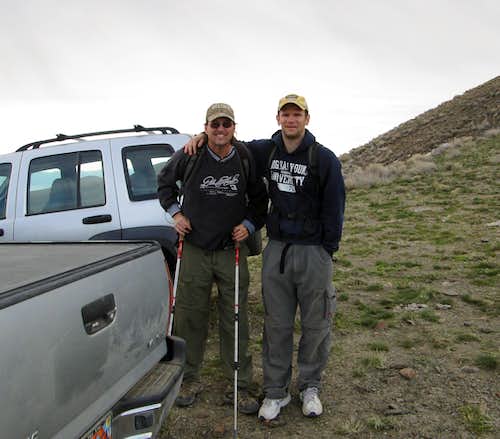 Al and Brett at the Trailhead for Eugene

It is probable that this mountain could be climbed anytime of the year. It should be avoided during rainy times and when snow blocks the roads up high.

We car camped near the mine, just off the road. There is very little traffic to contend with but there are many places you could car camp in the canyon itself and I remember seeing a couple spots on the way in that had fire rings.
Motel facilities are nearby in either Lovelock or Winnemucca. 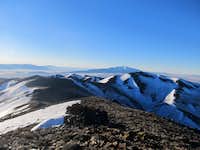 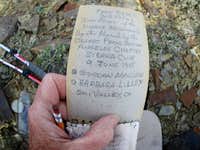 
As you can see from the pic, the register was placed in 1995 by Gordon MacLeod and Barbara Lilley. Since then (prior to our visit), there had been only a dozen others who have claimed an ascent of this mountain. Of course, with our visit, the number jumped to 15. Still, a total of 17 people in almost 20 years shows how light the visitation is. Yes, a few hunters and locals had signed the register but this list pertains to those who are actively chasing Nevada prominence peaks.

Seven more have visited this one since my visit so its popularity has increased thanks to information found here at summitpost and at peakbagger.com